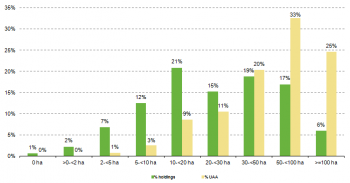 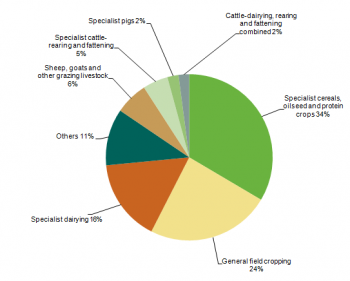 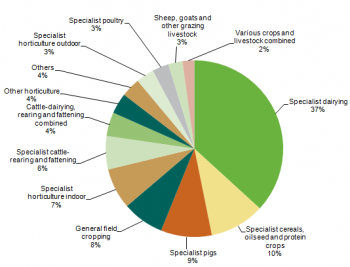 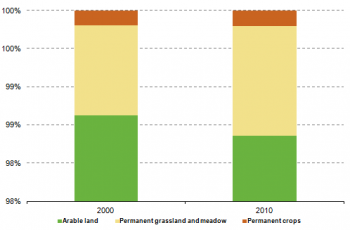 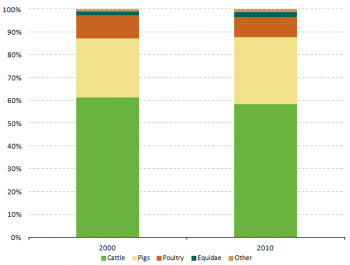 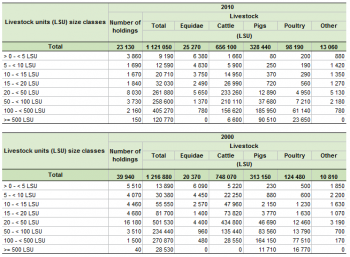 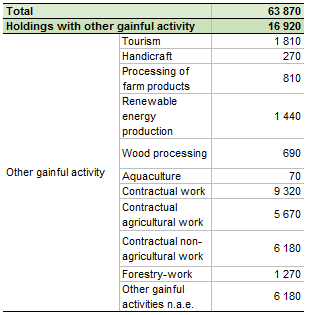 An opposite tendency characterized the utilised agricultural area (UAA), which increased by 3.3 % over the same time frame: it grew from 2.2 million ha in 2000 to 2.3 million ha in 2010. Nonetheless, in 2010 the Finnish UAA accounted for only 6.8 % of the whole territory of the country, the smallest percentage within the EU-27, right after the one recorded in Sweden (6.9 %).

As in Finland the UAA increased while the number of holdings fell, the average size of the farms changed within the 2000-2010 time frame: it grew from 27 ha in 2000 to 36 ha in 2010 (+31 %). This growth suggests that small holdings ceased their activity as they were incorporated into bigger ones – a common tendency already observed throughout the EU-27.

In 2010, the average size of the Finnish farms was one of the highest among the EU Member States, right behind the one recorded in Sweden. Furthermore, as the decrease rate recorded for the Finnish population matched the growth displayed by the UAA, the average UAA per inhabitant did not change within the 2000-2010 time frame, indicating the value of 0.43 hectares per inhabitant both in 2000 and 2010.

Regarding the animal livestock expressed in livestock units (LSU), Finland recorded the lowest value among the Scandinavian countries in 2010: 1.1 million LSU. This value represented an 8 % decrease compared to the FSS 2000 figure (1.2 million LSU) and a reduction of about 96 000 LSU in absolute terms.

A closer analysis of the population of agricultural holdings confirms the tendency for the smaller holdings to be taken over by the bigger ones. Indeed, between 2000 and 2010, all the classes of farms decreased in number in Finland. The only exception to this tendency was represented by the two largest categories of agricultural holdings, those with 50 to 99.9 hectares of UAA (+17 %) and the ones with 100 hectares or more of agricultural area, which more than doubled their population, from 1 700 units to 3 820.

Due to their growth both in numbers of units and size, agricultural holdings with more than 50 hectares of UAA substantially increased their importance over the period under analysis, accounting for 57 % of the whole agricultural area of Finland in 2010 (see Figure 1): they covered 38.3 % of UAA of the country in 2000. Similarly, whereas they represented only 13.5 % of the whole population of holdings in 2000, they accounted for 23 % of farms in 2010.

In 2010, the economic size of all the Finnish agricultural holdings was EUR 3 098 million (see Table 2). Although this value – calculated by adding all the standard output (SO) per hectare of crop and per head of livestock of the farms – represented a 13.5 % increase compared to 2007, it was found to be lower than the figure recorded for Sweden and Norway.

In terms of the main area of production, holdings specialised in cereals, oilseed and protein crops were found to be the most common in Finland in 2010 (see Figure 2), as they represented about 34 % of the total number of holdings. Accounting for 24 % of the total number of farms, the second most common type of production was general field cropping. Farms specialised in dairying accounted for further 16 %, whereas those dedicated to sheep, goats and other grazing livestock recorded a share below the double digits threshold (6 %).

When using the standard output (SO) for measuring the main types of farming, the hierarchy of the holdings changes (see Figure 3). If the economic size is taken into account, the holdings specialised in dairying were by far the most important, accounting for 37 % of the whole Finnish SO. The second highest contributions came from farms dedicated to the production of cereals, oilseed and protein crops (10 %), while all the other categories fell below the double digits threshold, with the farms specialised in pigs scoring the 9 %.

The utilised agricultural area (UAA) is the total area taken up by arable land, permanent grassland and meadow, permanent crops and kitchen gardens used by the holding, regardless of the type of tenure or of whether it is used as a part of common land.

While permanent grassland and meadow (1.4 %) and permanent crops (0.2 %) covered a minor portion of the agricultural area in 2010, kitchen gardens were non-significant, thus were not surveyed.

In Finland, the land worked (ploughed or tilled) regularly, generally under a system of crop rotation, remained stable accounting for roughly 98 % of the total UAA within the 2000-2010 decade: in absolute terms it actually grew by about 65 000 hectares.

Statistics on livestock use two different units of measurement: the number of heads (number of animals) and the livestock units (LSU), the latter allowing comparison.

Over the 2000-2010 period, the number of agricultural holdings with livestock decreased drastically (-42.1 %), from 39 940 to 23 130. Accordingly, their relative weight over the total number of farms decreased, from 49 % in 2000 to 36 % in 2010. Far from being equally distributed among all the categories of farms, the fall in the number of holdings with LSU characterised small-sized and medium-sized farms, while holdings with 50 or more LSU recorded an opposite tendency.

According to the Agricultural census 2010, in Finland the vast majority of UAA belonged to the farmers who actually worked on that land (see Table 6): 1.5 million hectares, corresponding to 65 % of the Finnish UAA.


As in Finland shared-farming is non-existent, the remaining 35 % of agricultural land was found to be farmed by the tenants.

According to the FSS 2010, there were 15 640 holdings, raising 925 790 heads of cattle in Finland. As exhibited in Table 7, the majority of farms (51.9 %) proved to host cattle in stanchion tied stable with solid dung and liquid manure (244 200 places). In terms on number of holdings, the second most frequent category was stanchion tied stable with slurry, accounting for 27.8 % of farms with cattle and a total of 207 950 places. Figures recorded for loose housing with solid dung and liquid manure were found to be very similar: 26.7 % of holdings with cattle and 223 970 places.

In Finland the total number of places for cattle (993 650) was found to be higher than the registered heads of cattle (925 790). Therefore, in 2010 the hosting capacity of the Scandinavian country was not entirely met by its cattle population.

In 2010, 16 920 agricultural holdings recorded activities other than farm work, directly related to the holding and having an economic impact on the holding in Finland (see Table 9). In relative terms, this value corresponded to the 26 % of the total population of Finnish farms, one of the highest percentages within the EU-27.

Information on other gainful activities was collected by eleven category types depending on their characteristics – each farm could be involved in more than one other gainful activity. In Finland, as well as in most of the EU Member States, the most common type of activity was found to be contractual work (9 320 farms), which could be classified as both contractual non-agricultural work (6 180 holdings) and contractual agricultural work (5 670 farms).

A very similar tendency characterised the number of holdings practicing organic farming, they fell from 4 280 in 2003 to 3400 in 2010. Accordingly, in 2010 those holdings represented 5 % of the whole population of farms.

In Finland, the Agricultural census 2010 and the Survey on agricultural production methods were conducted by the Information Centre of the Ministry of Agriculture and Forestry (Tike), which has been responsible for the implementation of the FSS since Finland joined the EU.

In Finland, information related to the SAPM was collected as a sample survey. At first, a sample frame was constructed according to the geographical location, the production sector and the economic size of the holdings; then a stratified sample was drawn.

In Finland, common land is a non-significant variable. Therefore, this characteristic was not surveyed.

The location of the agricultural holdings was mainly obtained from the Rural Business Administration Information System. Alternatively, it was drawn from the information service maintained by the National Land Survey of Finland.

Since the FSS 2007, the standard output (SO), a new classification of the economic size of the holding, has been implemented. The SO has replaced the Standard gross margin (SGM) used before. Nonetheless, for comparability reasons, both classifications are available in the FSS 2007.

Recently, a new NUTS 2 classification has been implemented in Finland as same regions have been merged and new ones have come out as result of a new split. Consequently, it was not possible to compare regional data from the FSS 2000 with the ones from the FSS 2010.