This article is part of a series of country-specific essays on the results of the European Union (EU) Farm structure survey (FSS) 2010. The FSS collects information on the structural characteristics of the agricultural holdings (land use, livestock and labour force) and is carried out by all European Union Member States every 10 years as an Agricultural census, with two or three additional, intermediate sample surveys carried out in-between. In Estonia, the FSS 2010 was the first Agricultural census to be carried out according to European legislation. The present analysis of the farm structure includes a comparison with the 2003 FSS, the first sample survey conducted in the country according to EU regulations. 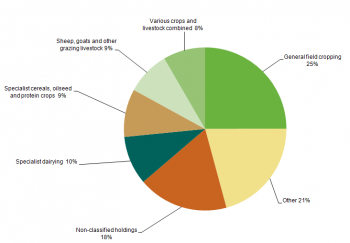 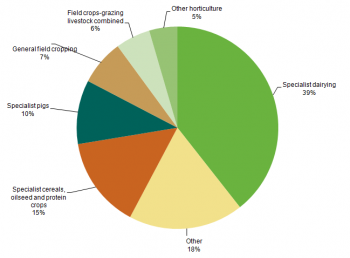 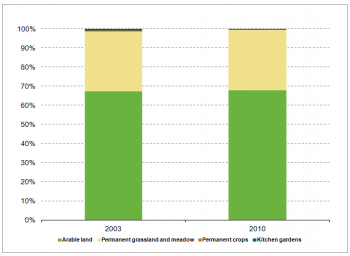 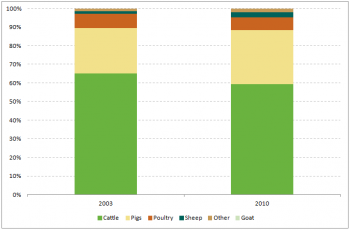 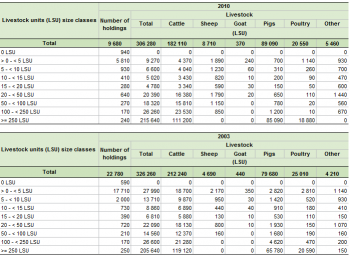 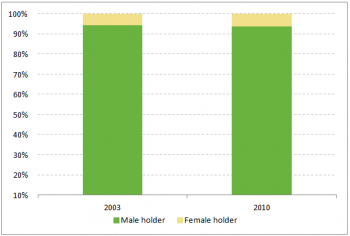 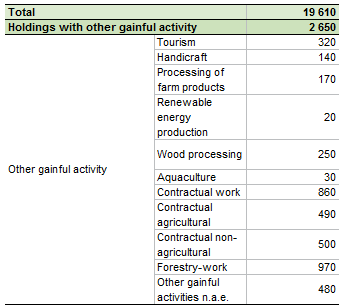 Among the Baltic countries, Estonia proved to be the one recording the smallest values of UAA: in 2010 it was one of the few Member States below the 1 million of hectares threshold. Also in terms of the number of holdings, Estonia recorded the lowest value among the Baltic countries and one of the lowest within the EU-27. On the contrary, the average size of the Estonian farms was found to be among the highest of the European Union.

When looking at the animal livestock expressed in livestock units (LSU), it can be observed that in 2010 there were 306 280 LSU recorded in Estonia (see Table 1): this is one of the smallest values among the EU Member States and it represents a decrease of 6.1 % when compared to 2003 data.

Agricultural holdings were found to be rather small in Estonia. According to the FSS 2010 data, 72 % of them had less than 20 hectares of UAA and accounted for 10 % of the UAA of the whole country. On the contrary, a large share (73 %) of the total UAA belonged to a small percentage of agricultural holdings (9 %): the farms with a size of 100 hectares or more.

In Estonia, the holdings with an economic size of EUR 500 000 or more represented 52 % of the total standard output of the agricultural holdings in 2010.

The utilised agricultural area (UAA) is the total area taken up by arable land, permanent grassland and meadow, permanent crops and kitchen gardens used by the holdings, regardless of the type of tenure or of whether it is used as a part of common land.

In Estonia, the land that is regularly worked (ploughed or tilled), generally under a system of crop rotation, represented 68 % of the total UAA in 2010 (see Table 3): it accounted for 67.3 % of the UAA in 2003. Despite its stability, same changes occurred in the structure of the arable land as the production of industrial crops doubled its weight over the total UAA, accounting for 10.6 % in 2010. Also, the follow land increased its weight over the total UAA reaching 4.5 % in 2010: it accounted for the 3.3 % of the Maltase UAA in 2003. On the other hand, while growing in absolute terms, cereals and fodder crops showed small decrease in terms of their share over the total UAA.

When comparing the FSS 2010 data with the FSS 2003 data, a decrease in the AWU directly employed in the agricultural sector is observed (-33 %).

In Estonia, according to the 2010 data, the majority of the UAA (52.7 %) was worked by the tenants: 495 620 hectares. On the contrary, 377 980 hectares of UAA (40.2 %) belonged to the farmers who actually worked on that land. The remaining 7.2 % was recorded as being under shared farming or other modes – this is an agricultural area utilised in partnership by the landlord and the sharecropper, under a written or oral share-farming contract, or it is an area utilised under other modes of tenure.

Due to its meteorological condition, as in most of the northern European countries, irrigation is of no relevance in Estonia. In 2010, there were 460 hectares of irrigable area in Estonia, representing the 0.05 % of the total UAA. Furthermore, 330 hectares were found to be irrigated at least once a year; this figure does not account for the area of kitchen gardens (1 710 ha) and represents the 0.04 % of the UAA of the Baltic country.

According to the data of the Agricultural census 2010, there were 2 650 holdings with other gainful activities in Estonia (see Table 8). Representing a small share of the whole population of agricultural holdings (13.5 %), these farms recorded activities other than farm work, directly related to the holding and having an economic impact on the holding.

As reported in the National Methodological Report, Statistics Estonia was the official body responsible for undertaking the Census of agriculture in 2010. The department concerned was the Agricultural Statistics Department. The Agricultural Census 2010 was the sixth one done in Estonia: the previous ones were conducted in 1919, 1925, 1929, 1939 and 2001. While in the Agricultural census 2001 the national threshold was used, the new threshold was applied after that and the 2001 data were recalculated accordingly.

Whereas no samples were used for collecting data for the Census of Agriculture 2010 and the Survey on Agricultural Production Methods (SAPM), a threshold was applied in both surveys. Accordingly, the agricultural holding was defined as a unit where there is at least one hectare of utilised agricultural area or where agricultural products are produced mainly for sale.

In case of holdings with less than one hectare of utilised agricultural area, the physical threshold was used in order to determine potential holdings producing mainly for sale. The physical threshold was used if there was no information about products produced for sale. The threshold was as follows: at least 3 cattle; 10 pigs, sheep or goats; 10 swarms of bees or 100 heads of poultry; 0.5 ha of fruit and berry plantations; 0.3 ha of fresh vegetables; 0.2 ha of nursery; 0.01 ha of outdoor flowers, crops under glass or arable land seeds.

Common land – which is the land that does not directly belong to any agricultural holding but on which common rights apply – is non-existent in Estonia. Indeed, even if some holdings graze their animals in the same area, they can say which part of this area belongs to them.

The geo-coordinates of the holdings were taken from the cadastre system. Afterwards, for confidentiality reasons they were rounded into a 5 by 5 km grid.

From FSS 2007 onward, the Standard output, a new classification of the economic size of the holding, has been implemented. The SO has replaced the standard gross margin (SGM) used before. Nonetheless, for comparability reasons, in FSS 2007 both classifications are available.

As indicated in the National Methodological Report, the question about the volume of water used for irrigation was included in the questionnaire. Then, if the holders could not estimate this volume, they were asked for a general description of how often and how much irrigation was used. Also imputation on the basis of the data received was used.

The amount of water does not include water used in greenhouses and kitchen gardens: these areas constituted 0.004% and 0.181% – respectively – of utilized agricultural area.