This article is part of a series of country-specific essays on the results of the European Union (EU) Farm structure survey (FSS) 2010. The FSS collects information on the structural characteristics of agricultural holdings (land use, livestock and labour force) and is carried out by all European Union Member States every 10 years as an Agricultural census, with two or three additional, intermediate sample surveys carried out in-between.

The present analysis of Danish farm structure includes a comparison with the Agricultural census 2000. However, Denmark experienced an extensive regional reform over the inter-census period, which led to the creation of new administrative regions. As a consequence, the NUTS 3 regions used for the FSS 2000 do not generally correspond to the new NUTS level 2 regions applicable in 2010. Therefore, it is not possible to compare regional data for the two reference years (2000 and 2010) and comparisons have only been made at national level. 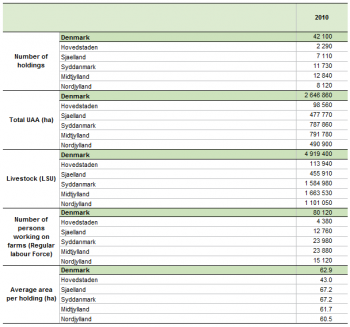 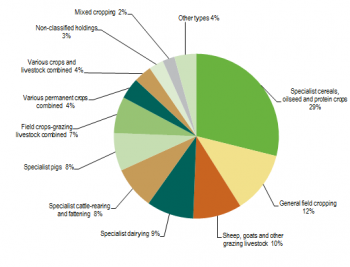 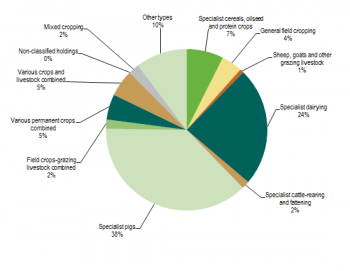 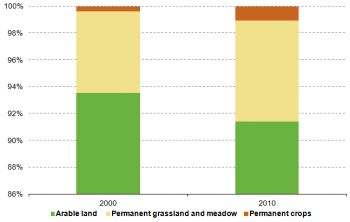 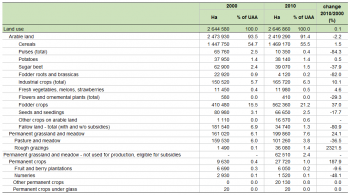 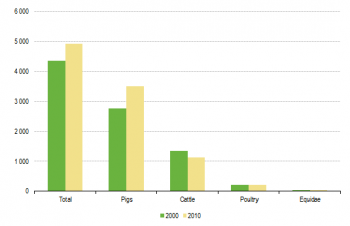 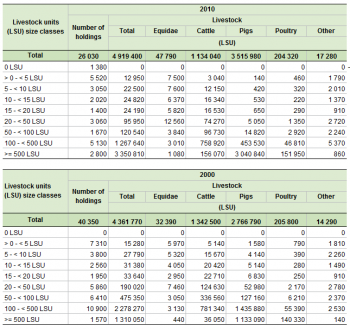 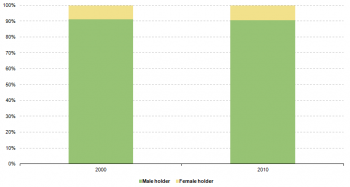 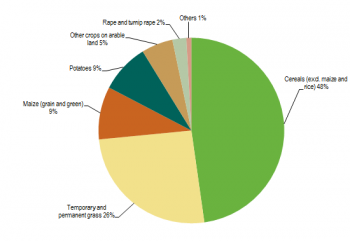 In Denmark, there were 42 100 agricultural holdings in 2010 (see Table 1). Compared to the other Scandinavian countries, both Norway (46 620) and Sweden (71 090) recorded higher numbers. About 16 000 farms ceased their activities in Denmark (-27%) over the inter-census period. However, this declining trend in the number of farms was common among the countries of the EU-27.

The utilised agricultural area (UAA) in Denmark remained fairly stable between the two reference years; there were 2.6 million hectares in 2010, covering 61% of the entire country in 2010. This was one of the highest proportions recorded in the EU-27.

As the number of farms decreased and agricultural land remained stable, the average size of the holdings grew (+37%): from 46 hectares per farm in 2000 to 63 hectares in 2010. As a result, Denmark was among the EU Member States with the highest average area per farm.

Similar to the other Scandinavian countries, in Denmark the number of people regularly working on farms decreased over the period under analysis (-22%). In absolute terms 22 550 people left the agricultural sector over the inter-census period. As a result, the agricultural labour force represented only 2.8% of the active population[1] in 2010; the corresponding values in Sweden (2.9%) and Norway (4.8%) were slightly higher.

Among the Danish territories, the largest economic value was found in Syddanmark (EUR 2 836 million), 33% of the Danish SO. The second highest figure was in the region of Midtjylland (EUR 2 660 million), corresponding to 31% of the country’s standard output in 2010.

In terms of the main types of farming, farms specialised in cereals, oilseed and protein crops were the most common, representing 29% of the entire population of holdings in 2010 (see Figure 2). Farms specialised in general field cropping made up the second highest proportion (12%), followed by holdings dedicated to sheep, goats and other grazing livestock (10%).

If the economic size is taken into account, the ranking looks different and there were two main types of farms, together accounting for 62% of the Danish standard output: specialist pig farms (38%) and dairy farms (24%).

The Utilised Agricultural Area (UAA) is the total area used by a farm, regardless of the type of tenure or whether it is used as a part of common land. It includes four major components: arable land, permanent grassland and meadow, permanent crops and kitchen gardens.

Statistics on livestock use two different units of measurement, the number of head (number of animals) and the livestock unit (LSU), with the latter allowing comparison between different types.

As presented in Table 5, 26 030 holdings were farming about 4.9 million LSU in Denmark in 2010. Although the number of farms with livestock decreased sharply (-35%) over the period under analysis, the population of farm animals grew (+13%). As a result, the average number of livestock per farm increased from 108 LSU per farm in 2000 to 189 LSU per holding in 2010. Far from being evenly spread across all the livestock size categories of farms, this growth was seen only in the biggest type of holdings – those with 500 or more LSU – which saw increases in both the number of holdings (+78%) and the livestock population (+2 million LSU). Compared to 2000, all other size classes of livestock farms saw reductions in both the number of farms and the population of farm animals.

In Denmark, pigs were the most common livestock with 3.5 million LSU (+27%), accounting for 71% of the Danish population of farm animals in 2010. Cattle were the only other livestock with an LSU of more than one million (1.1 million LSU); they represented 23% of the whole country’s LSU in 2010 despite the fact that they decreased by 15% compared to 2000.

As presented in Table 6, about 80 000 people were regularly working in the agricultural sector in Denmark in 2010, a decrease of 22% from 2000. This declining trend was observed throughout the EU-27. The proportional decrease in the agricultural labour force in Denmark is quite similar (-21%) if the annual work unit (AWU) is used: there were 52 300 AWUs in 2010.

In 2010, most of the regular agricultural labour force was located in the regions of Syddanmark (30%) and Midtjylland (30%). This is expected since these two regions contained the largest numbers of farms.

In 2010, the majority (69%) of Danish agricultural land was farmed by tenants and the remaining 31% by the farm owners (see Table 7). This split was fairly consistent across the regions. There was no land utilised in partnership by the landlord and the sharecropper under a written or oral share-farming contract in Denmark.

In Denmark, the total irrigable area increased by 7.5% over the decade under analysis from 446 920 to 480 440 hectares. In 2010, 323 500 hectares had been irrigated at least once a year, covering 12% of the country’s agricultural area. However it must be noted that the extent of the irrigated area varies over the years according to the weather conditions.

In Denmark, about 220 million cubic metres of water were used to irrigate the 323 500 hectares of agricultural crops and grassland. This equates to an average of 680 cubic metres of water per hectare. Information on the amount of irrigation water used was obtained through a specific question in the survey. A total of 3 863 farms that irrigated crops were sampled in the SAPM, of which 833 did not answer the question. In these cases data were imputed so that a national estimate could be made.

The most common types of cattle housing in Denmark were those where the animals are allowed to move freely (loose housing). Going by farm numbers, loose housing where the manure is removed from the building mechanically as solid dung was the most popular with 9 400 holdings having this type of housing. However, going by the animal capacity, loose housing where the animal waste drops below the floor into a pit to form slurry had the largest capacity with 887 010 places. Similar to many other EU member States, the total capacity of cattle housing in Denmark was higher than the number of heads of cattle, which explains why the related ratio is higher than 100% (see Table 9).

As presented in Table 10, there were 21 900 farms with other gainful activities in 2010 in Denmark. Representing more than half (52%) of the Danish population of agricultural holdings, these farms undertook activities other than farm work, directly related to the holding and having an economic impact on it. Compared to the other Scandinavian countries, both Norway (25 500) and Sweden (24 050) recorded higher numbers.

Information on other gainful activities was collected for eleven different categories; a holding could record more than one activity. Forestry work (12 950 farms) was by far the most common type of extra activity, followed by contractual work (6 400 farms), which could take the form of contractual agricultural work (5 420 holdings) and contractual non-agricultural work (2 420 farms).

Among the Danish regions, the largest numbers of farms with other gainful activities were in Midtjylland (6 950 farms) and Syddanmark (6 180 farms), accounting for 32% and 28% respectively of the population of holdings with extra sources of income.

Although the number of holdings practising organic farming decreased by 17% between 2000 and 2010 to 2 100 farms, the agricultural area increased slightly (0.7%) to 150 940 hectares. Nonetheless, the organic area covered only 5.7% of Danish agricultural area. Compared to the other Scandinavian countries, Sweden (310 060 ha) reported a higher area under organic farming, while Norway recorded a lower value (43 740 ha).

The FSS 2010 was conducted by the division responsible for agricultural statistics of Statistics Denmark. The Agricultural census in its present form goes back to 1977 when the surveys on agriculture and horticulture were integrated. Since then the survey has been carried out every year, though not always in an extensive form.

In Denmark, the SAPM was conducted as a sample survey; a stratified sampling method was used to select 15 005 holdings from the population of 42 100.

Contrary to the FSS, the SAPM took place in 2011 and the reference period is July 2011. Information on tillage methods and manure application concerns the crop year (October 2009 – September 2010) prior to the reference date.

In compliance with the EU regulation 1166/2008, Statistics Denmark surveyed all agricultural holdings with at least 5 hectares of agricultural area or a standard output of at least EUR 7 500. Moreover, all farms falling below this threshold but complying with a set of different physical thresholds (related to the area of certain types of crops or heads of livestock) were also included in the target population.

In Denmark, the thresholds for excluding the smallest units from the survey have been revised over the years. In particular, the new thresholds introduced with the EU regulation 1166/2008 led to the inclusion of 431 more farms in the Danish farm structure census 2010. Denmark also chose to include farms with furred animals from 2010 onwards, which resulted in a further 736 farms being added to the 2010 population. Overall, these 1 167 extra farms, which would not have been included otherwise, account for 2.8% of the farms in Denmark, 0.03% of the Danish agricultural area and 0.07% of the country’s livestock units.

In Denmark, common land does not exist, as all the agricultural area belongs to somebody. For this reason, common land has never been covered by the Farm Structure Survey in this country.

In Denmark, information on the location of the farms is stored in the Danish business register and refers to the address of the head quarter of the holding.

In Denmark, following an extensive regional reform, new administrative regions were created and new NUTS level 2 regions were defined in 2006. The previous NUTS 3 regions used for the FSS 2000 do not generally correspond to the new NUTS level 2 regions applicable in 2010. Therefore, it is not possible to compare regional data for years 2000 and 2010.