This article is part of a series of country-specific essays on the results of the European Union (EU) Farm structure survey (FSS) 2010. The FSS collects information on the structural characteristics of agricultural holdings (land use, livestock and labour force) and is carried out by all European Union Member States every 10 years as an Agricultural census, with two or three additional, intermediate sample surveys carried out in-between.

The present analysis of farm structure includes a comparison with the Agricultural census 2003, the first one conducted in Bulgaria in compliance with the EU regulations. In contrast with the FSS 2010, the Agricultural census 2003 in Bulgaria did not include information on common land. As a result 2010 data presented throughout this article do not include information on common land when comparisons to 2003 are made. On the contrary, data on common land are taken into account when the analysis concerns just 2010 data. 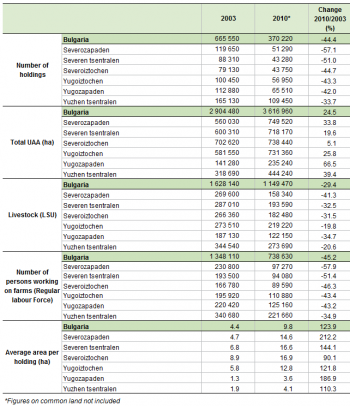 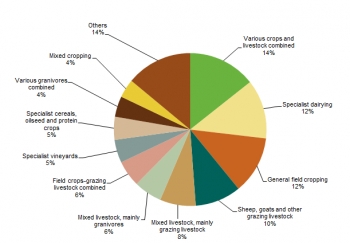 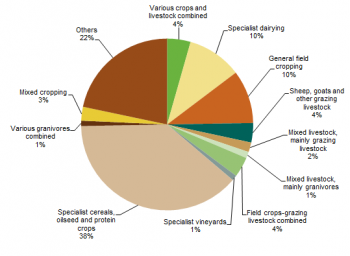 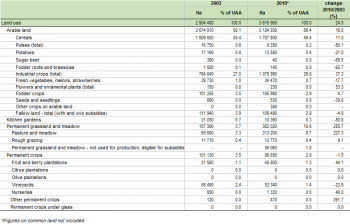 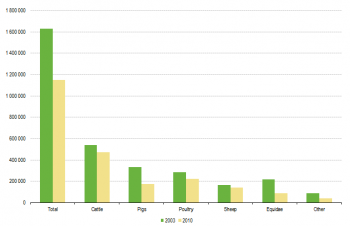 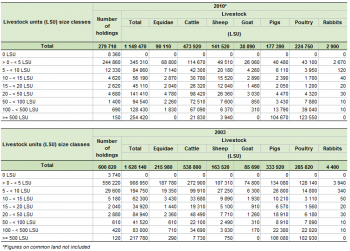 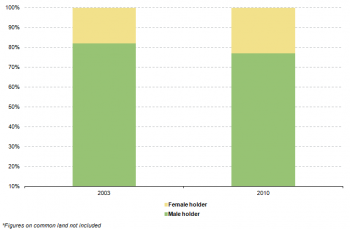 Despite the sharp decline in the number of farms, the Bulgarian utilised agricultural area (UAA) increased by a quarter(+712 480 ha). In 2010 there were 3.6 million hectares of UAA, covering 33% of the entire territory of the country.

In Bulgaria, the combined effect of the decrease in the number of holdings and the increase in agricultural land resulted in a growth of the average size of holdings, which more than doubled from 4.4 hectares per farm in 2003 to 9.8 hectares in 2010.

The number of people regularly working on Bulgarian farms dropped by 45% from 1.3 to 0.7 million between 2003 and 2010. Nonetheless, in 2010 the agricultural labour force still represented 22% of the active population [2], one of the highest proportions recorded among the EU Member States.

As the territorial analysis presented in Table 2 shows, the largest number of farms (109 450) in Bulgaria was within the region of Yuzhen tsentralen, accounting for 30% of the country's total agricultural holdings in 2010. Despite a decrease of 42% compared with 2003, the second largest number of holdings was found in the Yugozapaden region (65 510), accounting for 18% of Bulgarian farms. In terms of the agricultural area, Severozapaden recorded the largest proportion (21%) of the Bulgarian UAA with 749 520 hectares in 2010, an increase of 34% compared with 2003. Severoiztochen (738 440 ha) and Yugoiztochen (731 360 ha) also had similar areas and accounted for 20% each.

In terms of agricultural labour force, about a third (30%) of the total number of regular employees were working on farms in Yuzhen tsentralen in 2010; in 2003, the corresponding proportion was 25%. The region with the second largest agricultural workforce in 2010 was Yugozapaden with 125 160 regular farm employees, accounting for 17% of the total.

The polarisation of the structure of Bulgarian agriculture is partially due to the process which took place during the 1990s, when state-owned land was returned to the previous owners or their inheritors. The resulting ownership changes led to a shift in the agricultural structure, as the division of land into small pieces brought about a high degree of fragmentation on the one hand, and the establishment of large commercial companies on the other hand (Banski, J.) [3].

The total standard output (SO) of Bulgarian agricultural holdings was EUR 2 458 million in 2010. Among the other EU-27 countries, Finland (EUR 3 098 million) and Slovakia (EUR 1 731 million) recorded the closest values. The standard output is calculated by adding all the standard output values per hectare of crop and per head of livestock of the farms, and in Bulgaria it increased by 6.2% compared with 2007. However, this growth was not seen in all economic size classes of farms, as holdings with less than EUR 8 000 of SO saw decreases (see Table 3). Almost half of the standard output of Bulgarian farms (42%) came from large holdings, those with an economic size of EUR 250 000 or more. They had an SO value of about EUR 1 033 million SO in 2010.

Four out of the six NUTS 2 regions of Bulgaria recorded very similar values in terms of the standard output; the region of Yuzhen tsentralen had the highest share (20%), followed by Yugoiztochen (19%), Severen tsentralen and Severoiztochen (both with 18%). In contrast, the Yugozapaden region recorded the lowest share (7.7%).

In terms of the number of holdings by main type of farming, the structure of Bulgarian agriculture appears quite diversified as no dominent type of production could be identified. However, in 2010 the most common types of farm were those with both crops and livestock combined (14%), specialist dairy farms (12%), general field cropping farms (12%) and those dedicated to sheep, goats and other grazing livestock (9.7%) (see Figure 2).

If the standard output is taken into account, the breakdown of farm types looks different, as farms specialised in cereals, oilseed and protein crops played a major role; in 2010, they accounted for 38% of the agricultural standard output of Bulgaria. Farms dedicated to dairying (10%) as well as those specialised in general field cropping (10%) were the only other types recording a double digit proportion.

The Utilised Agricultural Area (UAA) is the total area used by a farm, regardless of the type of tenure or whether it is used as a part of common land. Generally, it includes four major components: arable land, permanent grassland and meadow, permanent crops and kitchen gardens.

Statistics on livestock use two different units of measurement, the number of head (number of animals) and the livestock unit (LSU). The latter allows comparison between different types.

Accounting for 41% of Bulgarian livestock, cattle were the most important farm animals, although their number decreased by 12% over the period under analysis. Poultry was the second most common livestock, accounting for 20% of the country’s farm animal population in 2010 compared with 18% in 2003. Pigs (15%) and sheep (12%) also made up substantial proportions of Bulgaria's livestock.

Despite the fact that their number halved over the period under analysis, holdings with livestock accounted for 76% of the total population of farms in 2010. This was one of the highest proportions recorded among the EU Member States in 2010, although it was much lower than the corresponding figure in 2003 (90%).

The regional analysis of livestock highlighted the importance of Yuzhen tsentralen, which had 32% of the total population of cattle (151 610 LSU) in 2010. The Severen tsentralen region had the largest numbers of poultry with 23% of Bulgaria’s population of poultry (52 710 LSU).

As shown in Table 6, 738 630 people were regularly working on farms in Bulgaria in 2010. This indicates that, like many other EU Member States, Bulgaria experienced a decrease (-45%) in the agricultural labour force: there were over 1.3 million regular employees of the Bulgarian agricultural sector in 2003. In terms of the annual work unit (AWU), the decline in the agricultural labour force appears even sharper: from 766 440 AWU in 2003 to 389 110 AWU in 2010 (-49%).

According to the Agricultural census 2010, 65% of the Bulgarian agricultural area (2.9 million ha) was farmed by tenants. Percentages higher than the national average were recorded in Severoiztochen (76%) and Severen tsentralen (74%).

In Bulgaria there was no land being farmed in partnership by the landlord and the sharecropper under a written or oral share-farming contract. Hence the remaining 35% of UAA was farmed by the owners. The region of Yugozapaden stood out, with its proportion of land farmed by owners much higher than the national average (69%, see Table 7).

In terms of both the animal capacity (425 130) and number of farms (57 460), the most common type of cattle housing in Bulgaria was that where animals are stanchion tied and the manure is typically removed mechanically from the building as solid dung.

The total capacity of cattle housing (places) in Bulgaria exceeded the number of cattle, which explains why the related percentage shown in Table 8 is more than 100.

As presented in Table 9, there were 4 180 farms with extra sources of income in 2010 in Bulgaria. These are farms that undertook activities other than farm work directly related to the holding and having an economic impact on the holding, and accounted for 1.1% of the entire population of farms. Among the other EU Member States, Latvia (4 170) and the Czech Republic (3 440) recorded similar numbers.

The Agricultural census in 2010 was the first to be conducted after Bulgaria’s accession to the European Union (2007) and the second carried out in compliance with EU legislation. The responsible body was the Ministry of Agriculture and Food (MAF), which conducted the FSS 2010 together with the regional governors and the mayors of the municipalities.

In 2010 a unique survey was carried out together with the Agricultural census, the Survey on agricultural productions methods (SAPM). This survey collected data at regional level needed to establish agri-environmental indicators as indicated in COM final 508/2006 final and to evaluate the greening of the Common Agricultural Policy.

In Bulgaria, the SAPM was conducted as an exhaustive survey together with the Agricultural census 2010.

Information on the structure of Bulgarian agriculture was collected as of 31 August 2010. In addition, data on the labour force and grazing animals were collected with reference to the 12 months prior to this date, while information on the agricultural area refers to the 1 October 2009 – 30 September 2010 period. Figures on rural development and the average irrigated area refer to a longer timeframe, i.e. the years 2008, 2009 and 2010.

In Bulgaria, agricultural holdings with at least 0.5 hectares of UAA were taken into account. Given the characteristics of Bulgarian agriculture, farms falling below this threshold but complying with a set of different physical thresholds related to the hectares of certain types of crops or head of cattle were also included in the target population.

In Bulgaria, information on the area of common land was included for the first time in the FSS 2010. The resulting figure was 858 563 hectares – about 19% of the Bulgarian agricultural area – and this was used collectively by 191 000 holdings, mainly for animal grazing.

Information on the location of the agricultural holdings in Bulgaria was obtained through the coordinates of the related administrative-territorial units.

From FSS 2007 onward, the Standard output (SO), a new classification of the economic size of the holding, is used. The SO has replaced the Standard gross margin (SGM) used before. Nonetheless, for comparability reasons, in FSS 2007 both classifications are available.

European Commission Rural development policy aims to improve competitiveness in agriculture and forestry, the environment and the countryside as well as the quality of life in rural areas, and to encourage the diversification of rural economies.