This article is part of a series of country-specific essays on the results of the European Union (EU) Farm structure survey (FSS) 2010. The FSS collects information on the structural characteristics of agricultural holdings (land use, livestock and labour force) and is carried out by all European Union Member States every 10 years as an Agricultural census, with two or three additional, intermediate sample surveys carried out in-between. The present analysis of Belgian farm structure includes a comparison with the FSS 2000.

Belgian data from the FSS 2000 were published at NUTS 1 level (2 regions), while data from the FSS 2010 was available at NUTS 2 level (11 regions). Due to this inconsistency in the publication of regional data, this analysis of Belgian agriculture was conducted only at national level. However, hyperlinks to the regional data are also provided throughout the article. 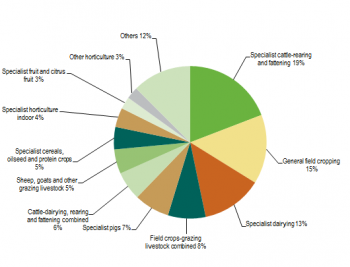 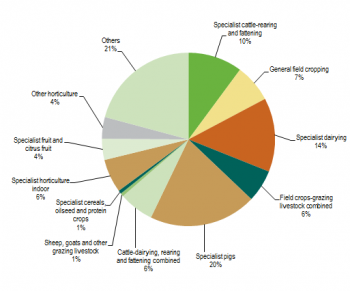 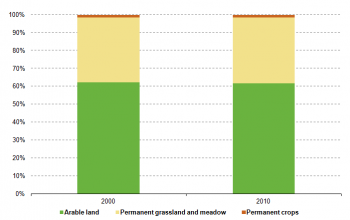 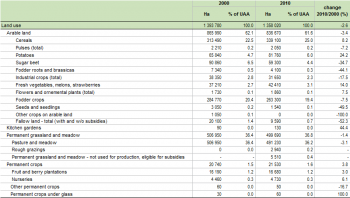 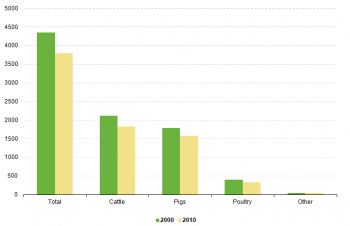 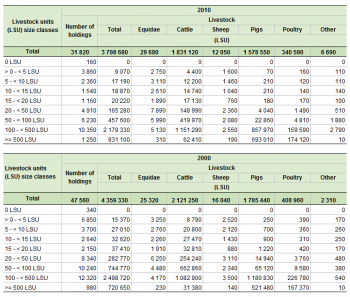 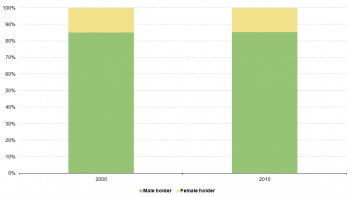 The utilised agricultural area (UAA) in Belgium also decreased, although at a lower rate (-2.6%). In 2010 the UAA was 1.4 million hectares, covering 44% of the country’s territory.

As shown in Table 1, 3.8 million livestock units (LSU) were reported in Belgium in 2010; Denmark (4.9 million LSU) and Austria (2.5 million LSU) recorded the closest values among the other EU-28 countries. Between the two reference years, the Belgian population of farm animals decreased by 13%, from the 4.4 million LSU recorded in 2000.

As seen across the EU-28, the number of people regularly working on farms in Belgium decreased, to 80 940 (-24%). In absolute terms, about 26 200 people left the agricultural sector over the decade. The agricultural labour force represented only 1.6% of the Belgian active population[1] in 2010, one of the lowest proportions among the EU Member States.

The Belgian population of farms was roughly evenly distributed across all the UAA size classes (see Figure 1) in 2010. The largest proportion of holdings (17%) were in the 30 to 49 hectares size band, followed by 16% of holdings with between 50 to 99 hectares of UAA and 16% with 10 to 19 hectares of agricultural land. However, holdings with 50 to 99 ha of UAA covered 34% of the Belgian agricultural area, the highest percentage of land covered by a single class of farms in 2010, while farms with 10 to 19 ha of UAA covered just 7%.

In terms of the main type of farming, farms specialising in cattle-rearing and fattening were the most dominant, accounting for 19% of the total number of holdings in 2010 (see Figure 2). Farms dedicated to general field cropping accounted for a further 15%, followed by dairy holdings (13%).

If the standard output of holdings is taken into account, the ranking looks different as pig farms accounted for the largest proportion (20%) of the country’s total SO in 2010. Holdings specialising in dairying made up the second highest proportion of SO (14%), followed by farms dedicated to cattle-rearing and fattening (10%).

The Utilised Agricultural Area (UAA) is the total area used by a holding, regardless of the type of tenure or whether it is used as a part of common land. Generally, it is made of up arable land, permanent grassland and meadow, permanent crops and kitchen gardens.

The Belgian agricultural area consists essentially of arable land and permanent grassland and meadow, as these two components together accounted for about 98% of the country’s UAA in both reference years. However, both components reduced in area between 2000 and 2010, with arable land losing roughly 29 000 hectares (-3.4%) and permanent grassland and meadow 7 260 hectares (-1.4%).

In Belgium, arable land mostly consists of cereals and fodder crops. As shown in Table 3, cereals covered about a quarter of the Belgian agricultural area in 2010 and increased by 8.2% to 339 thousand hectares in 2010. In contrast, land dedicated to fodder crops fell by 7.5% to 263 thousand hectares, though it still accounted for 19% of the country’s UAA in 2010.

Statistics on livestock use two different units of measurement: the number of head (number of animals) and livestock units (LSU), with the latter allowing comparison between different types.

In relative terms, there were 0.35 LSU per inhabitant in Belgium in 2010. Over the timeframe under analysis, the Belgian population grew (+5.9%) while the number of livestock dropped (-13%). Hence, the number of farm animals per inhabitant was higher in 2000 (0.43 LSU).

In 2010, Belgian farms had mainly cattle and pigs, which together accounted for 90% of the country’s livestock population. As shown in Table 4, cattle were the most common type of livestock with 1.8 million LSU, 48% of the total population of farm animals. Pigs accounted for a slightly smaller proportion (42%) with 1.6 million LSU (-12% compared to 2000). Although they decreased by 17% (-68 370 LSU) between the two reference years, poultry were the third most common livestock (340 590 LSU) and accounted for 9.0% of the entire LSU population in 2010.

As shown in Figure 6, the proportions of male and female holders remained unchanged between 2000 and 2010.

In contrast with the trend observed across the EU-28, a major proportion of Belgian agricultural land (66%) was farmed by tenants in 2010 (see Table 6). A further 33% was farmed by farm owners, while only 1.1% of the country’s UAA (15 420 ha) was farmed in partnership by the landlord and the sharecropper under a written or oral share-farming contract.

In 2010, 24 950 holdings farmed about 2.6 million cattle in Belgium. Among the other European Member States, Sweden (21 590) reported a comparable number of farms with cattle.

As shown in Table 7, the type of housing where the cows are free to move and the manure is typically removed mechanically was most common in 2010, both in terms of the number of holdings (67%) and the total animal capacity (about 1.3 million places). Going by the number of holdings, the second most common type of animal housing was that where cattle are tied to their places with the manure removed mechanically, at 59% of holdings with cattle. However in terms of the animal capacity, “loose housing with slurry” was the second most common type of animal housing (732 710 places).

According to the Agricultural census 2010, there were 3 360 holdings with other gainful activities in Belgium, 7.8% of farms. These farms recorded activities other than farm work, directly related to the holding and having an economic impact on the farm.

Information on other gainful activities was collected for eleven different categories and a holding could have more than one activity. As in many other EU Member States, the most common extra source of income in Belgium was contractual work, which was reported by 1 240 farms.

In Belgium, organic farming was an uncommon practice, undertaken by just 0.02% of farms and taking up only 2.1% of the country’s agricultural area.

In Belgium, the National Statistical Office is the responsible body for the Agricultural census, though the data collection is conducted by the local administrations.

In 2010 a unique survey was carried out as well as the Agricultural census, the Survey on agricultural productions methods (SAPM). This survey collected data at regional level needed to establish agri-environmental indicators as indicated in COM final 508/2006 and to evaluate the greening of the Common agricultural policy.

In Belgium, the SAPM was conducted as a sample survey in 2011; 2 407 agricultural holdings were selected through a stratified sampling technique, which represented 5.7% of the total number of Belgian farms in 2010.

The reference date for the FSS 2010 is 1 May 2010, however, data on animal housing, labour force and indoor crops refer to the twelve months prior to this date.

In Belgium, the Agricultural census was conducted as an exhaustive survey; it targeted all the farms regardless of their size, provided that they were farming agricultural products for sale at the reference date.

Information on the location of the farms was mainly obtained through their addresses, recorded in the farm register.