This article is part of a series of country-specific essays on the results of the European Union (EU) Farm structure survey (FSS) 2010. The FSS collects information on the structural characteristics of agricultural holdings (land use, livestock and labour force) and is carried out every 10 years as an Agricultural census by all the EU Member States, with two or three additional, intermediate sample surveys carried out in-between. The present analysis of Austrian farm structure includes a comparison with the previous (2000) Agricultural census. Although the reference years of the Agricultural census in Austria were 1999 and 2010 respectively, the common designation is Agricultural census 2000 and 2010. 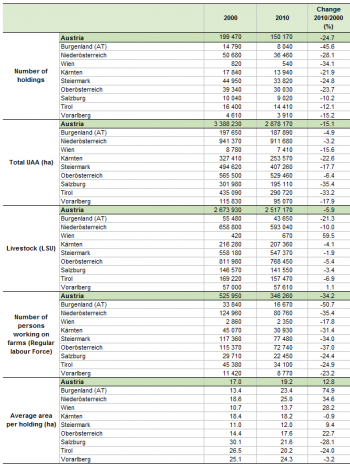 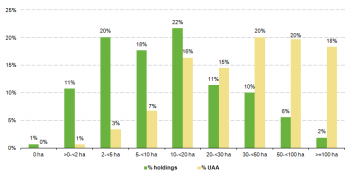 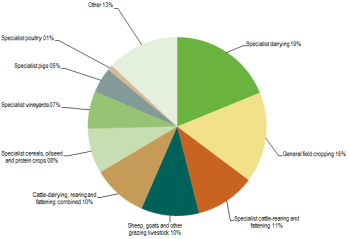 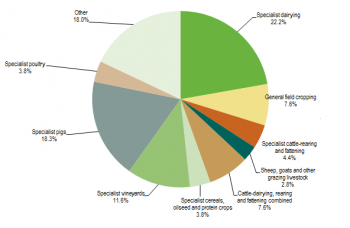 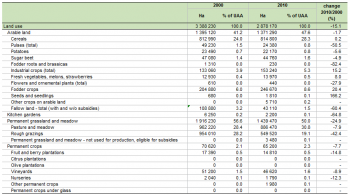 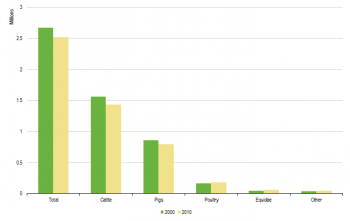 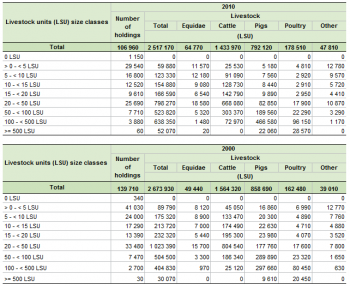 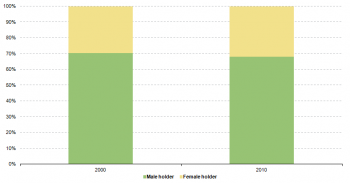 The utilised agricultural area (UAA) also decreased (-15.1 %) over the inter-census timeframe, and in 2010 it fell below the 3 million ha threshold. In absolute terms, about 3.4 million hectares of agricultural land were recorded in 2000 while only 2.9 million were left in 2010 (-510 060 hectares). As a result, in Austria the agricultural area covered about one third of the territory of the whole country in 2010; this is below the EU average and can be explained by the predominantly mountainous terrain.

Between 2000 and 2010, the number of persons regularly working in agriculture fell by one third. In absolute terms, about 180 000 persons left the agricultural sector over the inter-census time-frame, resulting in a remaining regular workforce of 346 260 persons in 2010. Hence, in 2010 the Austrian agricultural labour force represented 8.0 % of the active population[1].

In Austria, the livestock population – expressed in livestock units (LSU) – reached 2.5 million in 2010, a decrease of 6 % compared to the FSS 2000; in absolute terms, the Austrian population of farm animals dropped by about 157 000 LSU.

The regional analysis presented in Table 2 provides an insight into the local characteristics of Austrian agriculture and highlights the peculiarity of its structure, where three regions play a leading role. Indeed, for each of the key indicators analysed (number of holdings, total UAA, livestock population and number of persons working on the farms), the territories of Niederösterreich, Steiermark and Oberösterreich recorded the highest values and together accounted for over 60 % of the national total.

On the other hand, the capital region of Wien plays only a marginal role in the country’s agricultural economy, as for each of the key indicators its shares are below 1 %. The sharpest decline in agricultural activity was recorded in Burgenland; in this region, the number of holdings and the agricultural workforce declined by about 50 %.

As shown in Table 3, the economic size of all Austrian agricultural holdings reached a value of EUR 5 879 million in 2010. This value, which is calculated by summing up the standard outputs (SO) per hectare of crop and per head of livestock of the farms, represented a 13.1 % increase compared to 2007; within the EU, Greece (EUR 6 700 million) and Hungary (EUR 5 241 million) recorded similar values in 2010.

In terms of the main type of farming, holdings specialised in dairying were the most common in Austria: as shown in Figure 2, they represented 18.8 % of the total population of farms in 2010. The second highest share was recorded by farms specialised in general field cropping (16.4 %). Holdings dedicated to cattle-rearing and fattening (10.8 %), those specialised in sheep, goats and other grazing livestock (10.5 %) and farms dedicated to cattle-dairying, rearing and fattening combined (9.9 %) recorded very similar values.

The Utilised Agricultural Area (UAA) is the total area – taken up by arable land, permanent grassland and meadow, permanent crops and kitchen gardens – used by the holding, regardless of the type of tenure or whether it is used as a part of common land.

In Austria, the UAA is essentially made up of arable land and permanent grassland and meadow: together these two components accounted for 98 % of the country’s agricultural area in 2010. Compared to 2000, arable land increased its share in the total (from 41.2 % to 47.6 %), although in absolute terms it decreased by about 24 000 hectares. In contrast, the relative weight of permanent grassland and meadow decreased, from 56.6 % to 50 % (-500 000 hectares in absolute terms).

Despite decreasing by about 500 000 hectares during the inter-census decade, the land dedicated to permanent grassland and meadow represented half of the Austrian agricultural area in 2010. In particular, in absolute terms the area dedicated to pasture and meadow decreased marginally (-76 000 ha) while actually increasing its share in total UAA, from 28.4 % to 30.8 %. In contrast, the area dedicated to rough grazing dropped by 404 490 hectares to 549 520 hectares in 2010 (19.1 % of the country’s UAA).

This decrease in the area of rough grazing is partially the result of improved topographical surveying in the alpine regions, allowing better distinction of areas unfit for agricultural use from the actual rough grazing areas. The extent of this phenomenon is hard to quantify. This has to be kept in mind when analysing land use figures over time, as 2010 values may not be comparable to those from earlier years.

Statistics on livestock can be measured in livestock units (LSU) or number of head (number of animals), with the LSU allowing comparison between different types of livestock.

In Austria, the number of livestock (measured in LSU) decreased by 5.9 % over the inter-census period, to reach 2.5 million LSU in 2010; among the EU Member States, Hungary (2.5 million LSU) and Greece (2.4 Million LSU) recorded similar values.

In a similar fashion as in most other EU Member States, the decrease in the number of holdings in Austria was observed mainly for farms with few LSU, particularly for holdings with less than 50 LSU.

As mentioned above, the regions of Niederösterreich, Steiermark and Oberösterreich together accounted for 76 % of the Austrian population of farm animals in 2010.

In terms of sole holders, the gender gap showed signs of a decrease over the period under analysis: 69 % of sole holders in Austria were male in 2000, while in 2010 the share was 66 %, one of the lowest values among the surveyed countries.

In 2010, the vast majority of the Austrian agricultural area (64.5 %) belonged to the farmers who actually worked on that land (see Table 7). Another significant share of agricultural land (31 %) was farmed by tenants, while the portion of land utilised in partnership by the landlord and the sharecropper under a written or oral share-farming contract was marginal (4.6 %). In Austria, this category applies mainly to areas that are entrusted to the farmer for agricultural use free of charge (without paying rent).

According to the FSS 2010, there were 71 940 holdings farming about 2 million head of cattle in Austria. Most of these farms (70.1 %) housed cattle in stanchion tied stable with solid dung and liquid manure. The type of housing where animals are loose with solid dung and liquid manure was also very common, as it was recorded in 39.4 % of farms and accounted for 586 710 places (29 %).

As in many other EU Member States, in Austria the total number of places (2 386 850) exceeded the number of head of cattle. Accordingly, the hosting capacity of the country was not fully exploited in 2010, which explains why the related percentage was more than 100.

As many Austrian holdings include forest land, forestry work was the most common source of extra income in 2010 (see Table 9) – it was recorded on 39 310 farms. However, it must be noted that the previous waves of the FSS in Austria recorded agricultural and forestry activities together. In contrast, agricultural and forestry activities were recorded separately under the FSS 2010, which led to a break in time series[2].

In Austria, the first complete survey on agricultural and forestry holdings was conducted in 1902. The first Farm Structure Survey based on a random sample was carried on in 1993 and two years later the questionnaire was completely harmonised with the EU list of characteristics. Since then, Austria has conducted the FSS in compliance with the EU regulations. Statistics Austria was the responsible body for implementing the FSS 2010.

In Austria, the SAPM was conducted as an exhaustive survey together with the Agricultural census.

In Austria, both the FSS and the SAPM targeted all agricultural holdings with at least 1 hectare of agricultural area. In addition, farms with at least 0.15 ha of intensively utilised fruit orchards, or 0.1 hectares of land dedicated to the production of berries, strawberries, vegetables, hops, flowers or decorative plants, were also surveyed.

The thresholds set in 1995, following Austria’s accession to the EU, have been kept unchanged. Thus, they are compliant with the EU Regulation 1166/2008 and allow comparison between the FSS 2010 and previous waves.

In Austria, common land belongs to Agrarian communities, which are associations of real estate property owners who have common rights over a piece of land. In 2010, common land was included in special agricultural holdings – this methodology was also used in the previous waves of the FSS. Generally, the agricultural area on which common rights apply consists of grassland and it is farmed by the members of the agrarian community.

In Austria, the share of UAA designated as common land is fairly significant: 252 872 ha or 8.8 % of the country’s total UAA in 2 715 holdings. As the agrarian communities managing these areas own no livestock of their own (the livestock is in the possession of the individual members of the Agrarian communities), these holdings are designated as “General field cropping”, although their UAA mainly consists of grazing area. This issue should be kept in mind when interpreting the classification of farms by farming main types.

In Austria, information on the location of the holdings was collected by the National Statistical Institute through the use of administrative sources, i.e. the Address-Building and the Dwellings Register (ABDR). Once obtained, the coordinates were rounded to prevent the identification of single units.

From FSS 2007 onward, the Standard output (SO), a new classification of the economic size of the holding, is used. The SO has replaced the Standard gross margin (SGM) used before. Nonetheless, for comparability reasons, both classifications are available in FSS 2007.