This article presents some statistics from the most recent farm structure surveys (FSS) conducted in the European Union (EU) as an agricultural census in 2009/10. This was the first synchronised agricultural census across all EU-27 Member States, as well as Norway and Switzerland; a sample survey was also carried out in Croatia. 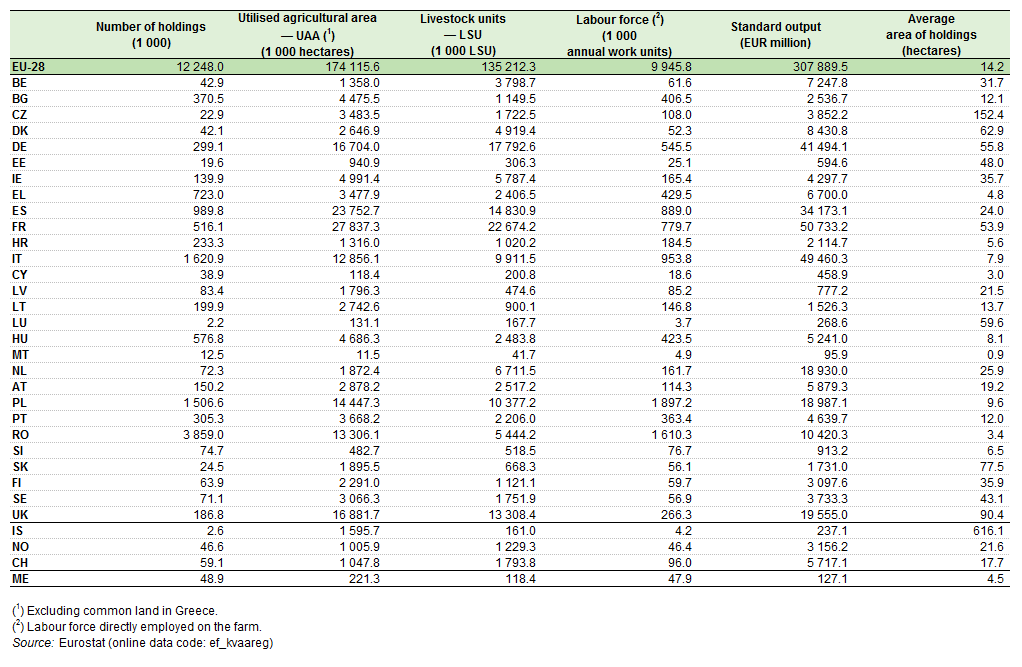 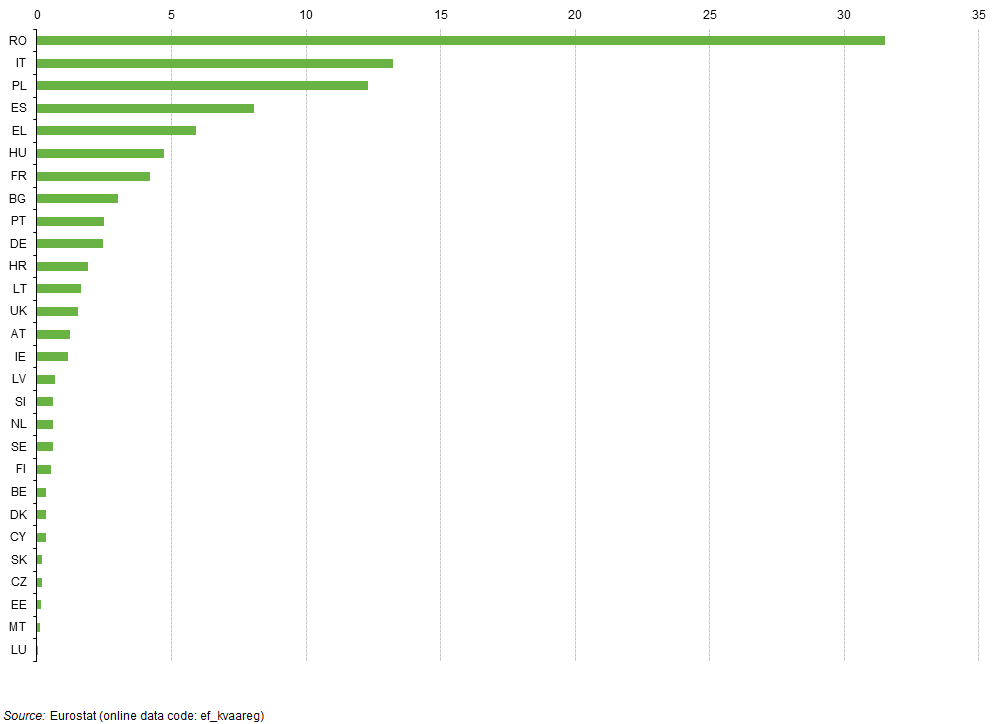 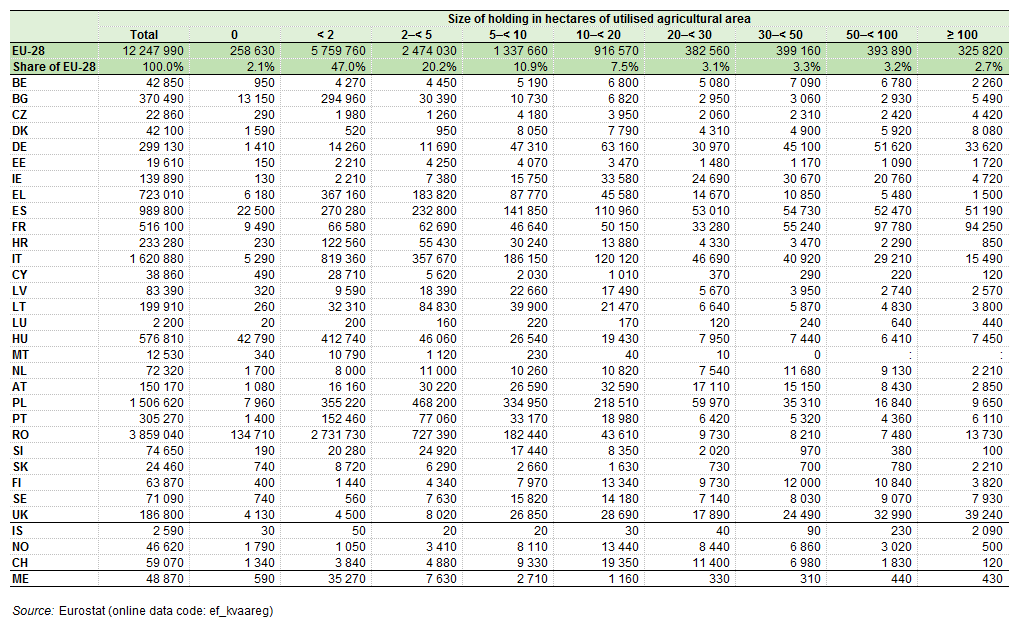 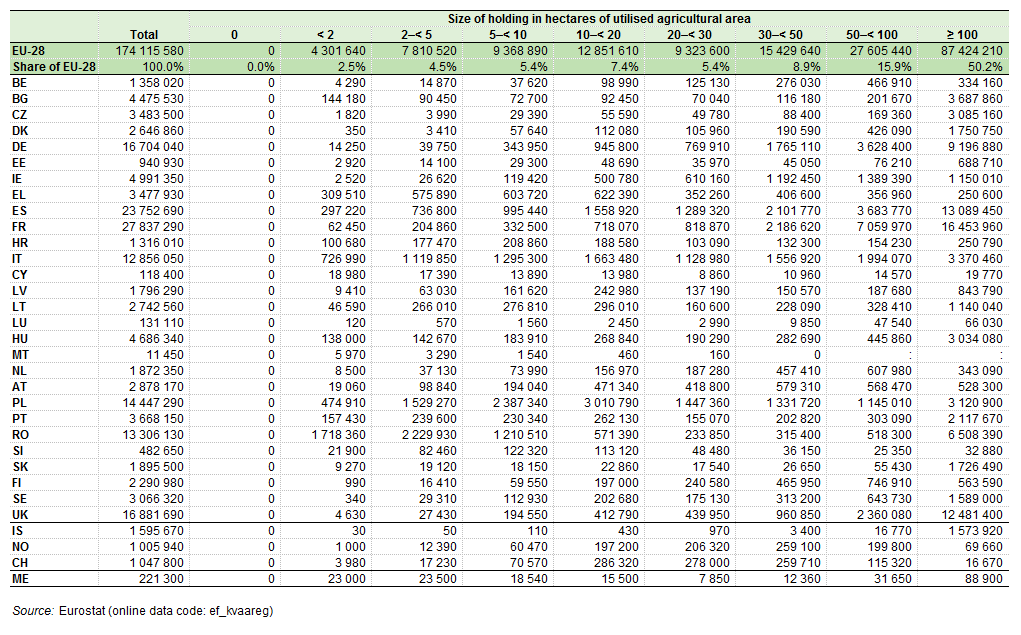 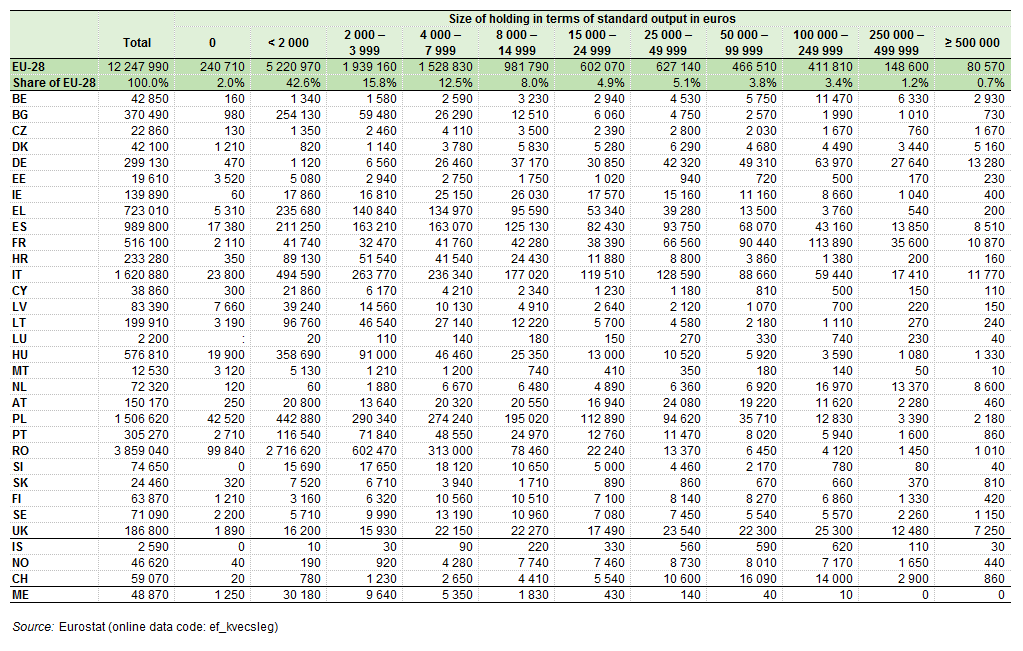 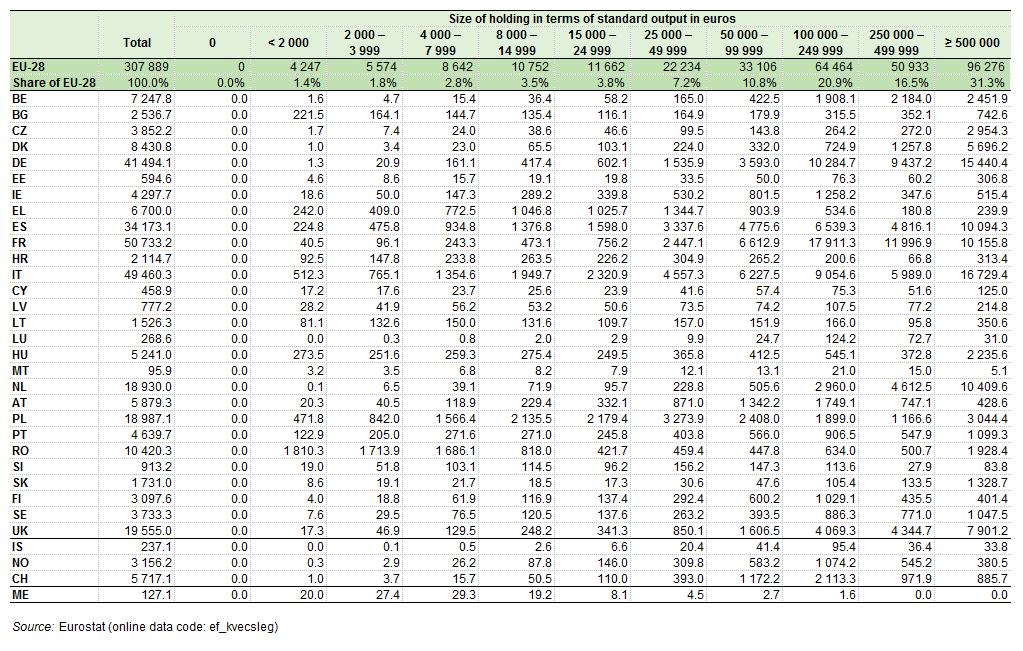 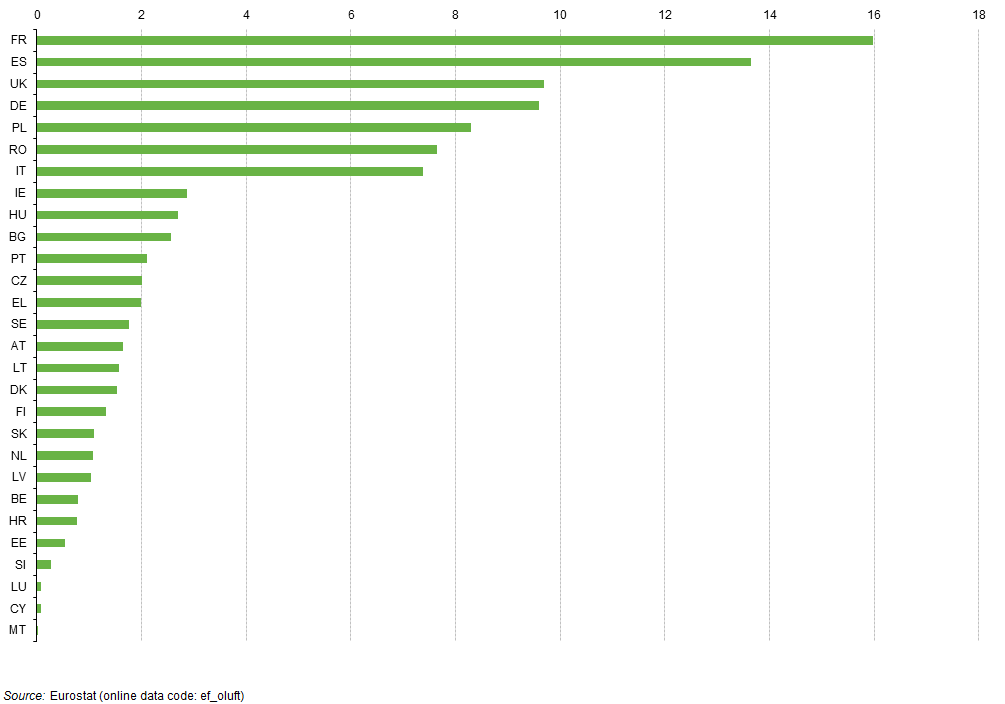 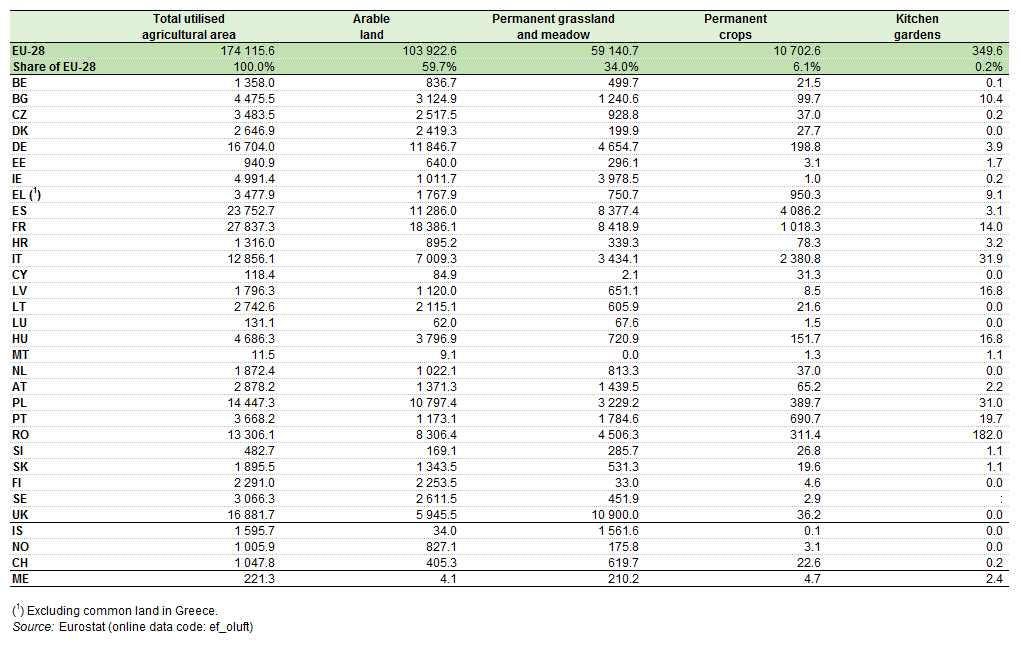 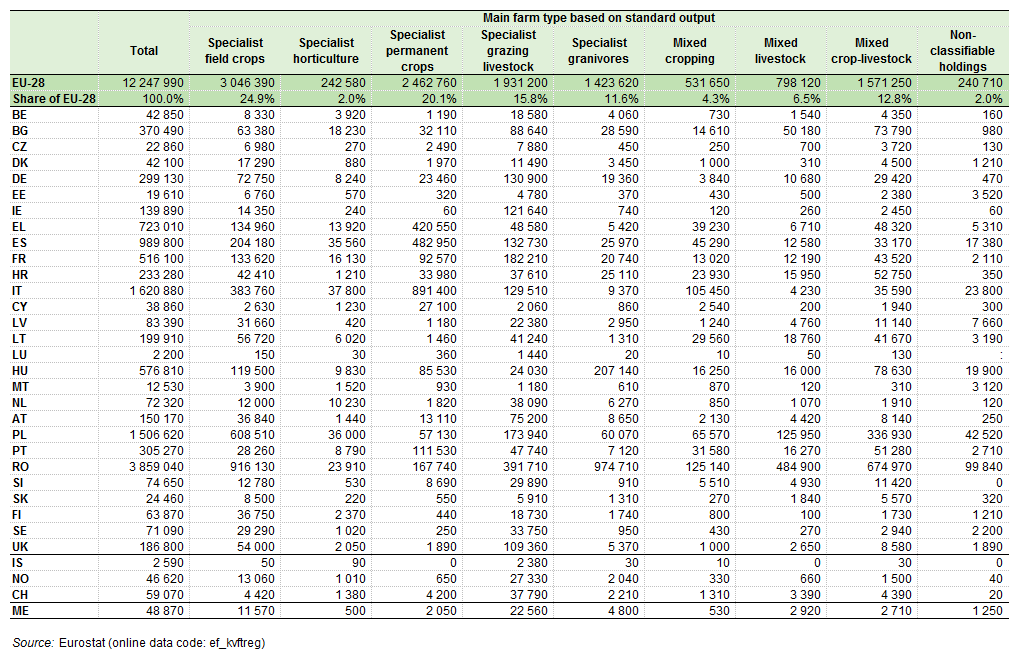 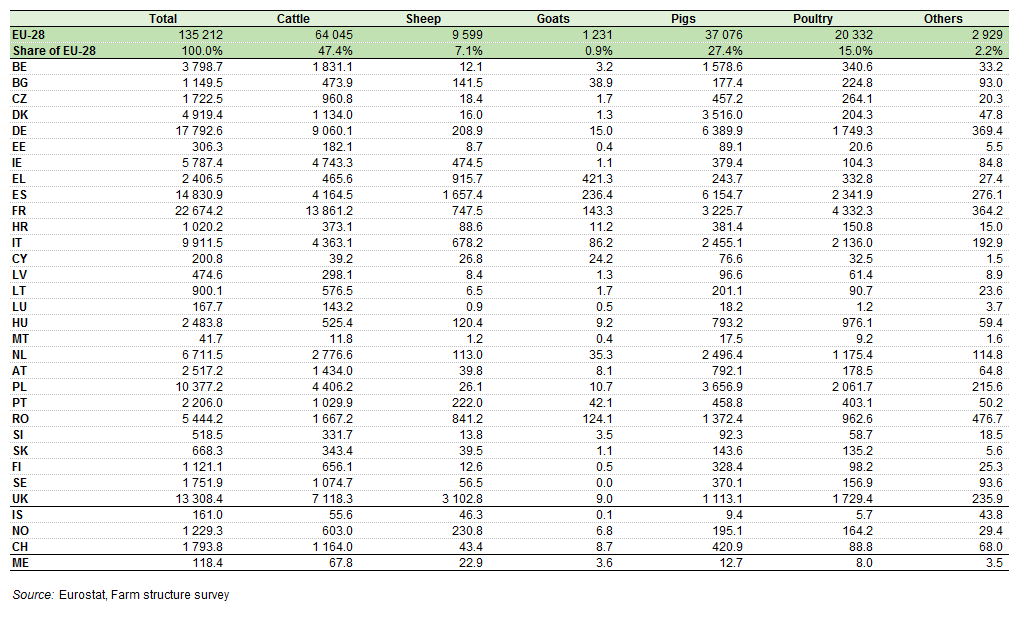 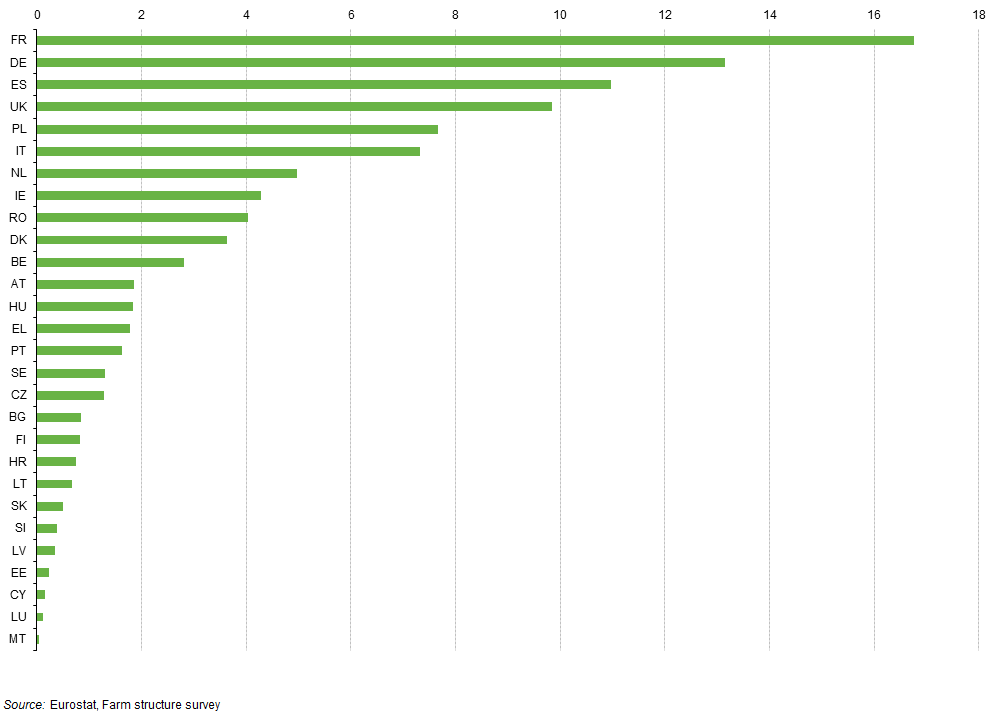 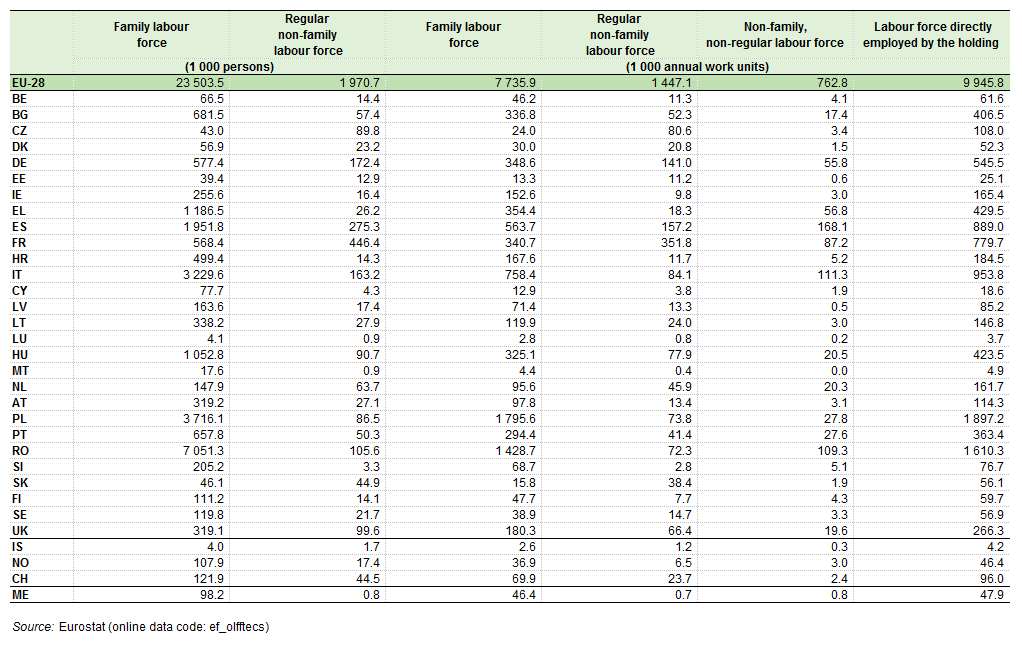 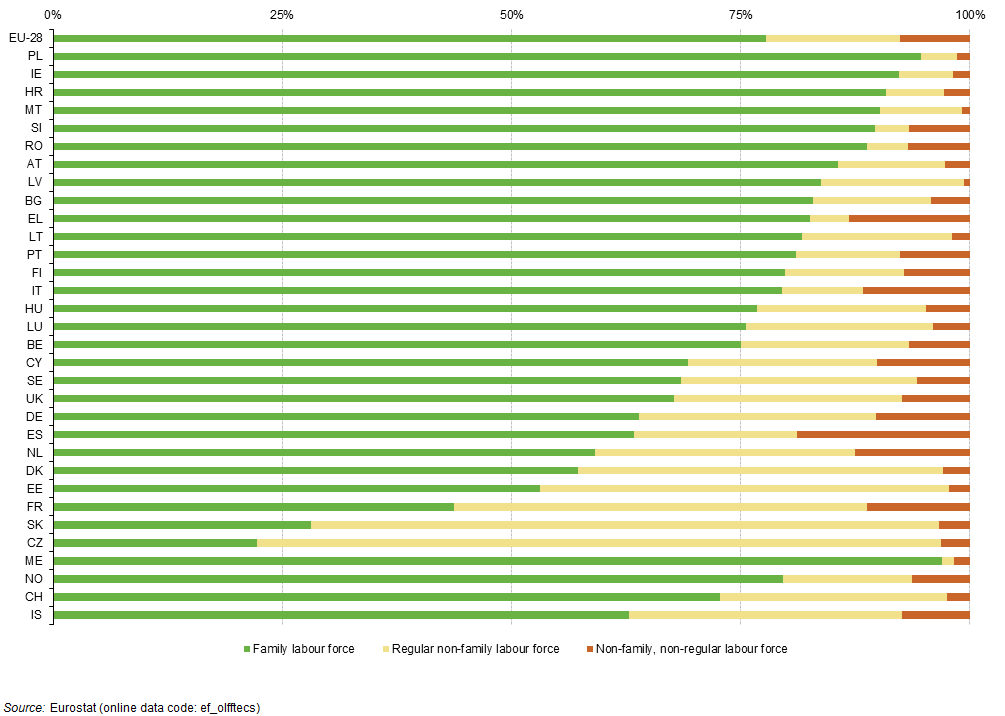 This coordinated effort has strengthened the coherent and comparable nature of the structural data. Nevertheless, it should be noted that some methodological changes were introduced for the latest census, which limit comparability with other survey years; the minimum size threshold for agricultural holdings was raised in some of the EU Member States, while ensuring that 98 % of the farmland (known as the utilised agricultural area) and livestock of each country were covered, and common land was included.

Three fifths (59.7 %) of the farmland in the EU-28 was used as arable land in 2010, a majority being used for cereal production. A further one third (34.0 %) was permanent grassland and meadow . Permanent crops, such as vineyards, olive trees and orchards, accounted for a 6.1 % share and kitchen gardens around 0.2 % (see Table 6).

The majority of farmland was used as arable land in 21 of the EU Member States, this share rising to above 90 % in Denmark and Finland. However, in Austria, Luxembourg, Slovenia, the United Kingdom and Ireland, where there are a high proportion of farms that specialise in grazing livestock, a majority of farmland was permanent pasture and meadow. The proportion of farmland occupied by permanent crops was relatively high in some of the Mediterranean countries, the highest shares (a little over 25 %) being in Cyprus and Greece.

In order to compare different livestock, a notional unit called a ‘livestock unit’ (LSU) is used. To calculate livestock units, a range of agreed weights are applied to the various types of farm animal to provide figures that are equivalent to one adult dairy cow or 10 sheep. On this basis, the ‘EU-28’s livestock herd’ was 135.2 million LSU in 2010, about one half (47.4 %) of which was cattle, a little over one quarter (27.4 %) of which was pigs and 15.0 % of which was poultry (see Table 8). Just over half (50.7 %) of the ‘EU-28’s livestock herd’ was located in just four Member States, namely: France, Germany, Spain and the United Kingdom (see Figure 3).

According to the EU’s labour force survey, agriculture, forestry and fishing employed 11.3 million persons aged over 15 in the EU-28 in 2010 (of which 1.1 million were over the age of 65), the equivalent of 5.2 % of all those employed. The agricultural census estimated that 25.5 million people worked regularly in agriculture, of which 23.5 million people were either the holder or members of the holder's family. After taking into account the amount of time actually worked and converting this into equivalents of full-time work (measured as annual work units), the census estimated that the equivalent of 9.9 million people worked full-time on farms in 2010 (see Table 9). The agricultural labour force (in full-time labour equivalents) was highest in Poland (19.1 % of the EU-28 total), Romania (16.2 %) and Italy (9.6 %).

Farming was predominantly a family activity in the EU-28; about three quarters (77.8 %) of the labour input in agriculture came from the holder or members of his/her family in 2010. In Malta, Croatia, Ireland and Poland, family labour accounted for over 90 % of the volume of work carried out in agriculture (see Figure 4). By contrast, there was a small number of countries for whom non-family labour accounted for a majority of the labour force in 2010: these included France (56.3 %), Slovakia (71.9 %) and the Czech Republic (77.7 %). Even in some countries where family labour provided a majority of labour, there were relatively large volumes of non-family labour: in particular, non-regular (seasonal) labour (often for picking perishable crops) represented between 10 % and 20 % of the total labour input within agriculture in Cyprus, Germany, France, Italy, the Netherlands, Greece and Spain.

The legal basis for the farm structure survey (FSS) is Regulation 1166/2008 of 19 November 2008. EU Member States collect information from individual agricultural holdings and, observing strict rules of confidentiality, data are forwarded to Eurostat. The information collected in the farm structure survey covers land use, livestock numbers, rural development, management and farm labour input (including the age, gender and relationship to the holder of the agricultural holding). The survey data can be aggregated by different geographic levels (for Member States, regions, and also districts). The data can also be arranged by size class, area status, legal status of the holding, objective zone and farm type.

The basic unit underlying the farm structure survey is the agricultural holding: a technical-economic unit, under single management, engaged in agricultural production. Although the thresholds for defining an agricultural holding can be different between countries (as high as five hectares of UAA in some cases), the survey covers 98 % of the UAA and the livestock of each country.

Source data for tables and figures on this page (MS Excel)