This Statistics Explained article is outdated and has been archived - for recent articles on Agri-environment indicators see here.

Agriculture and the environment

With about 40 % of the EU’s land area being farmed, agriculture has a very important impact on the natural environment. Farming can have beneficial influences on the environment, for instance in creating valuable landscapes and habitats. But inappropriate agricultural practices and land use can also have an adverse impact on natural resources, like the pollution of soil, water and air, fragmentation of habitats and loss of wildlife.

The links between the richness of the natural environment and farming practices are complex. AEI are used to quantify and describe these complex relations between agricultural and agri-environmental policies, agricultural practices and the environment. AEI assess trends over time of;

The Commission is developing 28 indicators following the Driving Forces - Pressures - State - Impact - Response model. The DPSIR concept is an analytical framework that has been developed at the European Environment Agency (Environmental indicators - Typology and overview, EEA, 1999) in order to describe and understand the inter-linkages between economic activities and the environment relating to farming practices, agricultural production systems, pressures and risk to the environment and the state of natural resources.

The driving force indicators contribute to a better understanding of the state and evolution of regional farming systems in relation to input use, land use and management practices. They also shed light on general farm trends (intensification/extensification, diversification, and marginalisation) that can affect the conservation of environmental resources in either positive or negative ways.

The driving force indicators relate to:

In this article a selection of the input use indicators are explained:

accounted for an estimated 40 percent of the increase in world food production[1].


Unbalanced fertilizer applications (applications of fertilizers exceeding plants’ nutritional requirements) and farming practices can lead to nutrient losses to the air, soil, ground and surface water. Nitrogen emissions add to climate change and acidification. High concentration of nutrients in water bodies can lead to eutrophication. In order to limit the negative impact of fertilizer and manure use on the environment, a number of legislative measures have been taken, such as the Nitrates Directive, the National Emission Ceilings Directive and the Water Framework Directive, including designation of nitrate-vulnerable zones where Member States have imposed regulatory limits on the load and timing for fertilizer (and manure) spreading on agricultural land.

Mineral fertilisers also have adverse environmental effects stemming from their production processes. More specifically, nitrogenous fertilizers — the fertilizers most commonly consumed — require large amounts of energy and ultimately cause greenhouse gas emissions. In a completely different way, phosphorus and potash fertilizers also have an environmental impact, since the raw materials used to produce them are mined, therefore inducing the typical damage associated with mining, e.g. landscape destruction, water contamination, excessive water consumption and air pollution. Phosphate rock reserves are limited and only found in a few countries in the world. The EU is almost completely depending for the production of phophorus fertilizers on import from reserves located outside the EU. In a report of the Plant Research Institute (Wageningen, the Netherlands) on global P resources it is estimated that with current P consumption today’s economically exploitable resources will be depleted within 125 years and total reserves within 340 years. In some regions of the EU soils are saturated with phosphorous (for instance parts of the Netherlands and Belgium), and risk of phosphorous leaching and run-off is high. In other regions (for instance parts of Mediterrenean and East European countries) soils are phosphorous deficient, and risk of soil erosion and loss of soil fertility are high. 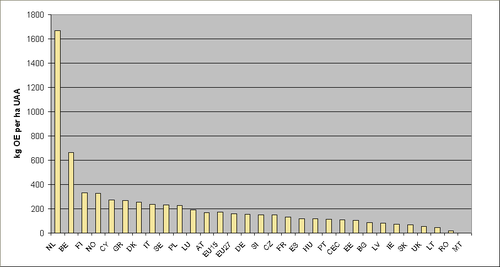 Energy consumption by agriculture Energy is consumed directly by agriculture with the use of machinery (e.g. cultivation of fields with tractors) and the heating of livestock stables and greenhouses. Agriculture also uses energy indirectly, for the production of agrochemicals, farm machinery and buildings. Considerable amounts of natural gas are used for th 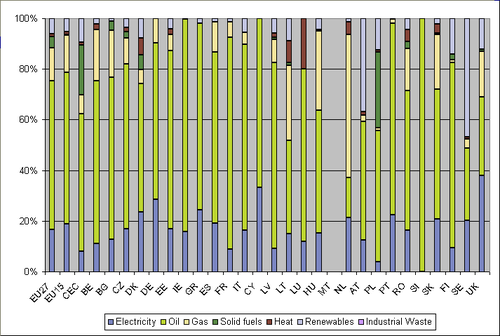 e production of inorganic nitrogen fertilisers. The use of machinery and mineral fertilisers has made it possible to increase agricultural productivity and food supply. However, agriculture, as an energy user, contributes to the depletion of non-renewable energy sources and to global warming (CO2 emissions from fossil fuel combustion). The EU 2020 Strategy aims at a reduction of greenhouse gas emissions of 20%, 20% share of renewables in energy consumption and 20% increase in energy efficiency by 2020.

At present no harmonised European statistics on mineral fertilizer use are available. In 2010 data have been requested from Member States with a specific Joint Eurostat/OECD Questionnaire on Agri-environmental Indicators. Member States have used different data sources to report total Nitrogen and Phosphorus use. Some Member States have carried out farmer surveys, others have estimated consumption from statistics on production and trade of mineral fertilizers. These data sources are however not comparable. Production and trade statistics may overestimate the actual consumption, as for instance the use of fertilizers by non-agriculture may be included. Surveys may suffer from sampling and other errors. Data on mineral fertilizer consumption from the Joint Questionnaire will be available in the Eurostat database as soon as possible. The European Fertilizer Manufacturers Association also estimates fertilizer consumption by agriculture, these data can be found under the heading Consumption estimate of manufactured fertilizers (source: Fertilizers Europe) in the Eurostat database.

Data presented in this article are not directly comparable to the data found in the database, as certain corrections (for instance to exclude fisheries/forestry) have been made based on data received from Member States, for example data on Denmark have been derived from the environmental accounts of Denmark and data on Norway from the energy accounts of Norway. Data from the Joint Eurostat/IEA/UNECE questionnaires in Germany were incomplete and estimations have been made based on data available in previous years.

Data on UAA are derived from the Farm Structure Survey.

Around 40 % of the EU’s land area is farmed. This fact alone highlights the importance of farming for the EU’s natural environment. The links between the two, however, are complex. On the one hand, farming has contributed over the centuries to creating and maintaining a variety of valuable semi-natural habitats and agricultural landscapes on which a wide range of wild species rely for their survival. On the other hand, agriculture also has an adverse impact on natural resources such as pollution of soil, water and air, fragmentation of habitats, and a loss of wildlife which can result from agricultural practices and land use.

This complex relationship has to be taken into account in integrating environmental concerns and safeguards into the Common agricultural policy (CAP), with particular attention paid to reducing the risks of environmental degradation through cross-compliance criteria (as a condition for benefiting from direct payments, farmers must comply with certain requirements, some related to environmental protection), incentives and targeted agri-environmental measures, in order to enhance the sustainability of agro-ecosystems.

The importance attached to assessing the interaction between agriculture and the environment is underlined by the fact that the European Commission adopted a list of 28 agri-environmental indicators (AEI) in 2006 in its Communication COM(2006) 508 final. The AEI are developed for monitoring the integration of environmental concerns into the common agricultural policy at EU, national and regional levels.