This article belongs to a set of statistical articles which analyse the structure, development and characteristics of the various economic activities in the European Union (EU). According to the statistical classification of economic activities in the EU (NACE Rev 1.1), the present article covers the production of aerospace equipment, corresponding to NACE Group 35.3, which is part of the transport equipment sector. The activities covered in this article are the manufacture of: 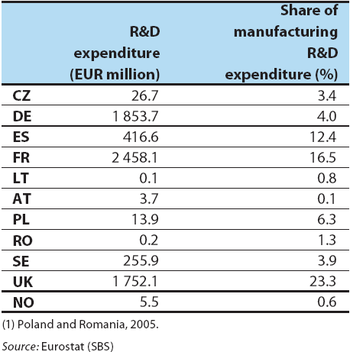 The evolution of the index of production for EU-27 aerospace equipment manufacturing followed a rather similar pattern to that for transport equipment manufacturing as a whole, although with slower growth after 2001. The effects of the general economic slowdown, coupled with a downturn in air transport after the terrorist attacks in the United States in September 2001, resulted in a relatively large contraction in output in 2002, and there was a smaller contraction in 2006.

Other data sources include Airbus and Boeing.

The transport equipment manufacturing sector is central to economic development, as it provides the means for transporting both individuals and goods. Demand for transport equipment has risen as the volume of goods transported and the distance travelled by passengers have expanded greatly – see the article on [Transport and storage statistics] for information on transport flows.

The issue of sustainable development is likely to play an important role in future product developments, as transport equipment manufacturers try to meet demands for more environmentally friendly transport solutions, for example, engines with lower fuel consumption or emissions.

Most transport equipment manufacturing activities are structured on the basis of complex pyramidal relationships between major manufacturers and several tiers of component suppliers, ranging from systems suppliers down to very small, specialised manufacturers that may provide a single component for a vehicle. It is common to find clusters of enterprises concentrated in regions around the leading producers.

The aerospace equipment manufacturing sector is highly concentrated within the EU and the United States, and within a few large manufacturers with a pyramidal supply chain: manufacturers of aircraft, missiles, space equipment and engines at the top of the pyramid, followed by a second-tier of suppliers making systems, medium-sized enterprises producing structural elements and components, and a final tier of SMEs producing materials, software and services (note that these may be excluded from data on this sector, as their principal activity may not be the manufacture of aerospace equipment). There are two main market segments for the aerospace sector, military and civilian, with the former dependent on government defence spending plans and the latter being a cyclical market.

Globally the main producers of civil aircraft are Boeing and Airbus; their delivery figures since 1989 clearly indicate the cyclical nature of this part of the sector.