The introduction of the European system of national and regional accounts (ESA 2010) has been a major event for the national accounts of the European Union (EU) Member States. The most notable methodological change to key national accounts indicators was the treatment of expenditure on research and development which is now recorded as gross fixed capital formation. A full description of all the changes between ESA95 and ESA 2010 can be found in the Manual on changes between ESA 95 and ESA 2010. The Member States also took the opportunity to rebenchmark their national accounts, review their data sources and introduce new or improved ones. Together with the changes introduced by the methodological update of ESA 2010, this led to — in most cases — significantly higher levels of gross domestic product (GDP), which were presented in a news release on 17 October 2014.

This article analyses the impact of ESA 2010 revisions focusing on nominal GDP at the European level. Observing the main aggregates of the three approaches used in estimating GDP at market prices, it includes an analysis of the industries which have generated significant revisions to gross value added (GVA), and continues with a similar analysis of the categories of final expenditure and of the components of income.

The level of nominal GDP for EU-28 was revised upwards by 3.7 % for the year 2010. Figure 1 shows revisions to the levels of nominal GDP. This revision was due to two main reasons. The first was the methodological changes introduced in ESA 2010. These increased the level of nominal GDP of the European Union by 2.3 % in 2010. The treatment of research and development and military weapon systems as capital formation were the main methodological drivers for the increase in GDP. Table 1 shows the main ESA 2010 methodological changes that had an impact on EU GDP for the year 2010. The second contributing factor towards the revisions to GDP was statistical improvements such as new and improved data sources. These statistical improvements increased GDP by 1.4 % for the same period. 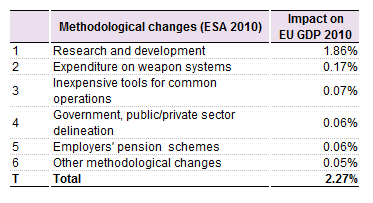 However, history has not been rewritten: data on economic growth are virtually unaffected, as shown in Figure 4. The annual GDP volume growth rates changed only by +/-0.1 percentage points. A more detailed analysis of the impact of ESA 2010 on the main GDP aggregates is presented in the sections below.

Figure 2 summarises how the ESA 2010 methodological improvements and the statistical improvements have contributed to the 3.7 % upward revision of the EU‑28 GDP in current prices, for the year 2010. 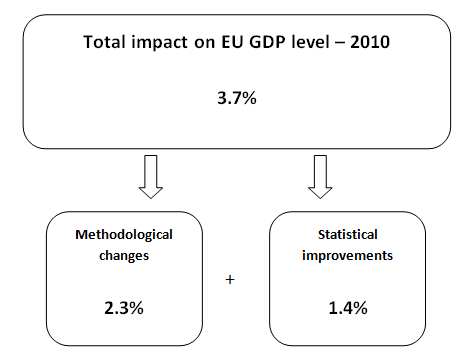 The revised treatment of small tools, such as saws, spades, knives, axes, hammers and other hand tools, where ESA 2010 eliminated the monetary threshold for the purchase of these items to be recognised as capital expenditure, accounted for a revision of 0.07 % and thus had the third largest methodological impact, while the change to the sector classification of government and the recording of employers’ pension schemes revised GDP up by 0.06 % each.

Figure 3 shows the impact of methodological changes and statistical improvements on the level of GDP in 2010 as a percentage of the individual 28 Member States’ GDP.

Figure 3: Impact of methodological changes and statistical improvements on the level of GDP, 2010 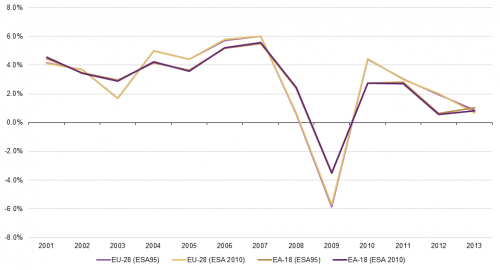 The production approach to GDP measures GDP as the sum of the values added by all activities which produce goods and services, plus taxes less subsidies on products. The value added can be broken down by type of activity or industry. Revisions were analysed at the A*10 NACE Rev. 2 industry breakdown given in Table 2.

Table 2: A*10 classification of industries 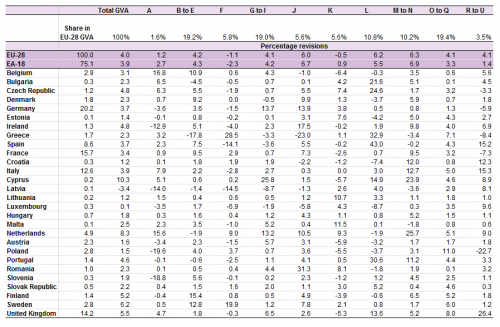 The implementation of ESA 2010 and associated statistical revisions increased the proportion of GFCF by 1.7 percentage points to 20.1 % of GDP, in 2010. This was mainly due to the treatment of research and development and military weapons systems, which were recognised as capital formation. Revisions to household and NPISH final consumption expenditure are mainly due to statistical improvements, such as embedding results from the recent population Census and new household budget surveys. 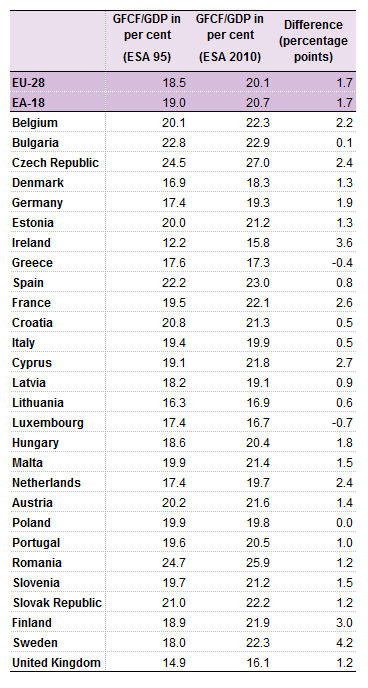 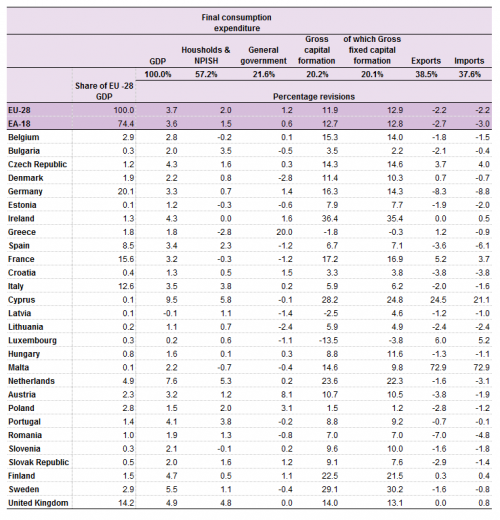 The revisions are somewhat larger (–2.7 % for exports and –3.0 % for imports) for the EA‑18 than for EU‑28. The biggest impacts on exports and imports were seen for two small island states: Malta and Cyprus.

Figure 6 shows the contributions to GDP revisions by the main expenditure components for each Member State.

Figure 6: Contributions to GDP revisions by expenditure component for 2010

Revisions to the income components of GDP

Under the income approach, GDP is measured as the total of all incomes earned in the process of producing goods and services plus taxes on production and imports less subsidies. These incomes are broken down by type, i.e. compensation of employment and operating surplus/mixed income. In ESA 95, compensation of employees accounted for just under half of GDP for both the EU‑28 and the euro area in 2010, while operating surplus and mixed income accounted for just under 40 % of GDP. For the same period, the implementation of ESA 2010 increased the proportion of operating surplus and mixed income in both the EU‑28 and the euro area by 1.7 percentage points.

Gross operating surplus and mixed income is by far the largest income component, contributing 3.2 percentage points of the total GDP revision in 2010 for the EU‑28 and 3.1 percentage points for the euro area. This is mainly due to the revised treatment of research and development and military weapons systems, which have been reclassified into capital expenditure. As a consequence of this change, these items are now recorded as GFCF and their value has been deducted from intermediate consumption. This resulted to an increase in GVA. This additional GVA has now been distributed back into the economy in the form of operating surplus for producers.

As shown in Figure 7, gross operating surplus and mixed income recorded the most significant contributions to GDP revisions in 2010 for Cyprus (9.4 %), the Netherlands (6.2 %) and Sweden (5.3 %). Gross operating surplus and mixed income made negative contributions to GDP revisions for the same period in Latvia (–2.3 %) and Luxembourg (–2.1 %).

Figure 7: Contributions to levels of nominal GDP by income component in 2010

A significant contribution from taxes less subsidies on production, in the GDP revisions, was observed in Sweden (+5.4 %). This was due to a reclassification of social contributions to payroll taxes.

Additional information on the dissemination of ESA 2010 data is available in the database section National accounts (ESA 2010) (na10).

The analysis in this article is based on the first ESA 2010 data transmitted in September 2014 and compares them to the last ESA 95 based transmissions. Comparisons focus on the year 2010 because National Statistical Institutes carried out a detailed analysis of the causes of revisions for this reference year. Each country completed a questionnaire, which was used by Eurostat to identify the respective driving forces at the level of the European aggregates.

The European System of Regional and National Accounts (ESA 2010) is the fundamental methodological rulebook in the European Union explaining how Member States’ economies should be measured in a consistent, coherent, comparable and reliable way. The last twenty years have seen significant changes to the way the global and domestic economies operate. The methodological changes introduced in ESA 2010 should therefore be seen as a necessary adaptation to a changing world. The adaptation of the national accounts is not only European, but world‑wide. Europe’s ESA 2010 counterpart is the 2008 System of National Accounts (SNA 2008) which was adopted by the United Nations Statistical Commission and has already been implemented in Australia in 2009, Canada in 2012, the USA in 2013 and New Zealand in 2014. ESA 2010 is defined in Regulation (EU) No 549/2013 of the European parliament and of the Council of 21 May 2013 on the European system of national and regional accounts in the European Union.