Biggest recovery in the number of commercial flights in Q2 2022.

In the first half of 2022 there were 338 million passengers carried at the EU level, almost as much as in the entire 2021.

All EU Member States keep registering increasing number of air passenger transport in the first semester of 2022 compared to the same period in 2021. 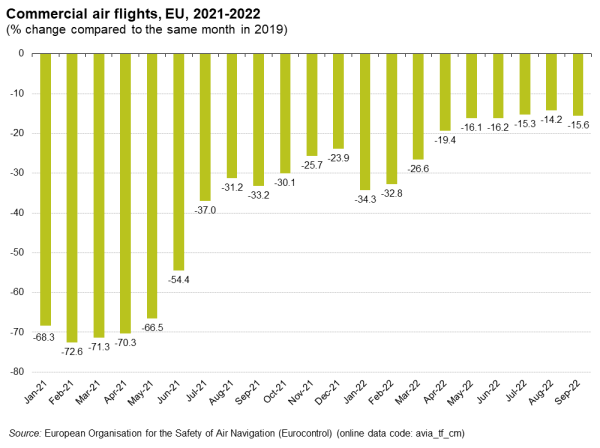 This article describes the recent monthly development of commercial air flights and passenger transport by air in the European Union (EU), as well as in the EFTA countries Iceland, Norway, Switzerland and in the Candidate countries Montenegro, North Macedonia, Serbia and Türkiye. A distinction is made between national (domestic), intra and extra-EU transport, while looking at the evolution of airport traffic.

Biggest recovery in the number of commercial flights in Q2 2022

To prevent the spread of the COVID-19 pandemic, countries around the world have taken a variety of restrictive measures since the beginning of 2020. The air transport industry was severely hit. As from the second half of 2021 restrictive measures have been gradually removed. That has encouraged people to re-start travelling by planes again and impacted commercial air traffic.

The impact of COVID-19 pandemic is still clearly visible in 2021, with large decreases in the total number of commercial flights (passengers, freight and mail) in the EU compared with the same month in 2019 (Figure 1). In the second half of 2021, there are already visible signs of recovery that are repeated in the first 6 months of 2022. In the second quarter of 2022, the smallest decreases compared with the same months of 2019 are from -19.4 % in April to around -16 % in May and June.

In the first half of 2022 there were 338 million passengers carried at the EU level, almost as much as in the entire 2021

Figure 3 shows that an increase in passenger transport was registered for every month of 2021 as well as for the first six months of 2022 compared to the same month of the previous year, with the exception of January, February and March 2021. February, March and April 2022 registered again large increases compared to the same month of 2021. It has to be noted that the number of passengers were still very low in 2021especially for February and March. 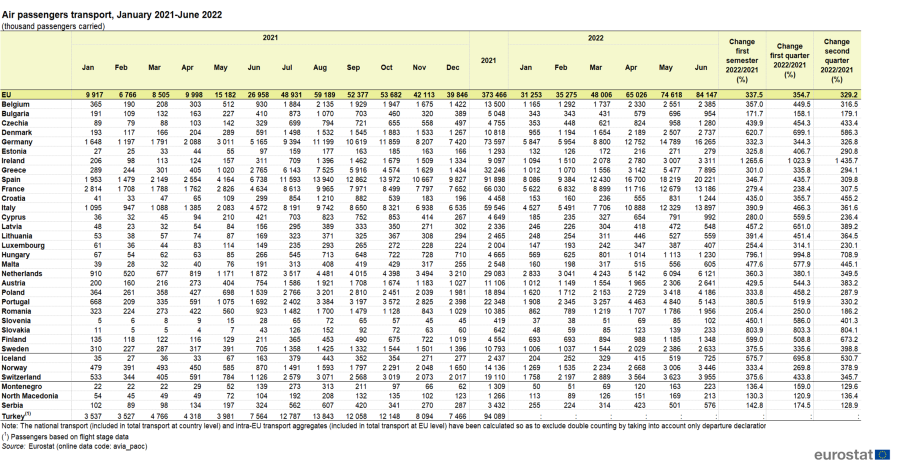 All top EU 30 airports showed signs of recovery in 2022

Table 2 presents the evolution of air passenger transport in the top 30 EU airports. The ranking of the airports was established based on the total annual passengers carried in 2021.

Paris Charles de Gaulle airport, that keep the first position in the ranking for the entire semester of 2022, increased of more than 275 % in number of passengers carried. The airports of München, Roma Fumicino, København/Kastrup and Stockholm/Arlanda serviced more passengers between January and June 2022 than in the 12 months of 2021.

All the airports in the top 30 registered an enormous increase in first six months of 2022 compared to same period of 2021. Between January and May 2022 Dublin airport recorded more passengers than in the entire 2021. It also recorded the biggest increase of 1139 % in the first semester of 2022 compared to the same period of 2021. Number of passengers serviced at Danish København/Kastrup and Spanish Alicante airport increased respectively by 578 % and by 528 % in the same period. The lowest increase was for Romanian Bucuresti/Henri Coanda airport (+181 %), 12 airports recorded increase between 200 and 300 % and another 12 – between 300 and 400%.

All passengers on a particular flight are counted once only and not repeatedly on each individual stage of that flight. This excludes direct transit passengers.

The content of this statistical article is based on data collected within the framework of the air transport statistics Regulation (EC) No 437/2003 on statistical returns in respect of the carriage of passengers, freight and mail by air.

The basic legal act was amended by: