Tweet
In 2020, there were 146 million pigs, 76 million bovine animals and 75 million sheep and goats in the EU.
Tweet
Just over half of the EU’s meat production was from pigs (23.0 million tonnes) in 2020.
Tweet
The EU produced 13.6 million tonnes of poultry meat in 2020, a new high.
[[File:Agricultural production - livestock and meat November 2021.xlsx]]

This article presents information on livestock and meat production in the European Union (EU).

The livestock population at any given moment describes the production system through the stocks of animals being farmed. The duration of a production cycle indicates how long is needed so that animals are ready to slaughter for meat, whilst others are being reared, or to give birth and in the case of cows, some sheep and goats can be milked.

The typical life-span of each of these groups in the cycle varies. For example, veal calves will typically be slaughtered within eight months, beef cattle within the first two and a half years and dairy cows within five years.

Detailed figures on the age, sex, category and type of animals in production cycles are collected at a regional and national level. This is done through livestock surveys that are either carried out once or twice a year.

In this article only aggregated data for national livestock herds are analysed. More detailed figures for analysis are available in Eurostat’s free, online database.

Majority of livestock populations concentrated in just a few countries

The EU has a sizeable livestock population: in 2020, there were 146 million pigs, 76 million bovine animals and 75 million of sheep and goats.

A majority of the EU’s livestock is held in just a few of the Member States (see Figure 1).

Some of the EU Member States are relatively specialised in terms of livestock farming. For example, Ireland accounted for 8.5 % of the EU’s bovine animals in 2020 (almost the same level as recorded in Spain), while Denmark accounted for 9.2 % of the EU’s pig population (almost the same level as in France). After Spain, the second and third largest sheep populations in the EU were in Romania and Greece, with 16.8 % and 13.2 % shares respectively. 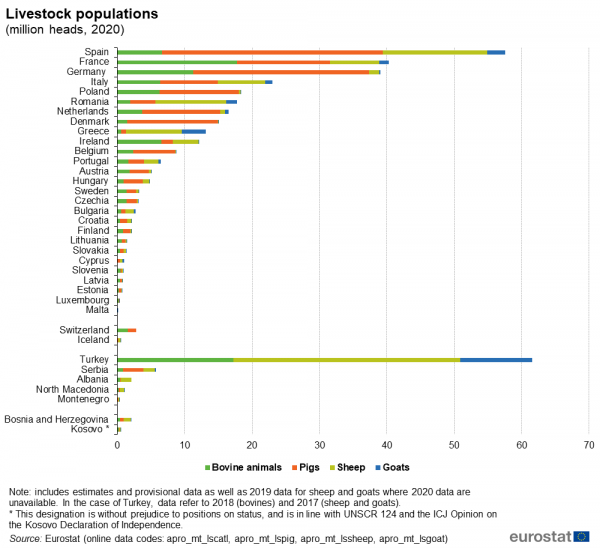 During the last two decades, there has been a decline in livestock populations across the EU (see Figure 2). Between 2001 and 2020, the EU’s total livestock count for pigs, bovine animals, sheep and goats fell by an estimated 8.9 %. The number of head declined for each livestock population during the period under consideration: the largest overall decline (in percentage terms) was recorded for the number of sheep, while the reduction in pig numbers was relatively modest. 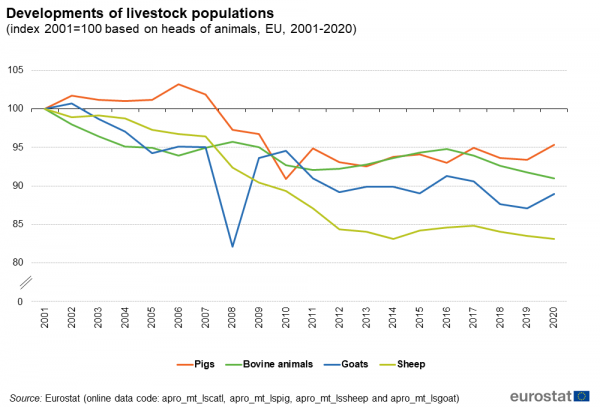 During the period 2015-2020, EU output price developments were relatively stable for most animals, with the price of pigs being the main exception (see Figure 3). Having risen at a rapid pace between 2016 and 2017, output prices for pigs then fell back in 2018 before rebounding in 2019 and falling again sharply in 2020. Throughout the period from 2016-2019, output prices for sheep and goats remained below their average level for 2015, but then grew at a rapid pace in 2020 (up a provisional 7.8 % as a year-on-year average). Having fallen relatively sharply in 2016, output prices for poultry remained relatively stable in 2017, 2018 and through to the 2nd quarter of 2019 before falling again; in 2020 the average price over the year was 2.9 % less than the average in 2019. The output price of cattle was relatively unchanged, although price developments followed a downward path in both 2019 and 2020. 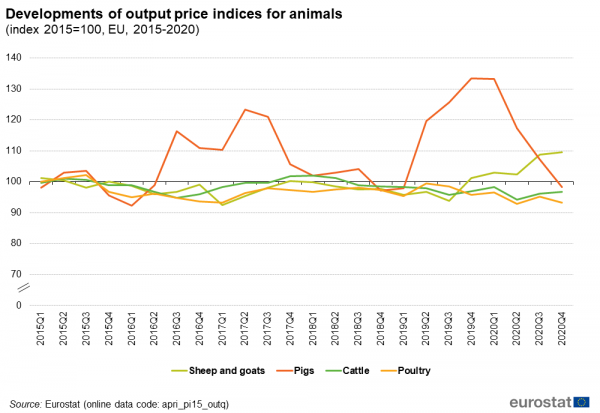 Better animal welfare improves animal health and food quality. Within the context of the EU’s Farm to Fork Strategy, the European Commission plans to revise legislation concerning the slaughter of animals so that it is aligned with scientific evidence, broadening its scope, making it easier to enforce, and ultimately ensuring a higher level of animal protection/welfare.

Data is collected on the number and weight of carcasses at slaughterhouses, whose meat is deemed fit for human consumption. In this article, ‘meat’ should be understood as the carcass weight from slaughterhouses.

The two main pigmeat producing Member States are Germany (5.1 million tonnes in 2020) and Spain (5.0 million tonnes). Whereas production in Germany further declined in 2020 (down -2.2 %), a fourth successive annual contraction, it rose sharply once again in Spain (+7.8 %, a seventh successive year of growth). There was also another year of growth in the Netherlands (+2.0 %).

Poultrymeat production in EU at high in 2020

The EU produced an estimated 13.6 million tonnes of poultrymeat in 2020, a new high. Against the backdrop of an upward trend, this represented a further 2.3 % rise in production compared with 2019. It pushed EU production some 4.2 million tonnes above the level recorded in 2004, a cumulative rise of about 45 %. 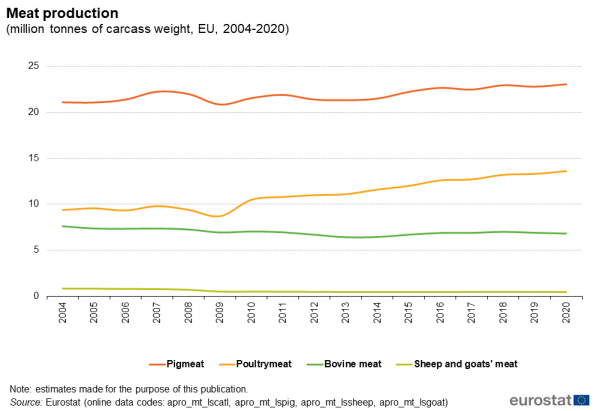 Beef is the meat from the slaughter of bovine animals of at least one year old. Certain cattle breeds are reared specifically for their beef, although beef can also come from dairy cattle. In this article veal is considered as the meat from bovine animals younger than one year (usually male calves and young cattle). Male calves from dairy cows are of no use for producing milk and their growth potential for producing beef meat is not optimal.

Further dip in production of bovine meat in 2020

The EU produced a provisional 6.8 million tonnes of bovine meat (beef and veal carcasses) in 2020, which was slightly less (-1.2 %) than in 2019. This decline should be seen in the context of steady rises that came after the end of milk quotas on 31 March 2015, as it has led directly to increased cow slaughter, with some of the smallest farms abandoning dairy production. Before then, there had been a downward trend in bovine meat production through to 2013, which now appears to have restarted (see Figure 4).

The EU produced an estimated 0.5 million tonnes of sheep and goats' meat in 2020, which was 3.9 % less than in 2019. Sheepmeat accounted for the vast majority (about 90 %) of the combined total output. 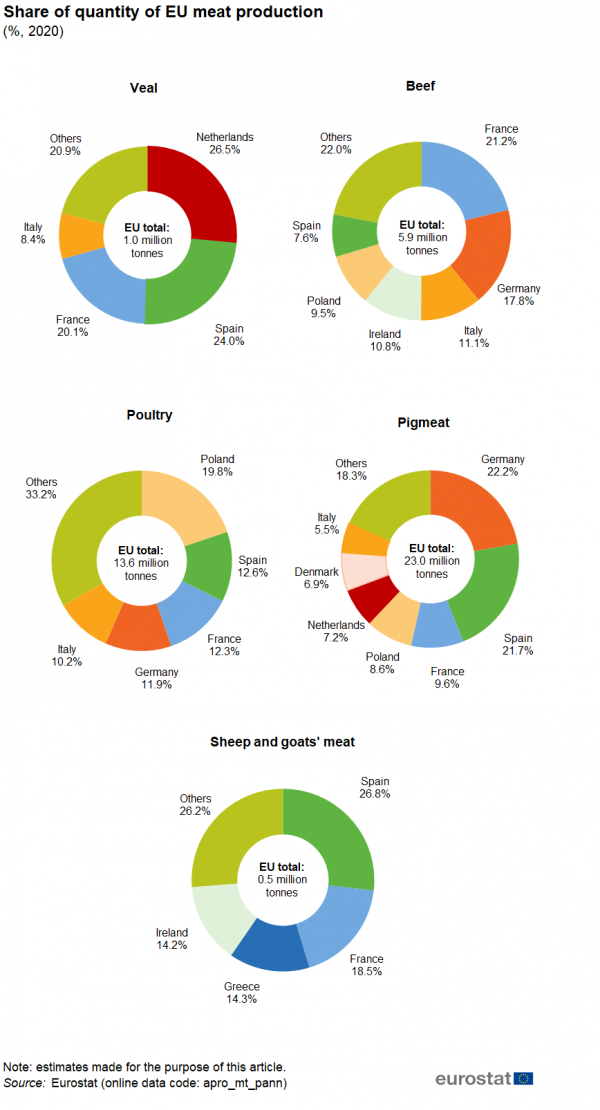 Livestock and meat statistics are collected by EU Member States under Regulation (EC) No 1165/2008, which covers bovine, pig, sheep and goat livestock; slaughtering statistics on bovine animals, pigs, sheep, goats and poultry; and production forecasts for beef, veal, pigmeat, sheepmeat and goatmeat. Livestock surveys cover sufficient agricultural holdings to account for at least 95 % of the national livestock population, as determined by the last survey on the structure of agricultural holdings.

Sheep livestock statistics are only produced once a year, with reference to a given day in November/December, by those EU Member States whose sheep populations are 500 000 head or above; the same criteria and thresholds apply for statistics on goat populations.

EU agricultural price statistics (APS) are based on voluntary agreements between Eurostat and the EU Member States.

National statistical institutes or Ministries of Agriculture are responsible for collecting absolute prices and calculating corresponding average prices for their country, as well as for calculating price indices and periodically updating the weights.

Statistics on livestock and meat production (based on the slaughter of animals fit for human consumption) give some indication of supply-side developments and adjustments, which are important for monitoring the common agricultural policy (CAP).

One of the objectives of the first CAP was to secure the availability of food supplies for the people of the then European Economic Community. The CAP has evolved, requiring more agricultural market transparency for all actors and EU citizens. Statistics for livestock and meat, as with other agricultural products, help provide feedback on market signals.

In order to limit uncertainty, EU institutions in charge of market support interpret the market signals using livestock numbers for their forecasts. The number of breeders (for dairy or meat production) as well as animal stocks being grown and fattened, contribute to preparing measures that ensure a more stable — or at least more secure — market, which aims to benefit both EU consumers and farmers.

The EU has introduced a range of legislation covering the traceability of livestock, in part as a response to various food safety concerns. For most animal species, this traceability concerns a system of identification — usually through ear-tags or tattoos — coupled with a national register that details animals as they are reared, held or handled at each stage of the food chain. The European Commission has been active in harmonising animal health measures and systems of disease surveillance, diagnosis and control; it has also developed a legal framework for trade in live animals and animal products. Ensuring the high quality of food is one of the various challenges to be met in order to secure this food supply.

As part of the EU’s Farm to Fork Strategy, the European Commission is in the process of drafting a proposal to revise the Feed Additives Regulation ((EC) No 1831/2003) with the goal of reducing the environmental impact of livestock farming. For example it will examine rules to lessen dependency on feed materials grown on deforested land, and aim to replace these with EU-grown plant proteins and alternative feed.