The gross nitrogen balance per hectare of utilised agriculture area for the EU decreased by 10 % from 2004-2015. 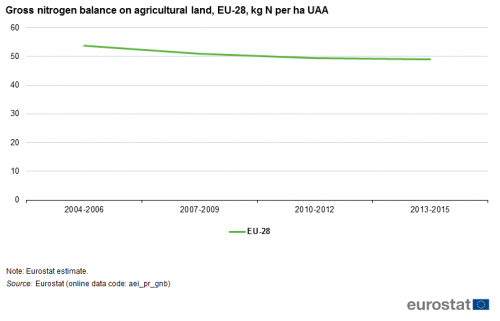 This article provides a fact sheet of the European Union (EU) agri-environmental indicator gross nitrogen balance. It consists of an overview of recent data, complemented by all information on definitions, measurement methods and context needed to interpret them correctly. The gross nitrogen balance article is part of a set of similar fact sheets providing a complete picture of the state of the agri-environmental indicators in the EU.

The inputs of the gross nitrogen balance consist of mineral fertilisers, manure and organic fertilisers, atmospheric deposition, biological nitrogen fixation and seeds and planting material. Mineral fertilisers accounted for 45 % of the nitrogen input in the EU in 2014 (country data are not complete for 2015, therefore 2014 values are used for this section). Manure accounted for 38 % of the nitrogen input in the same year. The nitrogen input from seeds and planting materials is negligible. The re-use of nitrogen through the use of compost, sewage sludge, industrial waste etc. is also quite insignificant. Data on other organic fertilisers (except manure) are lacking in many countries and significance of these fertilisers could be underestimated. Data is mostly lacking on manure withdrawals, i.e. manure removed from agriculture and reused elsewhere. Biological nitrogen fixation is on average 6 % of total nitrogen input in the EU-28. The level of atmospheric deposition depends on ammonia (NH3) emissions (of which agriculture is the main source), nitrogen oxides (NOx) emissions (where the contribution of agriculture is not significant) and climate conditions (transport through air to other regions). Atmospheric deposition was on average 8 % of total inputs in the EU-28.

As explained in the section on Data used and methodology the current balances are not comparable between countries due to differences in definitions, methodologies and data sources used by countries. In this section, some trends at Member State level are highlighted.

Few countries showed an increasing trend in GNB when monitored as 3-year averages from 2004-2015. Only the Czech Republic, Cyprus, Latvia and Austria (Table 1) belonged to this group, and the increases are moderate. A decreasing trend was shown in nine EU countries; Denmark, Greece, France, Croatia, Lithuania, Malta, the Netherlands, Sweden and the United Kingdom, over the same years 2004-2015. For Greece, France, Malta and the Netherlands the decrease stagnated over the years 2010-2015. Four EU countries: Italy, Poland, Portugal and Slovenia, as well as the EFTA countries Norway and Switzerland, had a stable trend from 2004-2015 with no real changes. No clear trend could be identified in the remaining 11 EU countries: Belgium, Bulgaria, Germany, Estonia, Ireland, Spain, Luxembourg, Hungary, Romania, Slovakia, and Finland. Here, the 3-year averages increased or decreased from data point to data point without consistency. 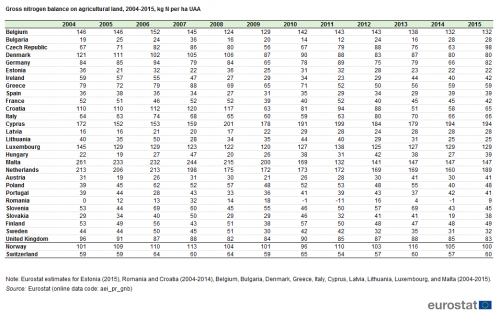 The highest value of NUE does not necessarily mean the best and desirable results. Rates which may be close to or above 1.0 would indicate a risk of soil depletion, as the nutrient uptake by crops exceeds the amount of nutrients applied to the soil. From a longer-term perspective, this trend cannot be considered sustainable.

The development of the NUE indicator is still in progress. For proper interpretation, NUE should be reported together with the nitrogen output in harvested products (as indicator for the productivity of the system), and the nitrogen surplus (as proxy for the potential nitrogen loss to the environment).

Figure 2 shows that the overall NUE in the EU-28 increased only slightly between 2004-2006 and 2012-2014. It could indicate improved utilisation of nutrients applied to the field in a considerable number of Member States. Figure 2 also shows that in most countries the average NUE 2012-2014 had increased compared to the period 2004–2006. 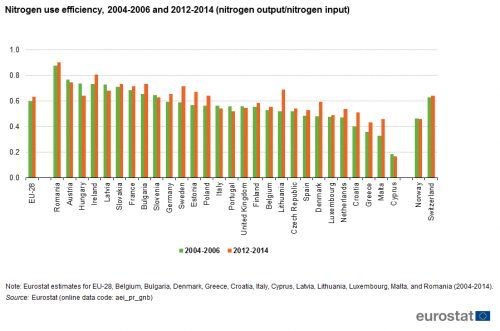 The evolution of NUE as the aggregate for EU-28 between 2004 and 2014 is shown in Figure 3a, and nitrogen output in harvested products in Figure 3b. NUE and nitrogen output in harvested products have roughly the same development, which is inversed to the GNB over the same time period (Figure 3c). In summary, the trends indicate that while the nitrogen losses to the environment are slightly decreasing the productivity is slightly improving in the EU-28, as is the nutrient use efficiency. 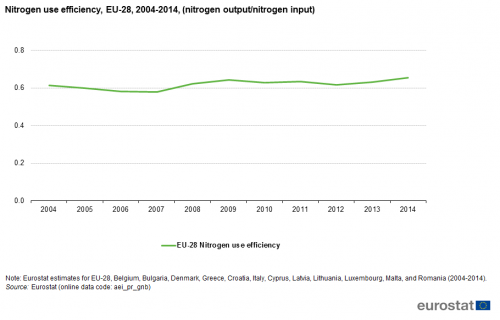 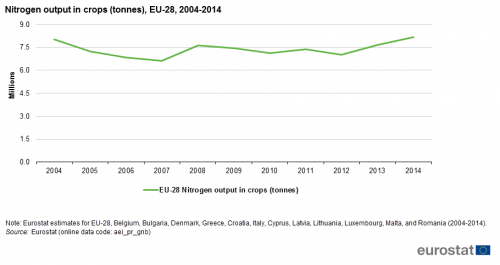 The NUE indicator may be useful for presenting how different strategies can contribute towards improving relative utilisation of nutrients applied to agricultural production systems, depending on the initial situation. Depending on context, both intensification and extensification strategies may contribute. In some contexts the main drive may be to increase food production and resource use efficiency, in other contexts the priority may be to protect soil and habitats from degradation.

Potential surplus of nitrogen on agricultural land (kg N per ha per year).

Due to missing data nutrient balances have been estimated by Eurostat for several countries and several years (Table 1). These estimations were based on data available in Eurostat's dissemination database, international public data collections, and published research, and confirmed with the countries in question as reasonable estimates. For 2015, no detailed estimates have been made and therefore no detailed analysis covers this year.

The inputs of the nitrogen balance are:

The outputs of the gross nitrogen balance are:

The nitrogen input and output is estimated for each item of the balance from basic data by multiplying with coefficients to convert the data into nitrogen content. Basic data (fertiliser consumption, livestock numbers, crop production, agricultural area) are mostly derived from agricultural statistics. Coefficients are mainly estimated by research institutes and can be based on models, statistical data, measured data as well as expert judgements.

Climatic conditions have a big impact on the balance through the impact on yield and therefore nitrogen output. Climate and weather conditions are beyond the control of the farmer. To dampen the effect of weather conditions on the balance the results presented in this fact sheet with regards to the nutrient balance are presented not referring to a particular year but as an average for a certain period. Input prices can have the same distorting effect.

While several human activities influence water quality, agriculture remains a major source of water-related problems. Since gross nutrient balances provide information on the links between agricultural input use, such as nitrogen, loss of nutrients to the environment and the sustainable use of soil nutrient resources, it is one of two main indicators for the EU Common Agriculture Policy's Context indicator 40: water quality.

The 7th Environment Action Programme (EAP) calls for further efforts to manage the nutrient cycle in a more sustainable way and to improve efficiency in the use of fertilisers. Nitrogen balance on agricultural land is used as an annual indicator in support to the monitoring of the 7th EAP.

Eurostat is responsible for the regular monitoring of progress towards the Sustainable Development Goals (SDG) in an EU context. The EU SDG indicator set, developed in cooperation with a large number of stakeholders, comprises 100 indicators and is structured along the 17 SDGs. Gross nitrogen balance is one of the indicators under SDG 2 "Zero Hunger".

Eurostat provides EU-28 data on nitrogen balance to the OECD for use in the OECD indicator set on agri-environment.

Several other policies are indirectly linked to the gross nitrogen balance:

The gross nitrogen balance indicates the total potential risk to the environment (air, water and soil). The output side of the balance presents the nutrient uptake by harvested (and grazed) crops and fodder, and crop residues removed from the field; i.e. the agricultural production from the soil. The input side of the balance counts all nitrogen supplied to the soil. Sustainability could be defined by preserving and/or improving the level of production without degrading the natural resources. The harvest and grazing of crops and fodder means that nutrients are removed from the soil. To sustain soil fertility this removal of nutrients should in principle be compensated by supplying the same amount of nutrients. Fertilisers and manure are therefore necessary to supply the crops with nitrogen for growing.

However, not all of nitrogen in fertilisers and manure reaches the crop. Part of the nitrogen is lost due to volatilisation in animal housing, storage and during application to the land. Moreover, organic nitrogen in manure first needs to be mineralised before being available to the crop, which means that part of the nitrogen may need different amounts of time for being available to plant (depending on soil characteristics and climate conditions – temperature and precipitations). Yield and therefore the uptake of nitrogen by crops is not only determined by inputs but also by non-controllable factors like weather. Furthermore, the risk of nitrogen leaching and run-off does not only depend on the nitrogen excess, but also on the type of soil, precipitation rates, soil saturation, temperature, etc. Abating measures to reduce nitrogen emissions directly impact the amount of nitrogen in manure and fertilisers applied to the soil. A higher emission rate means lower nitrogen content of manure/fertilisers applied to the soil, but means a higher contribution to environmental problems related to GHG and NH3 emissions. Lowering the emission rate means increasing the rate of nitrogen in manure/fertilisers, and therefore increasing the potential risk of leaching and run-off.

Therefore, the estimated nitrogen surplus by itself does not determine the actual risks to the air, water and soil. The actual risk depends on many factors including climate conditions, soil type and soil characteristics, soil saturation, management practices such as drainage, tillage, irrigation, etc. However, the gross nitrogen balance indicator presents a link between the agricultural activities and the environmental impact and identifies the factors which determine the nitrogen surplus and shows the change over time.