It is projected that there will be close to half a million centenarians in the EU-27 by 2050.

Women outnumber men at older ages within the EU-27 population: in 2019, there were more than twice as many very old women (aged 85 years or more) as very old men. 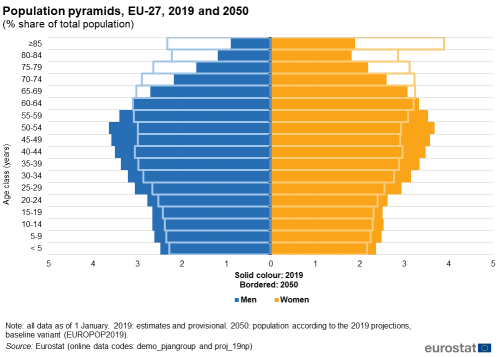 Ageing Europe — looking at the lives of older people in the EU is a Eurostat publication providing a broad range of statistics that describe the everyday lives of the European Union’s (EU) older generations.

Europeans are living longer than ever before and the age profile of society is rapidly developing. Demographic ageing means the proportion of people of working age in the EU is shrinking, while the number of older people is expanding; this pattern will continue in the next couple of decades, as the post-war baby-boom generation completes its move into retirement.

Such developments are likely to have profound implications, not only for individuals, but also for governments, business and civil society, impacting, among others: health and social care systems, labour markets, public finances and pension entitlements (each of which is covered by subsequent chapters in this publication). However, the focus of this opening chapter is a set of demographic indicators that describe the latest developments for an ageing Europe.

Population ageing will rapidly transform the structure of society

Population ageing is a long-term development that has been apparent for several decades in Europe. This process is being driven by historically low fertility rates, increasing life expectancy and, in some cases, migratory patterns (for example, those EU Member States characterised by net inflows of retired persons). Population projections suggest that the ageing of the EU’s population will quicken in the coming decades, with a rapid expansion in the number and share of older people. 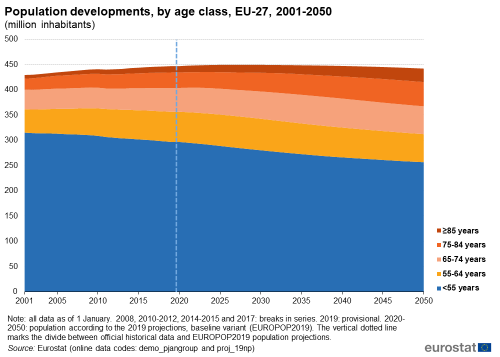 There will be close to half a million centenarians by 2050

Given the shrinking size of the working-age population and the growing number of older and very old people in society, one of the most pressing concerns for policymakers is to encourage older people to remain, for as long as possible, in the labour force. 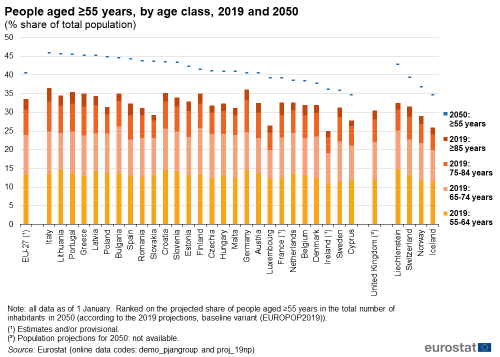 The population is turning increasingly grey

Figure 3 presents two pyramids for the EU-27 that are overlaid, one showing the situation at the start of 2019 (the solid bars) and the other a projection for 2050 (the bars with borders); they highlight the demographic transition that is projected to take place across the EU during the next three decades. The EU-27 population pyramid for 2019 is relatively narrow at the bottom and is more like a rhomboid, with a bulge in the middle of the pyramid indicating that the baby-boom generation are approaching retirement. Falling fertility rates from the 1970s onwards explain why the base of the pyramid for 2019 is relatively narrow; this process is known as ‘ageing at the bottom’ (of the population pyramid).

In the coming decades, a high number of baby-boomers will swell the number of old and very old people as the EU-27 population pyramid takes on an almost pillar-like shape, with each age group having a similar share of the total population. The growing proportion of older people may be explained in part by increased longevity; this process is often referred to as ‘ageing at the top’ (of the population pyramid). One of the most striking aspects of the pyramid for 2050 is the lengthening of the bars for the upper age group (compared with those for 2019), indicating that a greater share of the population will live to be very old (85 years or more); this is particularly notable among women.

Older people — differences between the sexes

Figure 5 shows that the gender imbalance for older people was most apparent among very old people (aged 85 years or more). In 2019, there were more than twice as many very old women in the EU-27 as very old men, a ratio of 2.09 : 1. The largest gaps between the sexes for this age group were also recorded in the Baltic Member States, as very old women outnumbered very old men by more than three to one. At the other end of the range, the gender imbalance for very old people was relatively narrow in Cyprus and particularly Greece (where there were 1.46 very old women for every man of the same age). 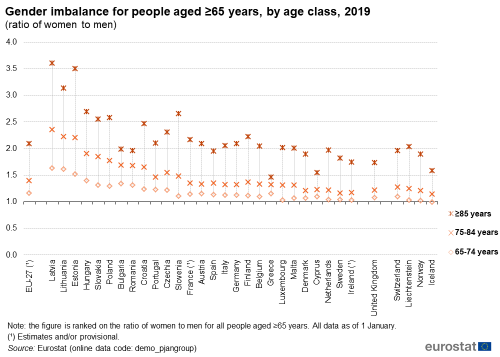 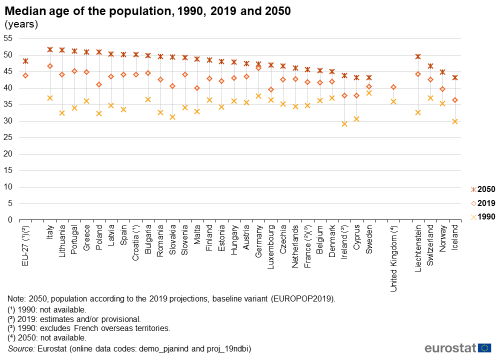 In the timespan of 50 years, the old-age dependency ratio is projected to more than double 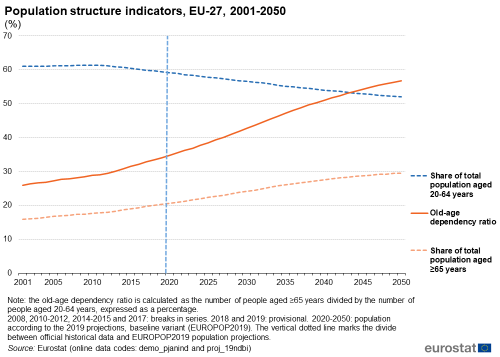 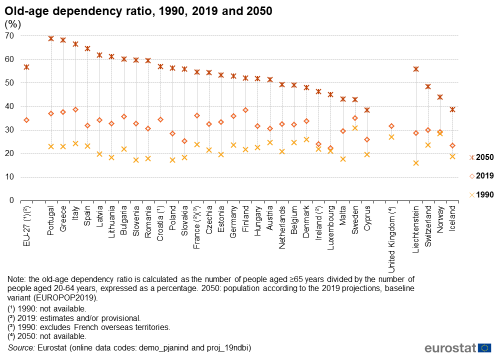 A rapid expansion in the number of very old people

The growing number of very old people (aged 85 years or more) in the EU-27 has a range of consequences. One of the principal areas of concern for policymakers is the cost of providing adequate health and long-term care, as very old people tend to consume proportionally more social services (their needs are usually greater than those of other age groups).

In 2019, the share of the very old people in the EU-27 population was 2.8 %. There were five EU Member States where this share was less than 2.0 %, with Ireland, Cyprus and Slovakia registering the lowest shares (1.5-1.6 %). By contrast, France and four southern Member States — Portugal, Spain, Greece and Italy — had the highest shares of very old people, with a peak of 3.6 % recorded in Italy.

While population ageing is a global phenomenon, the ageing process is more advanced in some regions of the world than in others. The pace of population ageing in many developing countries is substantially faster than the historical precedents observed in developed economies. As such, the former are likely to face far greater pressures when adapting to the needs of their ageing populations.

Behind Japan, the EU provides one of the most distinctive examples of demographic ageing

The G20 countries are at various stages of economic and population development. While the process of population ageing is particularly established in Japan, this may be contrasted with South Africa or Saudi Arabia where young people dominate the population profile. 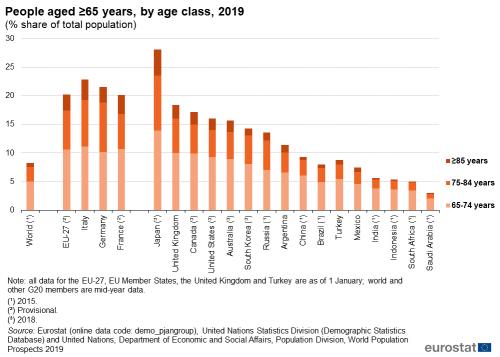 In 2020, the median age of the world population is projected to be 30.9 years. Japan (48.4 years) had the highest projected median age among the G20 nations and was followed by the EU-27 (43.9 years). There were only four G20 countries where the median age was below the world average: Indonesia, Mexico, India and South Africa. 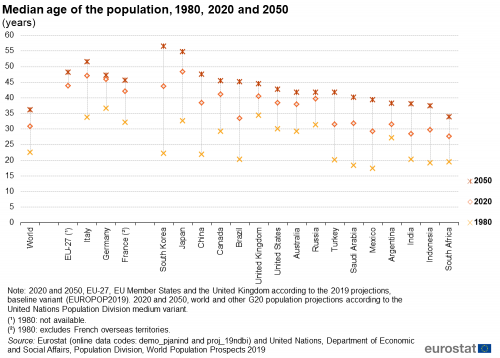 The information presented in Figure 12 confirms the process of rapid population ageing in eastern Asia. The old-age dependency ratio for Japan is projected to continue to rise at a rapid pace through to 2050, when it is projected to reach 80.7 %. This implies that, having had almost four working-age people (defined here as those aged 20-64 years) for each older person (aged 65 years or more) in 2000, Japan will move to a situation of having approximately 1.2 working-age persons for every older person by 2050. During the next three decades there will also be a considerable shift in the structure of the Chinese population. From having an old-age dependency ratio that was close to but just below the world average in 2015, China is projected to see its ratio rise rapidly such that it will be 1.7 times the level projected for the world by 2050. 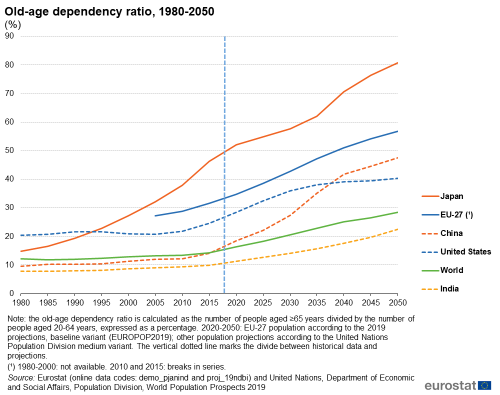 Older people — where do they live?

Older people were more likely to live in rural areas

Rural areas can be places of great natural beauty, which offer a wide range of recreational activities. While such locations might appeal to other older people when they come to consider where to retire, these areas often suffer from a low provision of services. This may be particularly problematic for older people who face a greater risk of reduced mobility, illness or social exclusion. By contrast, urban environments may be advantageous for older people, notably in terms of providing better access to public transport, as well as a greater variety of housing options, public and commercial services. 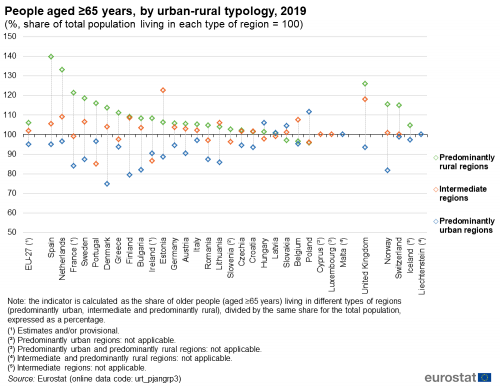 Subnational breakdowns of demographic statistics can be useful to policymakers, particularly when making preparations for age-related services. Map 1 provides information by NUTS level 2 regions and is based on the shares of older people (aged 65 years or more) in the total population. In 2019, there were 17 regions across the EU where older people made up more than one quarter of the total population. These regions were principally located in eastern Germany, northern/central Italy and north-western/central Spain (with only 5 of the 17 regions from other EU Member States): the highest shares were recorded in Chemnitz (eastern Germany; 28.9 %), Liguria (north-western Italy; 28.5 %) and Ipeiros (north-western Greece; 27.0 %). 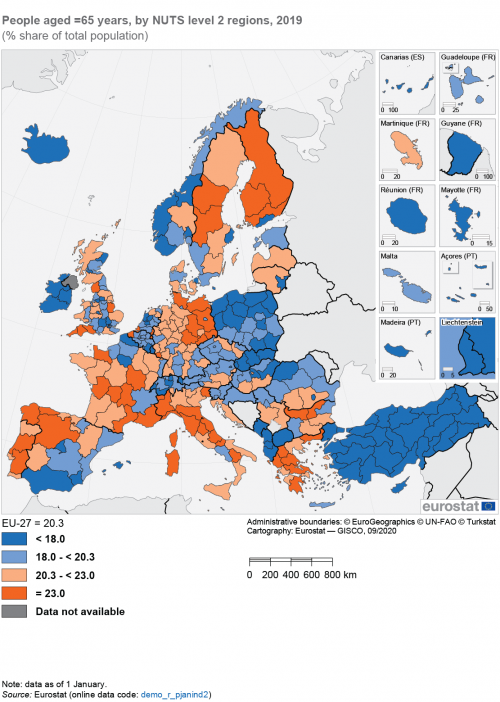 There were high concentrations of older people in rural, sparsely populated regions

Figure 14 provides more detailed figures, namely for NUTS level 3 regions. It underlines the considerable regional variations that exist in some of the EU Member States regarding the share of older people (aged 65 years or more) in the total population. Normally these differences reflect the contrasting situations that prevail between sparsely populated rural regions and urban centres; note that it was common to find the lowest shares of older people in capital city regions.

In 2019, older people accounted for more than one third (36.7 %) of the total population in the central Greek region of Evrytania — a relatively mountainous, rural region, which is sparsely populated. The next highest shares were recorded in the Belgian region of Arr. Veurne (32.5 %) that is located close to the English Channel and shares a border with France, and the eastern German city of Suhl, Kreisfreie Stadt (32.2 %).

Aside from Evrytania, there were several other relatively sparsely populated, remote regions where older people accounted for at least 30.0 % of the total population: Ourense (north-western Spain; 31.4 %), Creuse (central France; 30.3 %), Alto Tâmega (northern Portugal; 30.3 %) or Etelä-Savo (south-eastern Finland; 30.1 %). By contrast, the lowest shares of older people were recorded in two of the outermost regions of France (Mayotte (2.7 %) and Guyane (5.8 %)). 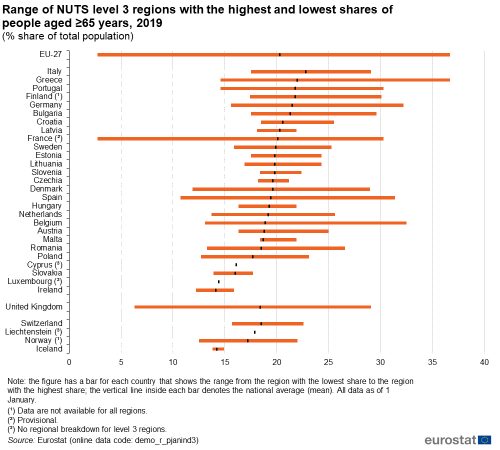 Older people — where do they come from?

While declining fertility and increasing longevity are the key drivers of population ageing in the EU, international migration can also play a role in determining the age profile of a population. Indeed, migration usually slows down the ageing process, as a majority of immigrants tend to be relatively young, fleeing persecution or conflict, searching for work opportunities and the chance of a better quality of life.

A relatively small proportion of older people are foreign citizens

For example, in Luxembourg foreign citizens made up almost half (47.5 %) of the total population in 2019, while their share among older people was considerably lower (at 34.7 %). There were two exceptions to this pattern, Latvia and Estonia, where a higher share of older people (than the total population) were foreign citizens. This may be linked to a high number of older people in these two Member States being classified as recognised non-citizens; these people are mainly former Soviet Union citizens, who are permanently resident but have not acquired any other citizenship. 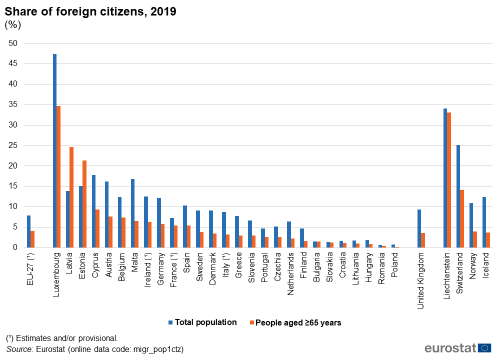