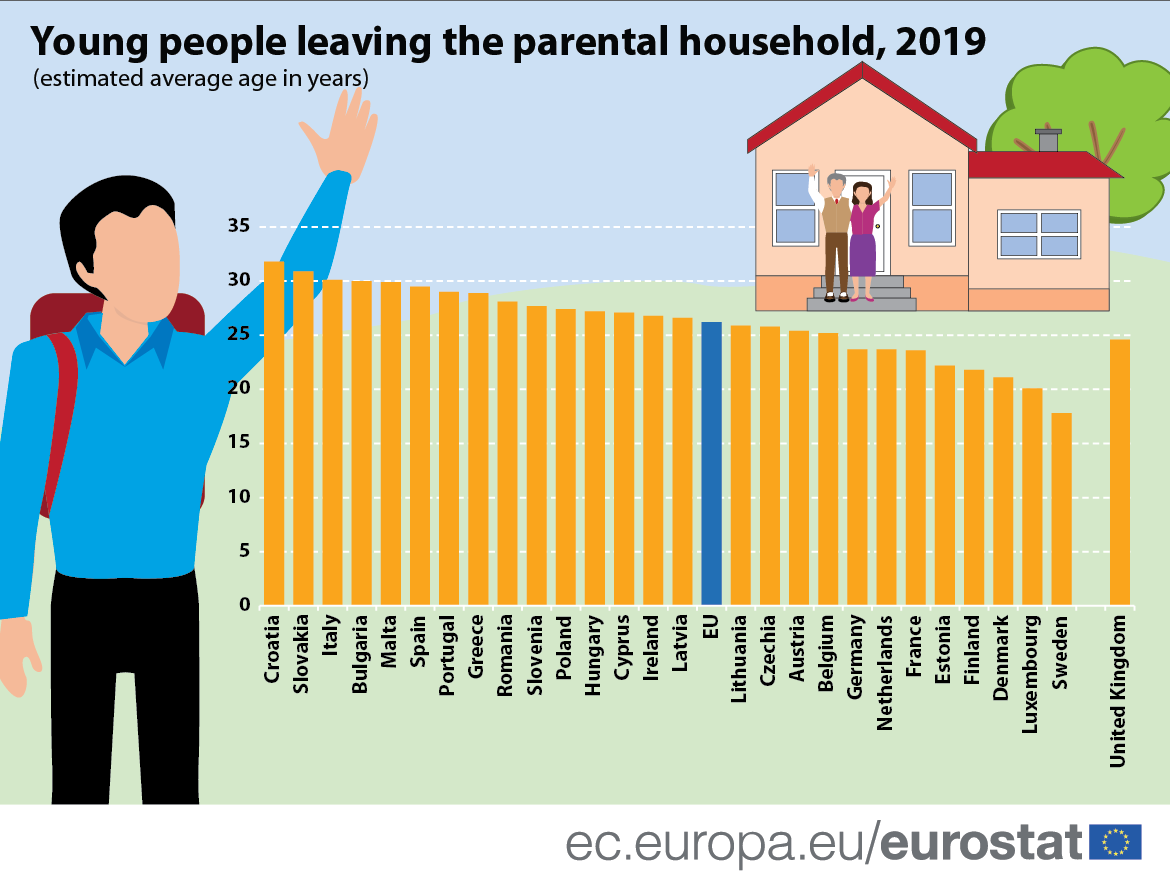 Leaving the parental home is considered as a milestone in the transition from childhood to adulthood. The reasons behind this step may vary: from being materially independent to studying, working, moving in with a partner, getting married and having children, etc. However, the path to independence may not be straightforward and may happen, as will be shown in this article, at different ages across countries. This difference may reflect the dissimilar challenges that young people face across Europe, as well as the variety of cultural particularities in the different countries.

This article presents data on the average age of leaving the parental home in the European Union (EU) and in the EU Member States, as well as the United Kingdom and the candidate countries Montenegro, North Macedonia, Serbia and Turkey. Special attention is given to geographical and gender differences, as well as on the developments since 2006.

Map 1 indicates that in 2019, on average across the whole EU-27, young people left the parental home at the age of 26.2 years. This average, however, varies among the EU Member States. Croatia, Slovakia, Italy and Bulgaria recorded the oldest average ages of leaving the parental home, with all four in the category 30 years and over. By contrast, Sweden, Luxembourg, Denmark and Finland showed the youngest average ages at less than 22 years. The lowest average age of young people leaving their parental household was observed in Sweden (17.8 years) and the highest in Croatia (31.8 years). When including the non-EU countries, the highest age could be seen in Montenegro, where the estimated age of young people leaving their parental household was 33.1 years on average. 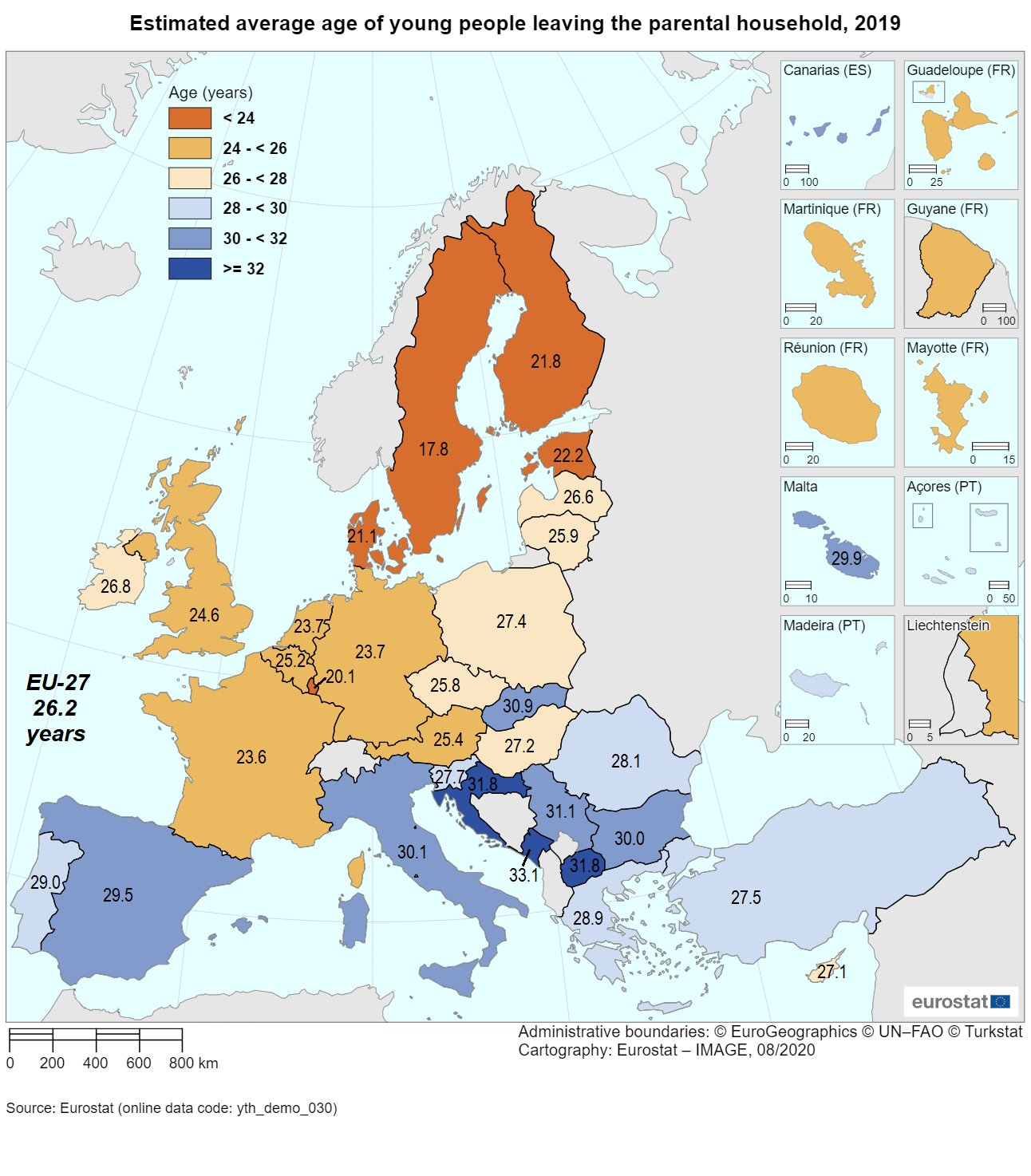 Map 1 suggests that in most northern and western countries, young people left home on average in their early twenties, while in southern and eastern states the average age when leaving home was in the late twenties or early thirties. It is worth noting that Luxembourg and Slovakia differ significantly from their neighbouring countries in this aspect.

Countries can be clustered in six groups of reached ages, based on the 2019 data. In the first group, consisting of Denmark, Estonia, Finland, Luxembourg and Sweden, young people left their parental household on average below the age of 24 years in 2019. The second group, which includes Austria, Belgium, Germany, France, the Netherlands, as well as the United Kingdom, corresponds to an average age of leaving the parental home at the age of 24 or 25 years. Cyprus, Czechia, Hungary, Ireland, Latvia, Lithuania and Poland formed the third and the largest group (in terms of number of countries) with young people leaving their parental household on average at the age of 26 or 27. Countries with an average age when leaving the parental household at 28 or 29 years make up the fourth group; these are Greece, Portugal, Romania, Slovenia and Turkey. In the fifth group, including Bulgaria, Italy, Malta, Slovakia, Spain and Serbia, young people left their parents’ household on average at the age of 30 or 31. Finally, the sixth and smallest group is made up of Croatia, Montenegro and North Macedonia and corresponds to an average age of 32 years or above for people leaving their parental home.

On average, young women moved out of the parental home earlier than young men in almost all considered countries (Figure 1). This may be a sign that women are more prone to joining their partner’s household or forming a multi-generational household with their husband’s parents. The only exception in 2019 was Luxembourg where women left their parental household 0.3 years later than men.

The gender gap between the average ages of leaving the parental home was 1.9 years at EU level in 2019. It was the largest in Romania (4.6 years), Bulgaria (4.5 years), Croatia (3.7 years) and Latvia (3.3 years). However, considering also the candidate countries, the gap was larger in North Macedonia (7.6 years) and Serbia (5.3 years). By contrast, the gap was smallest in Sweden (0.4 year), Denmark (0.5 year) and Estonia (0.6 year) as well as in Luxembourg (0.3 year), the only country where women left home later than men. 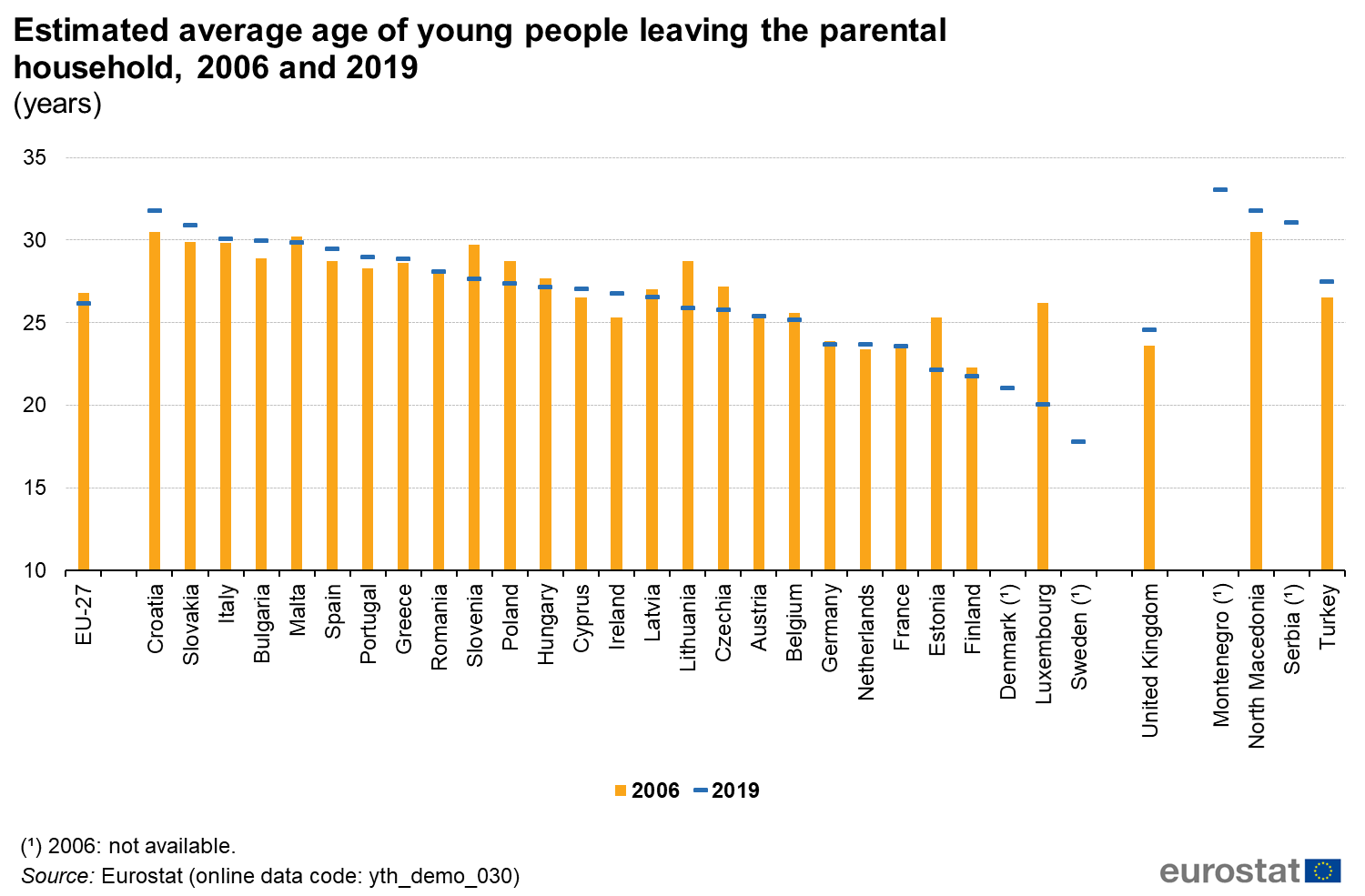 Coverage: The results from the EU-LFS currently cover all European Union Member States, the United Kingdom, the EFTA Member States of Iceland, Norway, Switzerland, as well as the candidate countries Montenegro, North Macedonia, Serbia and Turkey. For Cyprus, the survey covers only the areas of Cyprus controlled by the Government of the Republic of Cyprus. However, EU-LFS household data are not available for Iceland, Norway, Switzerland. This is the reason why statistics are not available in this article for these three countries.

Detailed technical and methodological information on the EU-LFS can be found in five articles linked to the overview page EU labour force survey.