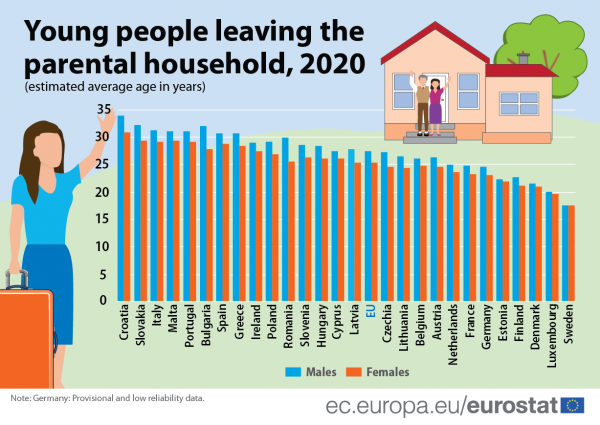 Leaving the parental home is considered a milestone in the transition from childhood to adulthood. The reasons behind this step may vary from being materially independent to studying, working, moving in with a partner, getting married and having children, etc. However, the path to independence may not be straightforward and may occur at different ages across countries, as demonstrated in this article. This disparity may reflect the differences in the challenges that young people face across Europe, as well as the diversity of cultural differences between countries.

This article presents data on the average age of leaving the parental home in the European Union (EU) and in the EU Member States, as well as the candidate countries Montenegro, North Macedonia, Serbia and Turkey. Special attention is given to geographical and gender differences, as well as on the developments over time.

As shown in Map 1, in 2020, the average age of young people leaving their parental home in the EU was 26.4 years. This average, however, varies a lot among the EU Member States. Croatia, Slovakia, Italy, Malta and Portugal recorded the oldest average ages of leaving the parental home, with all five in the category 30 years and over. By contrast, Germany, Estonia, Finland, Denmark, Luxembourg and Sweden showed the youngest average ages at less than 24 years. The lowest average age of young people leaving their parental household was observed in Sweden (17.5 years) and Luxembourg (19.8 years), while the highest was found in Croatia (32.4 years). Furthermore, including the non-EU countries, it appears that young people in the Western Balkans leave their parental home later than in the other countries, particularly in Montenegro, where this occurs at the age of 33.3 years; North Macedonia and Serbia follow with ages of 32.1 and 31.2 years, respectively. Moreover, looking at Map 1 from a broader perspective, it is clear that in most northern and western countries, young people left their parental home on average in their early to mid-twenties, whereas in most southern and eastern states in their late twenties or even early thirties. 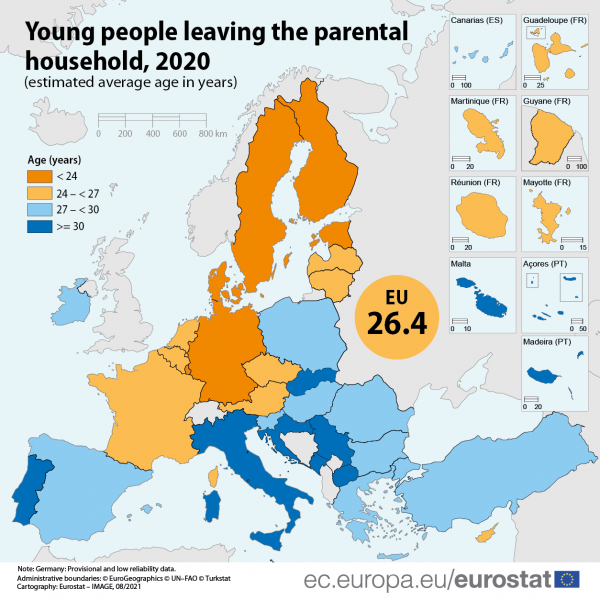 In almost all of the countries studied, as well as at EU level, young women left the parental home earlier than young men (see Figure 1). The only exception to this pattern in 2020 was Sweden, where men did so at a slightly younger age than women (0.1 years difference). Furthermore, in eight EU countries (Croatia, Slovakia, Bulgaria, Italy, Malta, Portugal, Spain and Greece), men left their parental home on average after the age of 30. By contrast, women moved out of their parent's home after this age in only one country, namely in Croatia.

Figure 2 presents the long-term evolution of the average age of young people moving out from the parental household at EU level. Focusing on men, the age of moving out reached 28.0 years in 2006, this was its highest point since the beginning of the time series in 2002. Hereafter, this age started to decline (by 0.1 years per year on average) reaching its lowest point in 2019 of 27.1 years. Then in 2020, the age of men leaving the parental home moved up by 0.3 years, which was the most sizeable increase since 2005. The long-term evolution of the age of women leaving the parental household does not reveal as much fluctuation over the years; it only ranged between 25.1 and 25.5 years; nonetheless, this age increased by 0.2 years between 2019 and 2020, which was also its largest rise since 2005. This latest development might reflect the situation revolving around the COVID-19 pandemic, which might have led young people to reconsider moving out and remaining a bit longer at their parent’s home.

In 12 EU countries, as shown in Figure 3, the average age at which the young population leave their parental household decreased over the course of the ten-year period between 2010 and 2020, with the largest decreases recorded in Luxembourg (-6.4 years), Sweden (-2.8 years) and Estonia (-2.3 years). Slovenia also knew a relatively sizeable decrease, of 2.0 years. This average age also increased in 12 EU countries, but the increases were less significant than the decreases. Ireland (+3.0 years), Spain and Croatia (+1.4 years for both) experienced the highest increases between 2010 and 2020. In addition, Greece and Portugal also recorded increases of more than 1.0 years over this period. Finally, in Bulgaria, Austria and Denmark, the age of young people leaving the parental home remained unchanged at 29.9, 25.5 and 21.2 years, respectively (although it varied to some extent over 2010-2020). 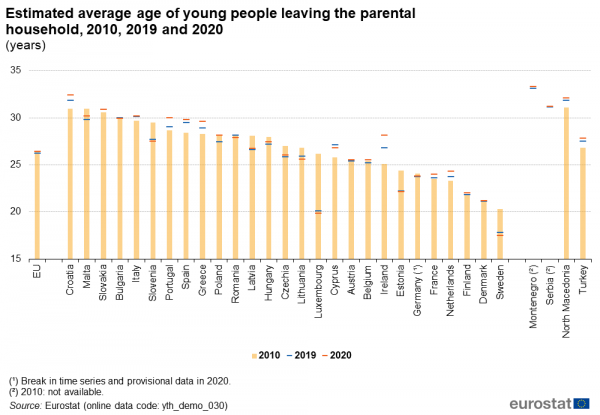 Young people in the majority of the EU Member States (18 countries exactly) had an increase in the age of leaving the parental home in the one-year period between 2019 and 2020. The most substantial increases, of more than 0.5 years, were found in Ireland (+1.3 years), Portugal (+1.0 years), Greece and Poland (+0.7 years for both), and the Netherlands and Croatia (+0.6 years for both). In Slovakia, the age of moving out remained stable between 2019 and 2020, while in eight EU countries this age declined. The largest declines were found in Lithuania, Cyprus, Sweden and Luxembourg (-0.3 years for each).

The interplay with NEET

Another relevant finding is that countries, where young people leave the parental household at an older age, are more likely to have a higher share of young people neither in employment nor in education and training (NEET). The association between those two indicators is shown in Figure 4. For example, young people in Luxembourg and Sweden left the parental home at a younger age on average than their peers in the other countries. At the same time, Luxembourg (7.7 %) and Sweden (7.2 %) recorded some of the lowest NEET rates. On the other hand, the NEET rates in Montenegro (26.6 %) and North Macedonia (26.2 %) were among the highest, and at the same time, young people in those two countries had the highest age of leaving the parental home. 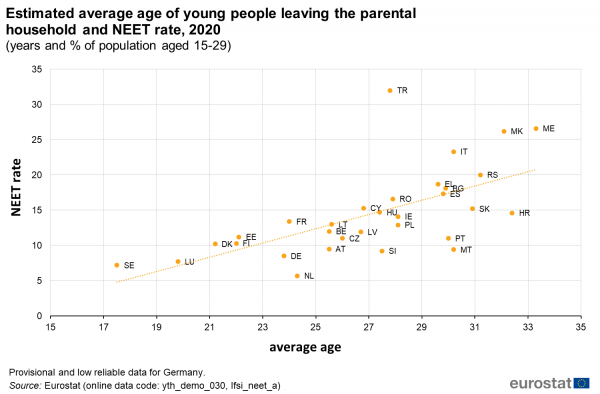 Country note: In Germany, since the first quarter of 2020, the Labour Force Survey (LFS) has been integrated into the newly designed German microcensus as a subsample. Unfortunately, for the LFS, technical issues and the COVID-19 crisis has had a large impact on the data collection processes, resulting in low response rates and a biased sample. Changes in the survey methodology also led to a break in the data series. The published German data are preliminary and may be revised in the future. For more information, see here.