The strategic framework for European cooperation in education and training adopted in May 2009 sets a number of benchmarks to be achieved by 2020, including one for adult participation in learning, namely that an average of at least 15 % of adults aged 25 to 64 years old should participate in lifelong learning. In 2019, the proportion of persons aged 25 to 64 in the EU who participated in education or training was 10.8 %; a share that was 0.7 percentage points higher than the corresponding share for 2014. The adult learning indicator refers to participation in formal and non-formal education and training and the reference period for the participation is the four weeks preceding the interview as is usual in the labour force survey. (see Table 1).

Denmark, Finland and Sweden stood out from the other EU Member States as they reported considerably higher proportions of their respective adult populations participating in lifelong learning in the four weeks preceding the interview, ranging from 25.3 % to 34.3 %. Estonia, the Netherlands, France and Luxembourg were the only other Member States where the participation rate in 2019 already exceeded the 15 % benchmark. By contrast, Romania, Bulgaria, Croatia, Slovakia and Greece reported adult learning rates of 4.0 % or less.

The proportion of the population who had participated in adult learning was higher among women (11.9 % in 2019) in the EU than among men (9.8 %); the shares for men and women were both higher in 2019 than they had been five years earlier.

In 2019, women recorded higher participation rates than men in all EU Member States except for Romania, Germany and Luxembourg (where rates for men were higher), while Czechia and Slovakia reported the same rate for both sexes. The largest gender difference, in percentage points, was in Sweden, where the participation rate for women was 16.8 percentage points higher than for men. 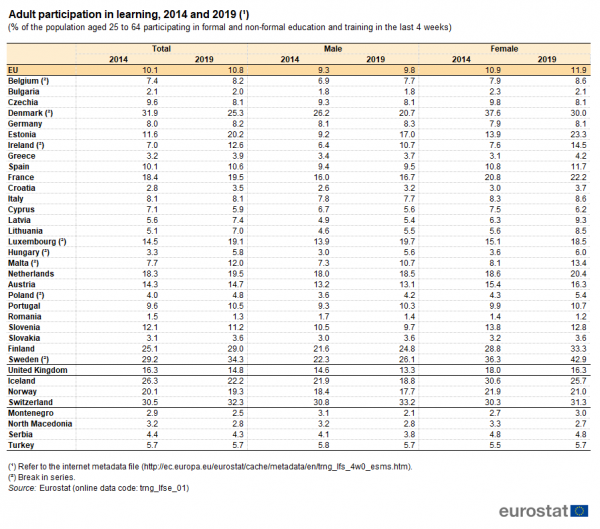 The likelihood of participation in education and training was related to the level of educational achievement: persons with a tertiary level education reported the highest participation rates (65.4 % for the EU in 2016), while those having completed at most lower secondary education were the least likely to have participated (23.6 %). 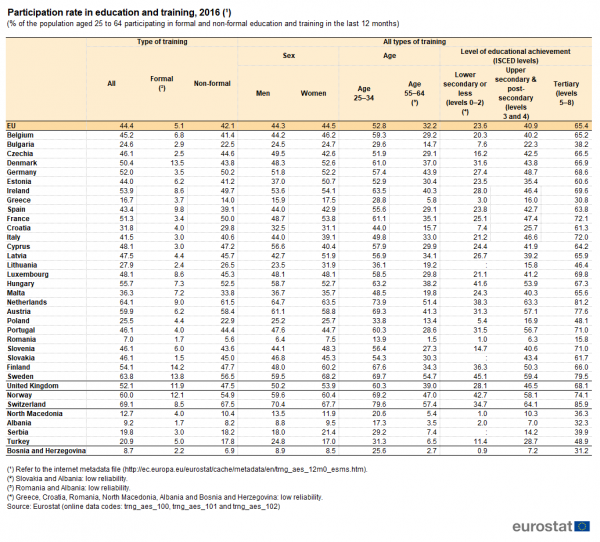 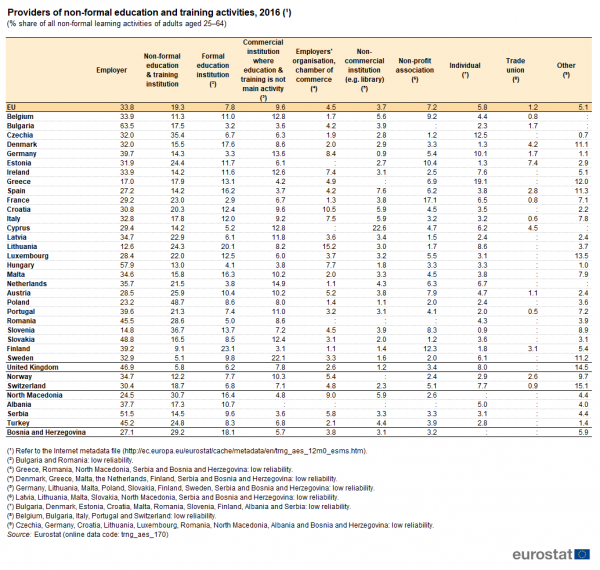 Additional and more detailed information on adult learning is available from the adult education survey (AES). The AES covers adults’ participation in education and training (formal, non-formal and informal learning) and refers to any education and training in which respondents may have participated during the 12-month period preceding the interview. The AES is implemented in EU Member States, EFTA countries and candidate countries. Three waves of the AES have been implemented so far, in 2007, 2011 and 2016. The first was a pilot exercise and was carried out on a voluntary basis, while the 2011 and 2016 AES were underpinned by legal acts (Commission Regulation (EU) No 823/2010 and Commission Regulation (EU) No 1175/2014). Following a change in legislation, the next wave is due in 2022.

The integrated economic and employment guidelines were revised as part of the Europe 2020 strategy for smart, sustainable and inclusive growth. Guideline 8 concerns developing a skilled workforce responding to labour market needs, and promoting job quality and lifelong learning.

The Copenhagen process, established in 2002, lays out the basis for cooperation in vocational education and training (VET) between 33 European countries. The overall aim is to encourage more individuals to make wider use of vocational learning opportunities, whether at school, in higher education, in the workplace, or through private courses. The actions and tools developed as part of the process aim to allow users to link and build on learning acquired at various times, in both formal and non-formal contexts.

In June 2010, the European Commission presented a 10-year vision for the future of vocational education and training in a Communication titled ‘A new impetus for European cooperation in vocational education and training to support the Europe 2020 strategy’ (COM(2010) 296 final). In December 2010, in Bruges (Belgium) the priorities for the Copenhagen process for 2011 to 2020 were set, establishing a vision for vocational education and training to be reached by the year 2020: attractive and inclusive VET; high quality initial VET; easily accessible and career-oriented continuing VET; flexible systems of VET based on a learning outcomes approach which cater for the validation of non-formal and informal learning; a European education and training area; substantially increased opportunities for transnational mobility; easily accessible and high-quality lifelong information, guidance and counselling services. Based on this vision a total of 11 strategic objectives were set for the period between 2011 and 2020 as well as 22 short-term deliverables for the first four years.

The economic crisis, the need for new skills and the demographic changes facing Europe have highlighted the role that adult learning may play in lifelong learning strategies, contributing towards policies that seek to boost competitiveness, employability, social inclusion and active citizenship: a framework for education and training (ET 2020).

The launch of the EQF aims to help employers and individuals compare qualifications across the EU’s diverse education and training systems: it encourages countries to relate their national qualifications systems to the EQF so that all new qualifications issued from 2012 carry a reference to an appropriate EQF level. The EQF also represents a shift in European education as it is based on an approach which takes into account learning outcomes rather than the resources which are put into learning. In other words, it is a framework based on what learners are actually able to do at the end of a course of education, rather than where the learning took place and how long it took.

The EU’s programme for education, training, youth and sport, referred to as ‘Erasmus+’, was adopted in December 2013. This programme covers the period 2014–20 and has an overall budget of EUR 14.7 billion. Erasmus+ replaces (and integrates) several programmes, including the Leonardo da Vinci programme which provided support in the fields of vocational education and training, and the Grundtvig programme which provided adults with ways of improving their knowledge and skills. Erasmus+ activities in the field of vocational education and training provide opportunities for vocational students, trainees and apprentices to undertake placements abroad, as well as providing opportunities for staff to undertake professional development activities. In this field Erasmus+ also provides opportunities for cooperation between institutions and with business, for example to design and deliver curricula to meet the needs of the labour market. Erasmus+ activities in the area of adult learning offer opportunities for the exchange of staff, cooperation between institutions and organisations and with business, and support the platform for adult learning in Europe.