Social media - statistics on the use by enterprises

Tweet
In 2019, 53 % of EU enterprises used at least one type of social media, with more than eight out of ten of these businesses (86 %) using social media to build their image and to market products.
Tweet 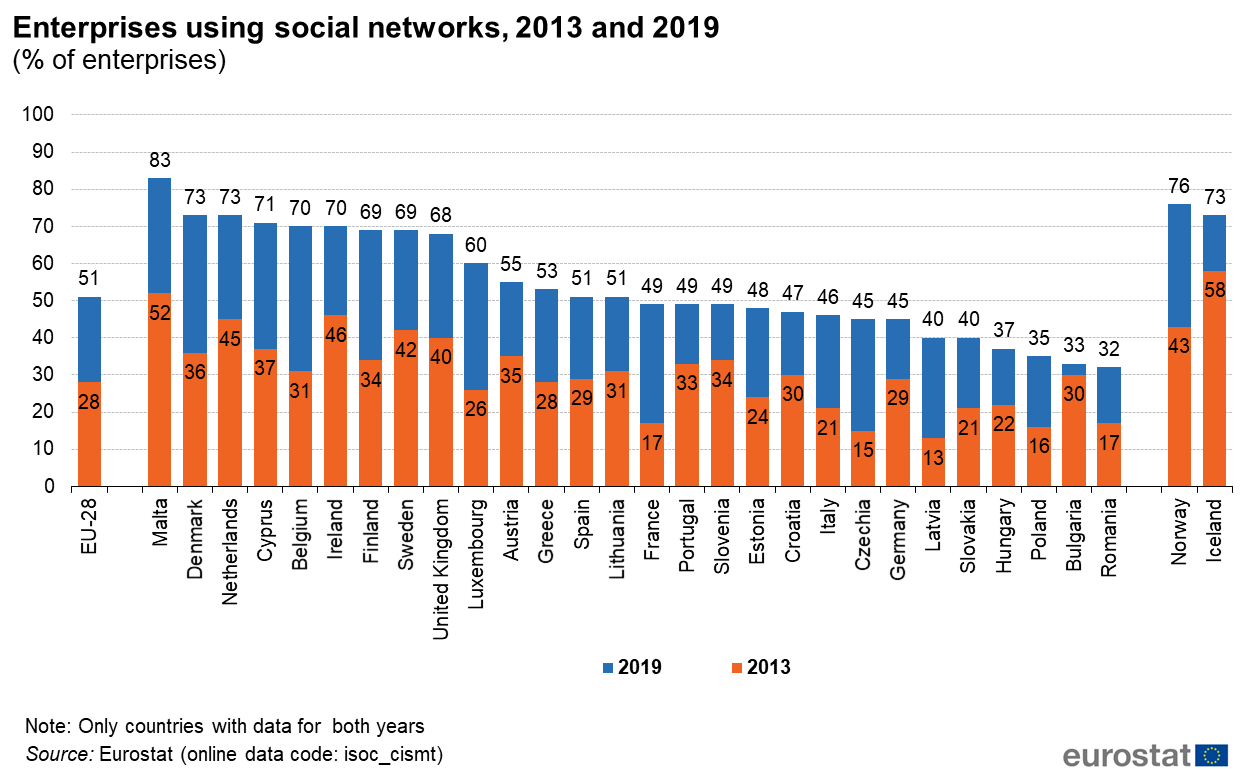 This article presents recent statistics on the use of social media by enterprises in the European Union (EU).

Social media are part of the digital technologies that enterprises exploit to increase their presence on the internet, improve marketing opportunities, communicate and interact with partners, customers and other organisations, and facilitate collaboration and knowledge-sharing within the enterprise.

Social media refer to internet based applications such as, for instance, social networks, blogs, multimedia content-sharing sites and wikis. In principle, enterprises use social media for image building or for marketing purposes, for gaining insights from customers or communicating within or outside the enterprise or for recruiting.

For more than a decade, there has been a shift from the static webpages of the earlier websites towards web applications which draw on user data and relevant applications stored in the ‘cloud’. In that time, a multitude of internet-based services, collaborative web applications and interactive websites have appeared. Users have been encouraged to subscribe to these services, to author, post and share user-generated content and to add links to other websites. In addition, individuals and enterprises have been able to exchange information, experiences and opinions in the form of ‘many-to-many dialogues’ over internet communication platforms. These virtual interaction platforms have, in fact, been part of a paradigm shift in the way enterprises communicate with their customers.

Enterprises have not only progressively embraced this new generation of highly dynamic web applications, but have also adopted new behaviours. They have integrated social media into the way they run their business, organised forms of internal communication apart from the management chain and, most importantly, communicated and interacted with customers using the new applications. From that point of view it has been possible for customers to influence business decisions and assist companies in designing and marketing their products.

Use of social media by enterprises

Enterprises seek to enhance their internet presence by exploiting the possibilities that social media offer. The four most widely known categories of social media are: (a) social networks such as Facebook, LinkedIn, Xing, and others; (b) corporate blogs or microblogs such as Twitter and others; (c) multimedia content-sharing websites such as YouTube, Instagram, Flickr, SlideShare, and others; and (d) wiki-based knowledge-sharing tools. 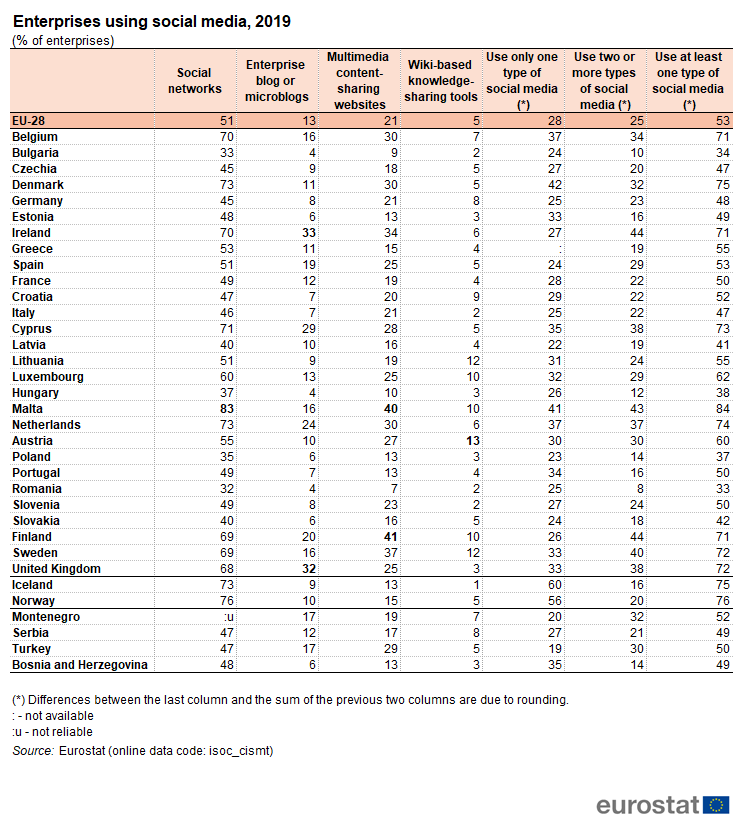 Social networks were more popular than other types of social media. Some 51 % of enterprises in the EU used social networks empowering customers to connect by creating personal information profiles, to share experiences, to express opinions, to exchange information and, most importantly, to create communities of people with common interests around the enterprises’ product brands. The percentage of EU enterprises using social networks ranged from 83 % in Malta to 32 % in Romania (Table 1).

The use of blogs or microblogs and content-sharing websites was less popular among EU enterprises, at 13 % and 21 % respectively. Corporate blogs are websites that are updated frequently, up to several times a day, with posts that contain text, images, audio or videos. Blogs can be used either inside an enterprise or for communicating with outside parties such as customers, business partners or other organisations. Microblogging is posting very short text messages, usually of a few hundred characters or less, and sharing hyperlinks to other websites, which usually contain longer text, videos or images. Multimedia content communities give enterprises the opportunity to share media content with potential or current customers, thus enhancing their marketing capacity. They may release photos and videos or share presentations and documents over the internet that may be linked to blogs and other social networking services or websites. The percentages of EU businesses using blogs or microblogs were highest in Ireland (33 %) and United Kingdom (32 %), multimedia content-sharing websites were highest in Finland (41 %) and Malta (40 %).

The least popular social media in 2019 were wiki-based knowledge-sharing tools used by 5 % of EU enterprises. A wiki is a website that in principle allows multiple users to create and collaboratively edit interlinked webpages using an internet browser. Wiki-based communication platforms may be open to a global audience or may be restricted to a selected network or community of partners. The highest percentage of EU businesses using wiki-based knowledge-sharing tools was registered in Austria (13 %) (Table 1). 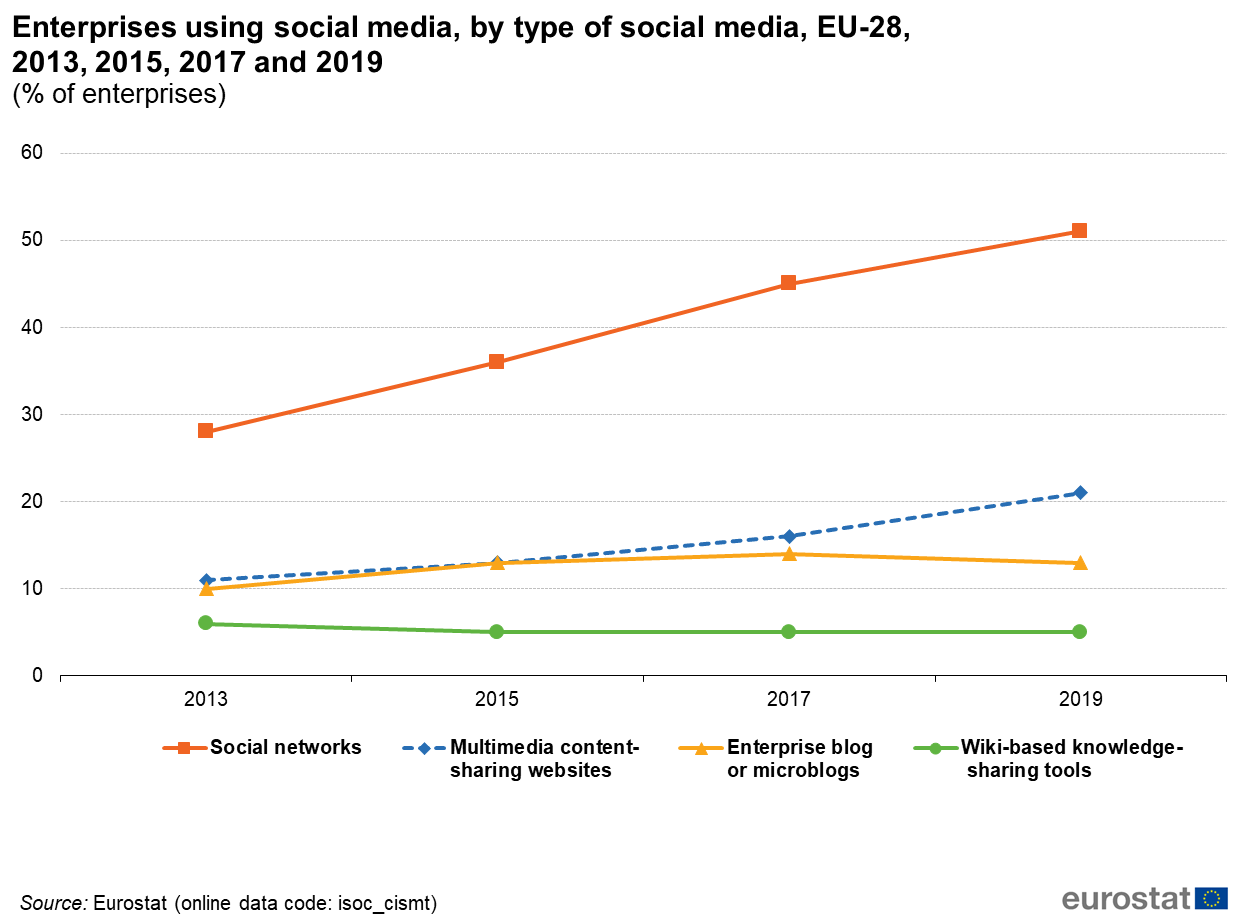 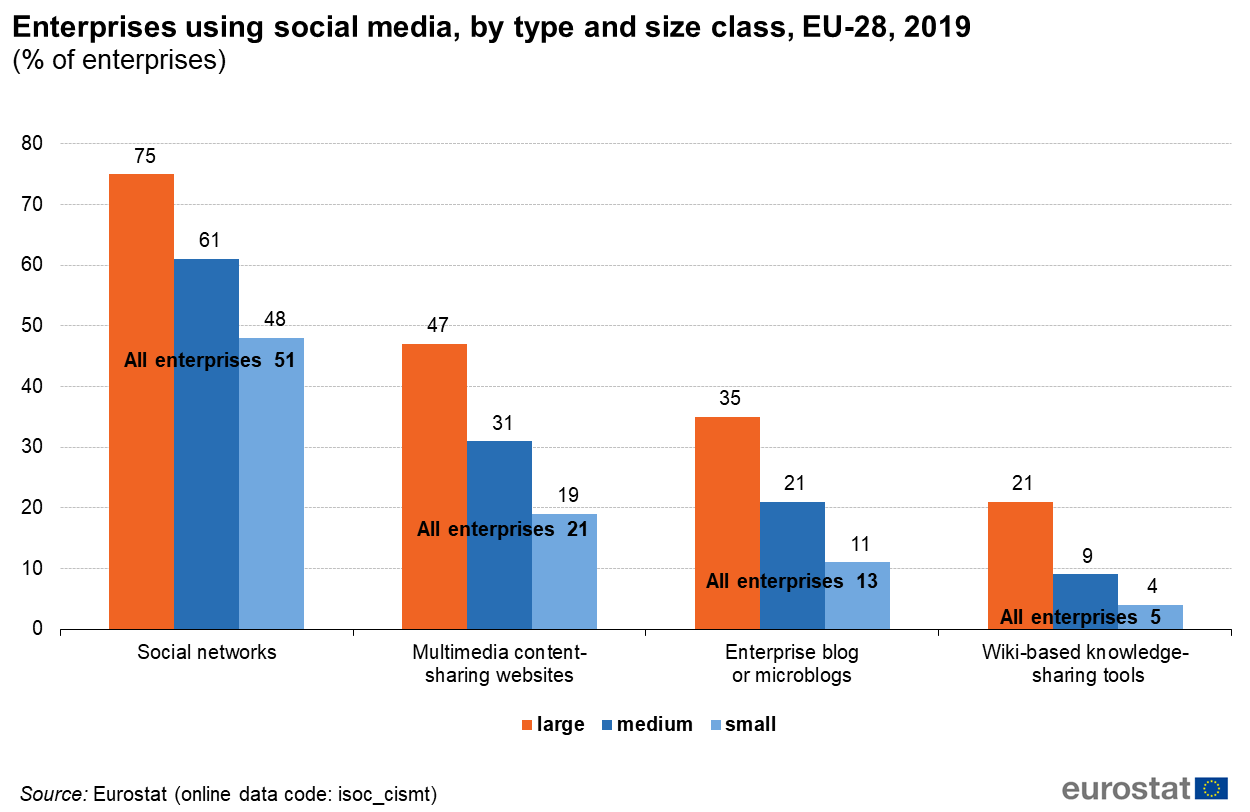 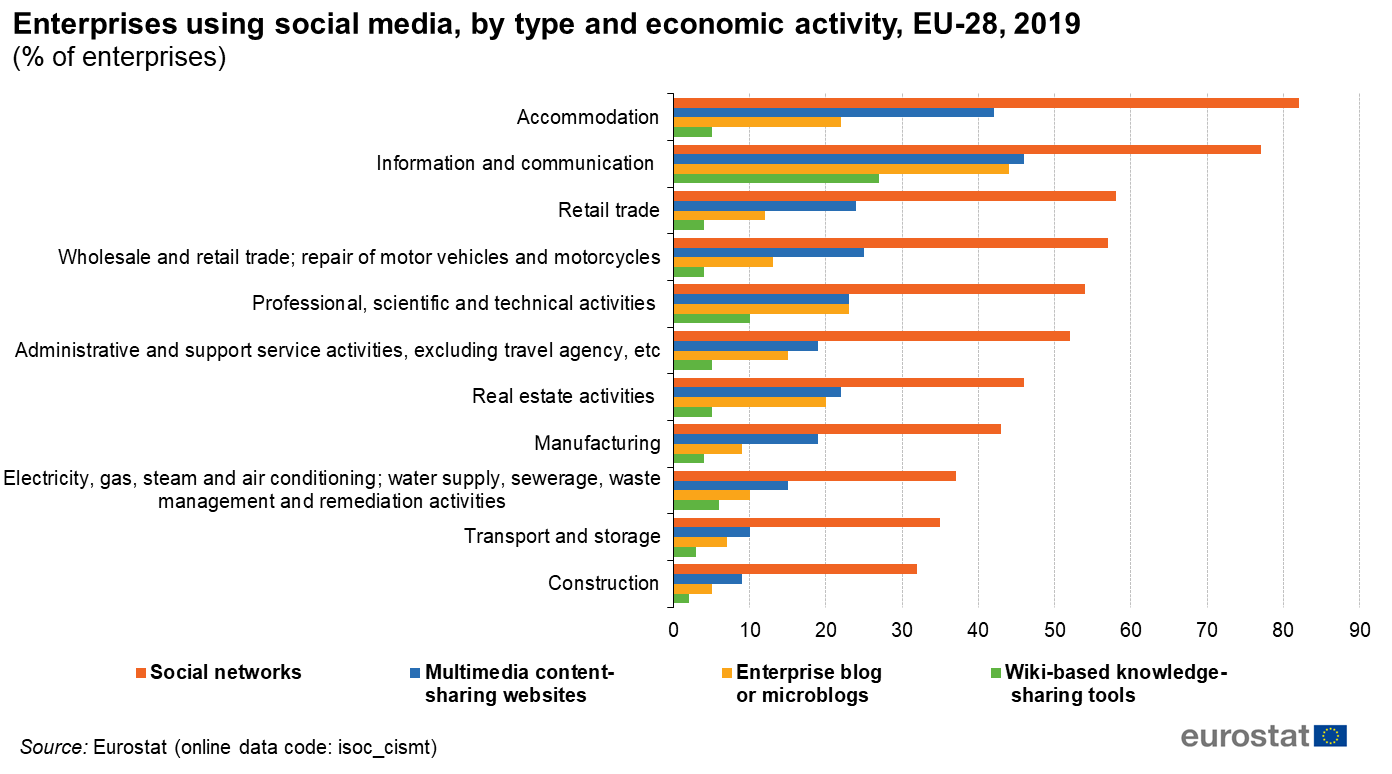 There are different purposes for which the enterprises are using social media. For instance to reach the ‘outside world’ — customers, business partners or other organisations — or for communication inside the enterprise or for specific purposes such as to recruit employees. 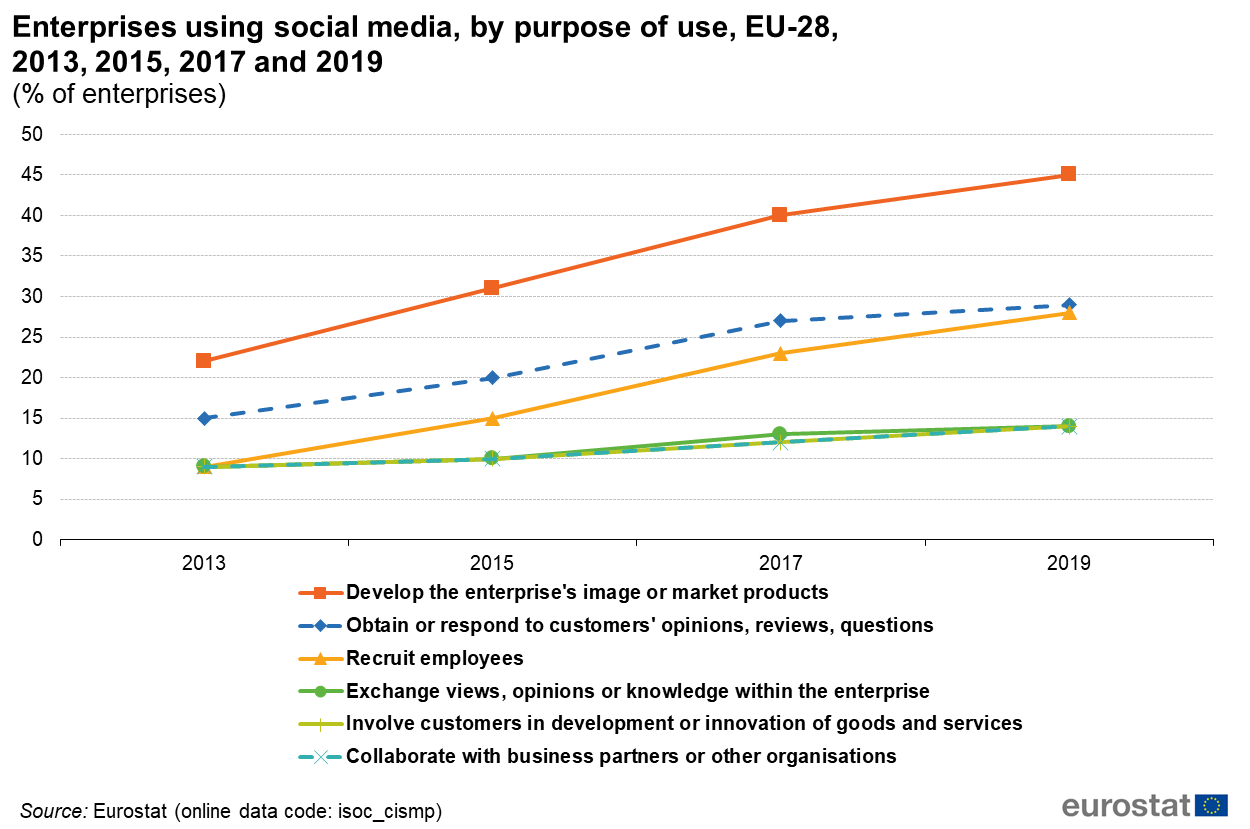 Purposes of using social media by size of enterprises 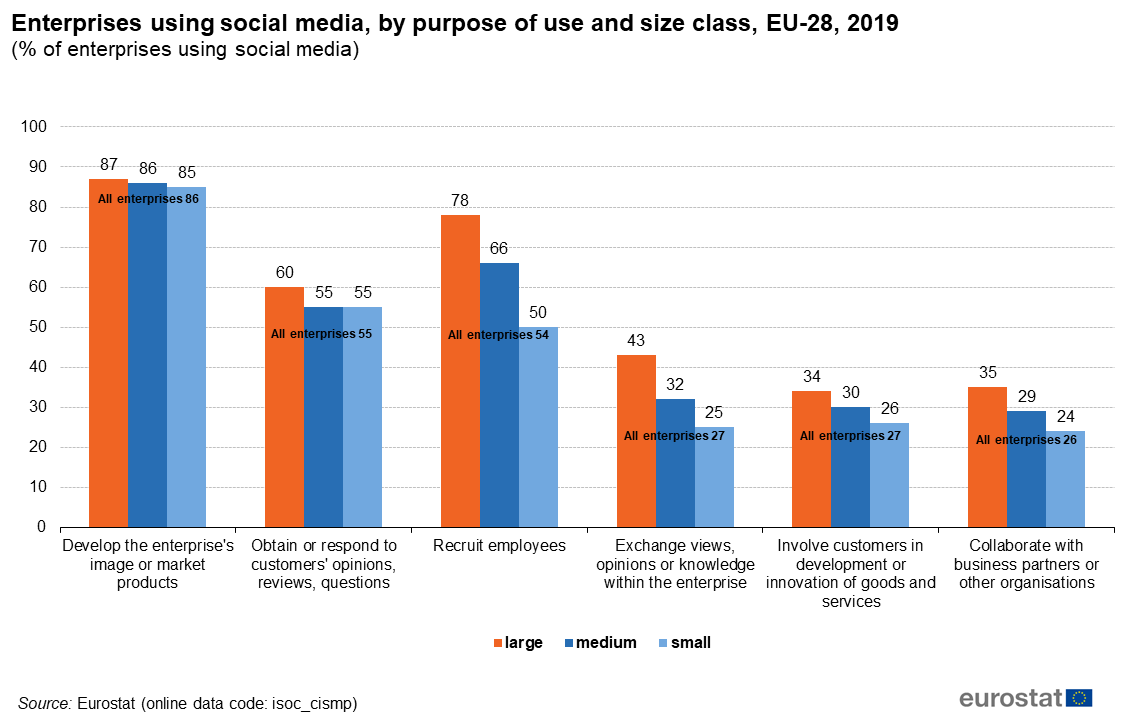 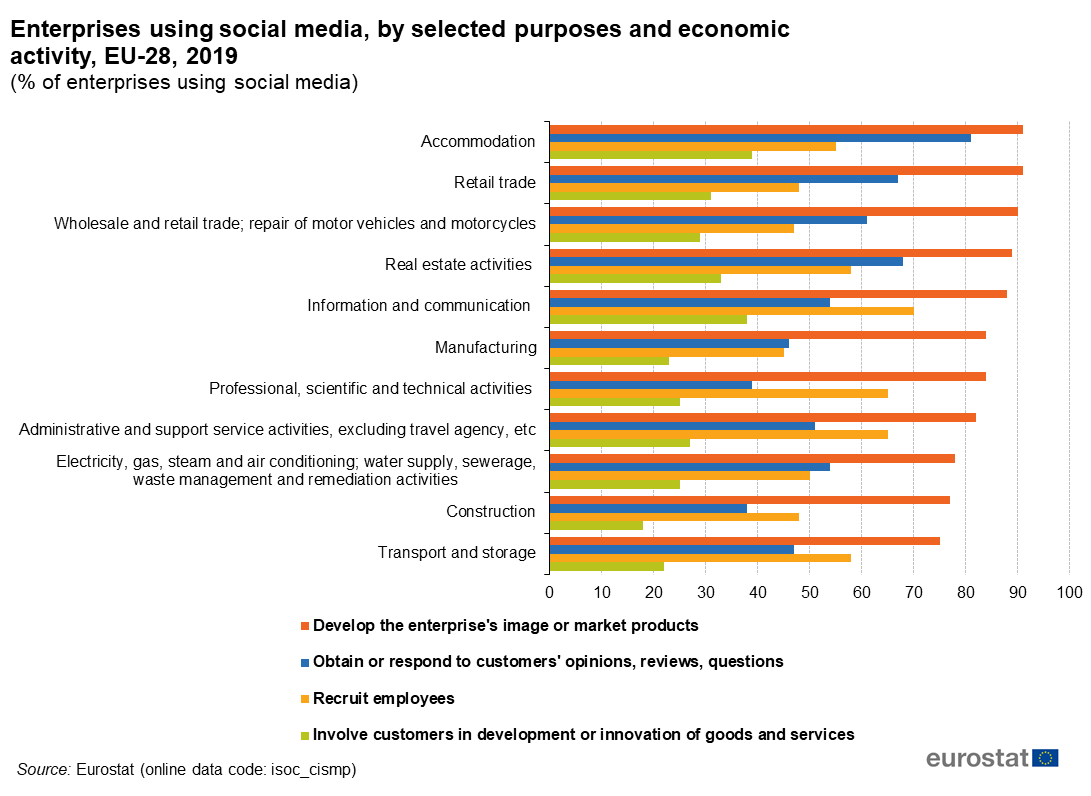 Data presented in this article are based on the results of the 2019 Community survey on ‘ICT usage and e-commerce in enterprises’. Statistics were obtained from enterprise surveys conducted by National Statistical Authorities in 2019. The statistical observation unit is the enterprise, as defined in Regulation 696/1993 of 15 March 1993. The survey covered enterprises with at least 10 persons employed.

Some questions on social media have slightly changed over the years, in particular between 2013 and 2015, see:

In this article, enterprises using social media are defined as those that use the internet and have a user profile, an account or a user licence, depending on the requirements and type of social media concerned. References to third-party brands, products and trademarks are for the sake of clarification and are not intended to promote the use of such products.

The "Digital Single Market" (DSM) for Europe is a prominent priority of the Commission. In particular, DSM strategy is built on three pillars: (1) better access for consumers and businesses to digital goods and services across Europe; (2) creating the right conditions and a level playing field for digital networks and innovative services to flourish; (3) maximising the growth potential of the digital economy. Online platforms - parts of which are the social media - play an increasingly central role in social and economic life and are an important part of a thriving internet-enabled economy.

The wider EU policy interest is in spotting business opportunities for launching services based on key enabling technologies such as social media. Social media are part of the digital technologies that enterprises exploit to increase their presence on the internet, improve marketing opportunities, communicate and interact with partners, customers and other organisations, and facilitate collaboration and knowledge-sharing within the enterprise.

In this context, social media (along with other technologies such as cloud computing, mobile access to the internet, and ‘big data’) enable business to grow and innovate. Growth remains a condition for business survival while innovation remains necessary for competitiveness (European Commission’s main innovation policies).

Websites and use of social media (isoc_cism)