Economic developments in production, income generation and (re)distribution, consumption and investment may be better understood when analysed by institutional sector. In particular, the European Union’s (EU’s) sector accounts provide several key indicators for households and non-financial corporations, like the household saving rate or the business profit share.

The analysis in this article focuses on a selection of indicators from the wealth of sector accounts data that are collected by Eurostat. Households’ behaviour is described through indicators covering gross saving and investment rates, as well as gross debt-to-income and net financial wealth-to-income ratios. The analysis of non-financial corporations is based on the gross business investment rate and their gross profit share. 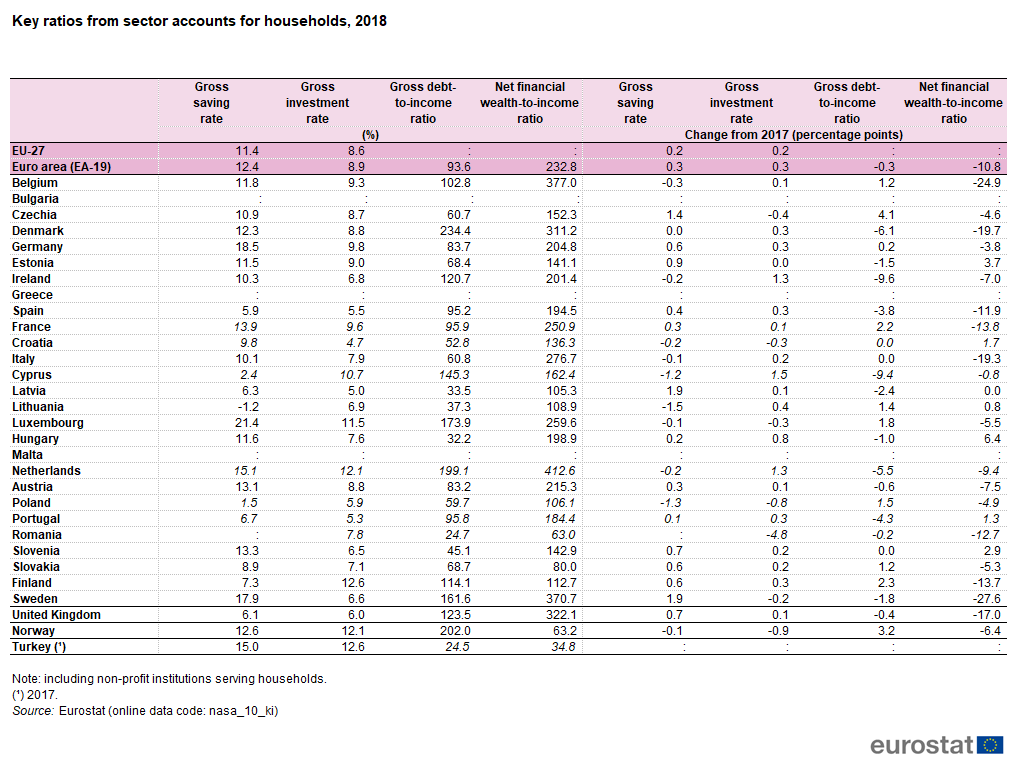 Among the EU Member States within the euro area (no data available for Greece and Malta), eight had household saving rates in 2018 that were higher than the EU-27 average (11.4 %) — Luxembourg, Germany, the Netherlands, France, Slovenia, Austria, Belgium and Estonia. In the remaining nine members of the euro area the saving rate was below the EU-27 average; among these, the household saving rate was negative in Lithuania (-1.2 %). 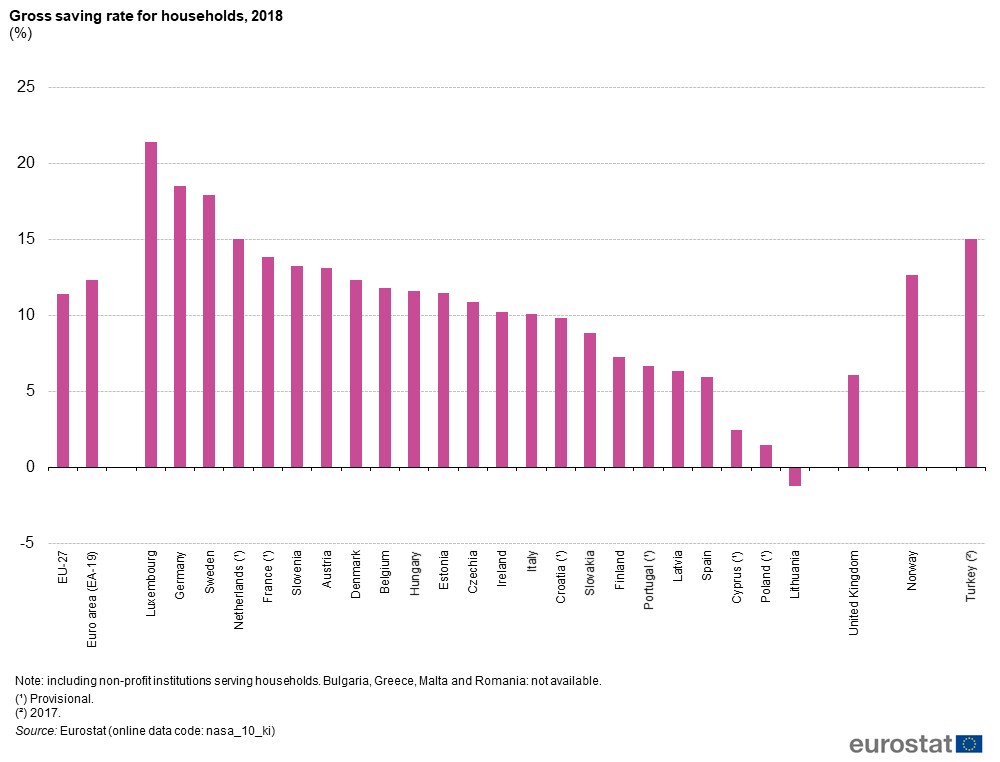 Between 2017 and 2018, the savings rate in both the EU-27 and the euro area rose, by 0.2 percentage points in the former and 0.3 points in the latter. The largest falls between 2017 and 2018 (among the EU Member States for which data are available) were observed in Lithuania (down 1.5 points), Poland (down 1.3 points) and Cyprus (down 1.2 points), while the largest increases were recorded in Sweden, Latvia (both rising 1.9 percentage points) and Czechia (up 1.4 points). 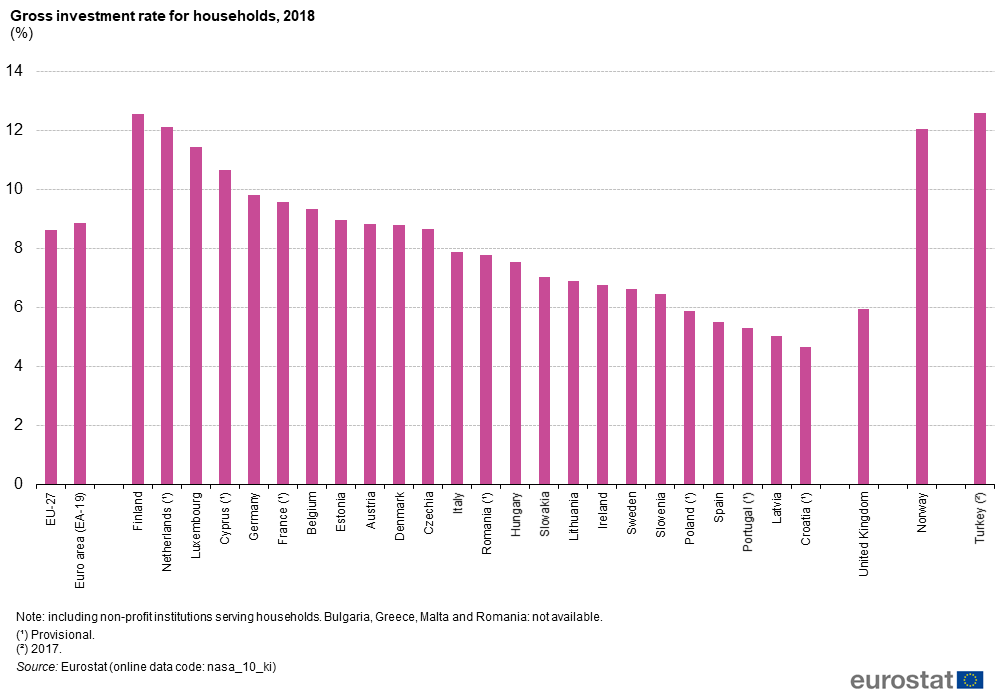 Between 2017 and 2018, the household investment rate rose by 0.2 percentage points in the EU-27 and by 0.3 points in the euro area. There was a marked decrease in the rate for Romania (down 4.8 points), whereas Cyprus (up 1.5 points), Ireland and the Netherlands (both up 1.3 points) recorded the largest increases. Elsewhere, changes in the household investment rate ranged from an increase of 0.8 points in Hungary to a decrease of 0.8 points in Poland.

In 2018, the household debt-to-income ratio in the euro area was 93.6 % (no data available for the EU-27). This ratio varied considerably between the 24 EU Member States for which data were available at the time of writing. While it was below 50 % in Romania, Hungary, Latvia, Lithuania and Slovenia, it was just under 200 % in the Netherlands and peaked at 234.4 % in Denmark; a rate of 200 % indicates that it would take two years of disposable income for households to repay their debts. It should be borne in mind that high household debt may to some extent mirror high levels of financial assets, as shown in the analysis of the household net financial wealth-to-income ratio. It may also mirror the ownership of non-financial assets, such as dwellings, or be impacted by national provisions that foster borrowing (for example, the deduction of interest payments from taxable income). 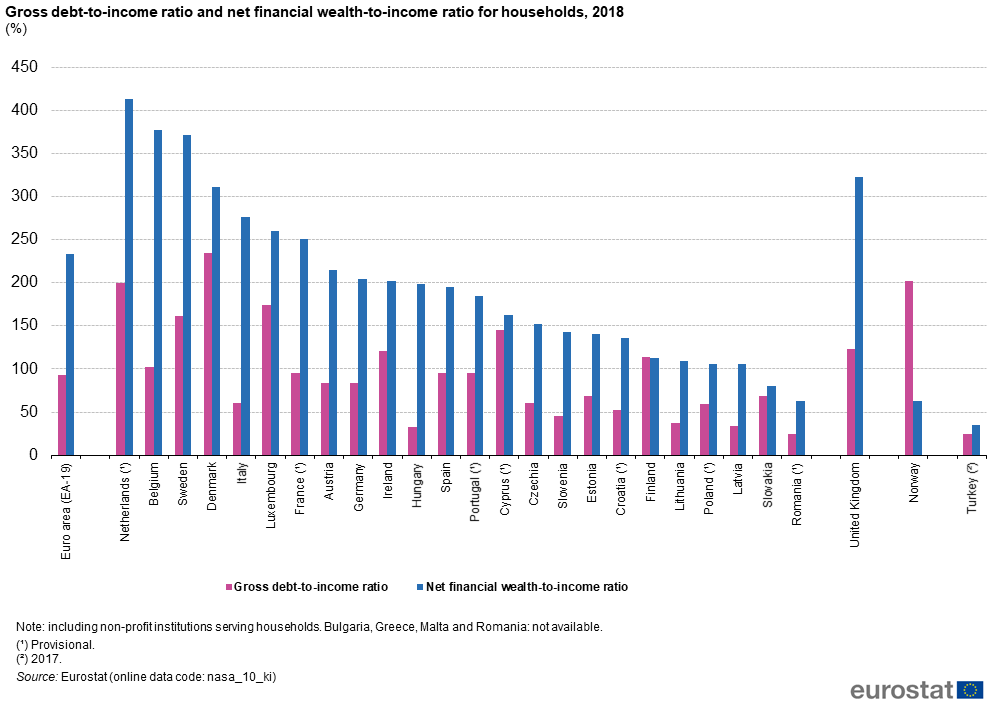 In 2018, the household debt-to-income ratio in the euro area decreased by 0.3 percentage points (when compared with 2017). By far the largest falls for this ratio were observed in Ireland (down 9.6 points) and in Cyprus (down 9.4 points), while the next largest reductions were 6.1 points in Denmark and 5.5 points in the Netherlands. By contrast, among the EU Member States for which data are available, the largest increase for this ratio was recorded in Czechia (up 4.1 points), while increases within the range of 1.8 to 2.3 points were recorded in Finland, France and Luxembourg.

In 2018, the household net financial wealth-to-income ratio for the euro area decreased by 10.8 percentage points (when compared with 2017). The ratio of household net financial wealth-to-income rose relatively rapidly in 2018 in Hungary (up 6.4 points) and to a lesser extent in Estonia (3.7 points) and Slovenia (2.9 points); smaller increases were observed in Portugal, Croatia and Lithuania. Among the 18 other EU Member States for which data are available for a comparison between 2017 and 2018, this ratio was unchanged in Latvia and decreased elsewhere. Eight Member States recorded decreases in excess of 10.0 percentage points, among which Belgium (down 24.9 points) and Sweden (down 27.6 points) posted the largest falls. 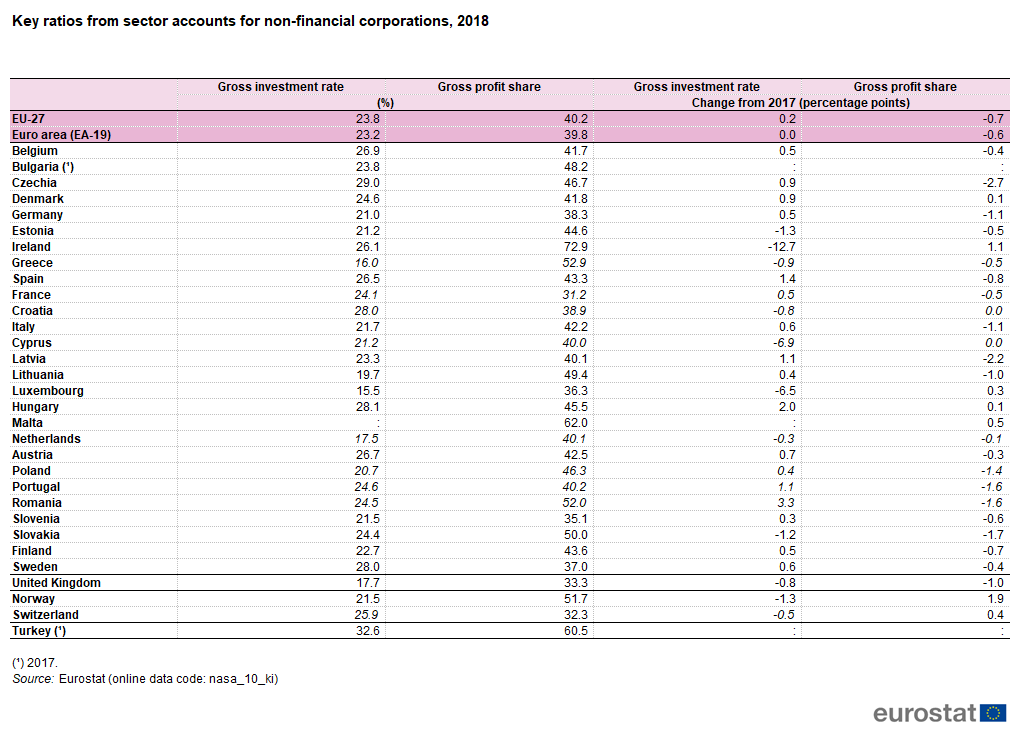 The highest business investment rate in 2018 among the 26 EU Member States for which data are available was recorded in Czechia (29.0 %), while rates were within the range of 26.1 % to 28.1 % in Hungary, Croatia, Sweden, Belgium, Austria, Spain and Ireland. Among the non-EU countries shown in Figure 4, a relatively high business investment rate was also recorded in Switzerland (25.9 %;) and most notably in Turkey (32.6 %; 2017 data). 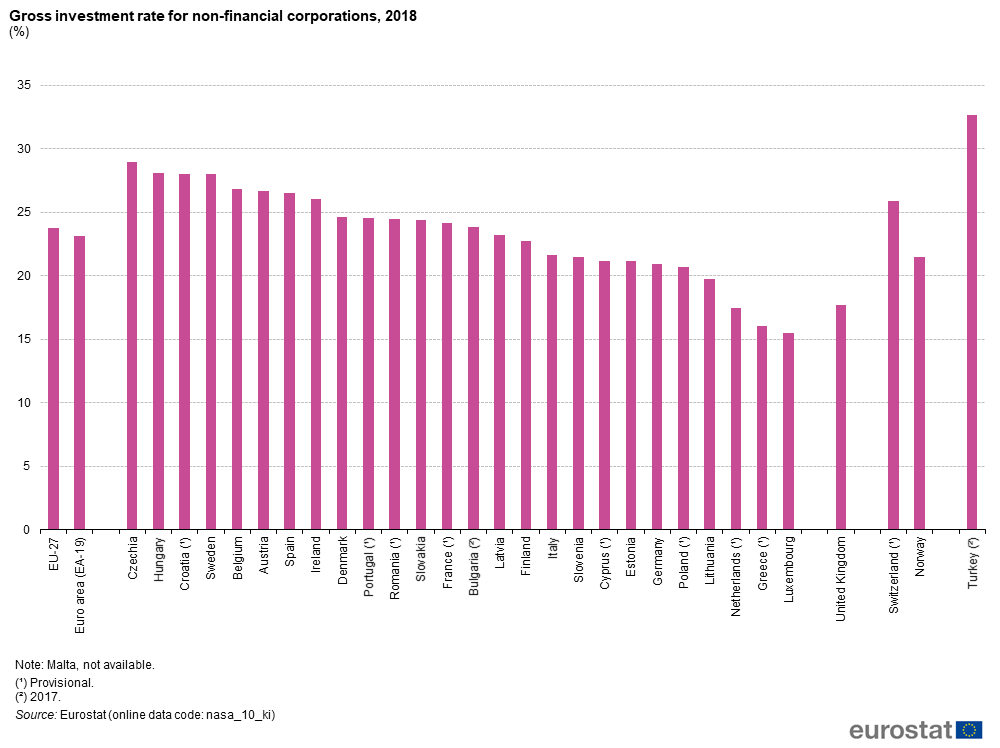 Between 2017 and 2018, the business investment rate increased in the EU-27 by 0.2 percentage points, whereas it was unchanged in the euro area. Among the 25 EU Member States (for which data are available), this rate rose between 2017 and 2018 in a majority (17) of cases, most notably in Romania (up 3.3 points). The largest decrease in the business investment rate in 2018 (compared with 2017) was recorded in Ireland (down 12.7 points), while relatively large decreases were also observed in Cyprus (down 6.9 points) and Luxembourg (down 6.5 points). 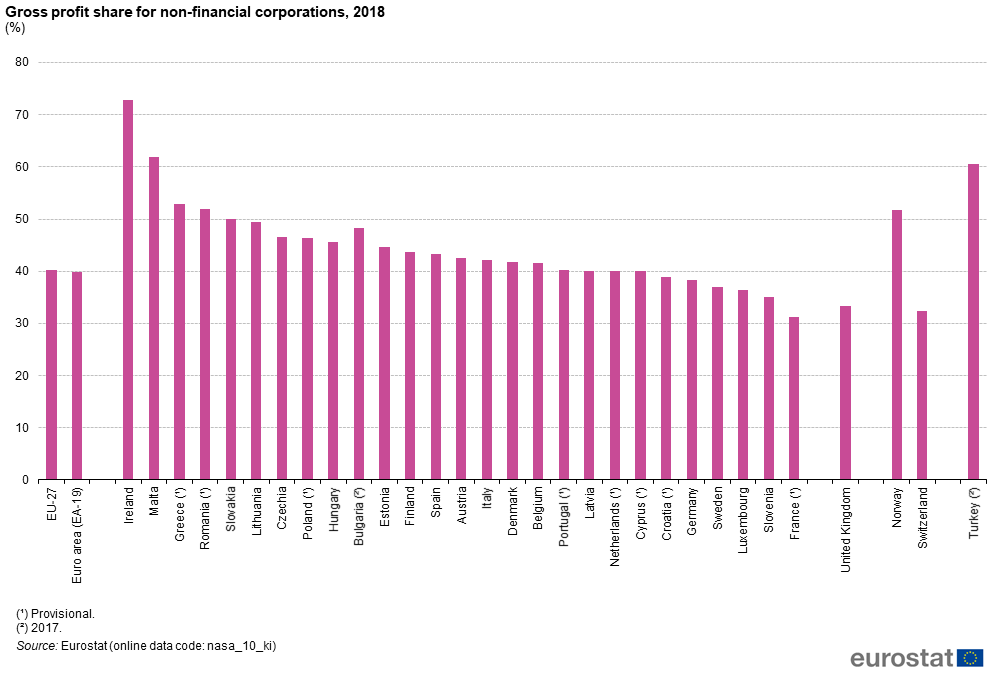 ESA 2010 replaced ESA 95 and provides an internationally compatible accounting framework for a systematic and detailed description of economic activity in the EU Member States and their regions. For more information on the transition to ESA 2010 please refer to a background article on this subject. For a detailed description on the effects of the implementation of ESA 2010 on European sector accounts please refer to an article on this subject, see pages 20-24 in EURONA (2/2014).

The household sector covers individuals or groups of individuals acting as consumers and entrepreneurs provided, in the latter case, that their activities as market producers are not carried out by separate entities. For the purpose of the analysis within this article, this sector has been merged with the relatively small sector of non-profit institutions serving households (NPISH) — examples include charities, relief and aid organisations, religious groups, consumer associations, sports and recreational clubs, professional societies, trade unions and political parties. It should be noted that the NPISH sector in the EU-27 accounts for around 2 % of the combined total financial assets and liabilities of households and NPISH.

Non-financial corporations cover enterprises whose principal activity is the production of goods and non-financial services to be sold on the market. It includes incorporated enterprises, but also unincorporated enterprises as long as they keep a complete set of accounts and have an economic and financial behaviour which is similar to that of corporations. Small businesses (such as sole traders and entrepreneurs operating on their own) are recorded under the household sector.

Sector accounts record, in principle, every transaction between economic subjects during a certain period and can also be used to show the opening and closing stocks of financial assets and liabilities in financial balance sheets. These transactions are grouped into various categories that have a distinct economic meaning, such as the compensation of employees (comprising wages and salaries, before taxes and social contributions are deducted, and social contributions paid by employers). In turn, these categories of transactions are shown in a sequence of accounts, each of which covers a specific economic process. This ranges from production, income generation and income (re)distribution, through the use of income, for consumption and saving, and investment, as shown in the capital account, to financial transactions such as borrowing and lending. Each non-financial transaction is recorded as an increase in the resources of a specific institutional sector and an increase in the uses of another institutional sector. For instance, the resources side of the interest transaction category records the amounts of interest receivable by different sectors of the economy, whereas the uses side shows interest payable. For each type of transaction, total resources of all sectors and the rest of the world equal total uses. Each account leads to a meaningful balancing item, the value of which equals total resources minus total uses. Typically, such balancing items, such as GDP or net saving, are important economic indicators; they are carried over to the next account.

Since the beginning of the economic and monetary union (EMU) in 1999, the European Central Bank (ECB) has been one of the main users of national accounts. A large number of monetary and financial indicators are evaluated in relation to other relevant data that allow the combination of monetary, financial and economic analysis, for example, key national accounts aggregates and sector accounts. In this way monetary and financial indicators can be analysed within the context of the rest of the economy.