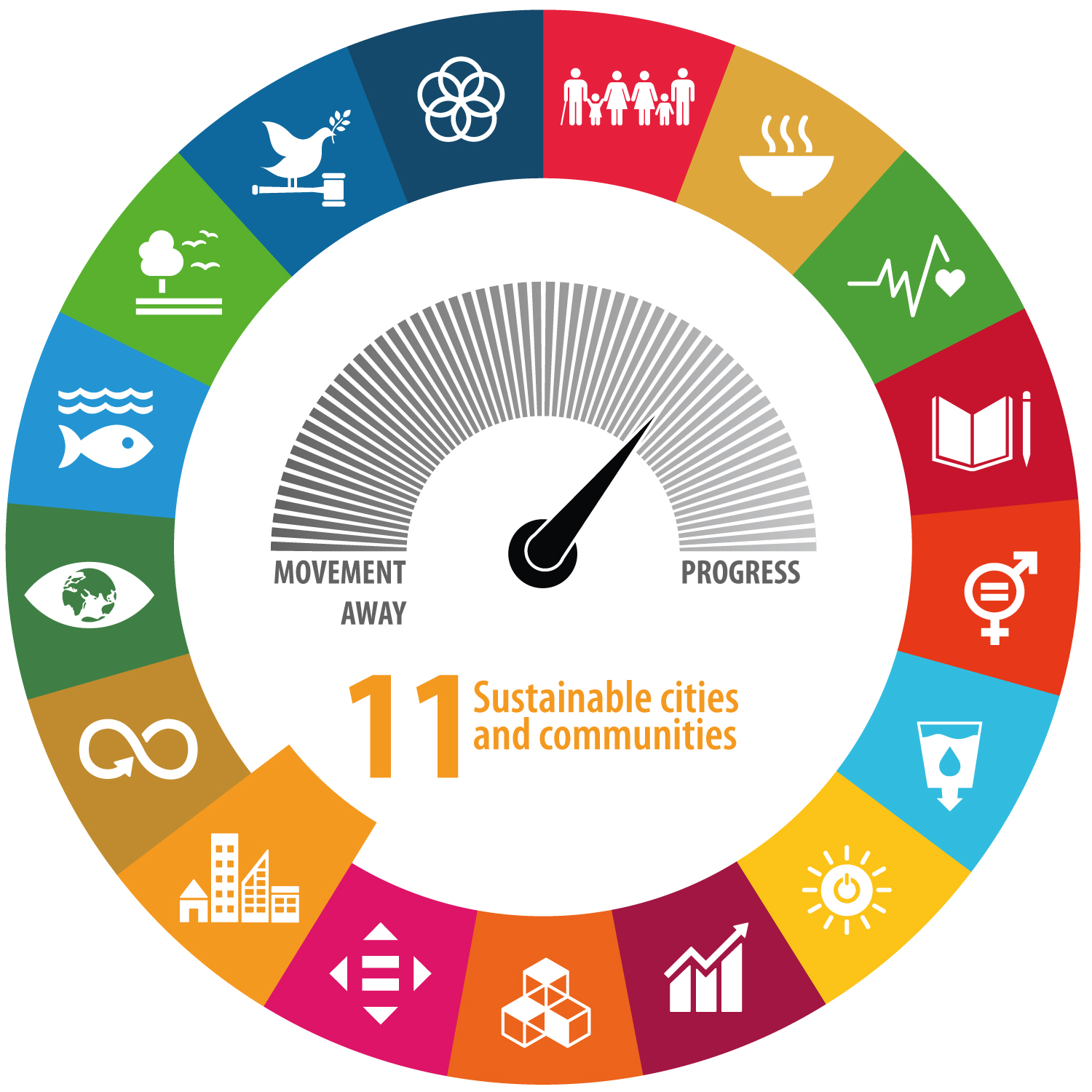 EU trend of SDG 11 on sustainable cities and communities

This article provides an overview of statistical data on SDG 11 ‘Sustainable cities and communities’ in the European Union (EU). It is based on the set of EU SDG indicators for monitoring of progress towards the UN Sustainable Development Goals (SDGs) in an EU context.

SDG 11 aims to renew and plan cities and other human settlements in a way that offers opportunities for all, with access to basic services, energy, housing, transportation and green public spaces, while reducing resource use and environmental impact.

Sustainable cities and communities in the EU: overview and key trends

Quality of life in cities and communities

While European cities and communities provide opportunities for employment, economic and cultural activity, many inhabitants still face considerable social challenges and inequalities. Problems affecting the quality of housing and the wider residential area, such as noise disturbance, crime and vandalism, are some of the most visible challenges that cities and communities can face. These can have a direct impact on a population’s quality of life.

Safe and adequate homes are a foundation for living an independent, healthy and fulfilling life. Poor housing conditions, on the other hand, are associated with lower life chances, health inequalities, increased risks of poverty and environmental hazards. In 2018, 13.6 % of EU residents experienced at least one of the following basic deficits in their housing condition: leaking roof, damp walls, floors or foundation, or rot in window frames or floor. This is 2.7 percentage points lower than the share of the population reporting such deficiency in living conditions in 2010, indicating that the perceived quality of the housing stock in the EU has improved. The overcrowding rate has also fallen since 2010, by 2.0 percentage points. However, in 2018, 17.1 % of the EU population were still living in an overcrowded home. 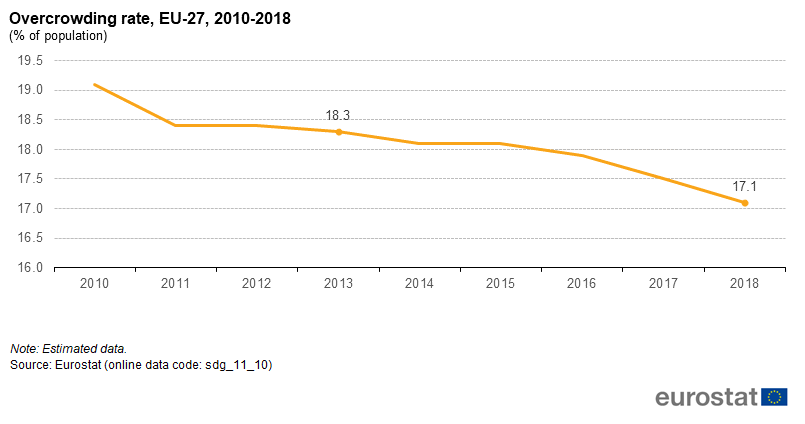 Europeans perceive their residential areas as quieter and safer

Noise disturbance, along with crime and vandalism, can negatively affect the quality of life and housing satisfaction in a residential area. Living in loud, unsafe environments can cause stress and anxiety. In 2018, 18.2 % of the EU population said their household suffered from noise disturbance, compared with 20.6 % in 2010. Crime, violence and vandalism were perceived in their area by 11.5 % of the EU population in 2018, compared with 13.1 % in 2010.

High concentrations of people and economic activities significantly increase exposure to air pollution, which represents a major environmental and health risk and influences the quality of life in cities. Pollutants such as fine particulate matter suspended in the air reduce people’s life expectancy and perception of well-being and can lead to or aggravate many chronic and acute respiratory and cardiovascular diseases [1].

The population-weighted annual mean concentration of fine particulate matter (PM2.5) in urban areas dropped from 17.5 μg/m3 in 2012 to 15.0 μg/m3 in 2017. While 15.0 μg/m3 is below the limit set by the EU from 2015 onward (25 μg/m3 annual mean) [2], substantial air-pollution hotspots remain. According to recent EEA estimates, 8 % of the EU urban population [3] were exposed to levels above the EU PM2.5 limit value in 2017. If the more stringent WHO air-quality guideline is considered (10 μg/m3 annual mean), approximately 77 % of people living in EU cities were estimated to be exposed to PM2.5 concentration levels deemed harmful to human health [4]. 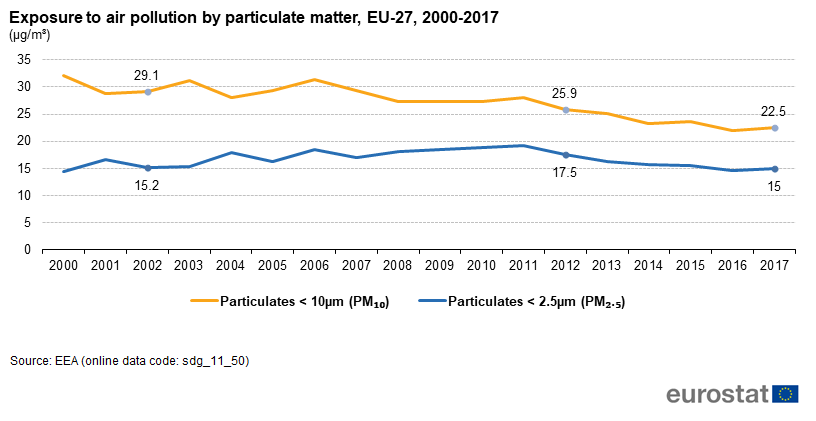 The degree of urbanisation affects overcrowding rate and perception of noise pollution, crime and vandalism

Statistics on the degree of urbanisation provide an analytical and descriptive lens through which to view urban and rural communities. Based on the share of the local population living in urban clusters and in urban centres, Eurostat differentiates between the three categories of ‘cities’, ‘towns and suburbs’ and ‘rural areas’ [5]. The prevalence of overcrowding in the EU was bigger in cities (18.7 %) than rural areas (16.7 %) in 2018 [6]. One possible explanation for this is that dwelling in rural areas tend to be larger [7]. The EU population living in towns and suburbs experienced the lowest overcrowding rate (15.4 %).

The perceived level of noise pollution varies a lot depending on the degree of urbanisation of the area of residence. In 2018, people living in EU cities were more likely to report noise from neighbours or from the street (24.2 %) compared with those living in towns and suburbs (17.2 %) or in rural areas (10.9 %) [8]. Similarly, the perceived occurrence of crime and vandalism in cities (17.4 %) was three times higher than in rural areas (5.8 %), and also above the level observed in towns and suburbs (9.2 %) [9].

A functioning transport system is required for people to reach their places of work, education, services and social activities, all of which affect the quality of life. Not only the availability but also the type, quality and safety of transport systems are crucial when designing sustainable and inclusive cities and communities.

Cars are the main means of transport in the EU

The EU aims to improve citizens’ quality of life and to strengthen the economy by promoting sustainable urban mobility and the increased use of clean and energy-efficient vehicles. Public transport networks help to relieve traffic jams, reduce harmful pollution and offer more affordable and sustainable ways to commute to work, access services and travel for leisure.

Despite good progress since 2000, a slow-down in reducing the level of road fatalities in recent years has pushed the EU off track to meeting its 2020 target

Since most passenger journeys in the EU are undertaken by car, road safety is an important factor for human health and well-being. In 2014, 1.6 % of the EU population reported they had been in a road accident resulting in injuries [10], and it is estimated that around 135 000 people are seriously injured each year [11]. In 2018, about 64 people lost their lives on EU roads every day. This corresponds to 23 339 people for the entire year — a loss equivalent to the size of a medium town. Nevertheless, the EU has made considerable progress in this respect, reducing road casualties by 23 992 over the past 15 years, which means that around 51 % less people died in road accidents in 2018 compared with 2003. However, the stagnation in the number of road fatalities since 2013 has pushed the EU off its path to reaching its ambitious 2020 target of halving the total death toll on EU roads compared with 2010, when 29 576 people died. 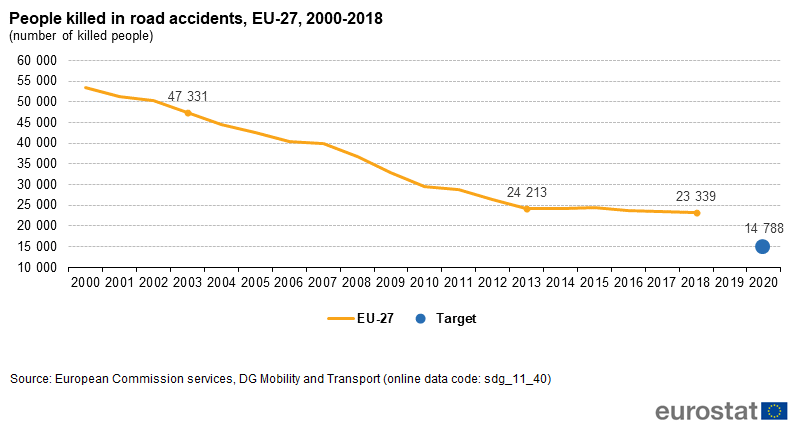 While cities, towns and suburbs serve as a focal point for social and economic activity, if not managed sustainably, they risk causing considerable environmental damage. At the same time, large and densely populated cities provide opportunities for effective environmental action, indicating that urbanisation is not necessarily a threat but can act as a transformative force towards more sustainable societies [12]. EU progress in reducing environmental impacts of cities and communities is monitored by three indicators looking into the management of municipal waste, waste water treatment and artificial land cover.

The ‘waste hierarchy’ is an overarching logic guiding EU policy on waste, which prioritises waste prevention, followed by re-use, recycling, other recovery and finally disposal, including landfilling, as the last resort. Waste management activities promote recycling, which reduces the amount of waste going to landfills and leads to higher resource efficiency. Although municipal waste accounts for less than 10 % of total waste generated in the EU [13], it is highly visible and closely linked to consumption patterns. Sustainable management of this waste stream reduces the adverse environmental impact of cities and communities, which is why the EU has set the target of 60 % of municipal waste in the EU to be recycled by 2030 [14].

In 2018, each EU inhabitant generated on average 1.35 kilograms of municipal waste per day, which was just 0.06 kg below the 2000 figure [15]. Although the EU has not substantially reduced its municipal waste generation, it has clearly shifted to more recycling. Since 2000, the recycling rate of municipal waste has increased continuously from 27.3 % to 47.4 % in 2018. 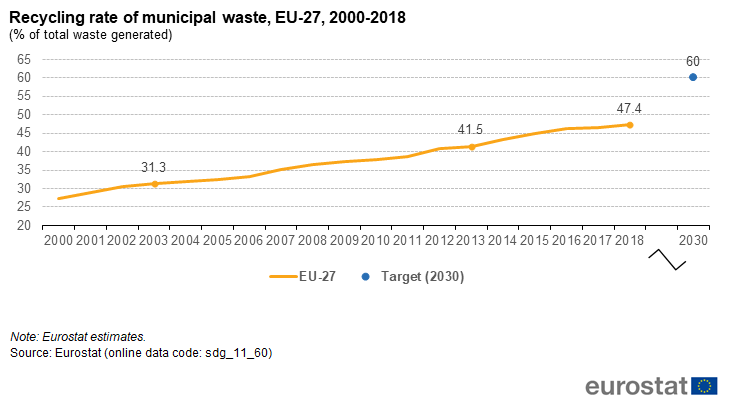 Urban areas also place significant pressure on the water environment through waste water from households and industry that contains organic matter, nutrients and hazardous substances. Between 2014 and 2017, 15 Member States reported that 80 % or more of their population were population were connected to at least secondary waste water treatment plants, which use aerobic or anaerobic micro-organisms to decompose most of the organic material and retain some of the nutrients. In nine Member States, more than 90 % of the population were connected to such services. The shares increased in all Member States between 2002 and 2017. However, it may not be suitable to connect 100 % of the population to a sewerage collection system, either because it would produce no environmental benefit or would be too costly.

Settlement area per capita has increased

Offering numerous cultural, educational and job opportunities, an urban lifestyle is increasingly attractive to Europeans, leading to a growing urban population. However, certain demographic and lifestyle trends hinder the efficient use of land in urban areas [16], leading to settlement areas expanding more quickly than populations have grown. Since the mid-1950s, the total surface area of EU cities has increased by 78 % compared with a 33 % growth in the size of the population. The loss of land and ecosystem services that this land could otherwise offer remains one of the major environmental challenges Europe is facing [17].

Despite EU efforts to halting land degradation, settlement area per capita has increased over the past few years. In 2018, for each EU inhabitant, 703.4 m² of land were covered by settlement area (comprising both sealed and non-sealed surfaces — for example, buildings, industrial and commercial area, infrastructure but also parks and sportsgrounds), which is 3.3 % more than in 2015.

Almost three-quarters of the EU population live in urban areas — cities, towns and suburbs — with more than 40 % residing in cities alone [18]. The share of the urban population in Europe is projected to rise to just over 80 % by 2050 [19]. Cities, towns and suburbs are therefore essential for Europeans’ well-being and quality of life. They also serve as hubs for economic and social development and innovation. They attract many people thanks to the wide range of opportunities for education, employment, entertainment and culture on offer. This large concentration of people and wealth, however, often comes with a range of complex challenges. Ensuring sustainable and healthy mobility, such as walking or cycling, through better urban planning and by improving the accessibility and attractiveness of public transport systems, among other measures, is one of these challenges. Another is dealing with cities’ negative environmental impacts, such as the spread of the settlement areas or the large amounts of waste generated in urban areas. Cities are consequently seen as both a source of economic, environmental and social challenges as well as a solution to these issues. As such, they can be considered a key driver for achieving a sustainable future.