In 2018, around 23 400 persons were killed in road accidents in the EU: 45% of the fatalities were passenger car drivers or passengers; 21% were pedestrians.

This article focuses on the number of persons killed in road accidents, by type of vehicle for the year 2018. The data are extracted from the CARE database (the Community database on road accidents resulting in death or injury). CARE contains detailed data on individual accidents collected by the EU Member States from police and hospital sources. This allows a high level of disaggregation, but consolidation of the data takes considerable time.

In 2003, the European Commission adopted its third European action programme for road safety, which aimed to halve the number of road deaths by 2010. While the initial target was not quite met by the end of 2010, it was decided to continue with a target of halving the overall number of road deaths in the EU by 2020, starting from 2010. 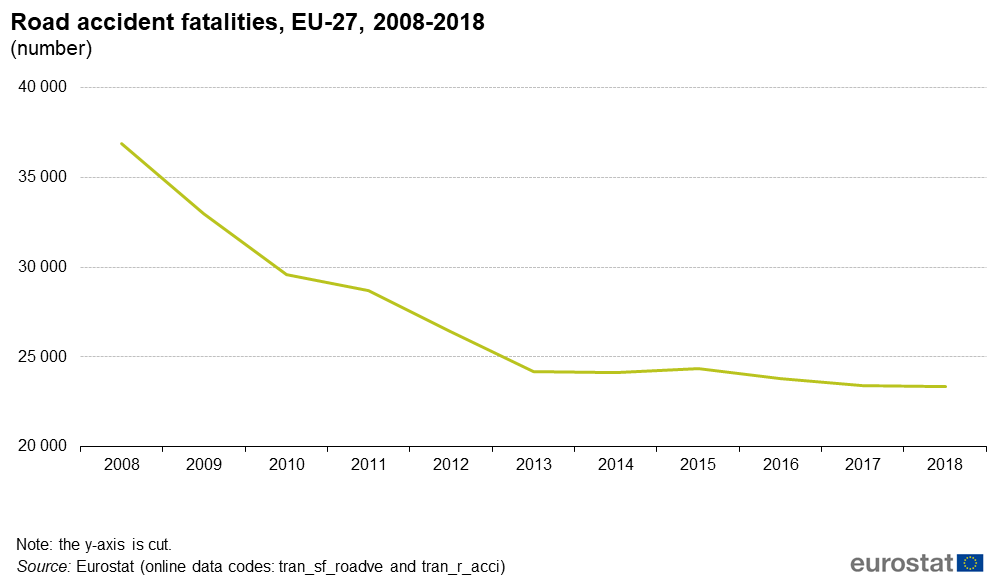 The number of persons killed in road traffic accidents has fallen considerably over the last 20 years: the number of fatalities in the 27 EU Member States fell by 37 % between 2008 and 2018. However, the figure in 2018 was close to unchanged from 2017, down only -0.2 %. Given the slow decrease in persons killed in road accidents between 2013 and 2018, further efforts will be needed to meet the target of halving the number of fatalities compared to 2010.

By contrast, the increasing popularity of cycling is tragically reflected in the increasing number of cyclists killed per million inhabitants, despite efforts undertaken to create safer bicycle lanes and dedicated bicycle roads. The Netherlands, renowned for being bicycle-friendly and for investing in bicycle infrastructure, recorded a relatively high ratio of deaths among cyclists of 7.1 per million inhabitants in 2018, up from 5.9 the previous year. However, Romania (9.3 cyclists killed in road accidents per million inhabitants), Belgium and Lithuania (both 7.8; Lithuania 2015 data) had considerably higher rates in 2018.

The high ratios of motorcyclists killed in accidents in Greece (17.7 per million inhabitants), Malta (16.8) and Cyprus (16.2) in 2018 may be explained by greater use of motorised two-wheelers there, because motorcycle use is much more dependent on weather and the season. These countries also welcome a high number of tourists every year, with many of these renting motorcycles during their holidays and thus adding to the number of motorcyclists on the roads.

A more accurate assessment of road accident fatalities could be carried out if road accident data could be compared with total traffic. However, reliable road traffic data are difficult to obtain. 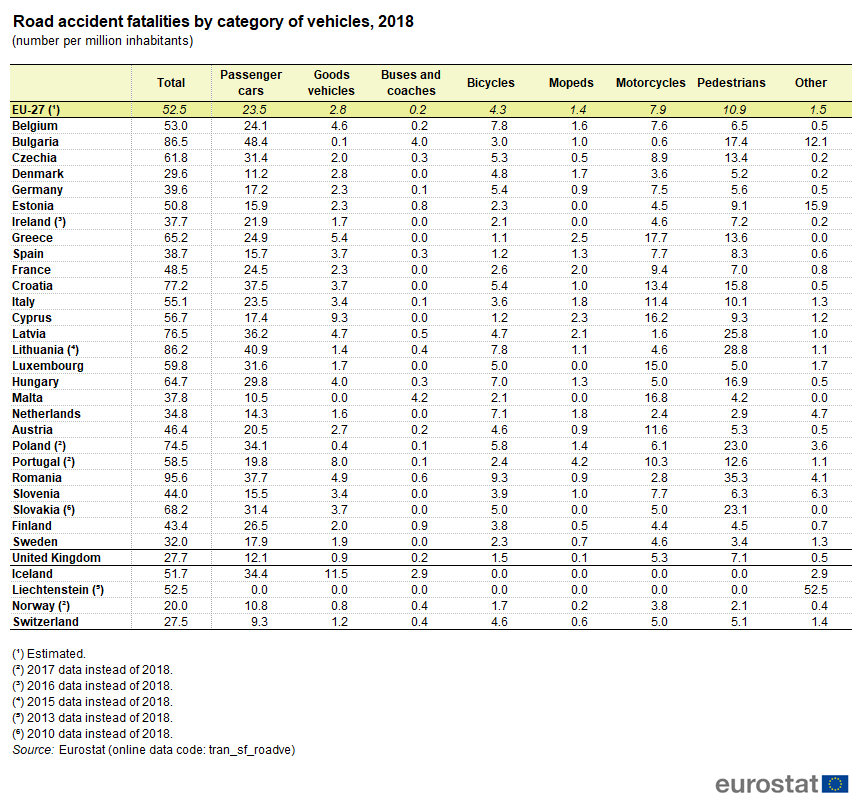 Unsurprisingly, car drivers and passengers represented the largest category of road traffic deaths in the EU in 2018, with 44.8 % of all road traffic fatalities (see Figure 2). Pedestrians (20.7 %) was the second largest category, slightly ahead of motorcyclists and their passengers (15 %). Cyclists accounted for 8.2 % of EU road deaths in 2018; however, in individual countries, this proportion can be as high as 20 %. Moreover, cycling deaths are under-reported: some accidents involving cyclists are not reported to the police. The remaining vehicle categories together accounted for 11.3 % of the road accident fatalities in the EU in 2018: light and heavy goods vehicles, buses and coaches, mopeds and ‘other’ (essentially, agricultural tractors and other motorised vehicles). 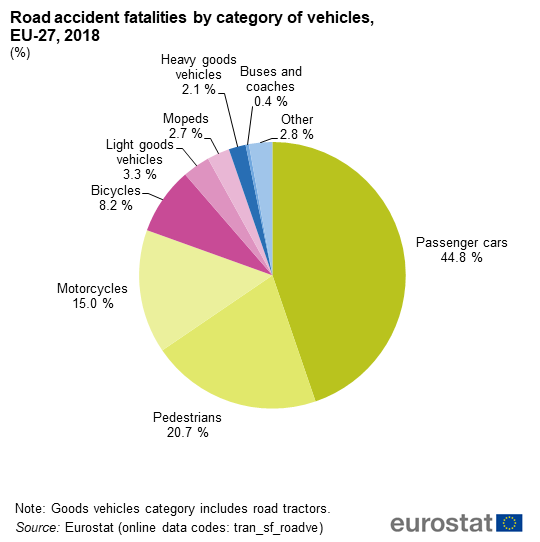 Over the last decade, the largest reduction in the number of road accident fatalities in the EU-27 was observed among car drivers and their passengers (-39.9 %), followed by motorcyclists and moped drivers (and their passengers) (-35.7 %), pedestrians (-30.4 %) and occupants of goods vehicles (-29.3 %). This shows that the many measures taken to improve road safety are paying off. The falls in the number of fatalities among buses and coaches (-19.8 %) and cyclists (-14.3 %) were smaller. 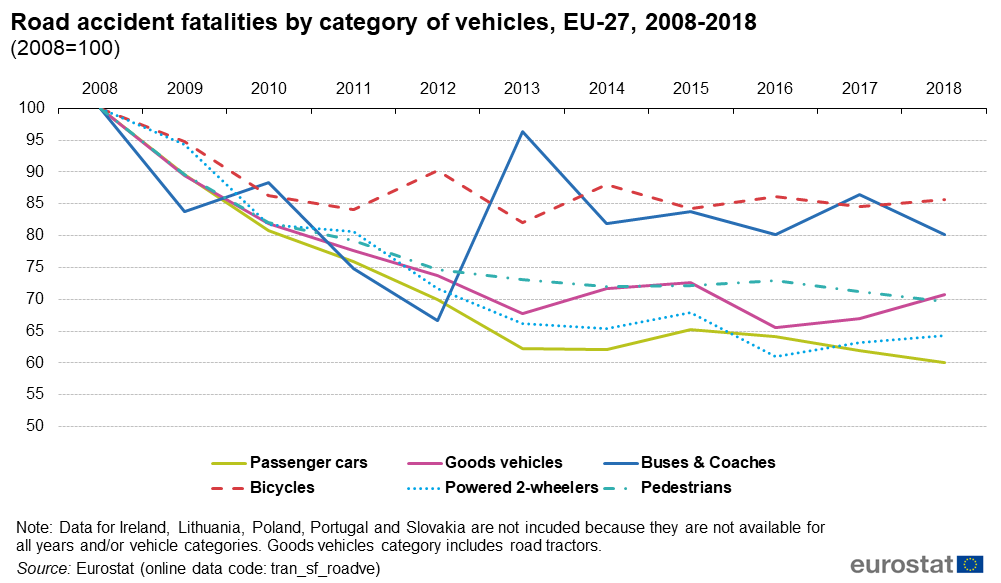 Accidents with goods vehicles claimed 1 260 lives among their occupants in 2018 (the deaths of drivers/passengers of any other vehicles involved are counted in other categories). Accidents involving light goods vehicles (up to 3.5 t maximum mass) accounted for around 60 % of these goods vehicle fatalities. These vehicles are often delivery vans, which are not required to have speed-limiting devices and/or tachographs (recording distance, speed and operation times). In various countries, these vehicles were found to be involved in accidents quite often. EU-wide studies on light goods vehicles have been carried out e.g. under IMPROVER (Impact Assessment of Road Safety Measures for Vehicles and Road Equipment — see link at the end of this article) and action undertaken under the ‘roadworthiness package’ (see link) adopted in 2014. This includes enhanced technical inspections for high-mileage vehicles and more roadside inspections.

However, Greece had the third highest share of motorcycle fatalities among the EU Member States: in 2018, 27.1 % of all road accident fatalities in Greece occurred among motorcyclists. Malta had the highest share (44.4 %) of motorcyclists among the road fatalities, far ahead of Cyprus in second place (28.6 %). In the remaining ‘two-wheeled’ category —mopeds — accounted for 7.1 % of all road accident fatalities in Portugal (2017 data), a much larger share than the next highest countries (Denmark with 5.8 %, the Netherlands with 5.2 %). The figures are shown in Table 2. 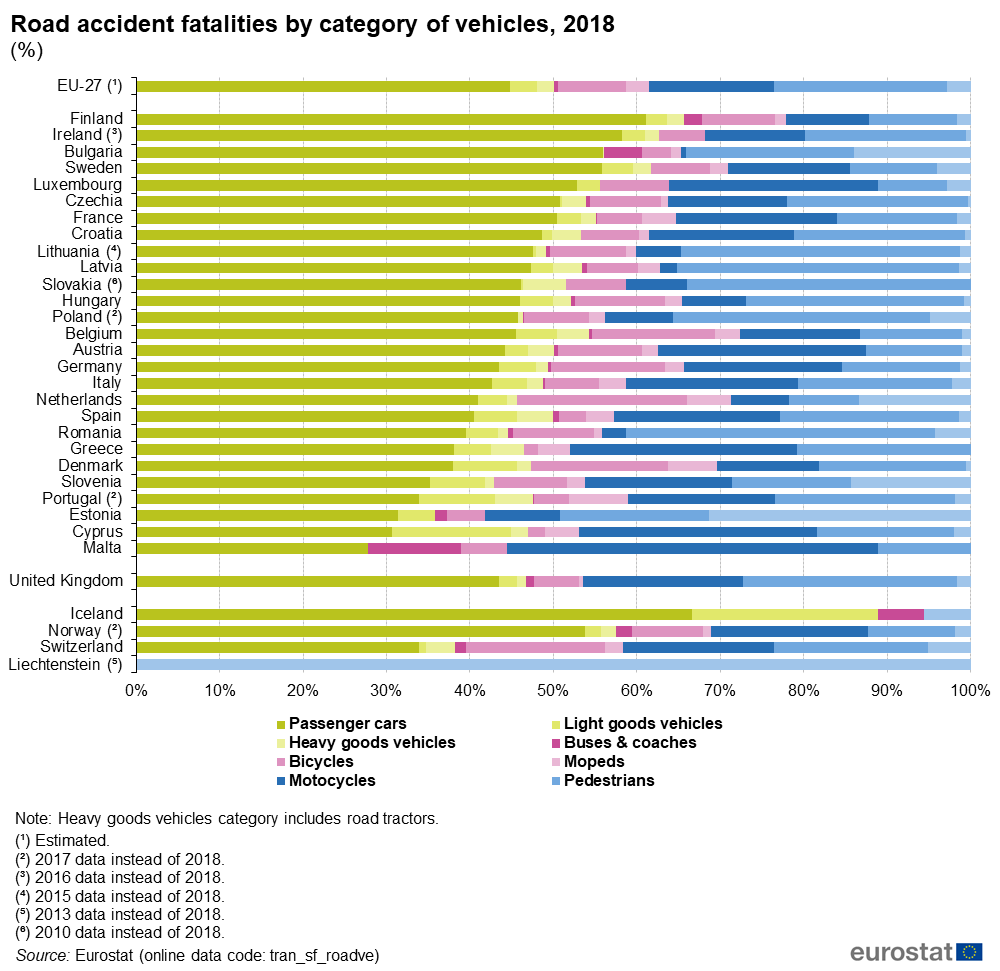 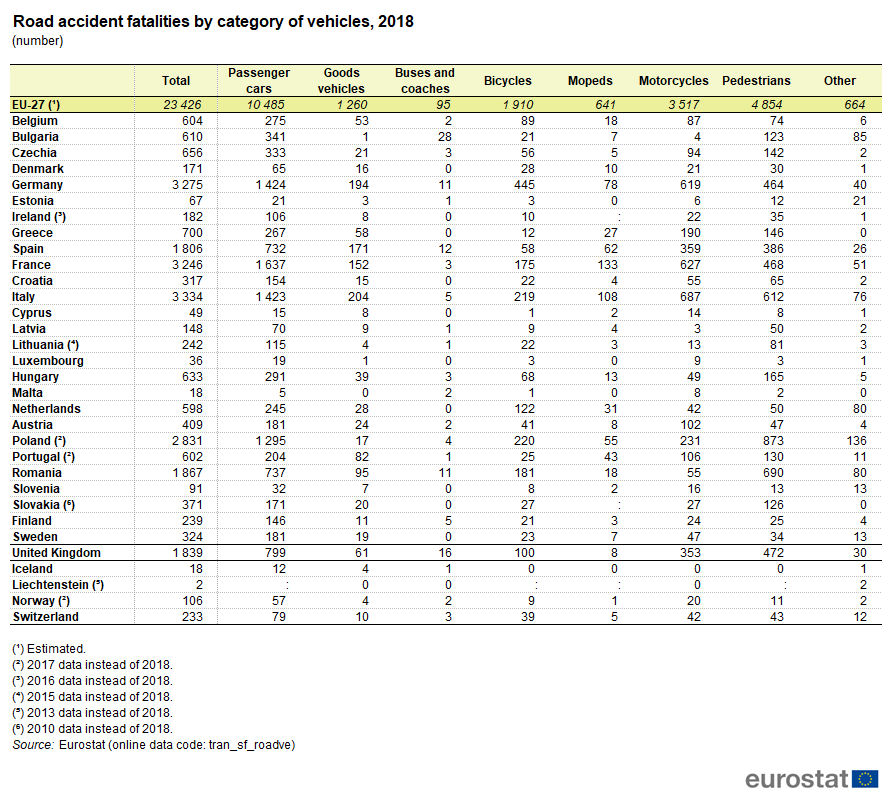 Pedestrians particularly at risk in in Romania

Member States have taken a variety of measures to reduce the number of deaths: education campaigns, legal enforcement and infrastructure improvements (pedestrian crossing design, visibility). The industry has also improved vehicle design (making the front of vehicles pedestrian-friendlier) to address this issue.

The purpose of CARE is to provide a tool that makes it possible to identify and quantify road safety problems throughout Europe, evaluate the efficiency of road safety measures, determine the relevance of EU action and facilitate the exchange of experience in this field. Parts of the national data sets have been incorporated in the CARE database with their original national structure and definitions. However, as existing national accident data collection systems are not always compatible or comparable between countries, the European Commission provides and applies transformation rules for the national data sets, allowing CARE to have compatible data. Eurostat’s reference database uses CARE data in a number of tables linked to road safety. Various tables are available. It is possible that the two sources differ, as there are regular data updates and updating is not synchronised.

Data in this article are limited to the number of persons fatally injured, resulting in death within 30 days of the road accident. Confirmed suicide and natural deaths are not included. Since 2010, all reporting countries apply this rule.

Please note that data referring to the French Départements d’Outre-Mer (overseas territories) and the Portuguese autonomous regions of Açores and Madeira are not available. The ‘fatalities per million inhabitants’ ratio takes this situation into account.

Regional data collected on voluntary basis has been used for Figure 1.

In response to the growing concern among European citizens over road safety, the European Union made this issue a priority of its common transport policy set out in the 2001 White Paper on transport: European transport policy for 2010: time to decide and its mid-term review in 2006 (Keep Europe moving — Sustainable mobility for our continent). In the White Paper, the European Commission set the target of halving the number of road fatalities between 2000 and 2010. A variety of measures helped to cut the total road number of deaths by 44 % between 2000 and 2010. The target of halving the 2000 number was reached in 2012.

Following on from that, the 2011 White Paper Roadmap to a Single European Transport Area — Towards a competitive and resource efficient transport system set out 40 practical measures for the next decade. On road traffic, the Commission has adopted an ambitious road safety programme that aims to cut road deaths in Europe in half between 2010 and 2020. The programme sets out a mix of initiatives, at European and national level, focusing on improving vehicle safety, the safety of infrastructure and road users’ behaviour.