(Redirected from Greenhouse gas emissions by industries and households)
Jump to: navigation , search

Highlights
Tweet
In 2018, emissions of greenhouse gases generated by economic activities of EU resident units stood at 4 billion tonnes of CO2 equivalents, 13.5 % lower than in 2008. 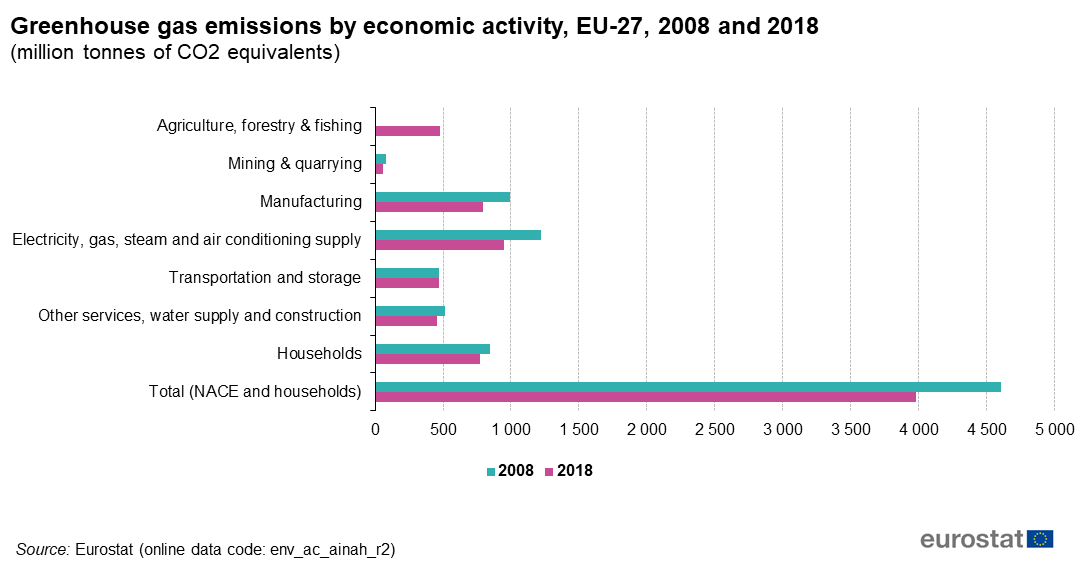 This article is about emissions of greenhouse gases (GHG emissions) classified by emitting economic activities. Eurostat records and publishes these in air emissions accounts (AEA), one of the modules in the European environmental economic accounts (for which the legal basis is Regulation (EU) No 691/2011). AEA are suited for integrated environmental-economic analyses such as calculating emission intensities or 'footprints'.

In 2018, GHG emissions generated by industries and households in the EU-27 stood at 4 billion tonnes of CO2 equivalents.

Air emissions accounts offer a detailed analysis by 64 emitting industries (classified by NACE) as well as households as defined and classified within national accounts. For the purpose of this article these 64 industries have been further aggregated to six groupings.

In most activities carbon dioxide was the most emitted GHG. Agriculture, forestry and fishing and mining and quarrying were the the only groupings of activities where emissions of methane and nitrous oxide (expressed in CO2 equivalents) were greater than those of carbon dioxide (see Figure 2). 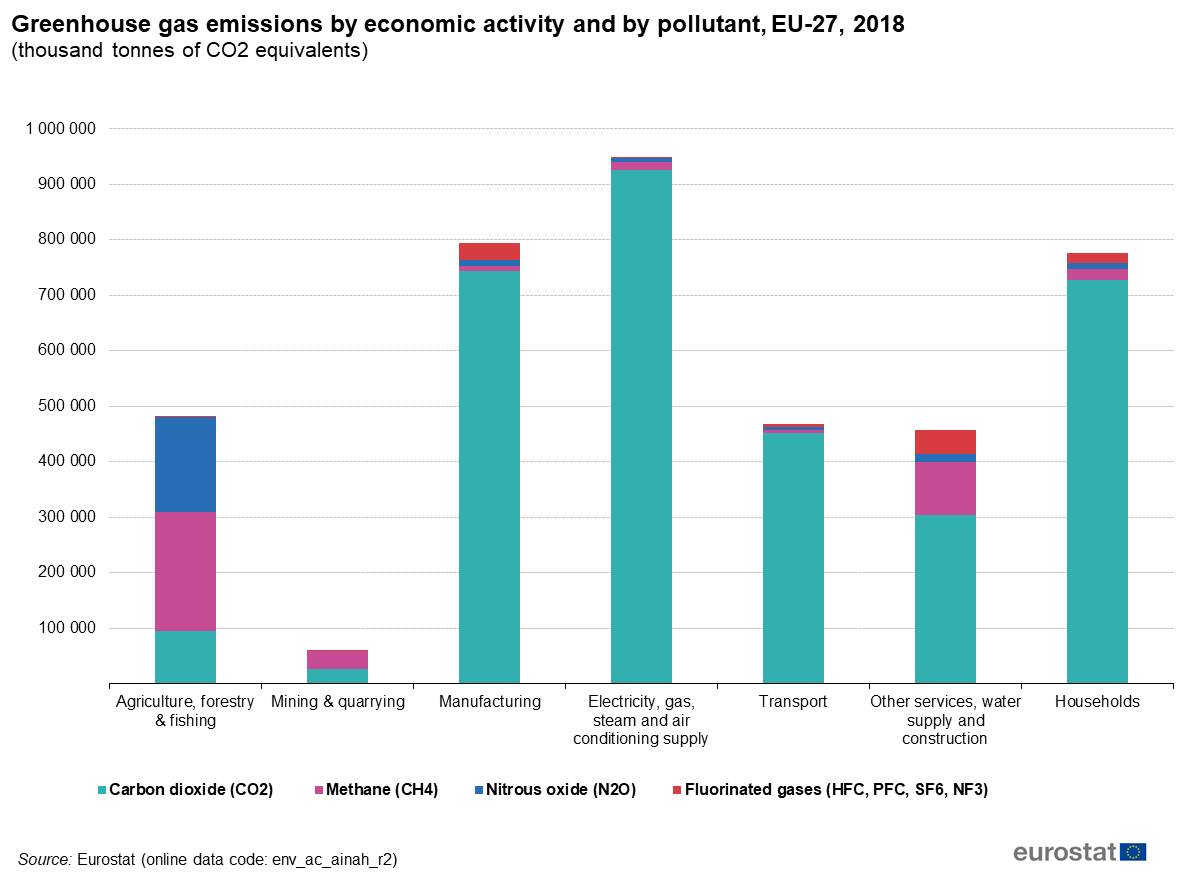 Between 2008 and 2018 the level of emissions from the supply of electricity, gas, steam and air conditioning fell by 271 million tonnes of CO2 equivalents, a fall of 22.2 % in relative terms. In absolute terms this was the largest decrease recorded among the activity groupings studied. It was followed by manufacturing, where emissions decreased by 200 million tonnes (20 % in relative terms).

Analysis across the EU Member States

Among the EU Member States, the GHGs emitted by the various producers and households varied considerably (see Table 1). These differences are, in part, due to different economic structures and different mixes of renewable and non-renewable energy sources. In ten EU Member States businesses supplying electricity, gas, steam and air conditioning were the main producers of GHGs in 2018, while in seven more Member States manufacturing was the main producer. In Ireland and Latvia the activities of agriculture, forestry and fishing were the main emitters while in Denmark, Lithuania, Luxembourg and Malta transportation and storage activities were the main source of greenhouse gas emissions. Households were the main source of GHGs in France, Croatia, Italy and Hungary. 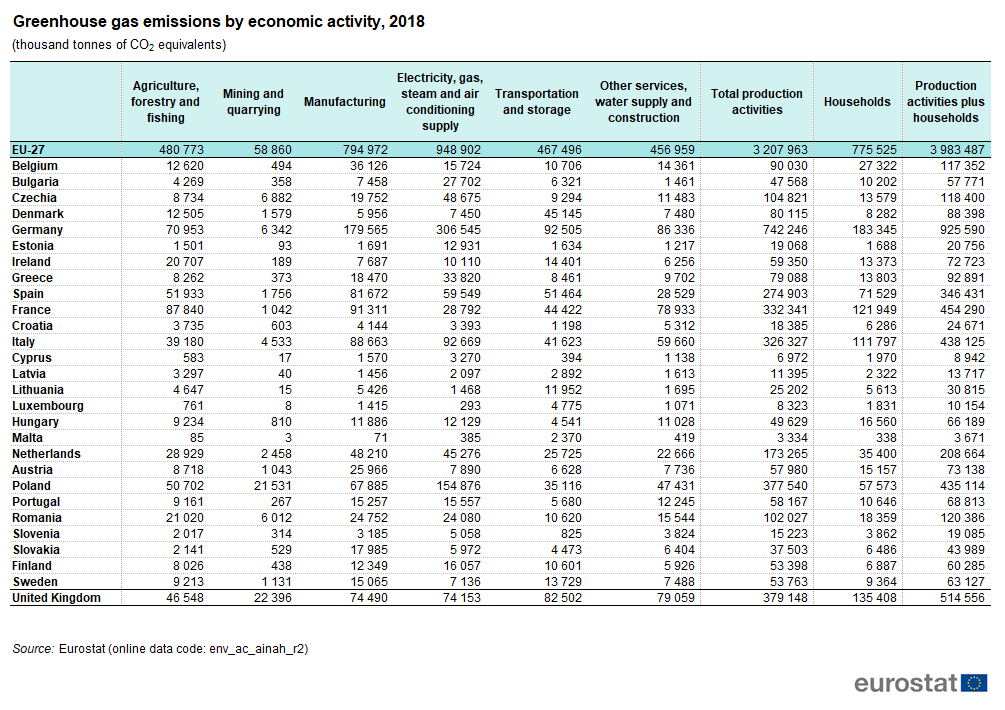 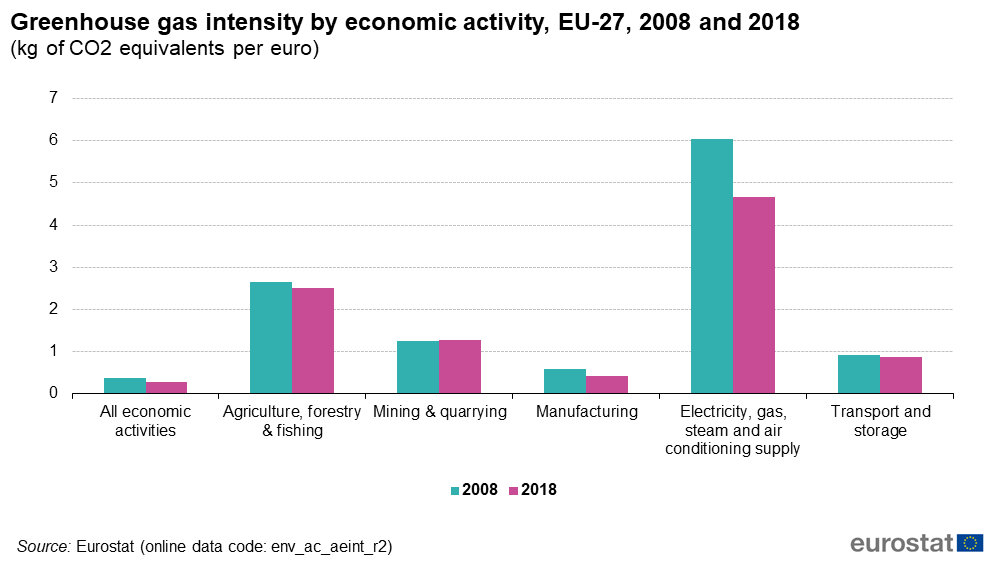 Eurostat calculates early estimates for greenhouse gases in air emissions accounts (timeliness: T+12 months). The developed methodology is based on the Proxy GHG inventories published by the European Environment Agency. In Figures 1, 2, 3 and Table 1 of this article, year 2018 data are the early estimates calculated by Eurostat.

The need to supplement information on the economy with environmental indicators was recognised in a European Commission Communication titled ‘GDP and beyond’ (COM(2009) 433). Furthermore, similar recommendations were made within the so-called Stiglitz report, released by the Commission on the Measurement of Economic Performance and Social Progress. Such recommendations support the analysis of statistics on human well-being to supplement economic indicators such as gross domestic product, for example by including physical indicators related to the environment.