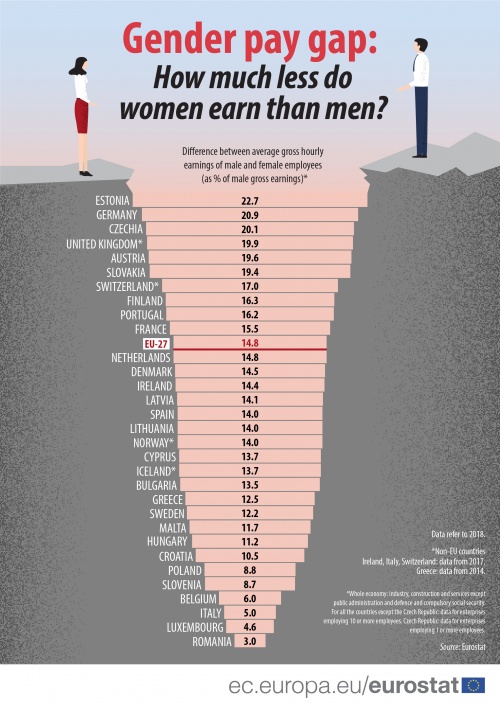 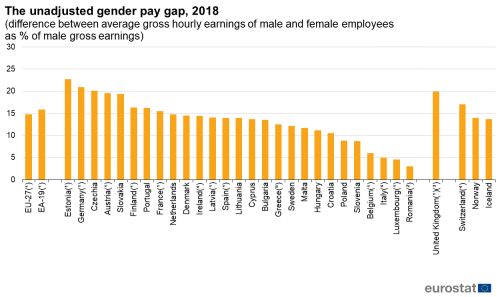 Pay gaps can also be analysed from the perspective of part-time or full-time employment. Information at this level of detail is not available, however, for all EU Member States (Figure 2). In 2018, the gender pay gap for part-time workers varied from -0.3 % in Germany to 24.0 % in Portugal. A negative gender pay gap means that on average women's gross hourly earnings are higher than those of men. For full-time workers, pay gaps varied also widely in the EU Member States, ranging from 0.9 % in Belgium to 18.9 % in Slovakia. 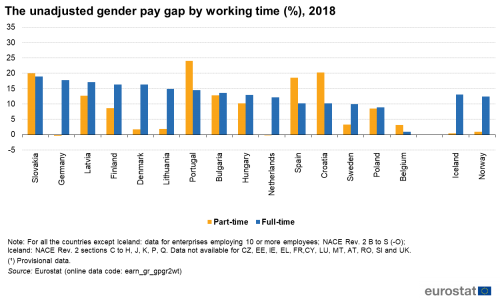 The gender pay gap is generally much lower for new labour market entrants and tends to widen with age. However, those differences over age groups can have different patterns across the countries (Table 1). The gender pay gap might increase with age as a result of the career interruptions women experience during their working life, particularly older women unable to benefit from specific equality measures which did not yet exist when they started to work. 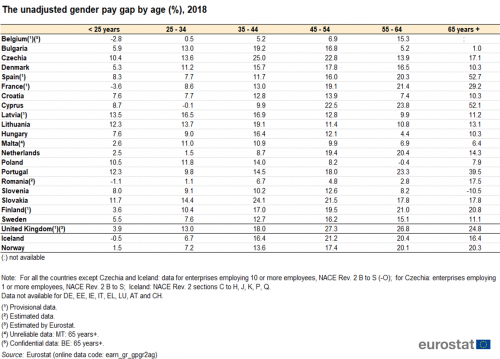 A breakdown for the different sectors of the economy also reveals interesting patterns (Table 2). In all EU Member States, except Spain, the gender pay gap in the financial and insurance activities (NACE Rev. 2 section K) is higher than in the business economy as a whole (NACE Rev. 2 aggregate B to N). In 2018, the gender pay gap in financial and insurance activities varied from 18.3 % in Spain and Denmark to 39.0 % in Czechia. Within the business economy as a whole, the highest gender pay gap was recorded in Germany (24.7 %) and the lowest in Sweden (8.7 %). 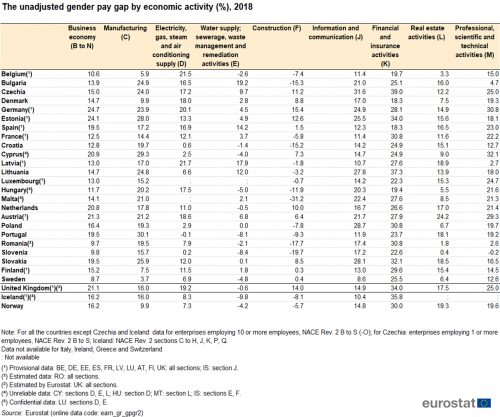 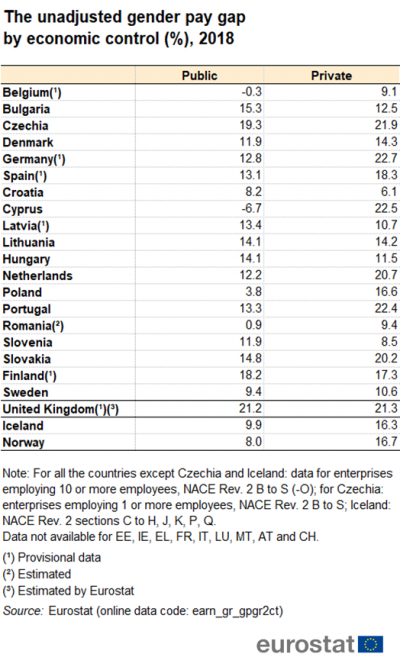 As an unadjusted indicator, the gender pay gap gives an overall picture of the differences between men and women in terms of earnings and measures a concept which is broader than the concept of "equal pay for work of equal value". A part of the difference in earnings of men and women can be explained by differences in the average characteristics of male and female employees. In its methodological study, Eurostat carried out the decomposition of the unadjusted gender pay gap based on the 2014 data of the Structure of Earnings Survey.

From reference year 2006 onwards, the unadjusted gender pay gap is based on the methodology of the Structure of earnings survey (SES) according to Regulation (EC) No 530/1999. The SES is carried out with a four-yearly periodicity. The most recent reference years available for the SES are 2010 and 2014. Eurostat computed the gender pay gap for these years on this basis. For the intermediate years (2011-2013) countries provide to Eurostat gender pay gap estimates benchmarked on the SES results.

Reducing the gender pay gap is one of the key priorities of gender policies at both EU and national levels. At EU level, the European Commission prioritised "reducing the gender pay, earnings and pension gaps and thus fighting poverty among women" as one of the key areas in the framework of the Strategic engagement for gender equality 2016-2019. The unadjusted gender pay gap indicator is used to monitor imbalances in earnings between men and women.