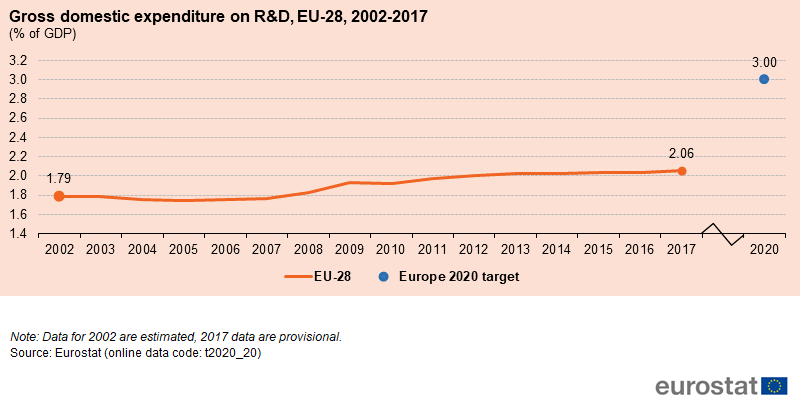 This article is part of a set of statistical articles on the Europe 2020 strategy. It provides recent findings on research and development (R&D) and innovation in the European Union (EU).

The Europe 2020 strategy is the EU’s agenda for growth and jobs for the current decade. It emphasises smart, sustainable and inclusive growth as a way to strengthen the EU economy and prepare its structure for the challenges of the next decade. R&D and innovation are key policy components of the Europe 2020 strategy. Innovative products and services not only contribute to the strategy’s smart growth goal but also to its inclusiveness and sustainability objectives. Introducing new ideas to the market promotes industrial competitiveness, job creation, labour productivity and the efficient use of resources. R&D and innovation are also essential for finding solutions to societal challenges such as climate change and clean energy, security and active and healthy ageing.

The Europe 2020 strategy sets the target of ‘improving the conditions for innovation, research and development’ [1], in particular with the aim of ‘increasing combined public and private investment in R&D to 3 % of GDP’ by 2020 [2]. 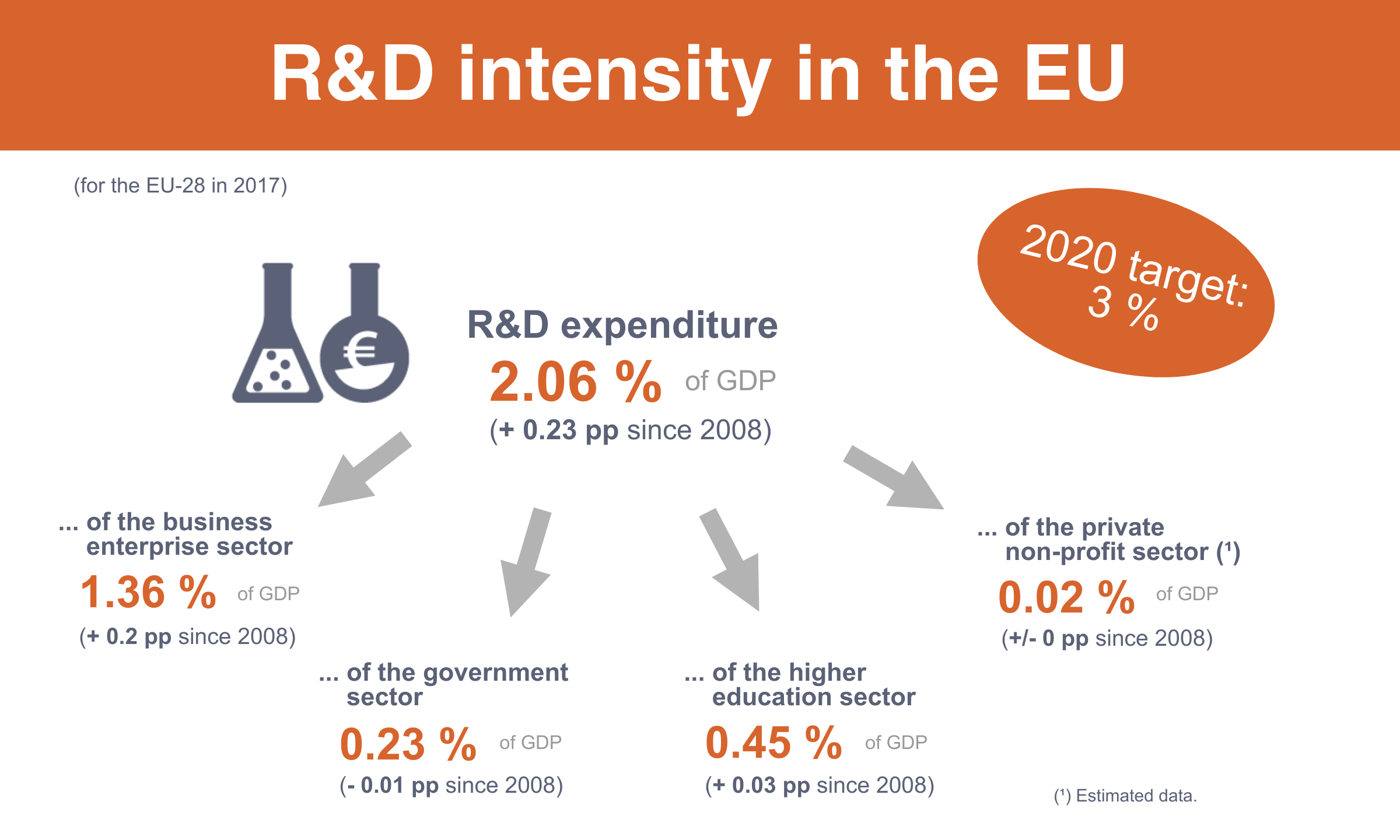 The headline indicator ‘gross domestic expenditure on R&D’, also referred to as R&D intensity, shows the proportion of gross domestic product (GDP) dedicated to research and development [3]. As shown in Figure 1, the EU’s R&D expenditure surpassed 2.0 % of GDP in 2013, and has more or less stagnated close to this level since then. The EU has therefore not seen a strong move towards its 3 % R&D intensity target for 2020 over the past few years, making its achievement more and more unlikely [4].

Due to this stagnation, the EU is also increasingly lagging behind other advanced economies, such as the United States, Japan and South Korea. While in 2000 the EU accounted for 25 % of global R&D expenditure, this share had fallen to 20 % by 2015.

Considerable differences across countries underlie the overall EU figure, with R&D intensities ranging from 0.5 % to 3.4 % in 2017 (see Figure 2). Differences in R&D investment, in particular business R&D spending, between countries generally reflect differences in their industrial structures, knowledge intensity of sectors and research capabilities [7].

Between 2008 and 2017, R&D intensity increased in most Member States, with the strongest growth rates reported in some eastern and southern European countries such as Slovakia, Greece and Poland. These countries’ convergence towards the EU average R&D intensity levels has been partly driven by the increased use of European Structural and Investment Funds for research and innovation (R&I) activities [8]. Nevertheless, in 2017 R&D intensity in these countries was still almost twice as low as the overall EU R&D intensity. 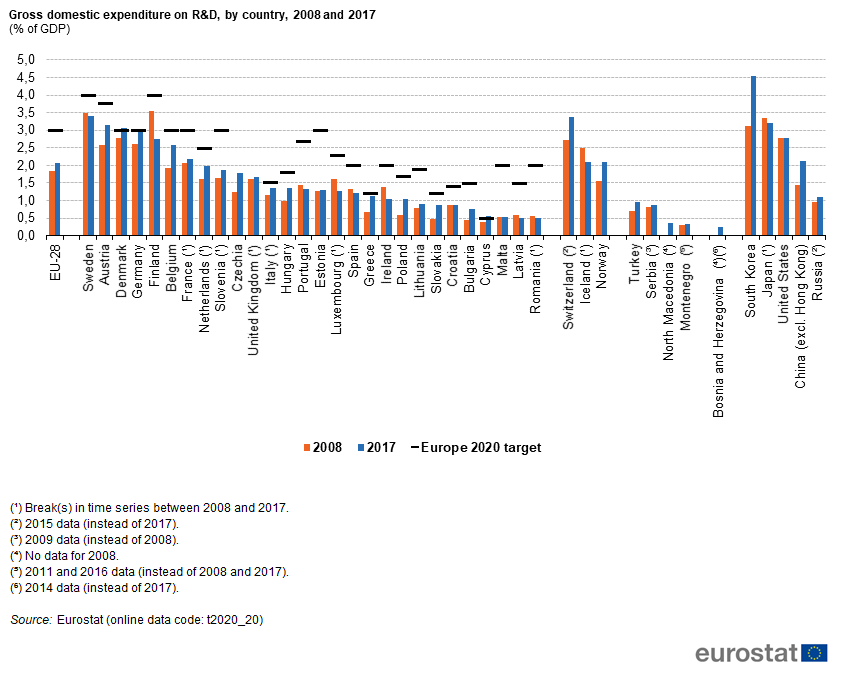 R&D activities are performed by four main institutional sectors: business enterprise, government, higher education and the private non-profit sector. Figure 3 illustrates the distribution of R&D expenditure between these four sectors in 2008 and 2017.

This growth has further strengthened the business enterprise sector’s position as the biggest investor in R&D. In 2017, it spent EUR 209.2 billion on R&D, accounting for about two-thirds of the EU’s total R&D expenditure. It has also been responsible for the slight increases in the EU’s total R&D intensity since 2012.

In 2017, public spending on R&D (which includes higher education and government sectors) amounted to only about a third of total R&D expenditure in the EU. However, the public sector does have an important role to play in R&D expenditure, especially in terms of maintaining its long-term stability. This includes performing ‘far from the market’ research [10] and research that is of social, environmental or security importance (for example, health, quality of life, environment and defence). It also establishes the basis for the R&D activities of businesses and compensates for reduced business R&D expenditure during economic downturns [11].

Figure 5 illustrates country differences between public and private R&D intensities. The private sector — mainly business enterprises — remains the biggest spender on R&D in the most research-intensive countries. However, in some of the least research-intensive countries, such as the Baltic countries and some southern Member States, the public sector — higher education and government — tends to spend more on R&D than the private sector. There are, however, exceptions to this pattern in the east (Hungary and Slovenia) with above-average private expenditure. 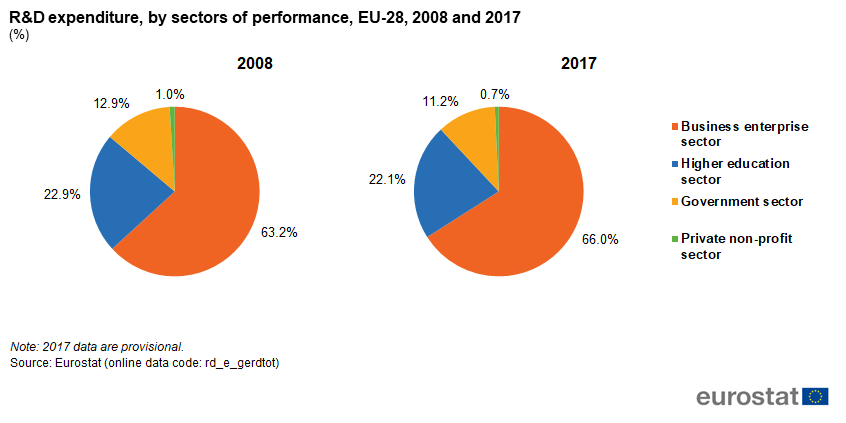 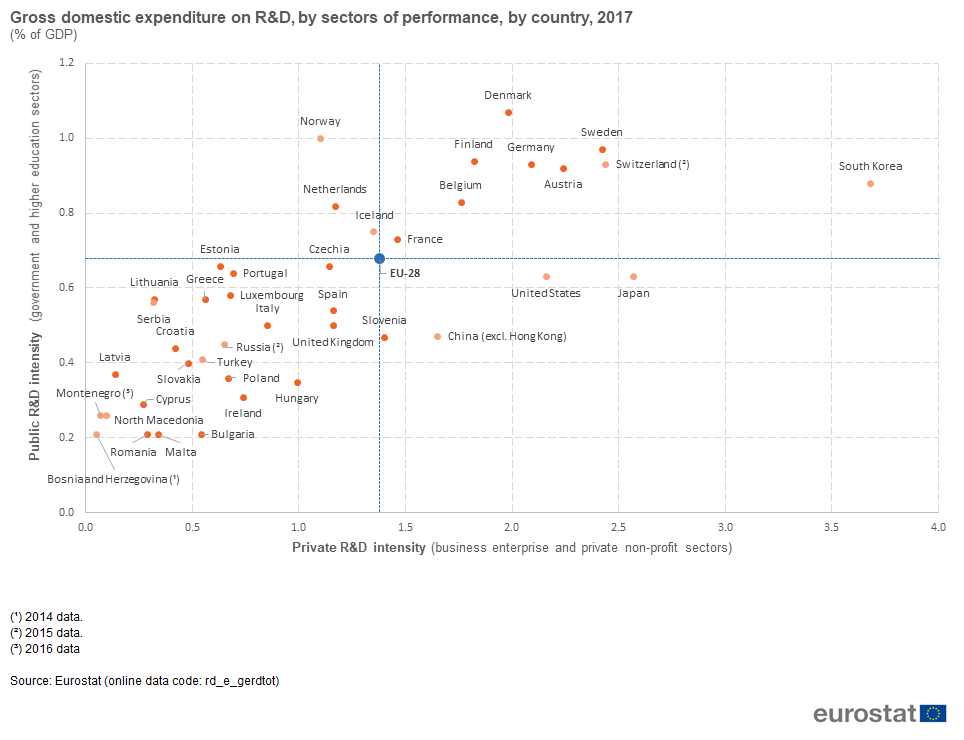 When looking at the regional distribution of R&D intensity, there were 30 NUTS 2 regions that reported R&D intensities above 3.0 % in 2016 (see Map 1). These regions were in Germany (10 regions), Austria and the United Kingdom (five regions each), Sweden (four regions), Belgium (three regions), Denmark, France and Finland (one region each). Some research-intensive ‘clusters’ also become apparent: in particular, a band of research-intensive regions running from Finland through southern Sweden into Denmark and another band from the United Kingdom, through Belgium into southern Germany and Austria. This geographical concentration of R&D activities is a common phenomenon. R&D clusters often develop around academic institutions or specific high-technology industrial activities and knowledge-based services, where they can benefit from a favourable environment and knowledge sharing. Regions in these clusters tend to attract new start-ups and highly qualified personnel and develop a competitive advantage in specialised activities [15].

Three regions in the EU appear to have particularly high R&D intensities. In 2015, the German Braunschweig region spent 10.4 % of its GDP on R&D, almost five times higher than the EU average. In Belgian’s Brabant Wallon province and in Germany’s Stuttgart region, R&D spending reached 6.43 % and 6.17 % of GDP, respectively. In the case of Germany, this could be mainly attributed to the automobile industry concentrated in those regions, and in the case of Belgium to the pharmaceutical industry. 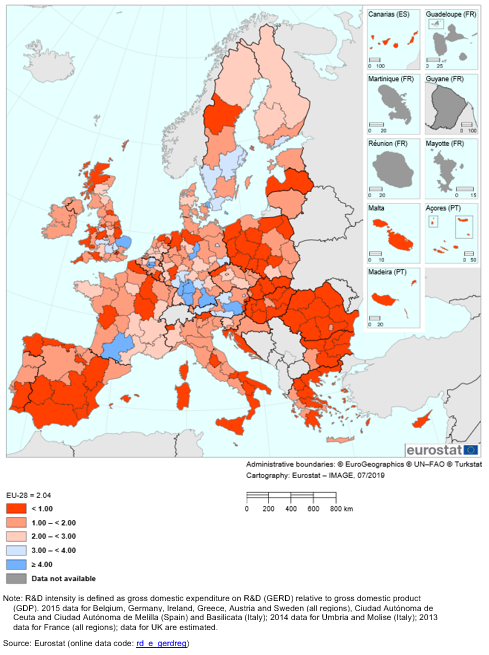 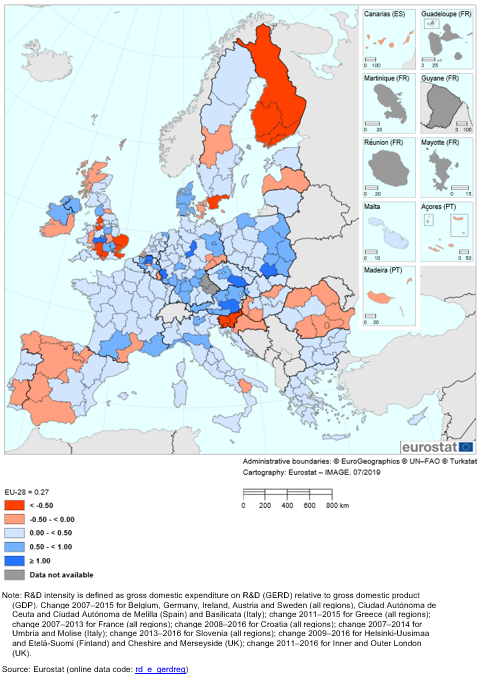 Indicators presented in the article:

R&D and innovation are key policy components of the Europe 2020 strategy and they contribute to a well-functioning knowledge-based economy and industrial competitiveness. Yet, innovative products and services not only add to the strategy’s smart growth goal but also to its inclusiveness and sustainability objectives. Introducing new ideas to the market promotes job creation, labour productivity growth and a more efficient use of resources.

Most importantly, they are central to providing the scientific and technical solutions needed to meet global societal challenges such as climate change and clean energy, security, and active and healthy ageing.

However, new technologies and products alone will not be enough to solve many of the ‘grand’ societal challenges. Fundamental transformations in businesses and manufacturing processes, provision of services, the way society organises itself and other non-technological innovations will be equally important. The challenges facing society also threaten the well-being of the population and can have dire social, economic and environmental implications inside and outside the EU. Research and innovation not only help to address these challenges, but also to exploit the new market opportunities they offer.

A number of important EU policy strategies and initiatives address such win-win situations and help to implement the three main goals for EU research and innovation policy, which can be summarised as Open Innovation, Open Science and Open to the World [16]. Horizon 2020 — the EU’s research and innovation programme for the period 2014 to 2020 — is helping to bring ideas from the lab to the market by providing nearly EUR 80 billion of funding for research projects aimed at tackling societal challenges, generating excellence in science and fostering industrial leadership [17]. The follow-up programme Horizon Europe will continue to promote R&D at the intersection of disciplines, sectors and policies over the period 2021 to 2027, with a proposed budget of EUR 100 billion [18]. In addition, the Investment Plan for Europe through the European Fund for Strategic Investments invests heavily in innovation-related projects and small and medium-sized enterprises (SMEs). The Science, Research and Innovation Performance of the EU (SRIP) reports published by the European Commission every two years analyse the state of R&D innovation in Europe and give recommendations for the future [19]