Planned update of the article: April 2021.

The gender employment gap has shrunken from 15.3 to 11.7 percentage points in the last decade 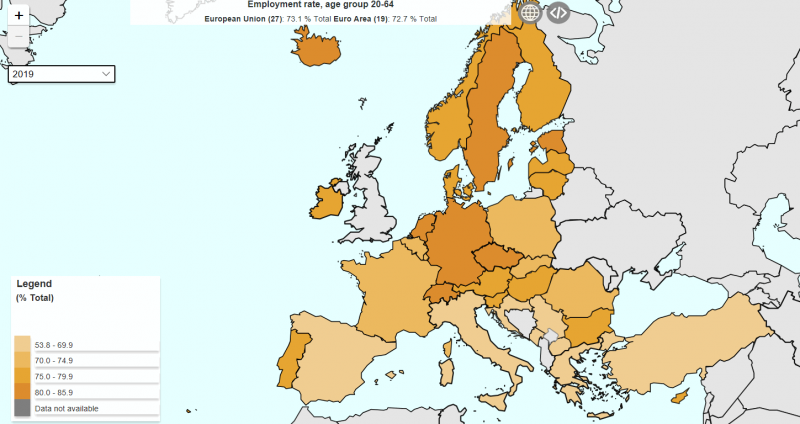 In 2010, the European Council adopted the Europe 2020 strategy [1]. The emphasis was on the reinforcement of the EU economy and on the preparation of challenges for the next decade. With regard to employment, the aim was to increase the employment rate of the population aged 20 to 64 years to at least 75 % by 2020. In addition, the EU Member States set national targets for their employment rate in 2020. The reference data source has been set as the European Union Labour Force Survey (EU-LFS) and the starting reference year as 2008.

This article provides insight in the progression towards the EU and national targets of the Europe 2020 strategy related to the area of employment. Overall, there has been a clear shift in the European labour market since the lauching of the Europe 2020 strategy. In 2019 the EU-27 had the highest employment rate since 2008 and is progressing towards its 75 % EU target. Moreover, almost two thirds of the EU Member States have already reached their national target. The gender employment gap has significantly decreased over the last decade and there has been a notable rise in employment for the female population as well as for the senior population.

Please note that the employment rate gives information on the share of the adult population who have a paid job (in other words, of the employed persons). They can be paid in cash or in kind and the person can have a job as an employee, as a self-employed person or as a family worker. In most cases, a paid job is an important indicator of the living standard of people and the employment rate mainly determines the socio-economic conditions of individuals in a country. Moreover, it provides key macroeconomic information as it describes to what extent human resources of a country are mobilized for economic purposes.

Persistent increase of the employment rate at EU level

As shown on Map 1, there are notable differences in employment rate across EU Member States. In 2019, there was a difference of 20.9 p.p. between the country with the highest and the country with the lowest employment rate; Sweden is at the top end with 82.1 % while Greece is at the bottom end with 61.2 %. Between these two extremes, four major groups of countries can be distinguished: one with employment rates lower than 69.9 %, one with rates ranging from 70.0 to 74.9 %, one with rates within the range of 75.0 to 79.9 % and one with rates of 80.0 % or above. Italy, Croatia and Spain are part of the first group, while the second group consists of Belgium, Romania, France, Luxembourg, Poland and Slovakia. The third group is the biggest one and is made out of Bulgaria, Ireland, Hungary, Cyprus, Portugal, Slovenia, Austria, Malta, Finland, Latvia, Lithuania and Denmark. The last group, with the highest employment rates, contains the remaining EU Member States, i.e. the Netherlands, Estonia, Czechia and Germany. 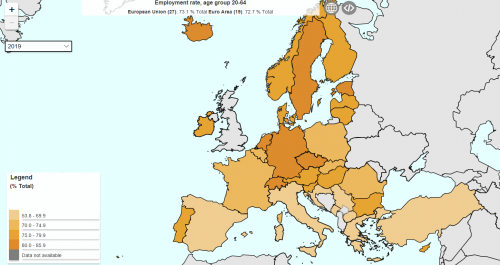 As mentioned before, one of the targets of the Europe 2020 strategy is to have an employment rate of at least 75 % for persons aged 20 to 64 years. This objective has been translated into national targets that reflect the situation and possibilities of each Member State. The national targets vary considerably across countries, ranging from around 63 % in Croatia to 80 % in Denmark, the Netherlands and Sweden (Table 1). 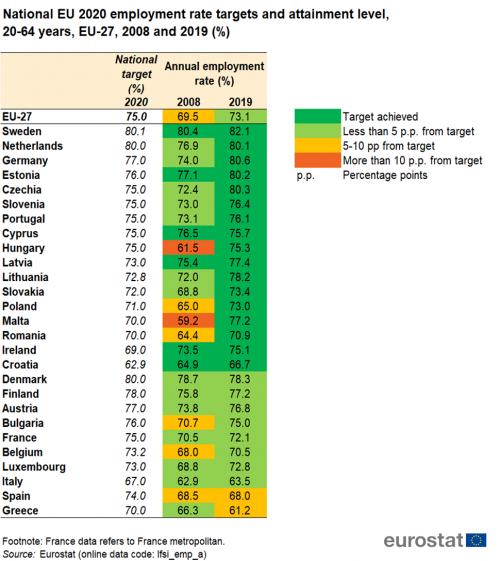 Countries that have already reached their goal nevertheless show different patterns. Sweden, Estonia, Cyprus, Latvia, Ireland and Croatia had already reached their national employment rate target more than a decade ago. The Netherlands, Germany, Czechia, Slovenia, Portugal, Lithuania and Slovakia were less than 5 p.p away from their target while Poland and Romania were between 5 and 10 p.p away from it. Hungary and Malta are the two countries that had to bridge the biggest gap between their starting point in 2008 and their achieved goal in 2019; Hungary has overcome a gap of 13.8 p.p., Malta even bridged a gap of 18.0 p.p. within the same period.

The gender gap in employment, as well as the employment rate of men and women, in each country is shown for 2008 and 2019 in Figure 2. Countries are ranked based on the size of the gender employment gap in 2019. The longer the line, the bigger the gender gap.

For EU-27, the gender employment gap has diminished in 2019 compared with 2008: from 15.3 to 11.7 p.p. This decrease at EU-level is the result of the increase of women's employment rate. During the last decade, the employment rate for men has practically remained unchanged and stabilized.

The Netherlands, Germany, Estonia, Sweden, Latvia, Finland and Lithuania are the only Member States that have fulfilled the EU employment rate target for both men and women in 2019 (75 %). In contrast, Greece, Italy, Spain, Croatia and Belgium have not achieved that goal, neither for men nor for women.

Overall, the decreasing gender gaps in employment across countries can consequently be explained by the following two factors: (i) in one half of the EU Member States, this is due to the growing employment rate of both men and women, with a faster increase among women than among men, and (ii) in the other half of the countries, this is due to decreasing employment rates among men, with at the same time increasing rates among women.

... and more people with high education level in employment

Narrower gap between men and women with high education level

Source: The European Union Labour Force Survey (EU-LFS) is the largest European household sample survey providing quarterly and annual results on labour participation of people aged 15 and over as well as on persons outside the labour force. It covers residents in private households. Conscripts in military or community service are not included in the results.

Definitions: The concepts and definitions used in the survey follow the guidelines of the International Labour Organisation. Employment covers persons aged 15 years and over (16 and over in Spain and Italy, 15-74 years in Estonia, Latvia, Hungary, Finland, Sweden, Norway and Denmark, and 16-74 years in Iceland), living in private households, who during the reference week performed work, even for just one hour, for pay, profit or family gain, or were not at work but had a job or business from which they were temporarily absent, for example because of illness, holidays, industrial dispute or education and training.

The EU-LFS is based on the same target populations and uses the same definitions in all countries, which means that the results are comparable between the countries.

Please note that Eurostat provides two sets of indicators linked to the annual employment rate, which serve different purposes and which in some cases differ from each other:

1) The main indicators, which are seasonally adjusted. They include the headline indicators under the EU2020 Strategy and are consequently used for monitoring the EU 2020 targets (at EU and national levels). They have only a few breakdowns and normally refer to the age group 20-64. Please note that for France, two series are published: one including overseas departments starting in 2003, and one for metropolitan France, excluding overseas departments, starting in 1992. The latter is evaluated in the EU2020 strategy, and also included in the relevant EU and EA aggregates.

2) The detailed results, which are not seasonally adjusted. They have a large number of breakdowns and can therefore be used for more detailed analysis. For France, only one data series is published. This series contains data for metropolitan France until the fourth quarter of 2013, and from 2014 on, also the French overseas departments.

This article presents annual results for some indicators from the "main indicators" set.

Employment statistics are at the heart of many EU policies. The European employment strategy (EES) was launched at the Luxembourg jobs summit in November 1997 and was revamped in 2005 to align the EU’s employment strategy more closely to a set of revised Lisbon objectives, and in July 2008, employment policy guidelines for the period 2008–2010 were updated. In March 2010, the European Commission launched the Europe 2020 strategy for smart, sustainable and inclusive growth; this was formally adopted by the European Council in June 2010. The European Council agreed on five headline targets, the first being to raise the employment rate for women and men aged 20 to 64 years old to 75 % by 2020. EU Member States may set their own national targets in the light of these headline targets and draw up national reform programmes that include the actions they aim to undertake in order to implement the strategy. In line with the Europe 2020 strategy, the EES encourages measures to help meet three headline targets by 2020, namely, for:

More recently, the European Pillar of Social Rights has been jointly signed by the European Parliament, the Council and the Commission on 17 November 2017. Employment and social policies are the main fields of interest of the European Pillar of Social Rights, which is about delivering new and more effective rights for citizens. It has 3 main categories: (1) Equal opportunities and access to the labour market, (2) Fair working conditions and (3) Social protection and inclusion. In particular, today's more flexible working arrangements provide new job opportunities especially for the young but can potentially give rise to new precariousness and inequalities. Building a fairer Europe and strengthening its social dimension is a key priority for the Commission. The European Pillar of Social Rights is accompanied by a ‘social scoreboard’ which will monitor the implementation of the Pillar by tracking trends and performances across EU countries in 12 areas and will feed into the European Semester of economic policy coordination. The scoreboard will also serve to assess progress towards a social ‘triple A’ for the EU as a whole.