Crude oil largely dominated the EU imports in energy products in 2019 with a share of 73% , followed by natural gas with 15%.

In 2019, Russia remained the largest supplier of natural gas and petroleum oils to the EU, ahead of Norway. 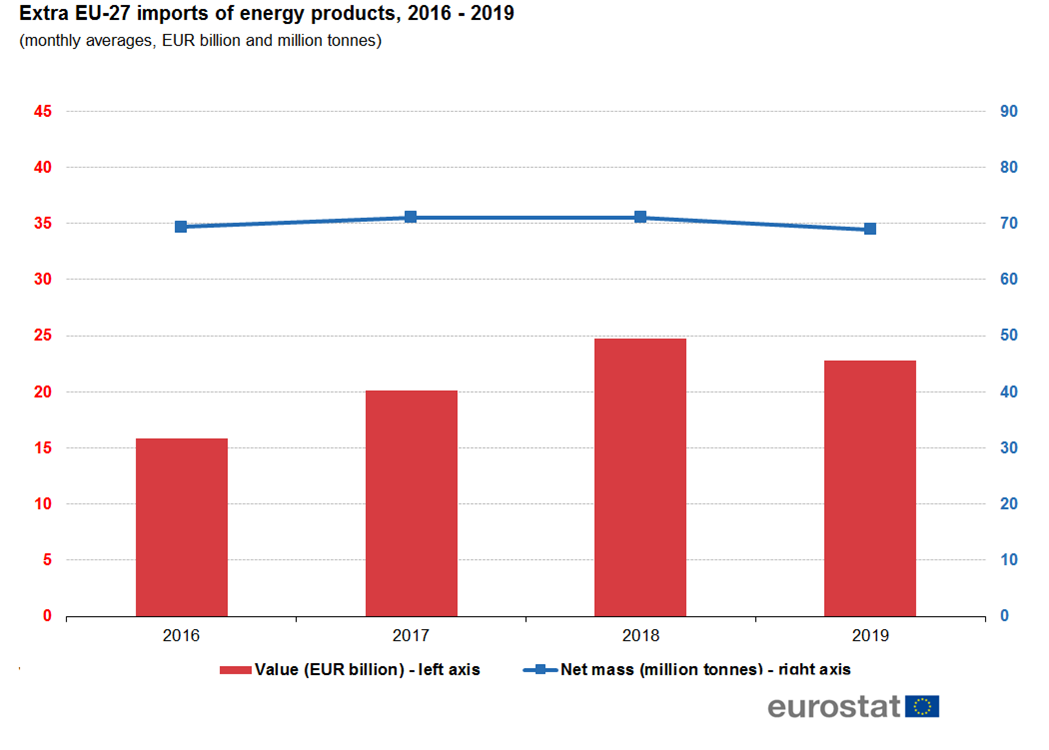 This article provides a picture of trade in energy products between the European Union (EU) and the rest of the world (extra-EU trade), and between the Member States (intra-EU trade). Special focus is given to Russia as the main supplier of petroleum oils and natural gas to the EU. Coal, lignite, peat and coke are the other key energy products considered hereafter.

Annual data from 2016 to 2019 are included, thus reflecting the most recent developments. Priority was given to trade in value (expressed in millions of euros) and net mass (weight without packaging expressed in tonnes). Supplementary information like trade in terajoules for natural gas can be found in Eurostat databases. 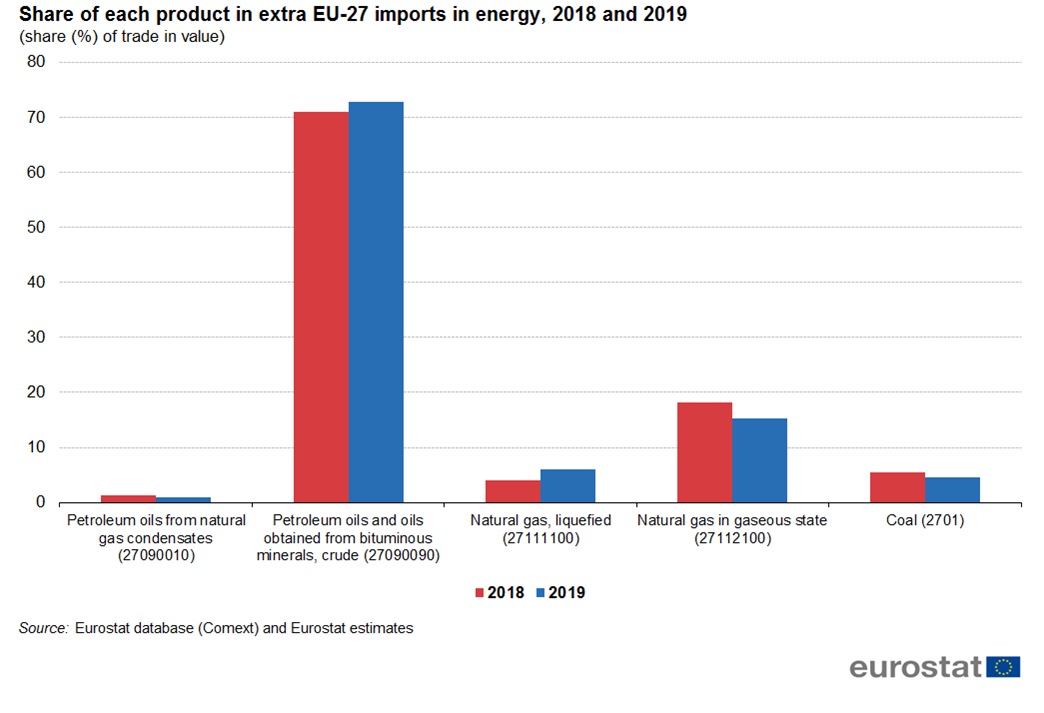 Russia was the largest supplier of natural gas to the EU, both in 2018 and 2019 (Figure 3 and Map 1); the only other partners with a significant share in total extra EU-27 imports were Norway and, at some distance Algeria, Qatar and Nigeria. The global share of all the other countries exporting natural gas to the EU was 4.7 % in 2018 and 9.2 % in 2019 in terms of trade value. 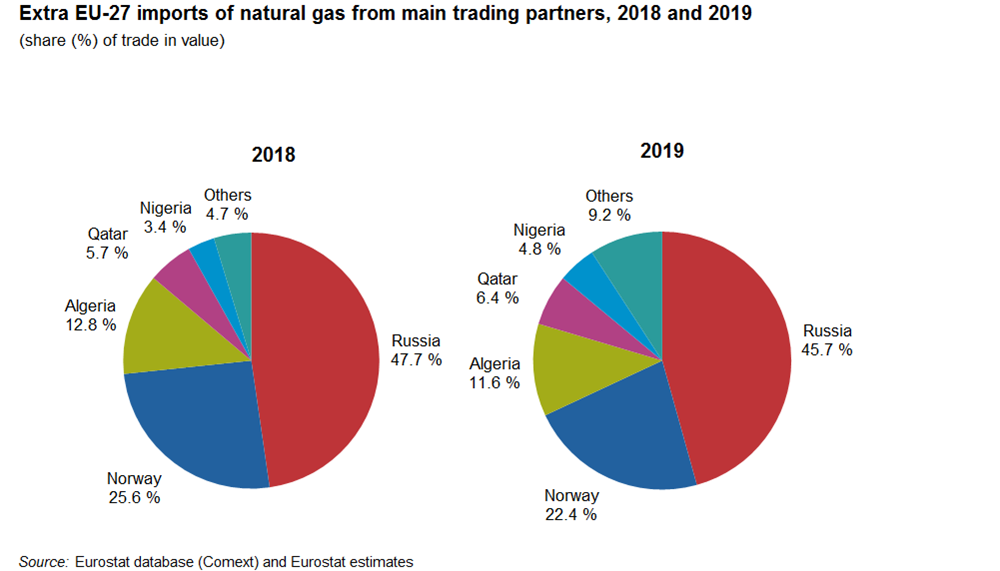 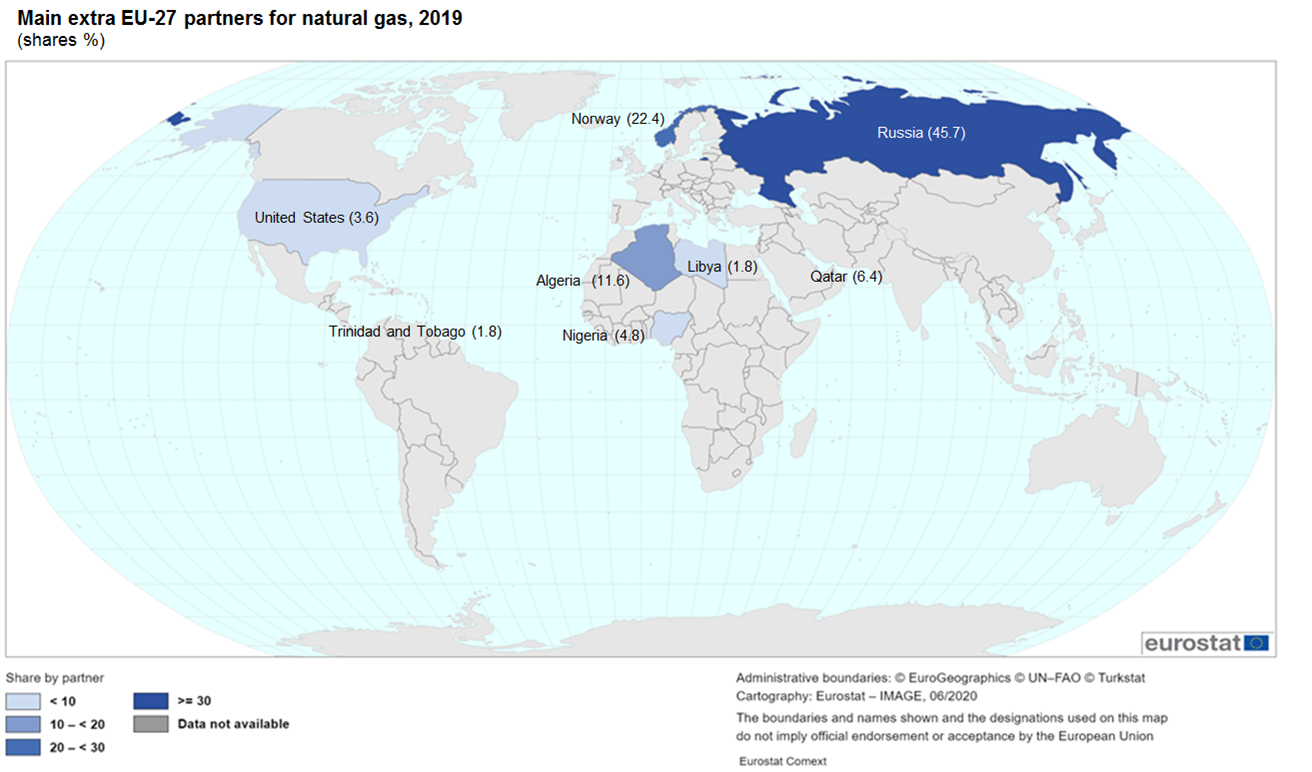 As can be seen in Figure 4 and Map 2, Russia was less dominant in petroleum oils than in natural gas but still far ahead of the second largest supplier, Nigeria. They were followed by Iraq, Kazakhstan, Norway and the United States. The share of the top six fell from 67.0 % in 2018 to 66.0 % in 2019. 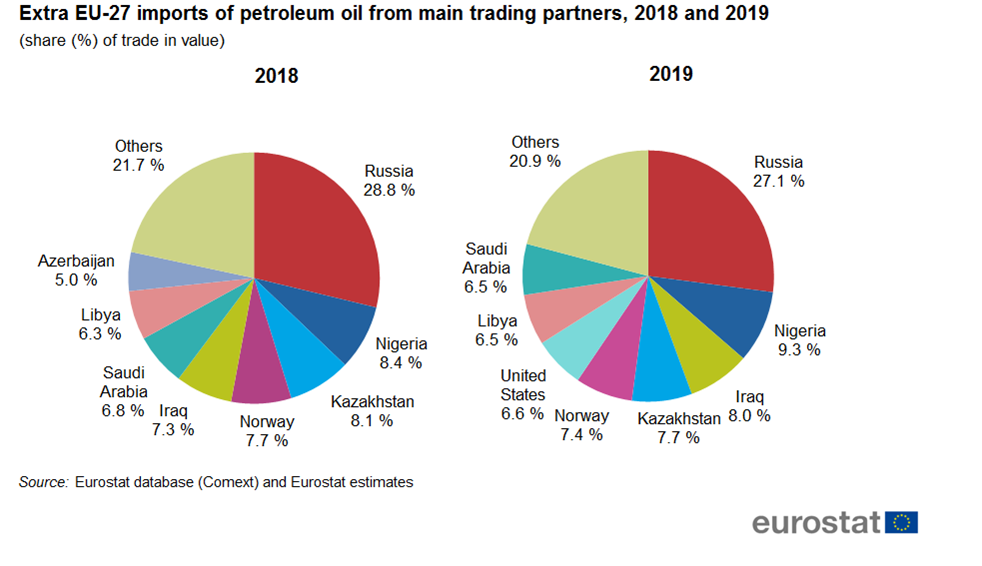 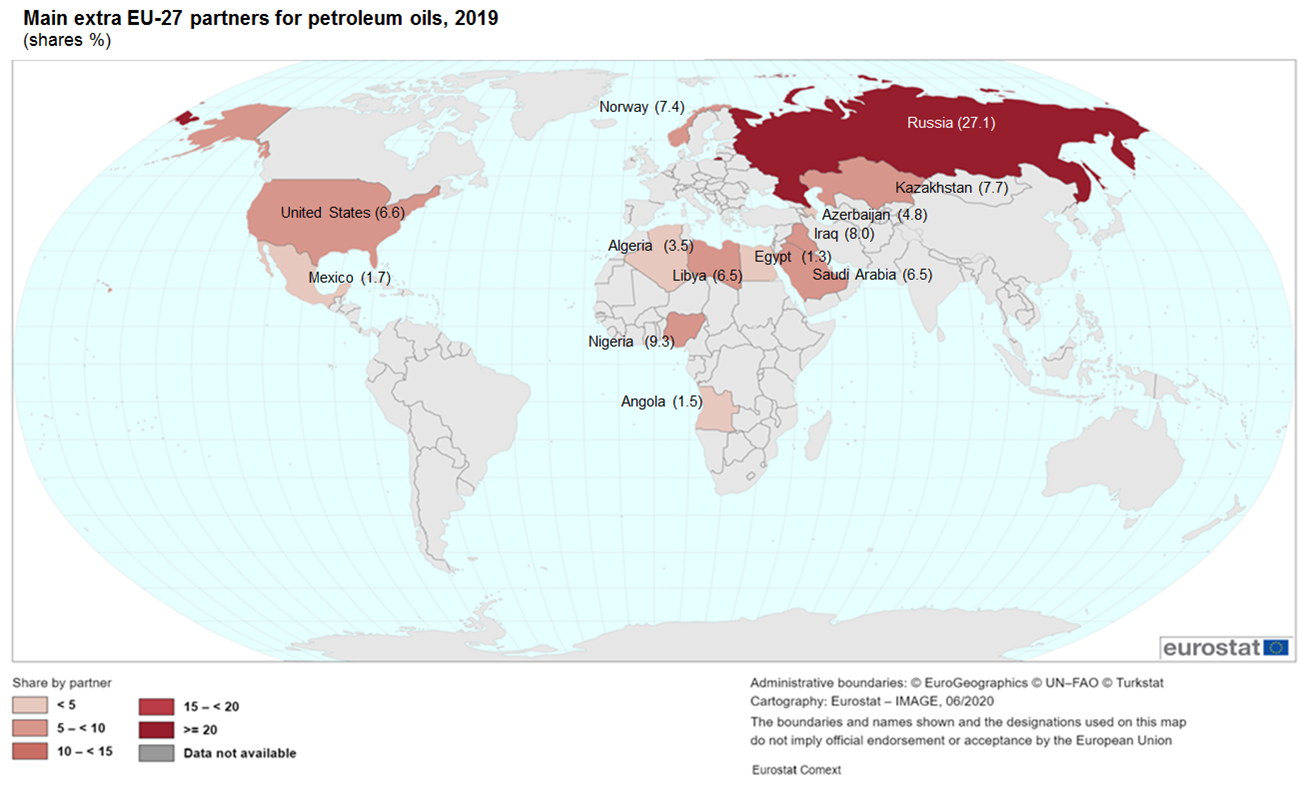 The detailed tables for main importers of petroleum oils and natural gas are available here. 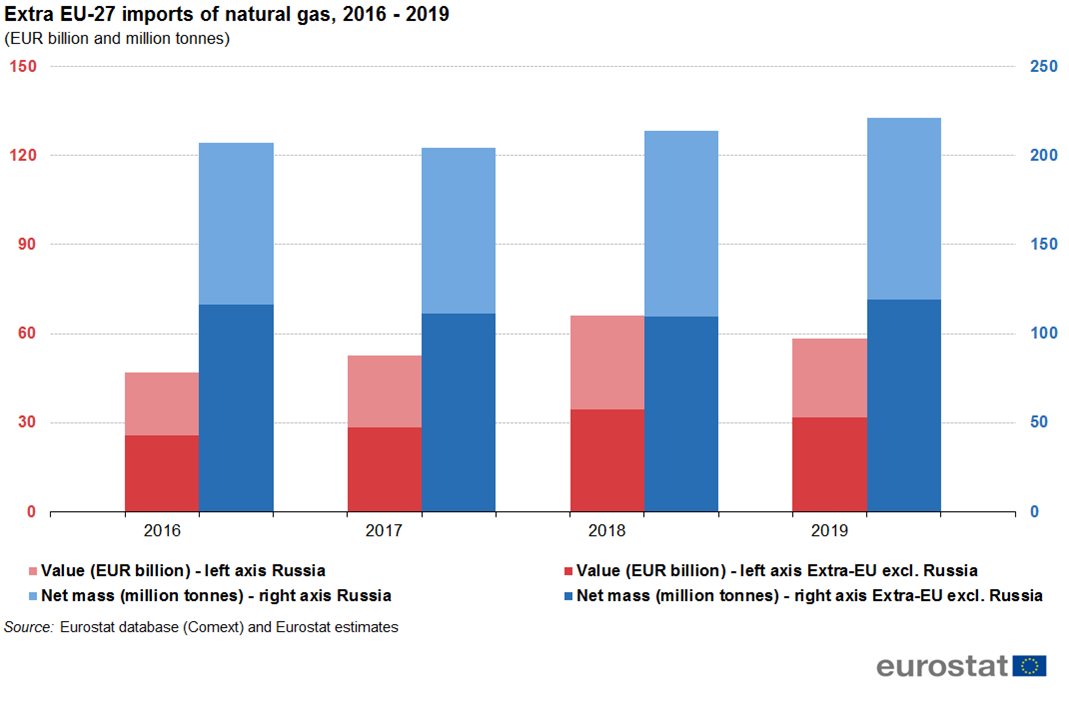 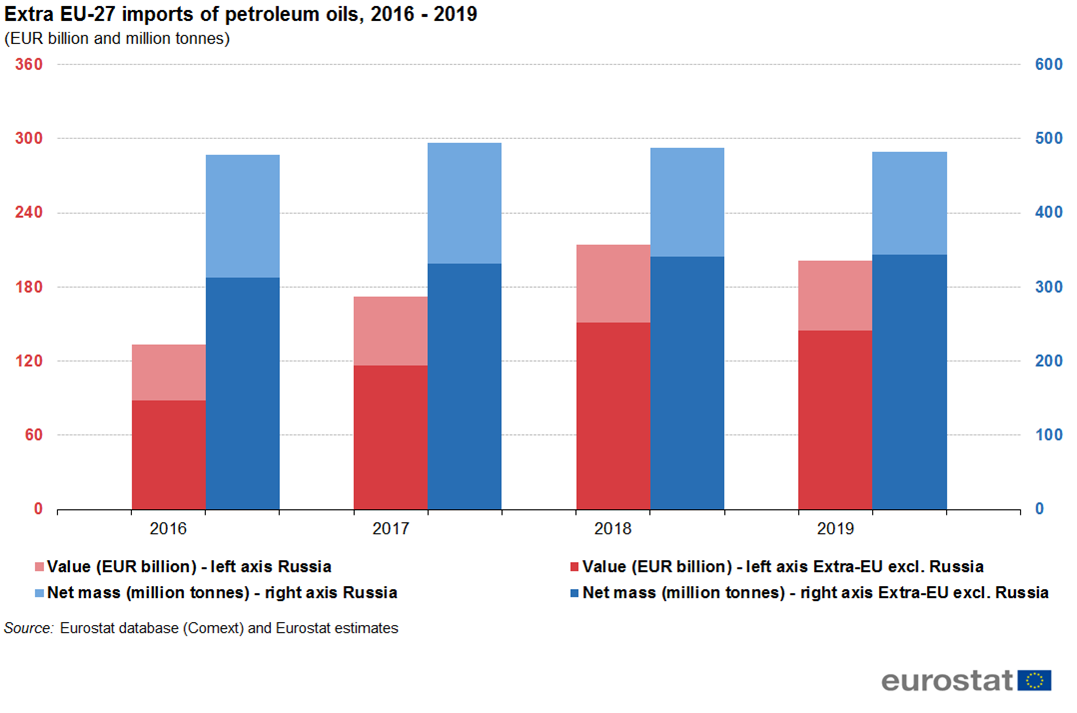 Figure 7 shows the share in total EU imports of the key energy products considered in this article. This share was 11.9 % in 2016, rising to 15.6 % in 2018 before dropping to 14.1 % in 2019.The lion's share of imports of energy products comes from petroleum oils whose share is three times as much as for natural gas and more than ten times as much as for solid fuels in 2019. 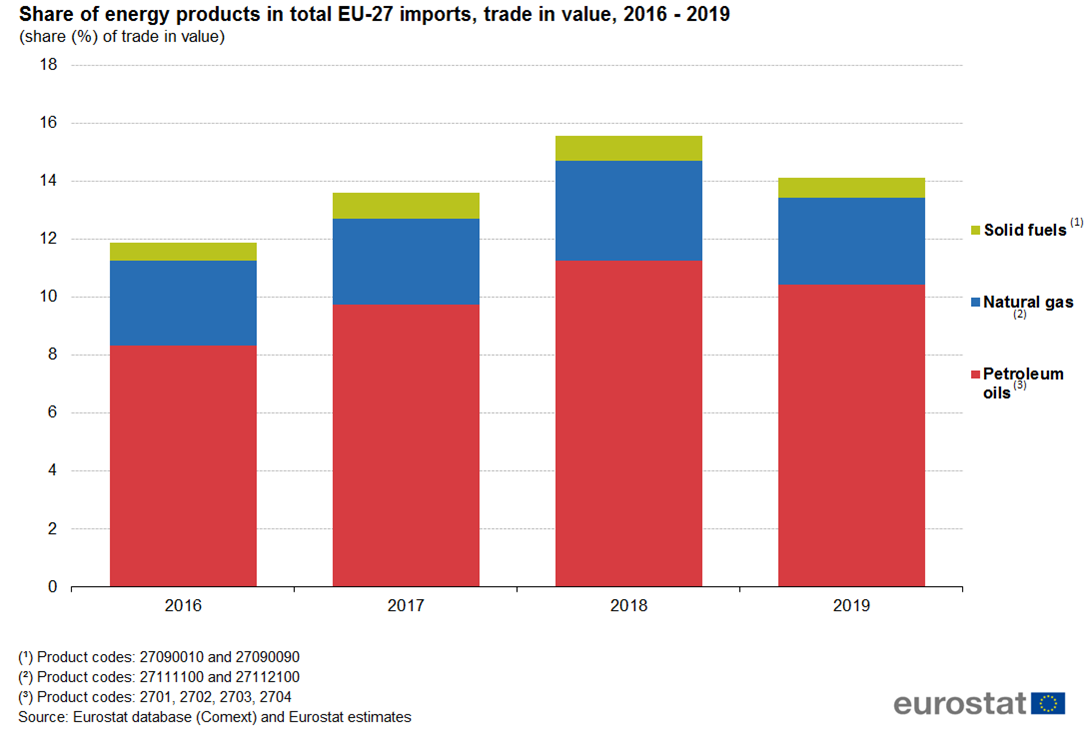 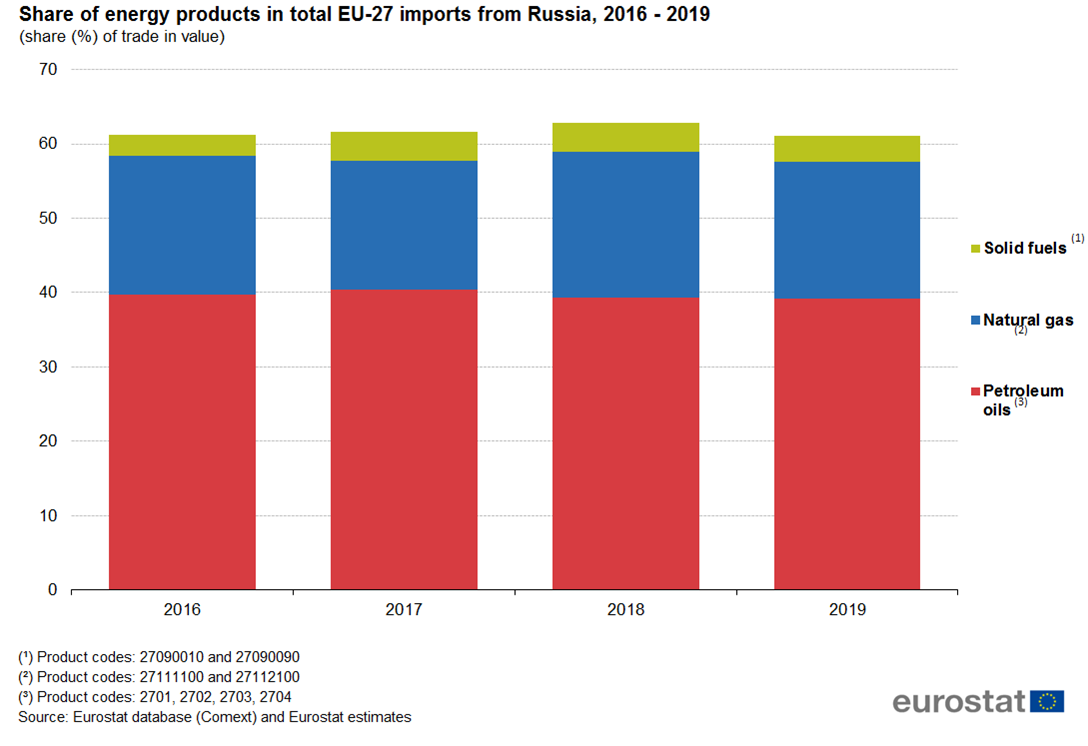 Energy imports to the EU from Russia as a share of total imports dropped only 0.2 percentage points from 61.3 % in 2016 to 61.1 % in 2019 (see Figure 9). In this period the share for petroleum oils and natural gas fell slightly while the share for solid fuels increased by 0.6 percentage point. 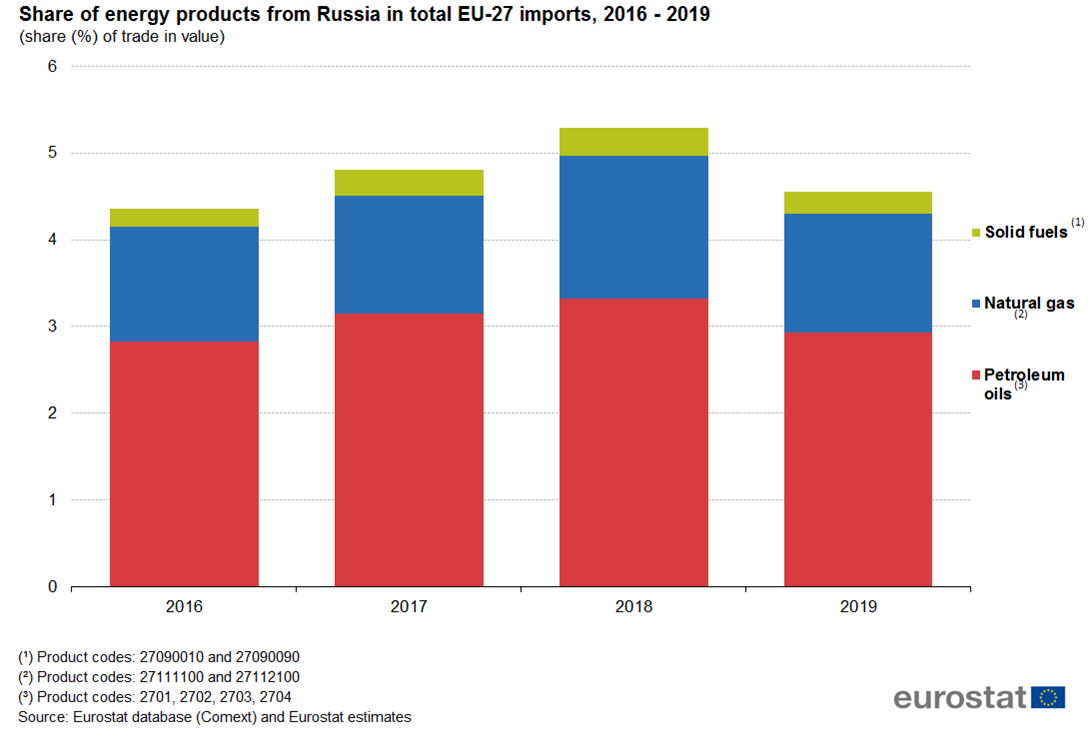 The detailed tables for extra EU-27 and Russian shares of energy imports in total imports are available here. 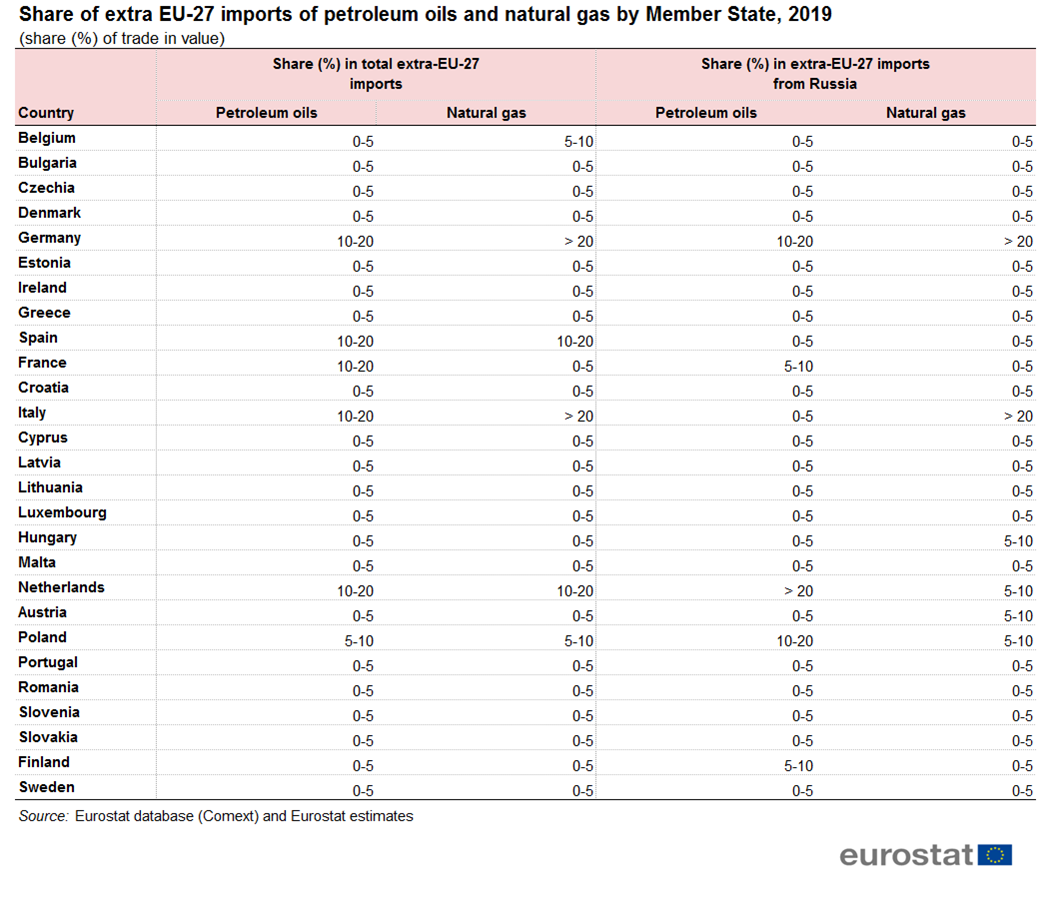 All Member States imported petroleum oils and natural gas in 2019. In three Member States (Estonia, Slovakia and Finland), more than 75 % of their imports in petroleum oils came from Russia (Table 2). Eleven Member States (Bulgaria, Czechia, Estonia, Latvia, Hungary, Austria, Poland, Romania, Slovenia, Slovakia and Finland) imported more than 75 % of their natural gas imports from Russia. In both cases, these are predominantly countries that are in close proximity to Russia. Most of the countries with shares below 25 % of imports from Russia in either product are further away from Russia. 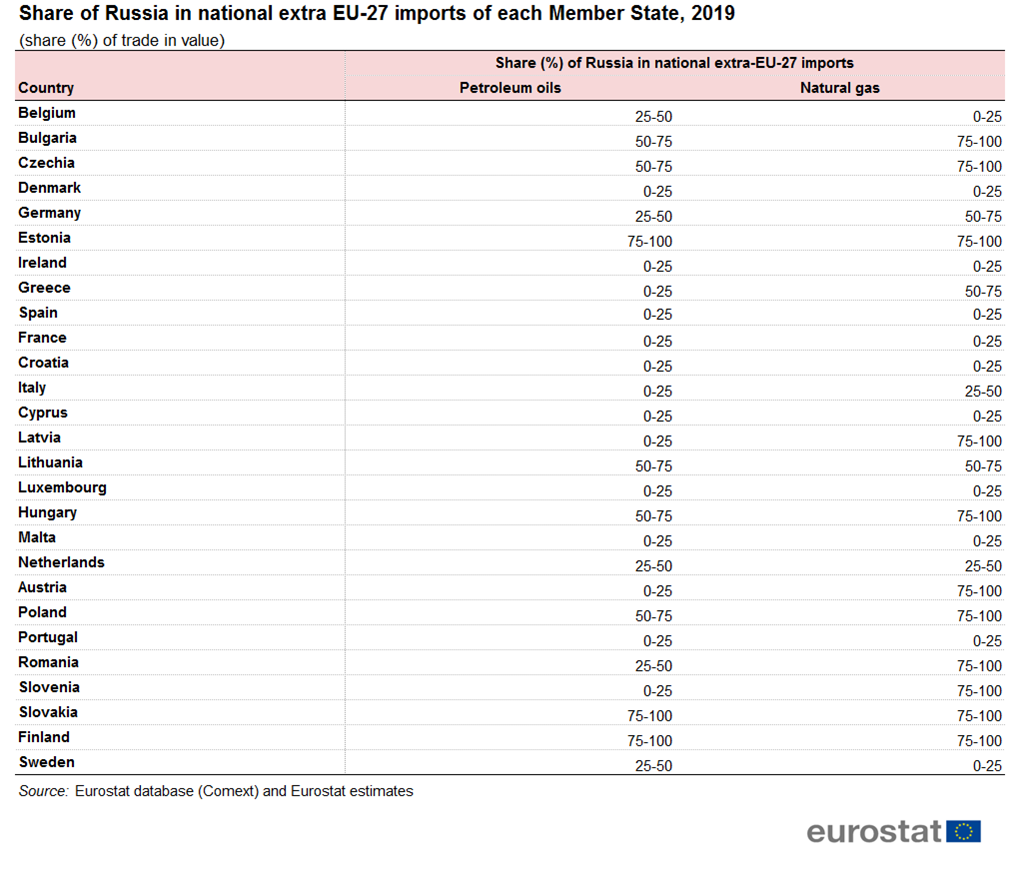 By combining tables 1 and 2 we are able to check the dependency on Russia for the largest importers of petroleum oils and natural gas in the EU. For petroleum oils, the largest importers from the extra EU-27 were Germany, Spain, France, Italy and the Netherlands (all between 10 % and 20 %). Of those, the share of Russia in national imports was less than 25 % for Spain, France and Italy and between 25 % and 50 % for the Netherlands and Germany. 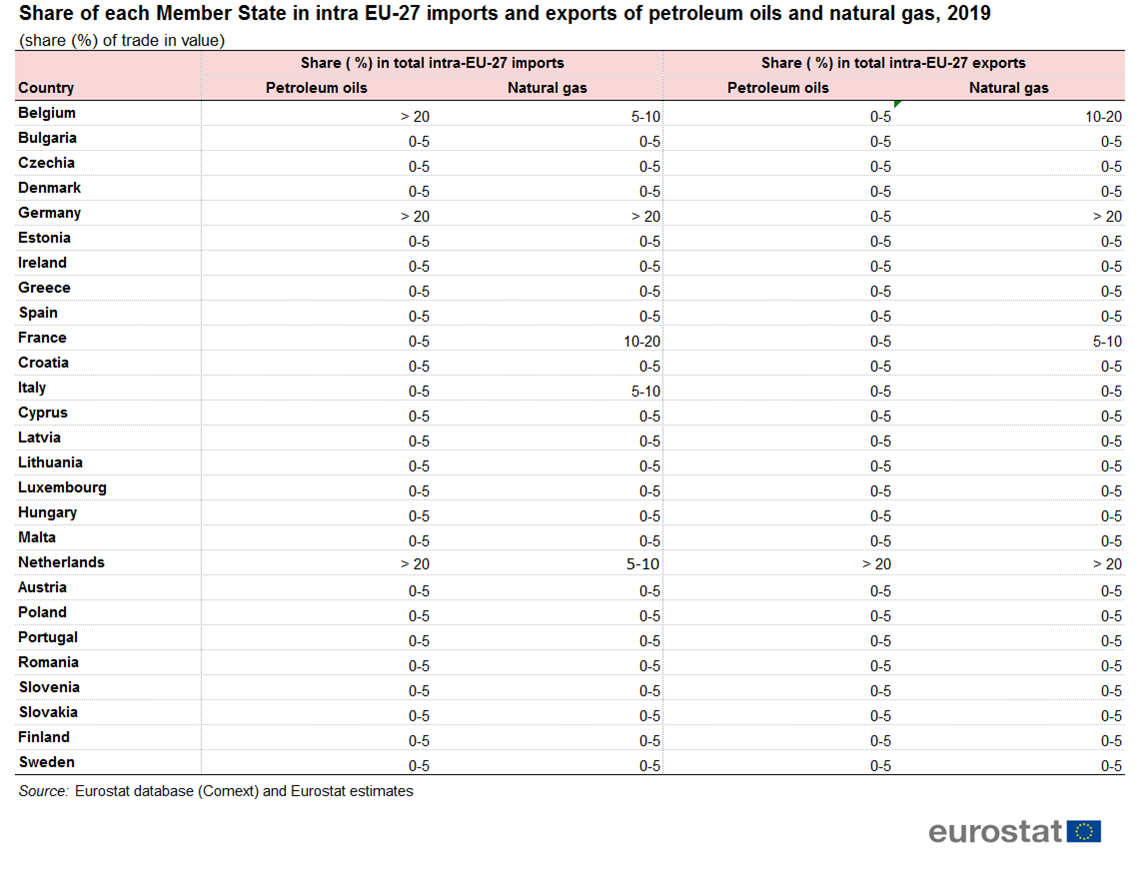 Table 3: Share of each Member State in intra EU-27 imports and exports of petroleum oils and natural gas, 2019
(share (%) of trade in value)

Energy products This article analyses the EU imports of the following energy products, as classified according to the Combined Nomenclature (CN):