Data extracted in October and November 2016

No update is planned for this article 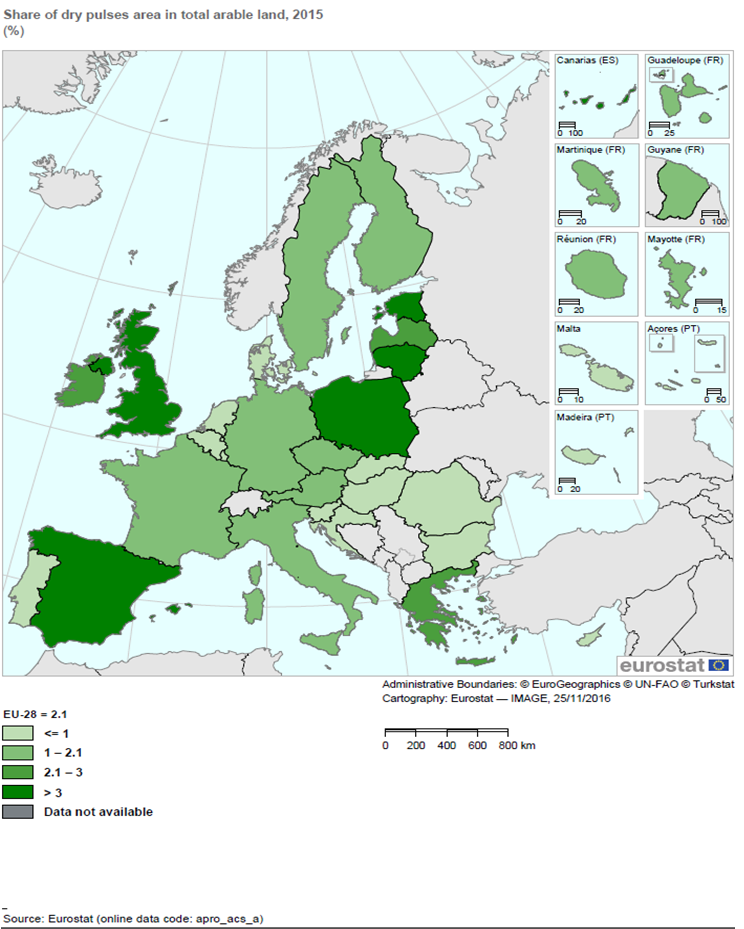 This article offers a statistical overview of the dry pulses sector in EU agriculture, and presents data on cultivated areas, harvested production, farms and the economic value of the sector. 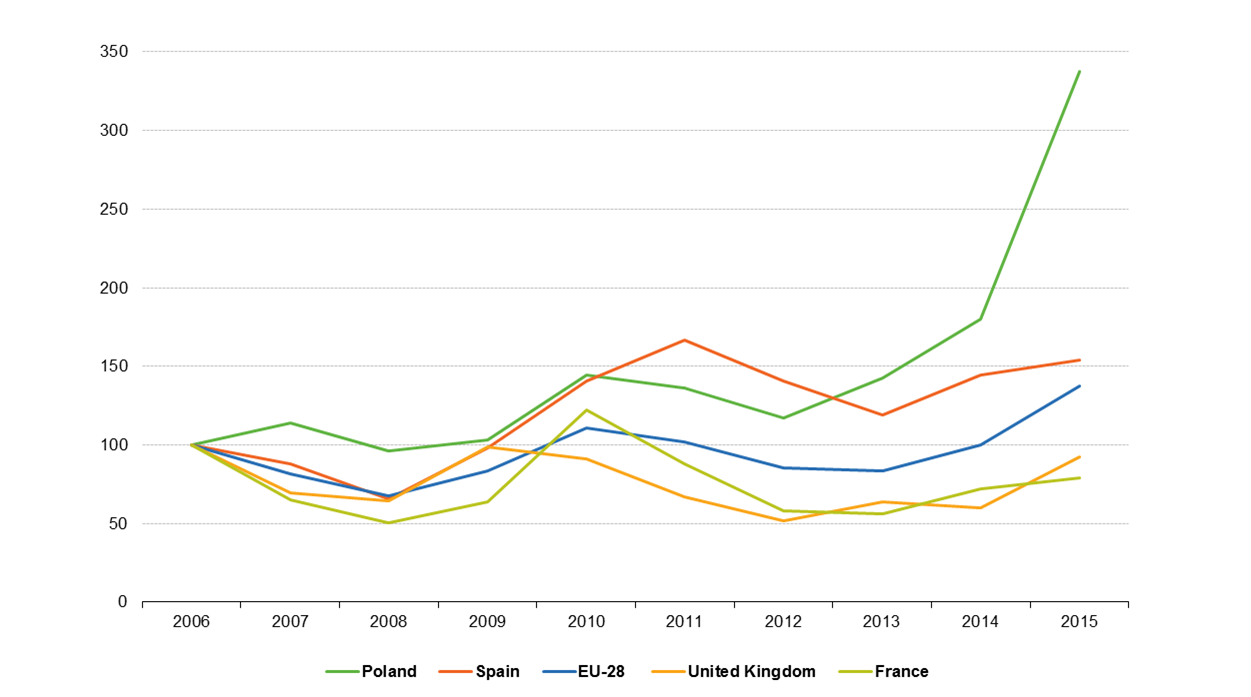 This is largely a result of the new Common agricultural policy (CAP) greening measures. The new CAP introduced the green direct payment scheme, which began to be implemented in 2015. In particular, nitrogen-fixing crops (such as dry pulses) are one of the options available for implementing the ecological focus areas [1]. In addition, 16 Member States decided to support the protein crop sector within the voluntary coupled support framework. In 2015, those Member States allocated a total of EUR 443 million to the protein crop sector, which was 11 % of the total voluntary coupled support ceiling fixed by the Commission. Farmers have responded to these measures by sowing larger areas with dry pulses.

Dry pulses are grown on 2.1 % of European arable land, and this has increased over the last three years

Dry pulses are cultivated in almost all EU Member States; the largest area (22.5 %) is in Spain

Dry pulses are grown in all Member States except Malta. However, there are some differences at individual Member State level: Lithuania registered the highest share of arable land dedicated to dry pulses (7.3 %), while in Belgium and Croatia that share was only 0.3 % (Map 1). 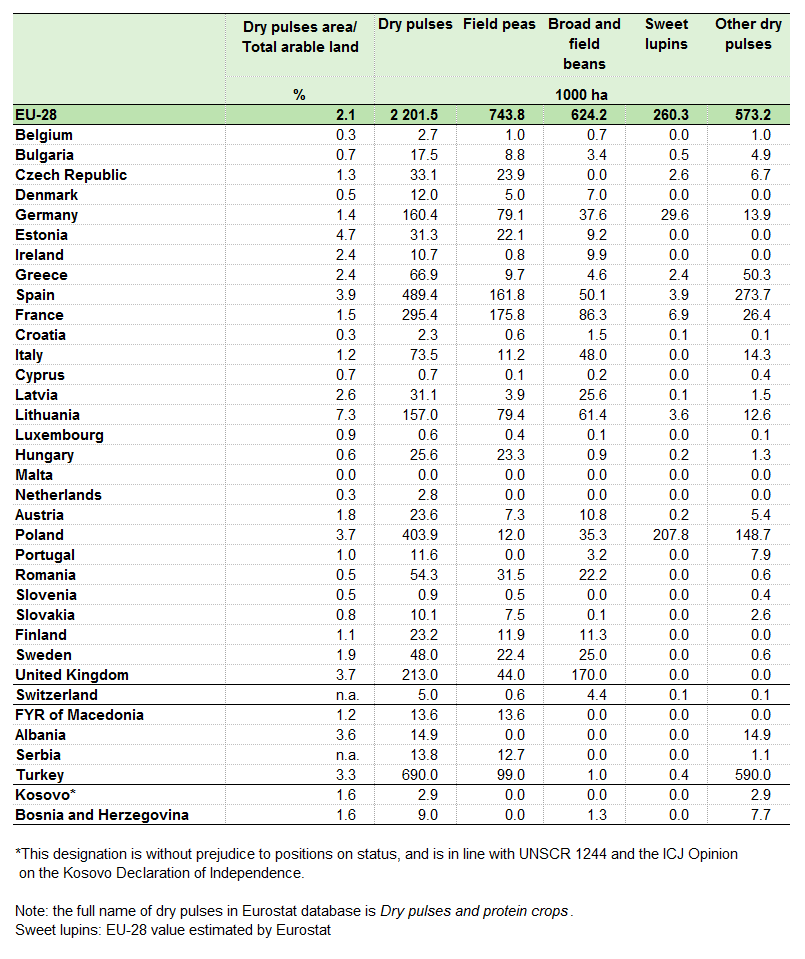 Field peas, broad and field beans are the leading pulses

Spain and France dominate the cultivation of field peas in the EU; the UK has the largest area for broad and field beans

Different Member States led the production of each single dry pulse crop. France was the leader in cultivating field peas, with a share of 23.6 %, Spain came second with 21.7 %, followed by Lithuania (10.7 %) and Germany (10.6 %).

Sweet lupins were prevalent in Poland and were cultivated on more than half (51.4 %) of the dry pulse area. 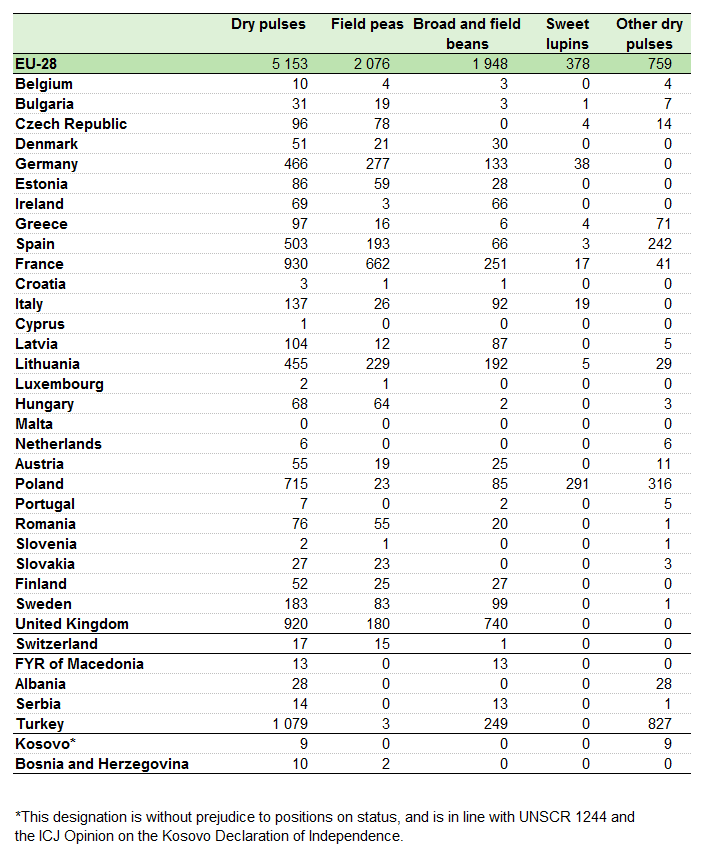 France and the United Kingdom are the largest producers

The fact that Member States rank differently for cultivation area and production is due mainly to France and the United Kingdom specialising in the more productive dry pulse crops (field peas and field and broad beans), while Spain cultivates large areas of the heterogeneous group of ‘other dry pulses’. In addition, the farms in both France and the United Kingdom that cultivate dry pulses are larger and are more likely to take advantage of scale economies.

According to the most recent farm structure survey (2013), 346 000 holdings in the EU cultivated dry pulses, which represented 3.2 % of all EU holdings. Four in five of these holdings (80.3 %) also cultivated cereals, probably for crop rotation. However, dry pulses were present on a 5.1 % share of holdings with cereals.

Production of dry pulses is intensive: larger farms (over 10 ha of arable land) cultivated 91.4 % of the EU dry pulses area, although they represent only 36.7 % of all farms with area under dry pulses (Figs. 3 and 4). 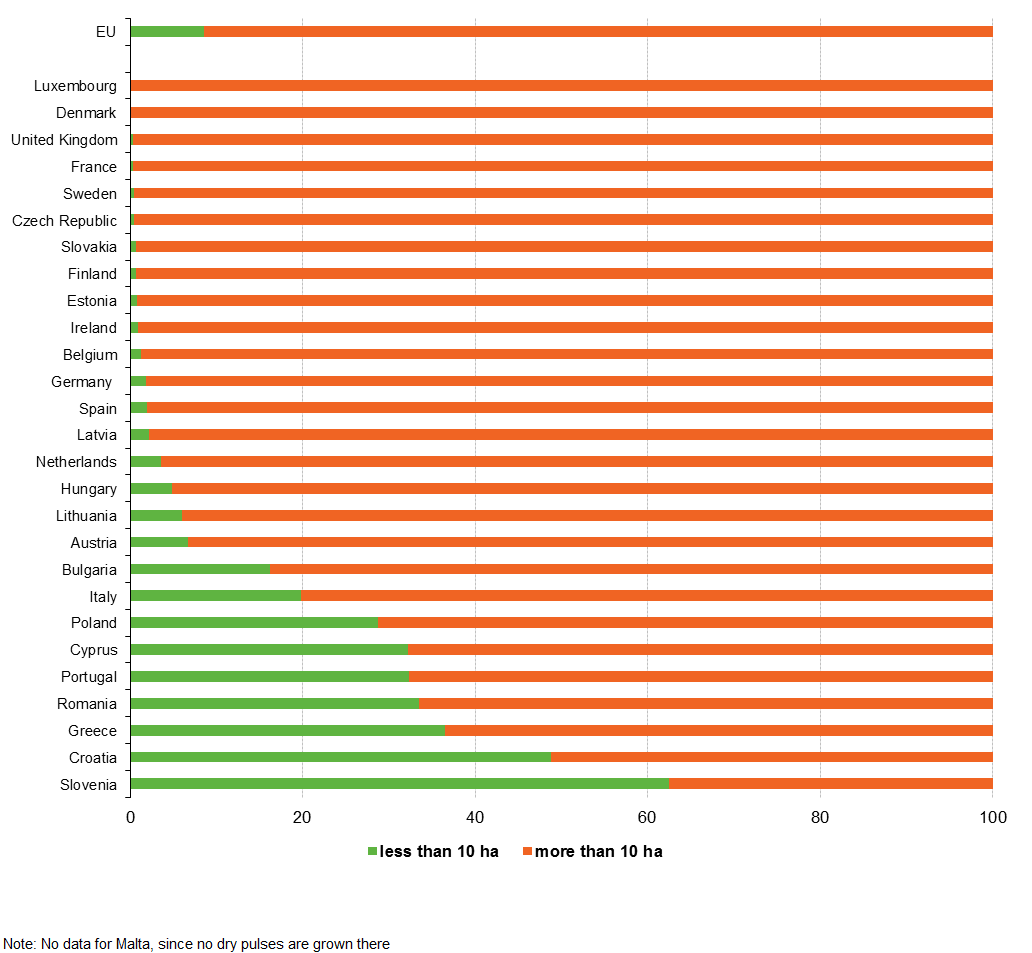 Figure 3: Share of dry pulses area by farm size, 2013
(% of total arable land)
No data for Malta, since no dry pulse is grown in there
Source: Eurostat (ef_alvege) 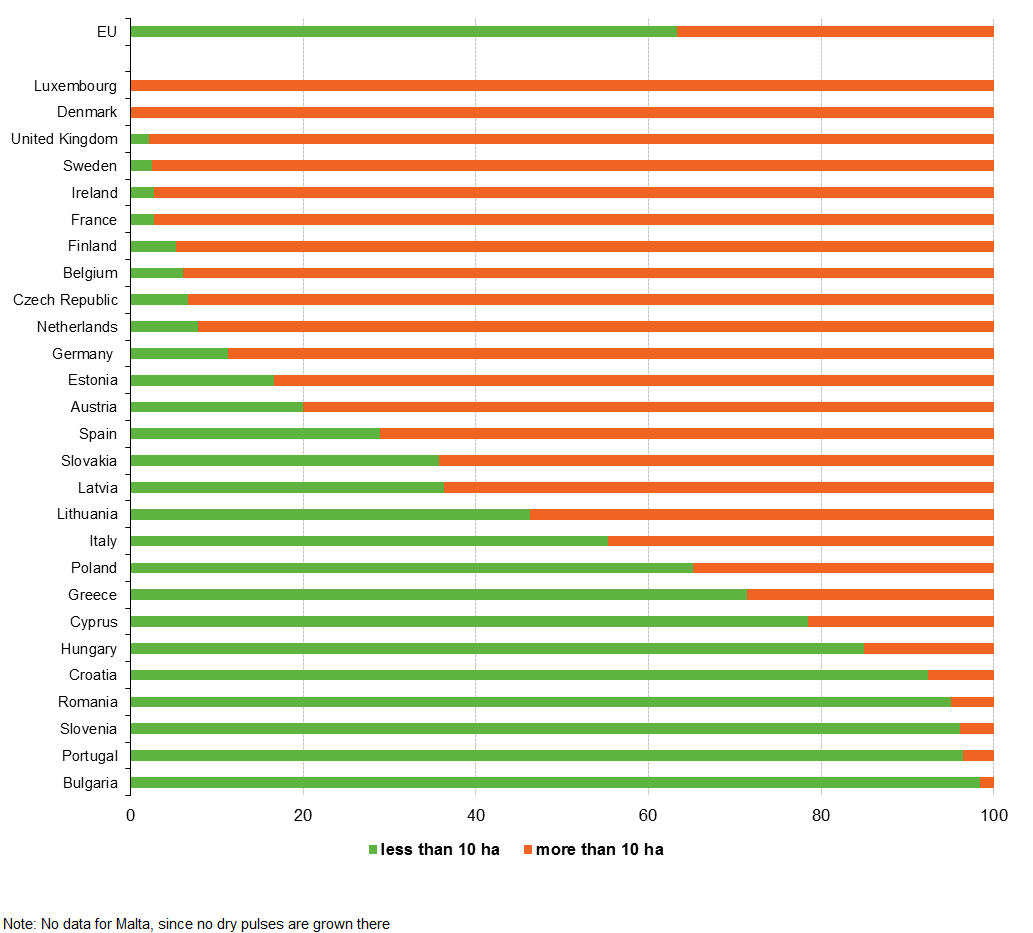 Figure 4: Share of total number of farms cultivating dry pulses by farm size, 2013
(% of farm holdings)
No data for Malta, since no dry pulse is grown in there
Source: Eurostat (ef_alvege)

The main producing Member States recorded higher shares both for the number of farms and for area. In the United Kingdom and France virtually all the dry pulses area (respectively 99.7 % and 99.6 %) was located in farms with 10 ha or more of arable land, which were respectively 97.9 % and 97.2 % of all dry pulses farms. The only exception was Poland where both shares were lower than the EU level (34.9 % for farms and 71.3 % for area).

Half of the output value for dry pulses was created by Poland, France and the United Kingdom 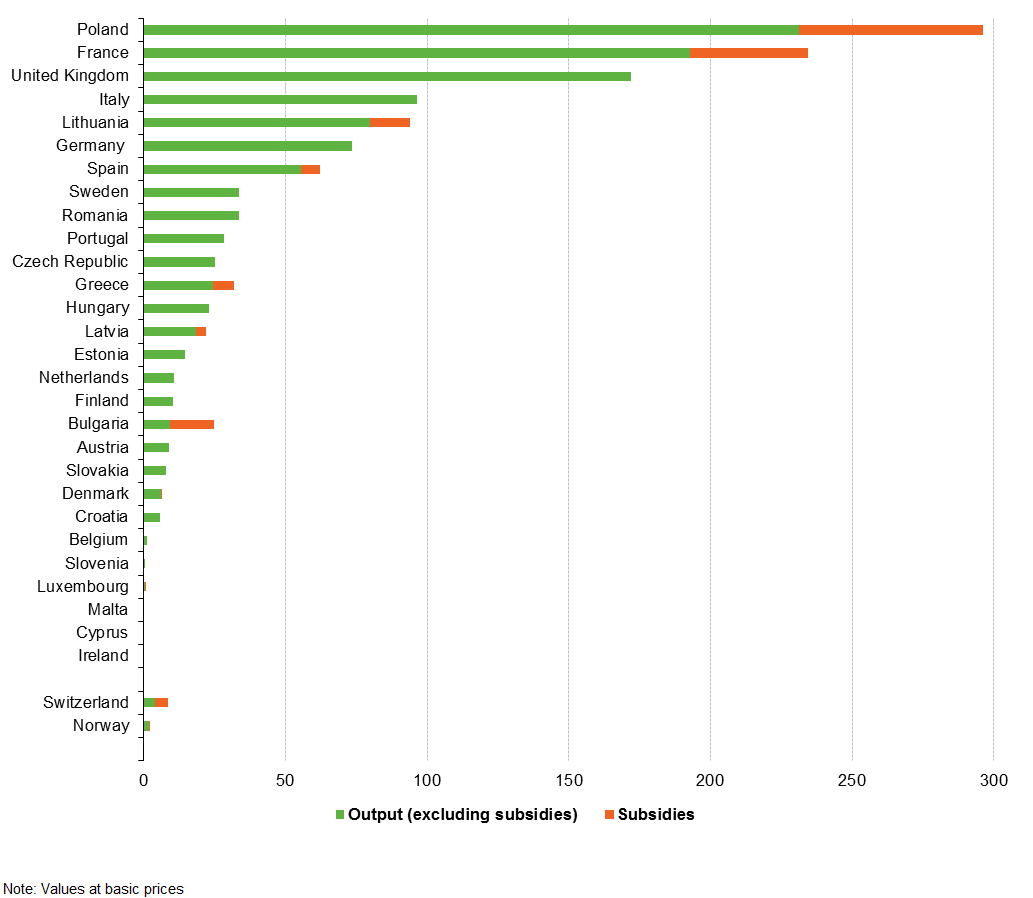 In 2015, EUR 154 million in subsidies was provided to dry pulses at EU-28 level. This was 11.7 % of the output value of dry pulses at basic prices. In 2014 and 2013, subsidies to dry pulses were far lower than that amount: respectively EUR 90.7 and EUR 85.2 million. The subsidies to the dry pulses sector were registered in just nine Member States: among those Poland recorded the highest value (EUR 64.9 million), while France came second with EUR 41.5 million.

Dry pulses are edible seeds (dry grains) of annual plants in the leguminous family; they grow in pods each having between one and twelve grains, and have a variety of shapes, sizes and colours. Most common are peas and beans.

Dry pulses are key crops because of their high protein content and ability to fix atmospheric nitrogen in the soil. This means that dry pulses are a good source of protein both for livestock (fodder) and humans. Secondly, cultivating dry pulses increases the nitrogen level in the soil.

The 68th UN General Assembly declared 2016 the International Year of Pulses. The aim was to raise public awareness of the nutritional benefits of pulses and of their importance in sustainable food production. The Food and Agriculture Organization of the United Nations (FAO) focuses on 11 types of pulses[6] which are cultivated all around the world in different pedo-climatical conditions and agricultural systems. In Europe the most common are field peas, field and broad beans and sweet lupins harvested after the stage of lactic ripeness. Those crops are mainly cultivated for fodder.

The recently-reformed EU common agricultural policy (CAP)[7] aims at providing consumers with a stable, sustainably-produced supply of safe and quality food at affordable prices while preserving the natural resources necessary for agricultural productivity. Among other measures, the new CAP for 2014-2020 introduced the green direct payment scheme, a new policy instrument to enhance the sustainability of agriculture in the European Union. There are several ways in which farmers can be eligible for the new compulsory green direct payment scheme, and one is by cultivating nitrogen-fixing crops. Those crops, which include dry pulses, protect the soil from erosion and improve soil organic matter.