This Statistics Explained article is outdated and has been archived - for recent articles on Labour market see here.

Data from October 2013. Most recent data: Further Eurostat information, Main tables and Database. Planned article update: since January 2014 the responsibility within the European Commission for the labour market policy data collection has moved from Eurostat to the Directorate-General for Employment, Social Affairs and Inclusion. When the 2012 data has become available (expected during the last quarter of 2014), this article presenting 2011 data will be removed from the online Eurostat yearbook and moved to the Statistics Explained archive. 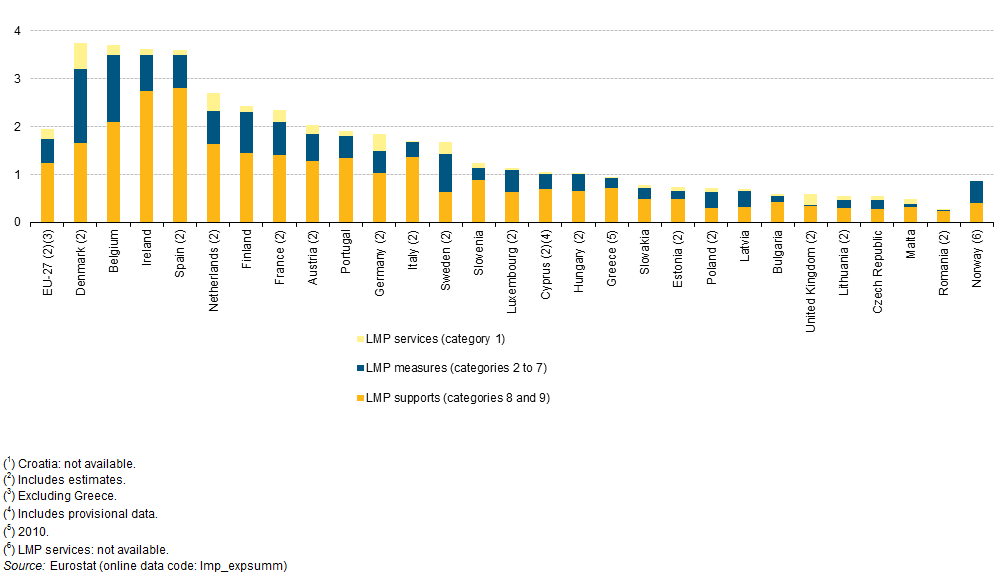 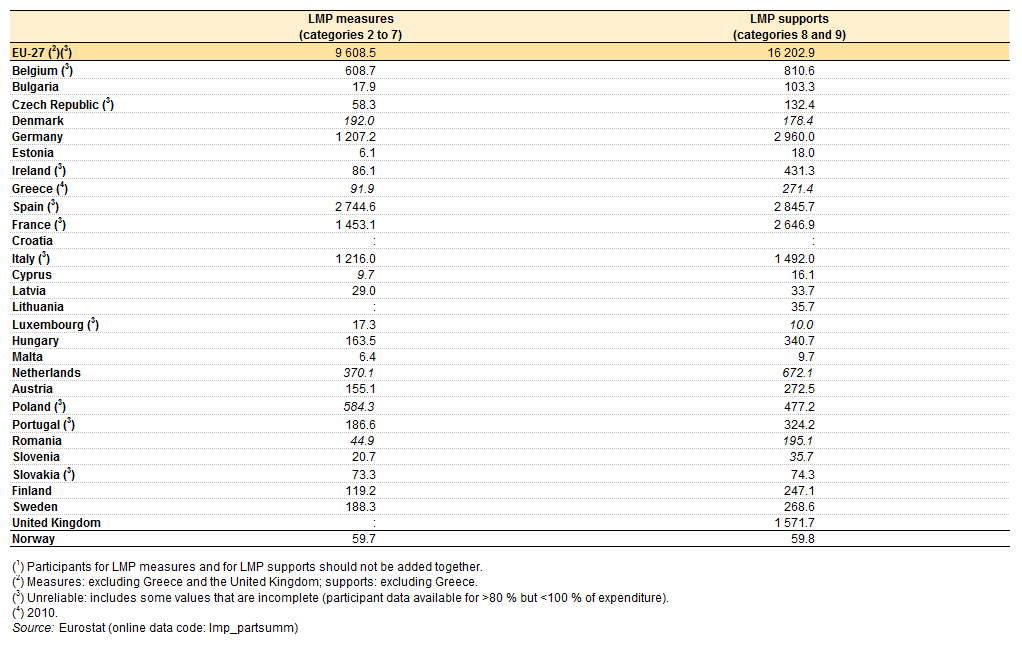 This article presents statistics on labour market policy (LMP) interventions. LMP interventions cover the range of financial and practical support offered by governments to people who are unemployed or otherwise disadvantaged in the labour market.

Across the EU-27, an average of just under 2 % of gross domestic product (GDP) was spent on LMP interventions in 2011; these latest figures for the EU average exclude data for Greece. The level of expenditure as well as the analysis of both expenditure and participants between the different types of LMP intervention varied considerably between EU Member States, reflecting the diverse characteristics and problems within national labour markets, as well as the different policies of respective governments. The highest levels of relative expenditure on LMP interventions in 2011 were reported in Denmark and Belgium (both corresponding to 3.7 % of GDP), followed by Ireland and Spain (both 3.6 % of GDP) — these were the only EU Member States to spend more than 3.0 % of their GDP on such interventions. At the other end of the scale, 10 Member States spent less than 1.0 % of GDP on these interventions: Slovakia, Estonia, Poland, Latvia, Bulgaria, the United Kingdom, Lithuania, the Czech Republic, Malta and Romania.

LMP interventions can be classified as being of a ‘services’ nature (such as the provision of information and guidance about jobs), of a ‘measures’ nature (such as training and employment incentives) or of a ‘support’ nature (such as early retirement and out-of-work income maintenance). The vast majority (63.4 %) of expenditure on LMP interventions across the EU-27 (excluding Greece) in 2011 was directed to LMP supports, a further quarter (25.7 %) being directed to LMP measures and the remainder (10.9 %) to LMP services. Relative to GDP, Spain spent the most on LMP supports (2.8 %) — with Belgium and Ireland the only other countries to spend more than 2.0 %. Denmark and Belgium spent the most on LMP measures (1.5 % and 1.4 % of GDP respectively), and Denmark (0.5 % of GDP), the Netherlands (0.4 % of GDP), and Germany (0.3 % of GDP) spent the most on LMP services.

Public expenditure on LMP measures was equivalent to 0.5 % of GDP across the EU-27 in 2011 (excluding Greece). The largest part of this expenditure (see Figure 2) went on training (40.0 %), just under a quarter (24.5 %) on employment incentives, and a little over a quarter on the combined expenditure on supported employment and rehabilitation (16.3 %, on measures that promote the labour market integration of people with reduced working capacity) and direct job creation (11.4 %, on the provision of temporary jobs that are additional to normal market supply).

All data presented in this article were extracted from the Eurostat LMP database. These data are collected annually from administrative sources in each country.

LMP services cover all services and activities of the Public Employment Services (PES) together with any other publicly funded services for jobseekers. Services include the provision of information and guidance about jobs, training and other opportunities that are available, and advice on how to get a job (for example assistance with preparing CVs or interview techniques).

LMP measures cover interventions that aim to provide people with new skills or experience of work in order to improve their employability or that encourage employers to create new jobs and take on unemployed people and other target groups. Measures include various forms of intervention that "activate" the unemployed and other groups by obliging them to participate in some form of activity in addition to a basic job search, with the aim of improving their chances of finding regular employment afterwards. They are mostly short-term and temporary actions although on-going support for jobs that would otherwise not be sustained in the regular labour market is also covered.

LMP supports cover financial assistance that aims to partially compensate individuals for a loss of wages or salary and to support them during their job-search (in other words mostly unemployment benefits) or which facilitates early retirement for labour market reasons.

The three main types of intervention are further broken down into nine detailed categories according to the type of action:

More recently, LMP statistics have been used as one of the sources of data for monitoring the EU employment guidelines through the Europe 2020 Joint Assessment Framework (JAF). The JAF is an indicator-based assessment system developed and used by the European Commission and the Employment Committee. Organised into 12 policy areas, the JAF includes a series of indicators used to monitor the progress towards EU headline targets and associated national targets in relation to the implementation of the employment guidelines. Data from Eurostat’s LMP database are used to calculate indicators for policy area 3, which is related to active labour market policies, and for policy area 4, which is related to adequate and employment-oriented social security systems.