(Redirected from Air pollution by industries and households)
Jump to: navigation , search

Next update of the article: February 2021

Between 2008 and 2017, emissions of acidifying gases (sulphur dioxide, nitrogen oxides and ammonia) in the EU decreased by 24 %.

This article is about emissions of acidifying gases and ozone precursor substances classified by emitting economic activities. Eurostat records and publishes those in air emissions accounts (AEA), one of the modules in the European environmental economic accounts (for which the legal basis is Regulation (EU) No 691/2011). AEA are suited for integrated environmental-economic analyses such as calculating emission intensities or 'footprints'.

The EU-27 emissions of ozone precursors (nitrogen oxides (NOx), methane (CH4), carbon monoxide (CO) and non-methane volatile organic compounds (NMVOC)) have also been falling over the past years. In 2017 the main contributors to the tropospheric ozone formation potential were NOx and NMVOC with 56 % and 32 % respectively.

Several air pollutants contribute to the acidification of the environment. The most important ones are discussed in this article and comprise sulphur dioxide (SO2), nitrogen oxides (NOx) and ammonia (NH3). The impact of SO2, NOx and NH3 can be observed in the progressive degradation of soils, water and forests. They also contribute to the formation of fine particles in the air that cause respiratory diseases. The acidifying potential of SO2, NOx and NH3 is commonly measured in SO2 equivalents (SO2-eq.). 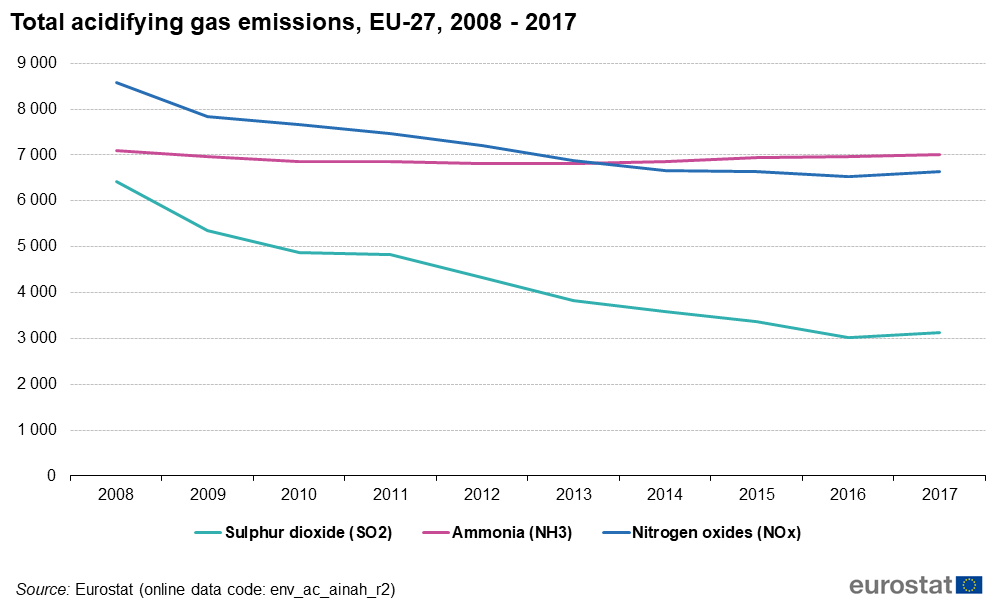 Agriculture, forestry and fishing account for the largest share of all industries: in 2017, these activities contributed 43.6 % of total acidifying gases emitted by industries and households (Figure 2). Ammonia was the largest contributor to the acidifying emissions from agriculture, forestry and fishing with 6.4 million tonnes of SO2-eq. (Figure 3). 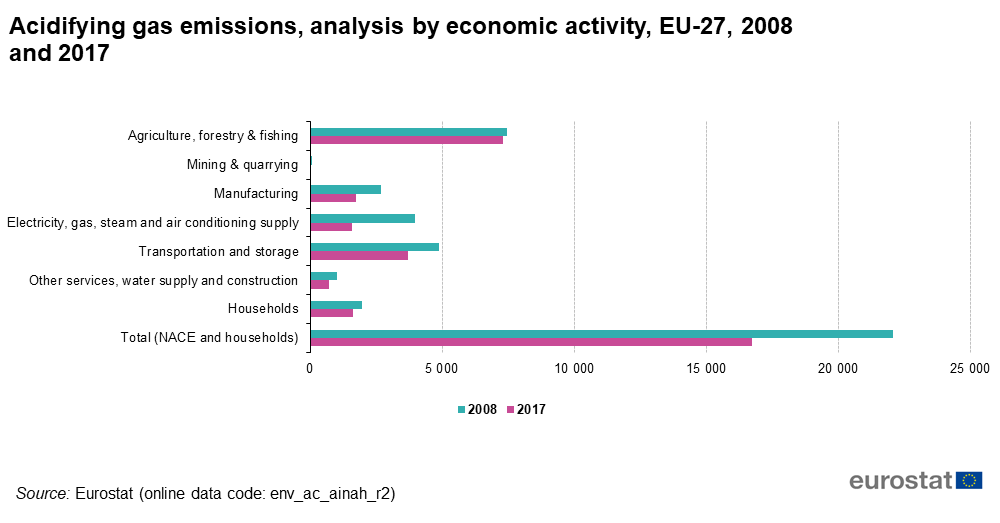 Most activities recorded significant drops in acidifying emissions. The biggest decrease was observed in electricity, gas, steam and air conditioning supply industry, which dropped from 4 to 1.6 million tonnes of SO2-eq. (60 %) between 2008 and 2017. A more systematic use of end-of-pipe pollution filters and the use of more efficient combustion technologies in the electricity and heat production are the main contributors to this development. 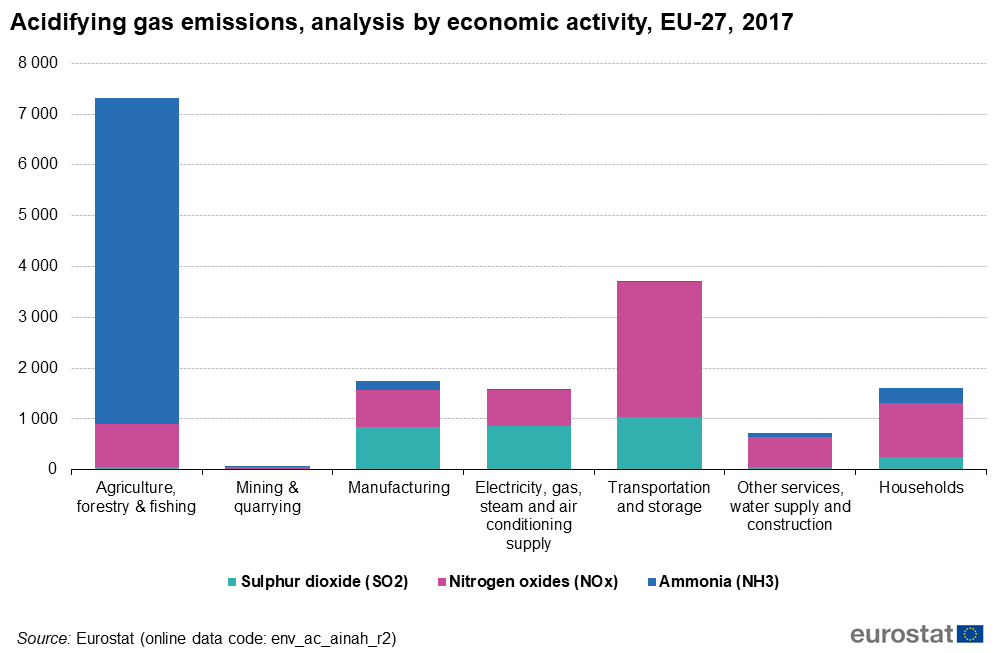 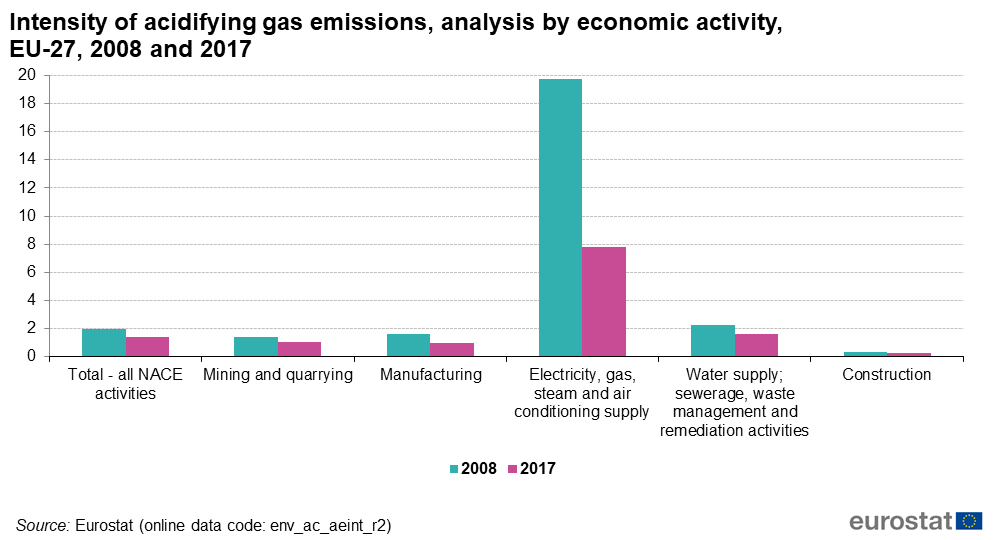 Figure 4: Intensity of acidifying gas emissions by economic activity, EU-27, 2008 and 2017
(grammes of SO2 equivalents per EUR) - Source: Eurostat (env_ac_aeint_r2)

Tropospheric ozone occurs when so-called ozone precursor substances (i.e. non-methane volatile organic compounds (NMVOC), nitrogen oxides (NOx), carbon monoxide (CO) and methane (CH4)) react in the lower atmosphere in the presence of sunlight. High ozone levels occur during the warmer summer months as the sun makes, for example, exhaust fumes from vehicles react in the lower atmosphere. High ozone levels are known to damage human tissue and are a health risk, especially for people with respiratory problems. Through the National Emissions Ceilings Directive (NECD) and the Gothenburg Protocol under UNECE-CLRTAP, the EU focuses on the emissions of NOx and NMVOC as they are the most relevant of the four pollutants. 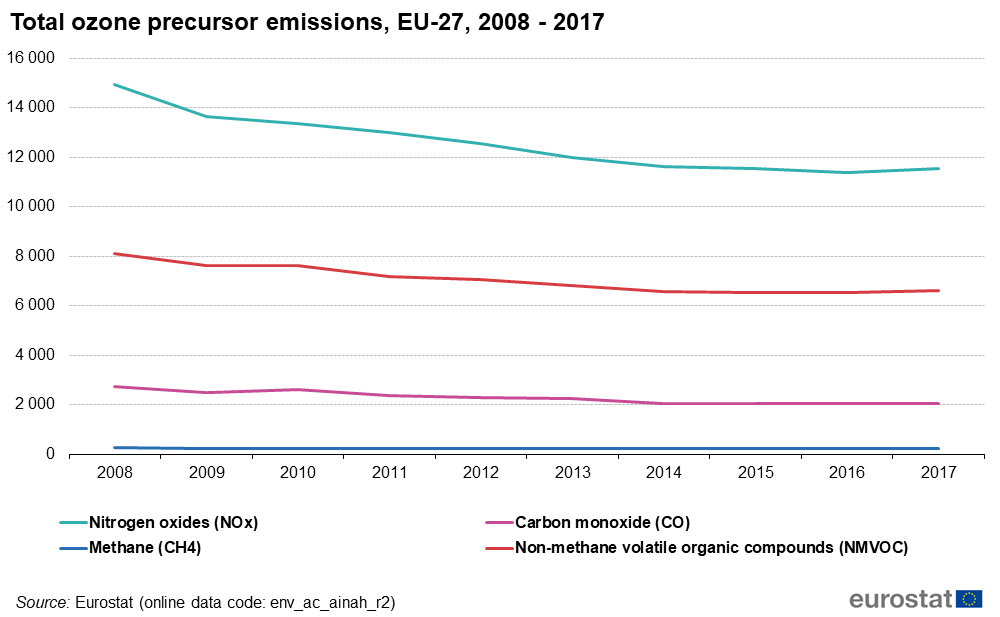 With 25.9 %, private households were the biggest contributor to total emissions of ozone precursors in 2017; closely followed by the transport industry with 24.4 % . The manufacturing industry was the third largest emitter with 17.6 % (Figure 6).

Between 2008 and 2017, the biggest absolute drop occurred in households (1.4 million tonnes of NMVOC-eq. or 21.2 %). For the same period the biggest relative drop was observed in electricity, gas, steam and air conditioning supply with 34 %. 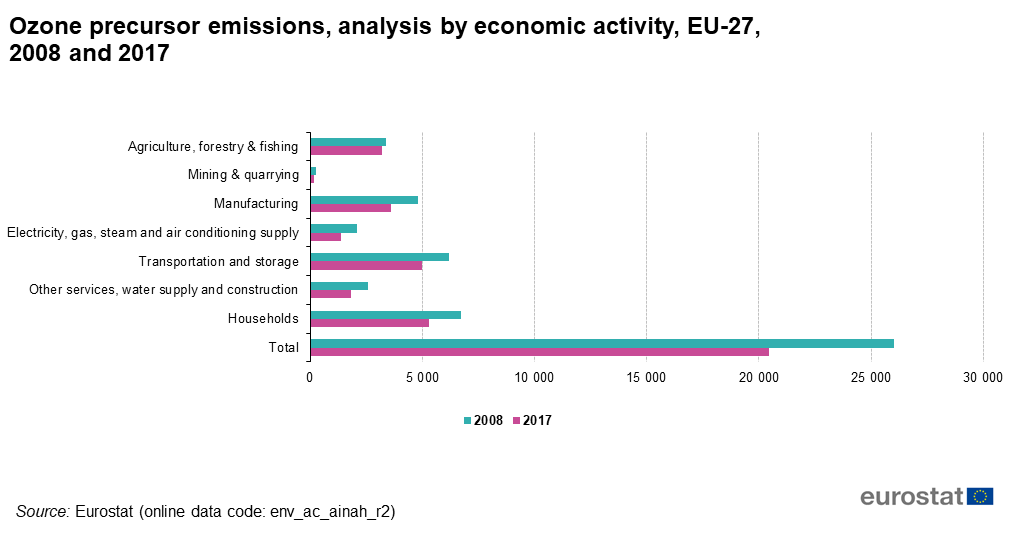 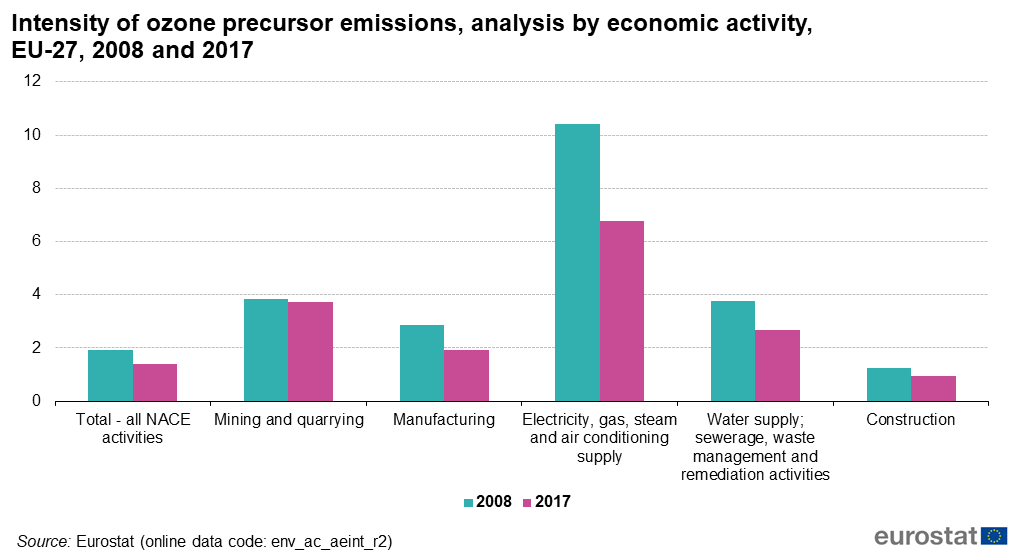 The basis for Eurostat’s air emissions accounts is Regulation (EU) No 691/2011 on European environmental economic accounts.

In air emissions accounts, emission data are organised by economic activity, using NACE. This makes it possible to have an integrated environmental-economic analysis to supplement national accounts. Economic activities encompass production by all businesses resident in a country, including those operating ships, aircraft and other transportation equipment in other countries.

The need to supplement information on the economy with environmental indicators has been recognised in a European Commission Communication titled 'GDP and beyond'COM(2009) 433). Furthermore, similar recommendations have been made within the Report by the Commission on the Measurement of Economic Performance and Social Progress,the so-called Stiglitz report. The recommendations support the expansion of the statistical understanding of human well-being by supplementing economic indicators such as GDP with additional information, including physical indicators related to the environment.