Austria, Latvia and Hungary recorded the highest increase in air passenger transport among the EU countries in 2019. 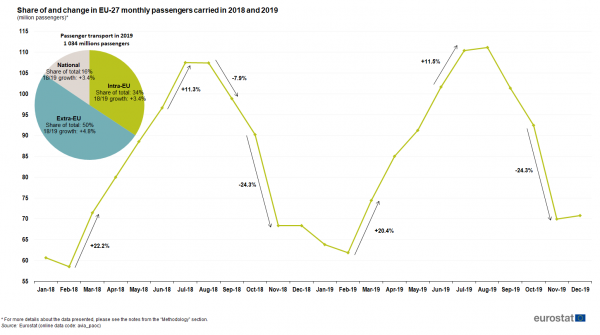 Share of and change in EU-27 monthly passengers carried in 2018 and 2019 (million passengers).
For more details about the data presented, please see the notes in the 'Data sources and availability' section.
Source: Eurostat (avia_paoc)

This article describes the recent monthly development of passenger transport by air in the European Union (EU). A distinction is made between national (domestic), intra and extra-EU transport, and the article also looks at the importance of airports.

Analysing passenger transport at country level generally confirms the upward trend observed in 2018 and 2019 at EU level, although transport development varies significantly depending on the country considered. For 2019, 24 out of the 27 Member States and 5 extra-EU reporting countries showed an increase in passenger volumes compared with the same period in 2018. Particularly notable is the growth observed for Austria (+14.5 %), Latvia (+10.6 %) and Hungary (+10.0 %) among the EU Member States. At the other end of the scale, decreases were observed in passenger transport for Slovenia (-5.1 %), Bulgaria (-3.5 %) and Sweden (-3.4 %). 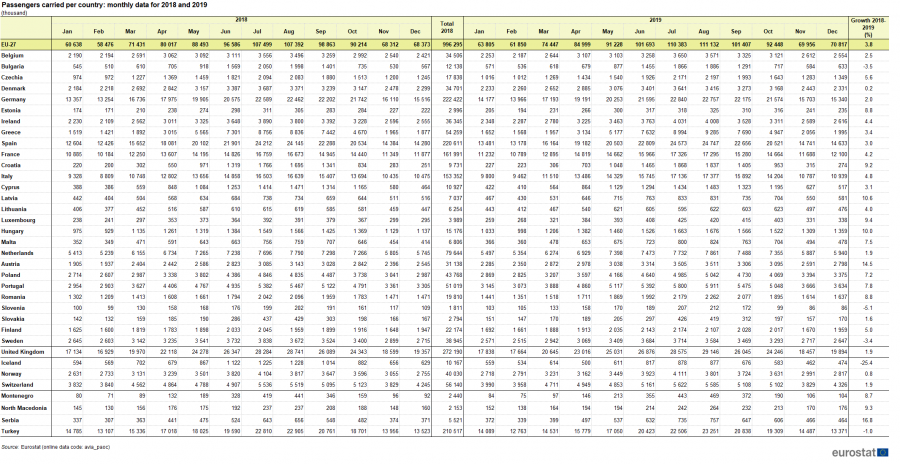 Among the top 30 airports in terms of passenger transport, growths between 2018 and 2019 also differ substantially depending on the airport considered, reflecting the trends observed at country level. For 2019, 25 out of the top 30 airports showed an increase over this period. Milano/Malpensa (+18.9 %) and Wien/Schwechat (+17.1 %) registered the highest rises among the largest airports, followed by Berlin/Tegel (+10.2 %). This contrasts with Stockholm/Arlanda and Köln/Bonn airports, where passenger transport decreased by 4.5 % for both airports between 2018 and 2019 - see Table 2.

All passengers on a particular flight are counted once only and not repeatedly on each individual stage of that flight. This excludes direct transit passengers.

The content of this statistical article is based on data collected within the framework of the EU air transport statistics Regulation (EC) No 437/2003 on statistical returns in respect of the carriage of passengers, freight and mail by air.

The basic legal act was amended by: