null Aquaculture in the EU

Print Aquaculture in the EU 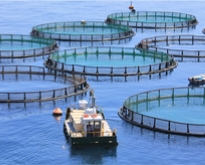 Aquafarming in the European Union (EU) produced an estimated 1.4 million tonnes live weight (TLW) of aquatic organisms in 2017. This represented one fifth of the EU’s total fishery production in 2017, a share that was similar to that in 2008. However, the value of aquaculture was more significant as it represented 41% of the total value of the EU’s total production of fishery products in 2017, up 7 percentage points from 2008.

Aquaculture, also known as aquafarming, refers to the farming of aquatic (freshwater or saltwater) organisms, such as fish, molluscs, crustaceans and plants, under controlled conditions. In the EU, just over 90 % of aquaculture production is from farming six commercial species: salmon, trout, oysters, seabass, gilthead seabream and mussels. Aquaculture statistics complement the data on the capture of wild fish available from fish catch statistics and fish landings.

The different aquatic organisms fetch different prices. For instance, average first sale prices for salmon and seabass are around 6 €/Kg, gilthead seabream around 5 €/Kg, while average prices for mussels are below 1 €/Kg. Among Member States, the United Kingdom had the highest value of aquaculture output in 2017(€1 283 million in value), representing one quarter of the EU total. The value of output was next highest in France (at €764 million, or 15% of the EU total), and then in Spain (€578 million, 11%), Greece (€546 million, 11%) and Italy (€543 million, 11%).

The aquafarming production of Atlantic salmon in the EU was the most valuable commercial species in 2017, accounting for about one quarter of the value of total aquaculture output. The value of trout output was the next highest, around 14% of the total value, followed by oysters, European seabass and seabream (10% each), and mussels (8%).

Aquaculture is highly specialised at regional and country level and is strongly influenced by geography and the natural habitat of species. In terms of value, the United Kingdom was the main producer of salmon (89% of total EU salmon production), whilst France was the main producer of oysters (86% of total EU oyster production) in 2017. Greece produced just over one half (53%) of the total EU production of gilthead seabream as well as European seabass (51%), while the leading EU producers of mussels were France (32% of total EU mussel production) and Spain (31%).