How closely do people live together in your region?

Print How closely do people live together in your region? 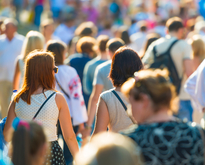 From the large forest and mountain regions in the Nordic countries to the sprawling life in the inner cities, there are large differences in how close together people live across the regions in the European Union (EU). The social distancing measures imposed across Europe to limit the spread of the coronavirus are particularly critical in regions with high population density, where it is difficult to go outside, go shopping or use public transport without getting close to your fellow citizens.
Eurostat has taken a closer look at the population density across the NUTS 3 regions of the EU. In large parts of the Nordic countries, in the Baltic countries and across large swathes of the Iberian Peninsula and central France, there are few inhabitants per square kilometre.
In contrast, in and around most capitals and other large economic centres, there tends to be a high number of people living within the limited geographical area of the region. 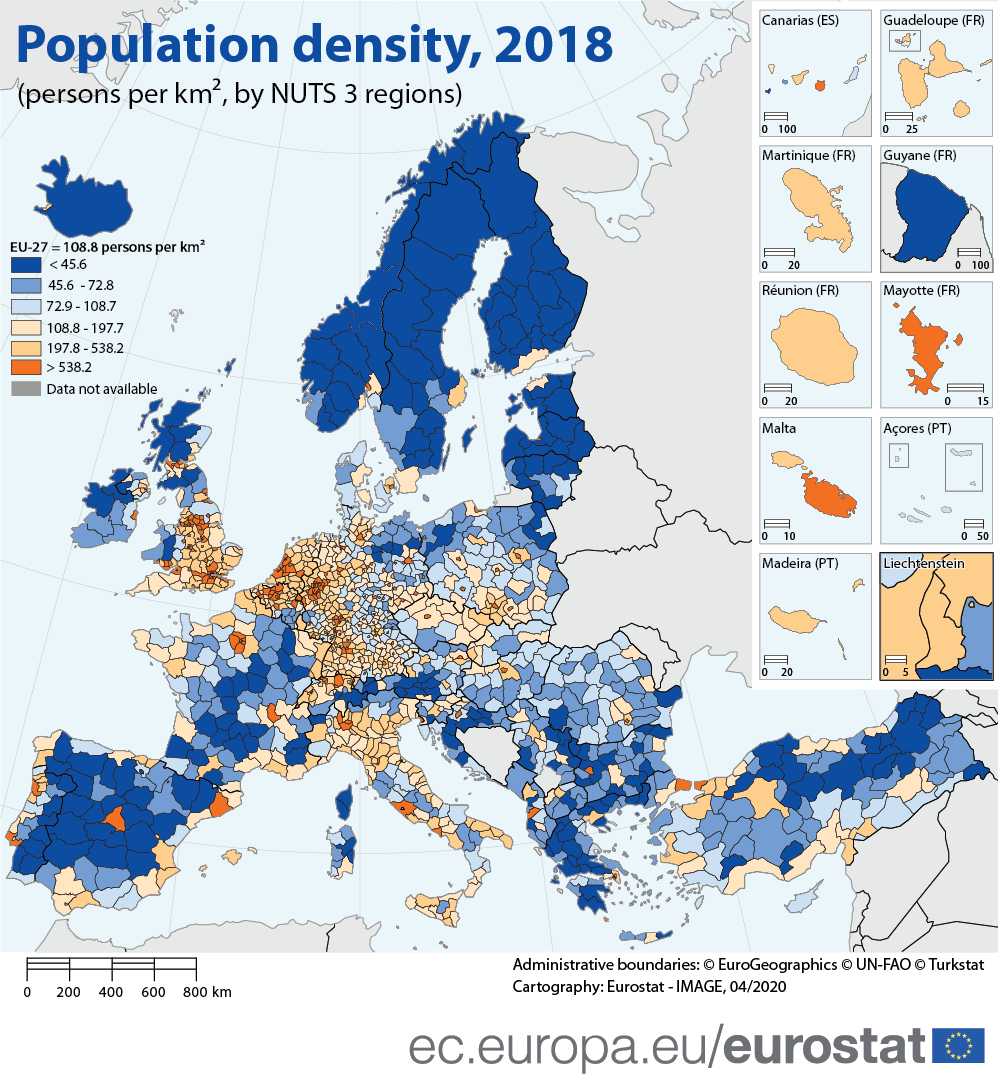 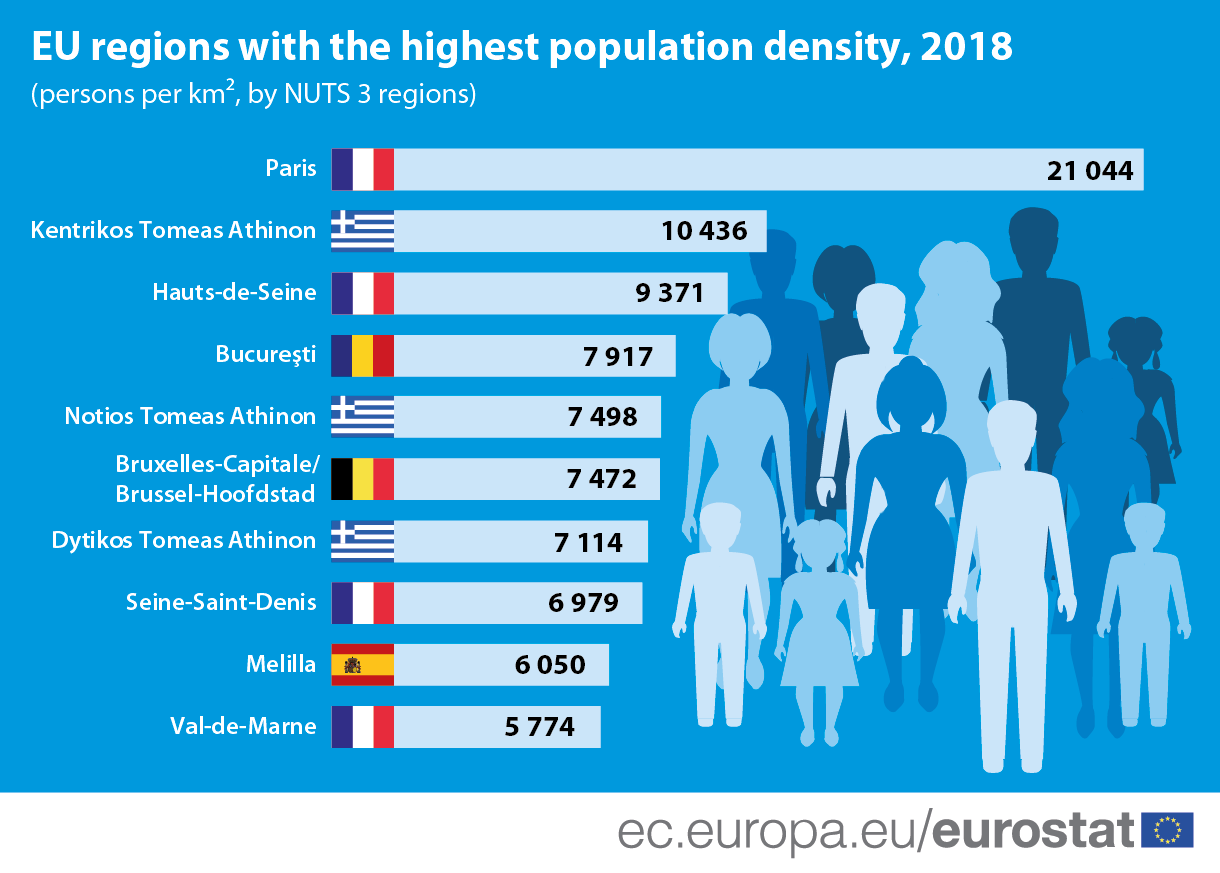 Data source: demo_r_d3dens
It should be noted that population density is also dependent on the size of the spatial unit studied. For example, at a very detailed level, the most densely populated square kilometre in the EU lies in the south-western suburbs of Barcelona, within L’Hospitalet de Llobregat (53 119 inhabitants/km² in 2011). It is followed by the 18th arrondissement in Paris, not far from the Basilica of Sacré Cœur (52 218 inhabitants/km²) and Badalona in the north-east suburbs of Barcelona (50 287 inhabitants/km²).
Lapland in Finland, the region with the fewest inhabitants per km2
The large forest regions and barren subarctic regions in Finland and Sweden feature heavily in the list of the ten regions in the EU with the fewest inhabitants per km2 in 2018.
Lapland (Lappi), the northernmost region of Finland, only counted 2 inhabitants per km2. Its neighbouring region across the border in Sweden, Norrbottens län, counted 3 inhabitants per km2, just as another Swedish region, Jämtlands län, and the French overseas region Guyane. 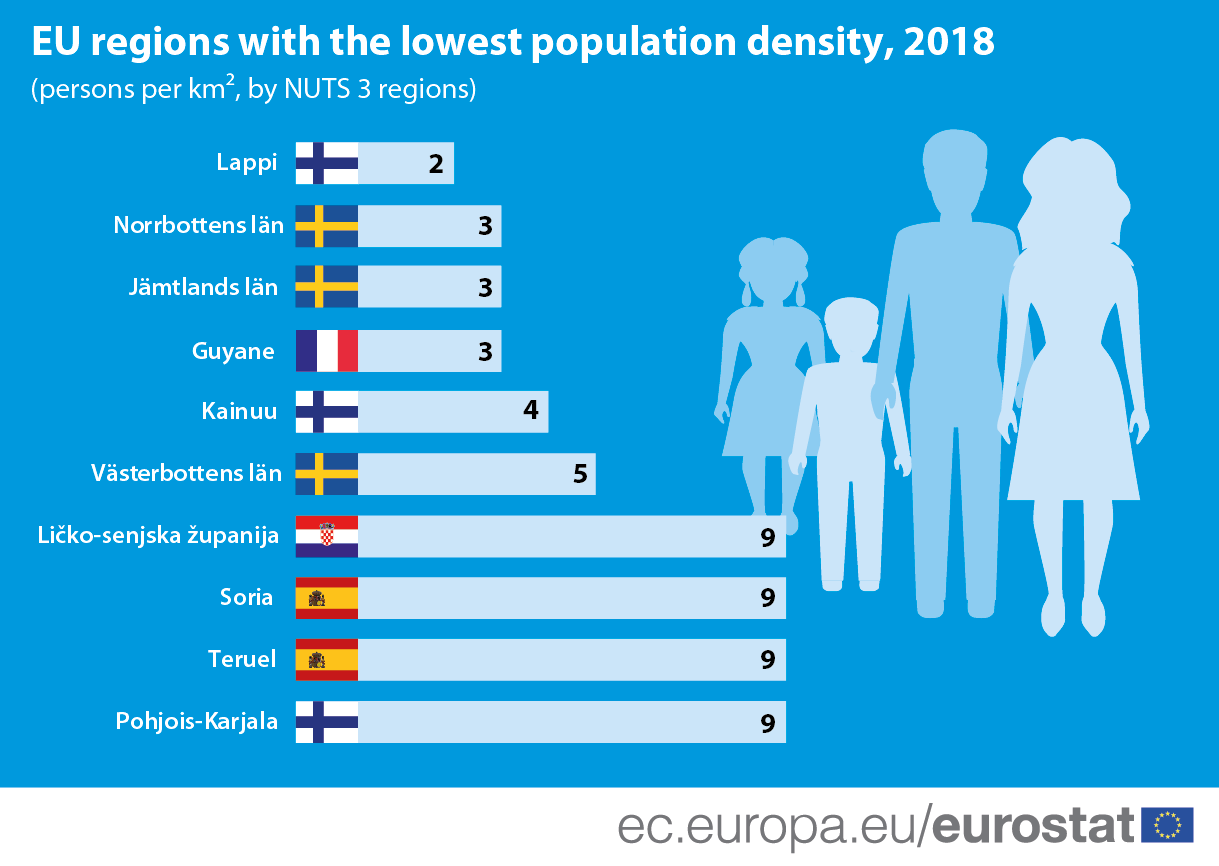 Data source: demo_r_d3dens
Further Swedish and Finnish regions followed: Kainuu (4 inhabitants per km2), Västerbottens län (5) and Phjois-Karjala (9). There were only 9 inhabitants per km2 in the Croatian Lika-Senj County (Ličko-senjska županija) as well as in the Spanish regions Soria and Teruel.
For more information, take a look at the overview of statistics on regions and cities.
Notes: