March 15 is widely considered as the starting date of the Syrian uprising, back in 2011. But today marks a tragic anniversary: three years of deprivation and suffering. Since this fateful day, the uprising has evolved into a full-blown civil war which has killed tens of thousands, displaced over 6.5 million people inside the country, and forced over 2.5 million to flee for their lives beyond the borders.  This means that over nine million Syrians have been uprooted from their homes - more than the populations of Croatia and Ireland combined.  According to the UN, it makes Syria the " biggest humanitarian and security crisis in the world”.

The humanitarian consequences have reached an unbelievable scale with an estimated 9.3 million people inside the country requiring assistance. Of those, an estimated 3 million people remain trapped inside areas which so far have seen little or no aid. Reports indicate starvation and the reappearance of the dreaded Polio virus. Those who were lucky enough to cross the border to safety are now living in hardship; struggling to find shelter and food for their families and schooling for their children. Furthermore, an entire generation of children have been exposed to war, violence and death, and have been deprived of their basic freedoms, protection and education. The EU and its Member States have thus far provided over €2.6 billion to assist Syrians inside their country, as well as to refugees and their host communities. The humanitarian community has launched a vast action to prevent a loss of an entire generation of children. The No Lost Generation action, wholeheartedly supported by the EU, aims at focusing on education and protection programmes to help Syrian children escape misery, isolation and trauma.

The recent UN Security Council Resolution 2139 on humanitarian assistance gives hope that the vulnerable will become more accessible so that food, water, shelter and medical care will reach all those in need inside the war-ridden country. This said, the only viable relief from the past three years of misery and grief is a cessation of all violence and a sustainable political solution to the crisis. Only when this happens can the Syrian people return to their homes and rebuild their country. In the meantime, the European Commission's Humanitarian Aid and Civil Protection department (ECHO) will remain committed to assisting those affected by this terrible crisis. 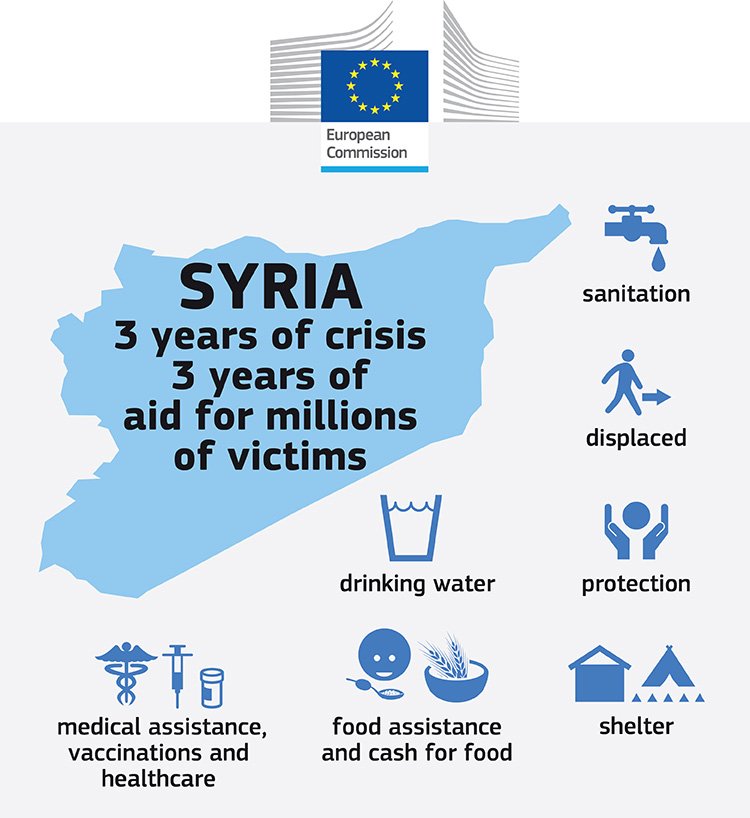 What are the needs?

The humanitarian situation has deteriorated dramatically in recent months. In neighbouring countries, the number of refugees has now reached over 2.5 million, registered and awaiting registration, in Jordan, Lebanon, Turkey, Iraq, Egypt and North Africa. This number is continuing to rise as hostilities grow. The High Commissioner for Refugees office (UNHCR) predicts more than 4 million refugees from Syria by the end of 2014. The continuous influx of Syrians is increasing the burden on the host communities and is fuelling tensions in some areas. Countries bordering Syria are approaching a dangerous saturation point and they need urgent support to continue keeping borders open and assisting refugees. Assessment of the conditions of refugees living outside the camps is needed as well as humanitarian aid (especially shelter and water, hygiene and sanitation).

Emergency needs such as medical and food assistance, shelter and winterization have increased in the country. Treating and evacuating the wounded are a priority. Civilians attempting to flee from fighting need urgent assistance and protection. Beyond emergency needs, shortages of all kinds are affecting the civilian population, including growing fuel shortages.

Our priorities are to give aid to the displaced people in Syria and to give adequate assistance to the Syrian refugees hosted in other countries.

How are we helping?

Europe is the world's largest donor to the international response to the crisis. The European Commission has, since the end of 2011 and in direct response to the crisis, mobilised €615 million in humanitarian assistance for Syria and neighbouring countries. A further €526 million has also been mobilised through other EU instruments (i.e. for education, support to host communities and local societies), bringing the total funding from the EU budget to over €1.1 billion million. This includes the €165 million pledged at the International Pledging Conference on 15 January 2014 known as Kuwait II.

In addition, the EU Member States have provided over €1.1 billion in humanitarian aid to Syrians affected by the conflict which with the overall pledge at Kuwait II from Member States, brings the total EU contribution to over €2.6 billion.

ECHO funding is channeled through the Red Cross/Red Crescent movement, various INGOs and UN humanitarian agencies, including UNHCR and those whose mandate focuses on the protection and assistance of women and children, such as UNICEF, UNFPA and Save the Children.

Stories from the field